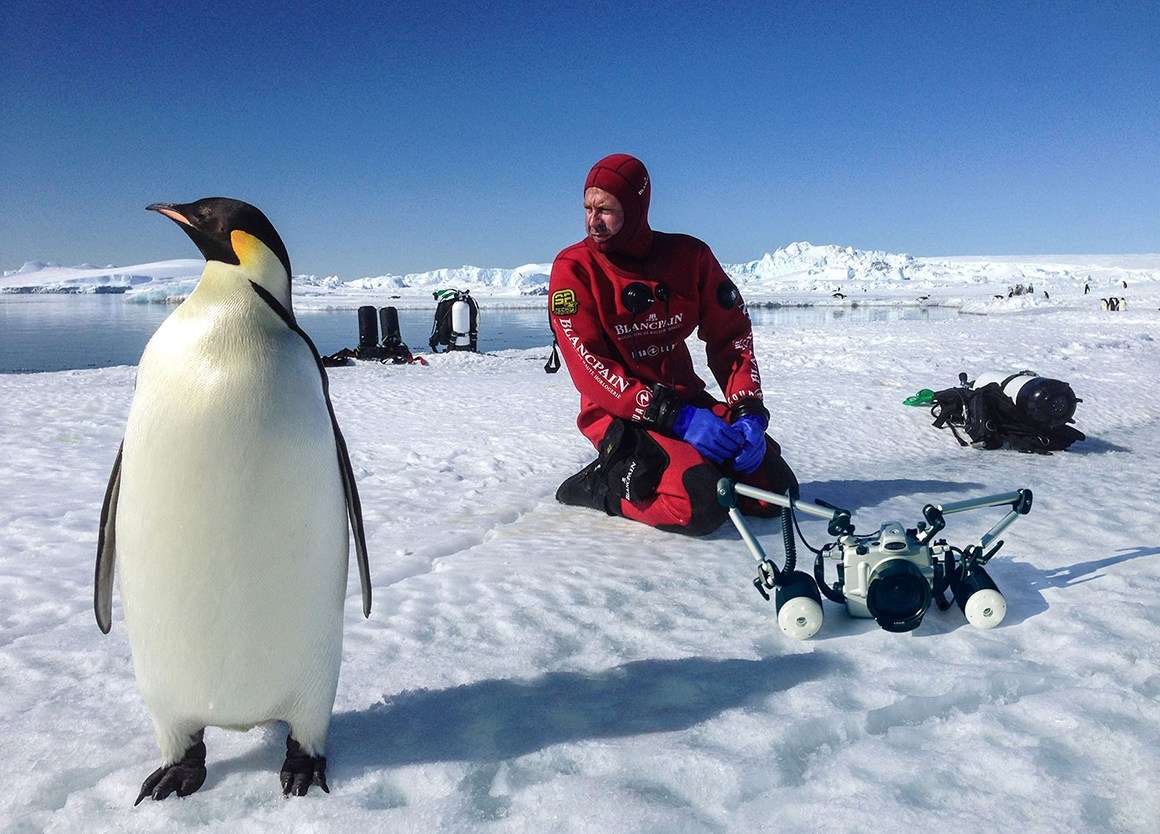 Photographer Laurent Ballesta in the field in Antarctica. © Thibault Rauby.

Behind the scenes of Wildlife Photographer of the Year

What does it take to capture life in the water? Three finalists from this year’s Wildlife Photographer of the Year competition talked to Paul Teasdale about how to navigate whale pods, ice, underwater jungles and extreme temperatures for that perfect shot.

Giant gathering, Tony’s winning image in the ‘Behaviour: Mammals’ category in this year’s Wildlife Photographer of the Year competition, was only possible after a career dedicated to carefully photographing and bonding with these social marine mammals. It took all of Tony’s experience and patience to finally witness and document the extraordinary group behaviour he had previously only read about in a handful of accounts.

‘I got this photograph by spending 20 years or so studying sperm whales,’ says Tony. ‘Learning about their society, making friends, being taken into their social gatherings, babysitting, having giant squid brought to me – all sorts of experiences culminated in this big gathering of several hundred, maybe even thousands of whales.’ 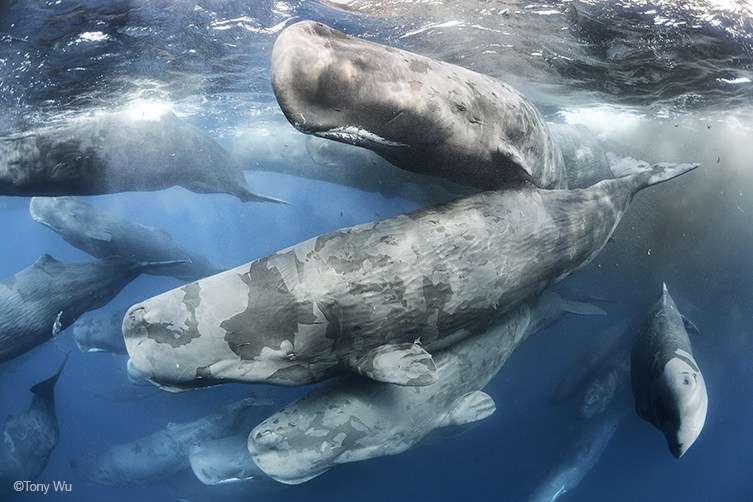 Tony Wu’s image of sperm whales, Giant gathering, took the prize in the ‘Mammals: Behaviour’ category. The sperm whales had just emerged from milling around in a gigantic cluster. © Tony Wu.

The gathering took place over two and a half days off the Sri Lankan coast. Although this window gave Tony plenty of opportunities to take photographs, one of his most important considerations was waiting for the right moment.

‘I didn’t actually enter the water that often. It’s important to observe. You need to understand what the whales are doing. I didn’t take many photos. Once I got into the water I was taking photos, but the process was to wait and see, slip in at the right place, take the 10-15 photos required and then get out of there.’

Although it is highly unlikely that a sperm whale would intentionally harm a swimmer, when in such a large group Tony needed to pick the right moment to enter the action. 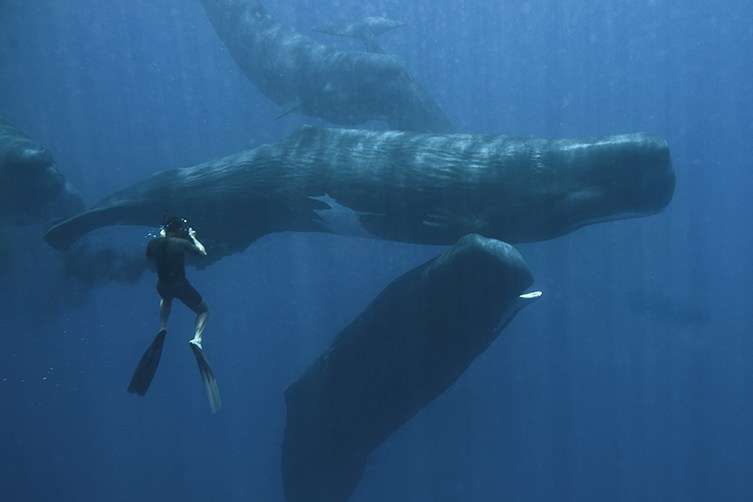 Tony in the field, documenting the extraordinary behaviour of a large group of sperm whales in the Indian Ocean. © Jenny Huang.

He says, ‘Personal safety with such big animals is a real risk. More and more people are trying to get into the water with whales and there is an issue with that, if they don’t know what they’re doing.

‘Being in the midst of wild animals is always going to be something that requires good judgement. There are body parts flying everywhere and if you can’t move quickly you are putting yourself at risk.

‘I train all year in order to be as fit as possible to manoeuvre in the water with these animals. It’s like anything else – you’ve got to dedicate yourself to it. Learn about the animals and get yourself in shape.’

Michel Roggo: ‘All the colours you can imagine exist in freshwater.’

Upstream, in unexplored shallows of freshwater rivers and lakes, Michel Roggo can often be found working just beneath the surface. He has dedicated his career to uncovering the freshwater environments that are just out of sight. His striking image, Freshwater Eden, features a tangle of water hyacinths. It is a finalist in the ‘Plants and Fungi’ category of this year’s competition.

In a tributary of Brazil’s vast Pantanal region, Michel set out to capture the world’s largest tropical wetland. He says, ‘Freshwater is far too often out of sight and out of mind. I think it is vital to show these environments to the world. The Pantanal is like an underwater jungle, very dense and chaotic.’

‘I wanted to capture the essence of this jungle, but in this environment, photography can be very challenging. You have to contend with a whole lot of muddy water and material. There are some clear rivers, but it really isn’t easy.’ 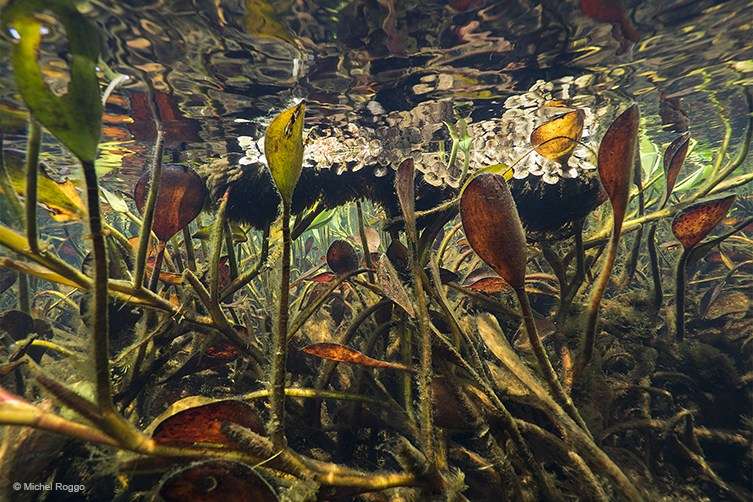 Freshwater Eden, Michel Roggo’s composition of water hyacinths in the Pantanal, Brazil, was a finalist in the ‘Plants and Fungi’ category of this year’s Wildlife Photographer of the Year. © Michel Roggo.

And the clarity of the water isn’t the only challenge: there is also the matter of manoeuvring through the undergrowth.

‘Diving in this part of the Pantanal is not an option due to the density of material,’ says Michel, ‘but snorkelling is a dream in 34°C. I stayed in the water up to six hours a time, taking lots of images. There aren’t that many people working in freshwater. The visibility and light is often a real challenge. Currents can be difficult too.’

‘It’s very different to work in the sea. If you go and take photographs in the Red Sea, for example, there will usually be excellent visibility and sunlight overhead – clear conditions. It can be hard to find this in freshwater habitats.’ 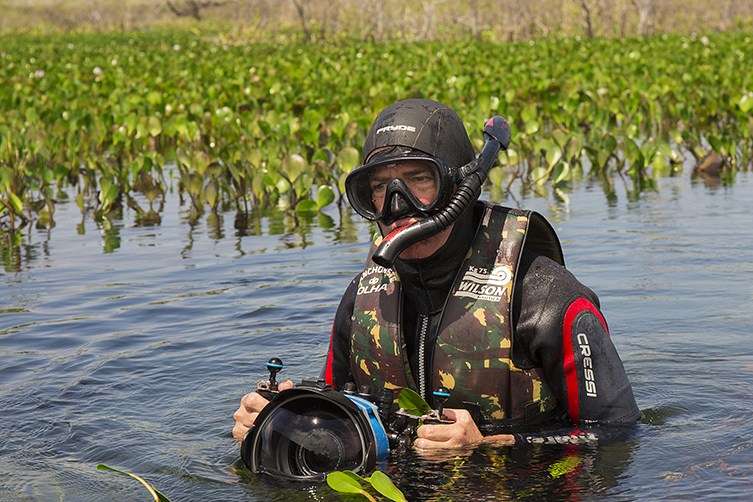 Michel Roggo in the field with his snorkel and camera equipment in the Pantanal, the world’s largest tropical wetland. © André Riedo.

However, for Michel, with these challenges come exciting opportunities: ‘There is a huge diversity of colours in freshwater environments. The sea can often be dominated by the colour blue. Here you have greens, browns, oranges and greys – all the colours you can imagine exist in freshwater.’

‘I took a lot of photographs in the Pantanal, but when it came to Wildlife Photographer of the Year I knew that Freshwater Eden would be the one. Maybe it’s not technically perfect, but I feel that it captures the spirit of the place. It’s powerful.’

Laurent Ballesta: ‘As an underwater photographer you can never embrace a large landscape in one view.’

Plunging into the icy waters on the Antarctic coast, photographer Laurent Ballesta was planning to photograph a giant. Trapped above by the surrounding ice field, the iceberg floated safely just above the seafloor. Creating his image, The ice monster, winner in the ‘Environments’ category, was a painstaking process in these extreme underwater conditions.

Laurent says, ‘It took us three days to make the photo. It was so painful.’ 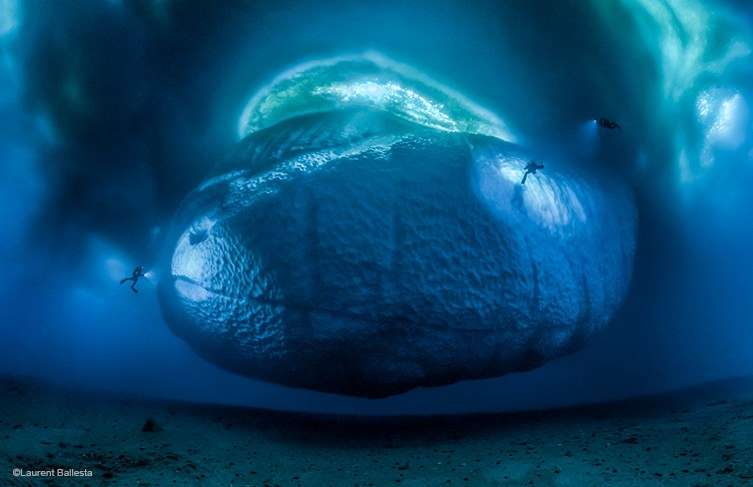 The ice monster by Laurent Ballesta is made up of dozens of photographs carefully stitched together. It won in the ‘Environments’ category of this year’s Wildlife Photographer of the Year. © Laurent Ballesta.

‘The water temperature was minus 1.8°C. If you fell into the water naked you would die in five minutes. It’s so cold that it’s hard to stay down there, even with dry suits, even with electric heaters.’

The great challenge Laurent faced was creating an image on such a large scale with limited visibility underwater, without succumbing to the cold. He says, ‘As an underwater photographer you can never embrace a large landscape in one view.’

To overcome this challenge, Laurent built his landscape across multiple images. After several hours of checking the location and preparing the shots, he and his team were ready. Using a wide-angle lens and working for many hours, they snapped 147 images. 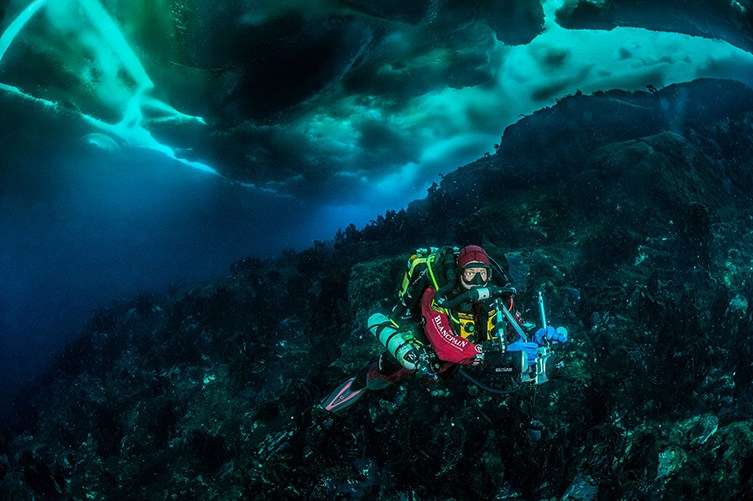 Laurent in the field under the Antarctic ice. He and his team faced water temperatures of minus 1.8°C. © Thibault Rauby.

The Antarctic temperature was not the only challenge they faced. Laurent and his team were working at incredible depths to photograph the iceberg. ‘Deep dives mean a lot of decompression,’ says Laurent. Each time the team returned to the surface they had to decompress to avoid decompression sickness, before returning to the depths to continue working. Once the shooting was complete, the images were carefully stitched together.

Despite its challenges, documenting previously unexplored underwater environments is a thrill that drives many photographers. ‘We still only know about 10% of the biodiversity underwater. This is very exciting,’ says Laurent.

The 53rd Wildlife Photographer of the Year exhibition, showcasing the world’s best nature photography – including images by Tony, Michel and Laurent – is now open. Book your ticket here.

View all posts by Guest→
Posted in: Exhibitions , Wildlife Photographer of the Year , Arts and Culture
↑