A scene from the Remembering Mabo rooftop projection showing Australia’s numerous First Nations and their many languages. Image: ANMM.

In 1992 the landscape of modern Australian politics and society was unsettled by a ground-breaking High Court case that ruled against the idea that before the Europeans arrived Australia was terra nullius (or ‘nobody’s land’). The decision led to the native title Act of 1993, which transformed the nature of the long struggle by Aboriginal and Torres Strait Islander people for the recognition of their land and ultimately, sea rights.

In 2017, the museum commissioned a work for a rooftop projection celebrating the 25th anniversary of the 1992 Mabo High Court decision. Eddie Koiki Mabo, was a Meriam man from the island of Mer (Murray Island) in the Torres Strait, between the tip of Cape of York, Queensland and Papua New Guinea. The rooftop projection Remembering Mabo is a visual story that follows Eddie’s life, connection to his country and his legal and political campaigns for the recognition of land rights. The story begins in Eddie’s homeland of Mer, then highlights his famous 1981 speech on his people’s beliefs about their long standing traditional ownership of the land. It then moves to the lengthy High Court case where Eddie was lead plaintiff along with other traditional landowners. 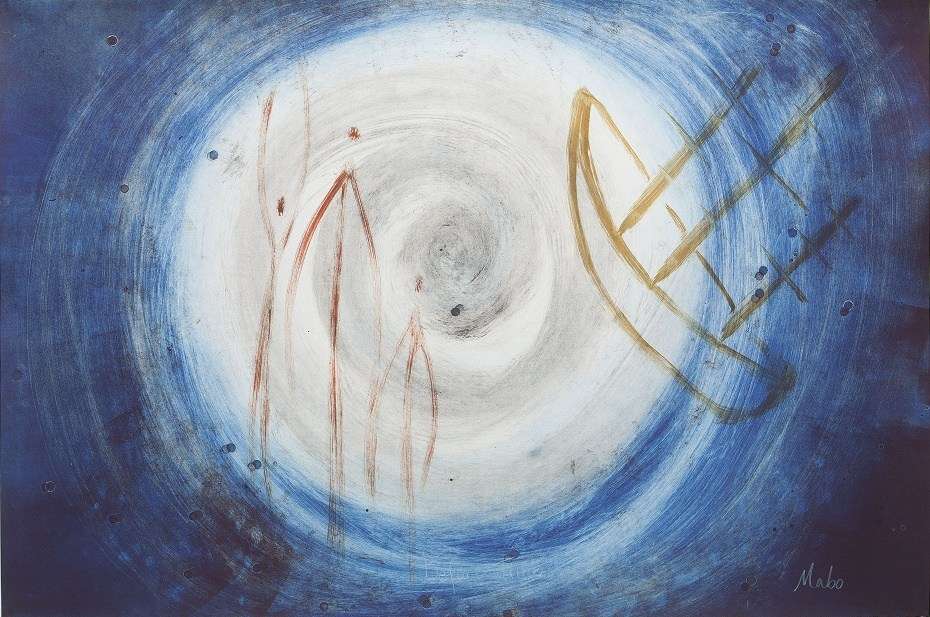 Constellation II, monoprint on paper by Gail Mabo. The image has three main elements; the swirling star constellation, ancestral spirit figures before the coming of the boats, and the boats which represent European occupation. ANMM Collection 00054383, © Gail Mabo/ Licensed by Viscopy, 2017. Purchased with funds from the Sid Faithfull and Christine Sadler program supporting Contemporary Indigenous Maritime Heritage in Far North Queensland and the Torres Strait Islands through the ANM Foundation.

The museum’s iconic rooftop that was inspired by sails and waves is a perfect backdrop for this powerful story that really began in the trade winds and crystal blue seas of the Torres Strait Islands. Remembering Mabo features Constellation II, an artwork by Eddie Mabo’s daughter Gail Mabo, which is part of the Australian National Maritime Collection. The rooftop projection was directed and animated by Gamilaraay artist Jake Duczynski in collaboration with Jono Delbridge. It is underpinned by an evocative original soundtrack by Oliver Hollenbach and Torres Strait Islander musician Mau Power.

Artist Jake Duczynski said, ‘It’s an honour and a privilege to deliver a projection that will remind the many people who visit Darling Harbour each evening about Eddie Mabo and what he and the plaintiffs achieved for Indigenous land rights; and that Indigenous voices will be heard, literally off the rooftops in Sydney’. 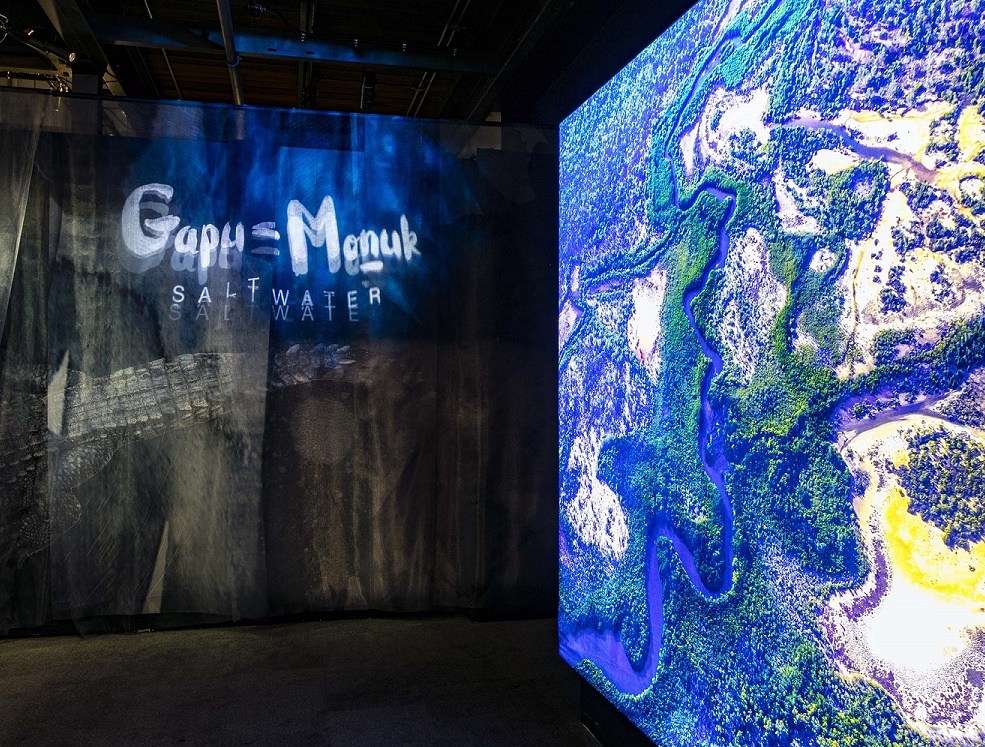 The entrance to the Gapu Monuk Saltwater exhibition, showing the diverse landscape of the Yilpara Saltwater Country, one of the homeland centres of Blue Mud Bay. Image: Andrew Frolows/ANMM.

Remembering Mabo complements the museum’s current exhibition Gapu-Monuk Saltwater. This exhibition shares how the Yolŋu people of northeast Arnhem Land fought for and won their case for Indigenous sea rights. The famous 1996 Blue Mud Bay legal case led by Djambawa Marawili AM, ceremonial leader of the Madarrpa clan in north-east Arnhem Land, was critical in the campaign to highlight that Aboriginal and Torres Strait Islander people also have traditional links to the rivers and oceans. Gapu-Monuk includes bark paintings from the museum’s Saltwater Collection some of which were used as evidence in the Blue Mud Bay case.

If you are in Sydney after dark over the next few weeks be sure to drop on down to Darling Harbour. Remembering Mabo will be screened along with the museum’s highly successful Waves of Migration projection from 26 January to 11 February 2018. The projections run in rotation from 8.30pm to 10.30pm each evening and are best viewed from Pyrmont Bridge and around the King Street Wharf area at Darling Harbour. 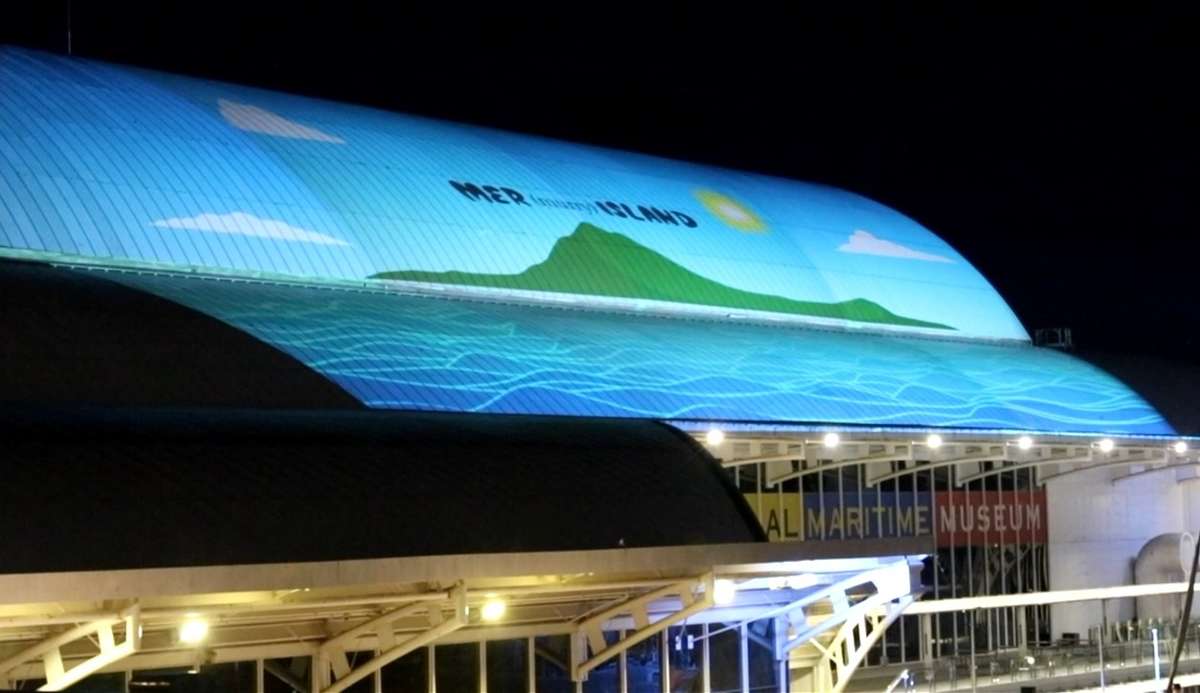 View all posts by Stephen Gapps→
Posted in: Events , Indigenous
↑