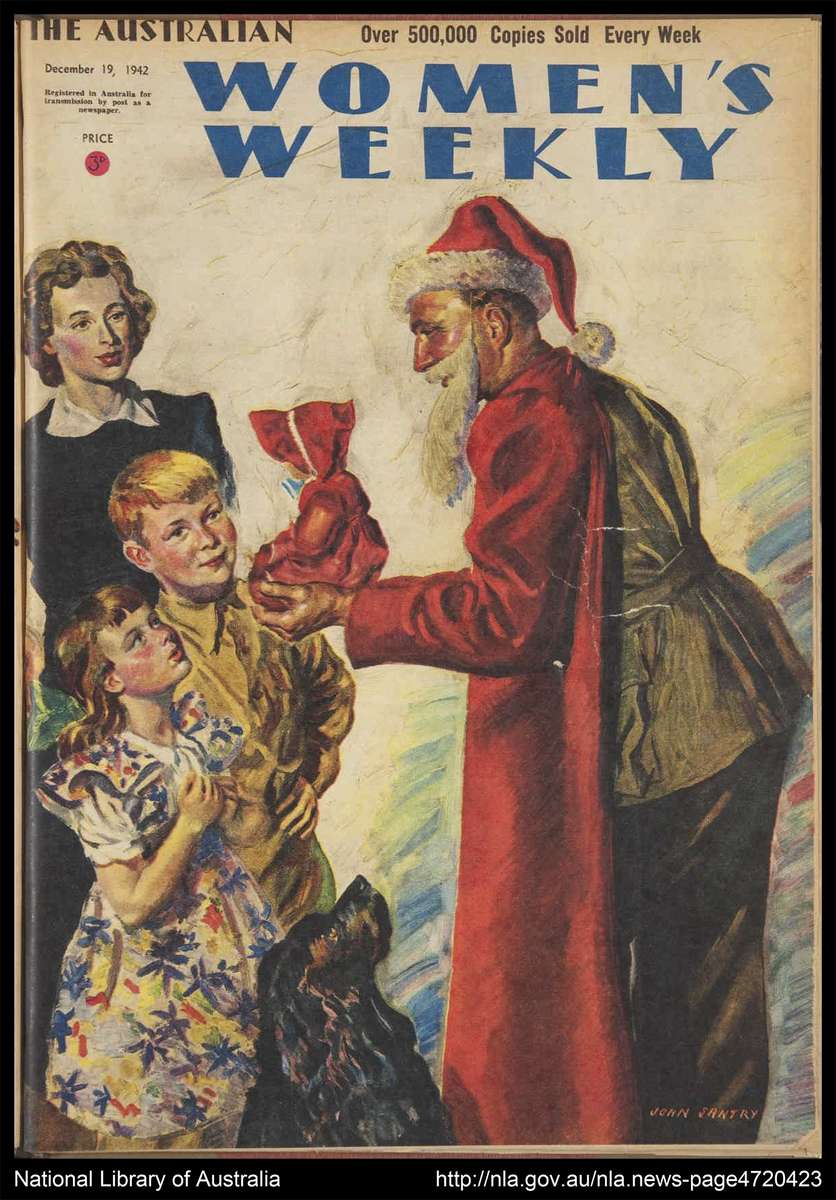 This Christmas Richard Wood, USA Programs Manager, turns back time to 1942 when the festive season in Australia and the USA faced austerity measures and missing family members during World War II but the spirit of the season persevered.

By Christmas 1942, the war had infiltrated every aspect of Australian life. The Christmas cover of the Australian Women’s Weekly featured combined Santa Claus with an absent military father figure.

In Alice Springs patients of the Australian Service Hospital might have received a Red Cross Christmas Bundle of treats and comforts including some Mottram’s Strathmore biscuits, a fruitcake, a tinned Christmas pudding, 6 packs of cigarettes, a bottle of Waltham barley sugars, playing cards, Brookes lime juice cordial, a packet of Jaffas, some drinking chocolate and red napkins. 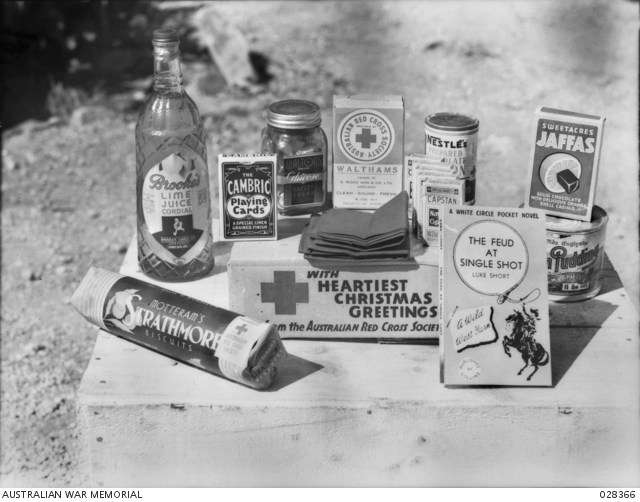 The contents of a Christmas gift parcel, presented by the Australian Red Cross Society to inmates of service hospitals on Christmas day. AWM Collection.

In Melbourne, kids were still kids. Despite their ‘austerity’ tree — glass for baubles and foil for tinsel were needed for the war effort  — the restrictions of war seem to have paled against the anticipation of Santa’s visit. 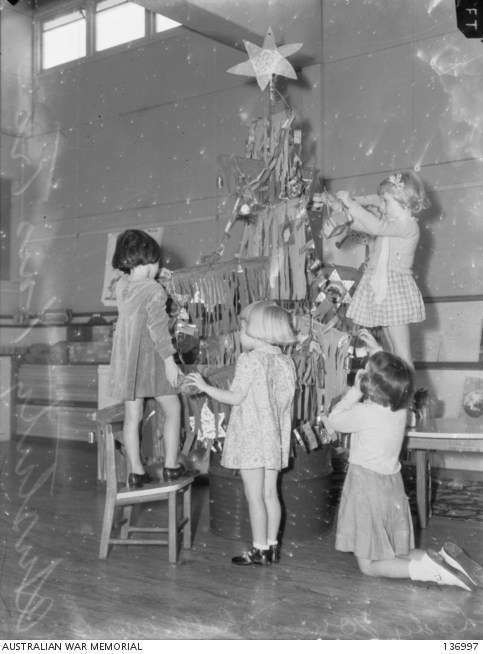 Four little girls decorate their austerity Christmas tree at a suburban school. The tree branches are constructed of sticks hung with fringed paper and foil stars are used as decorations. AWM Collection.

Also in Melbourne, young US First Division Marines recovered from the hell of Guadalcanal, visiting the sights and smelling the roses, as Aussies offered the troops home cooked meals in the spirit of camaraderie. 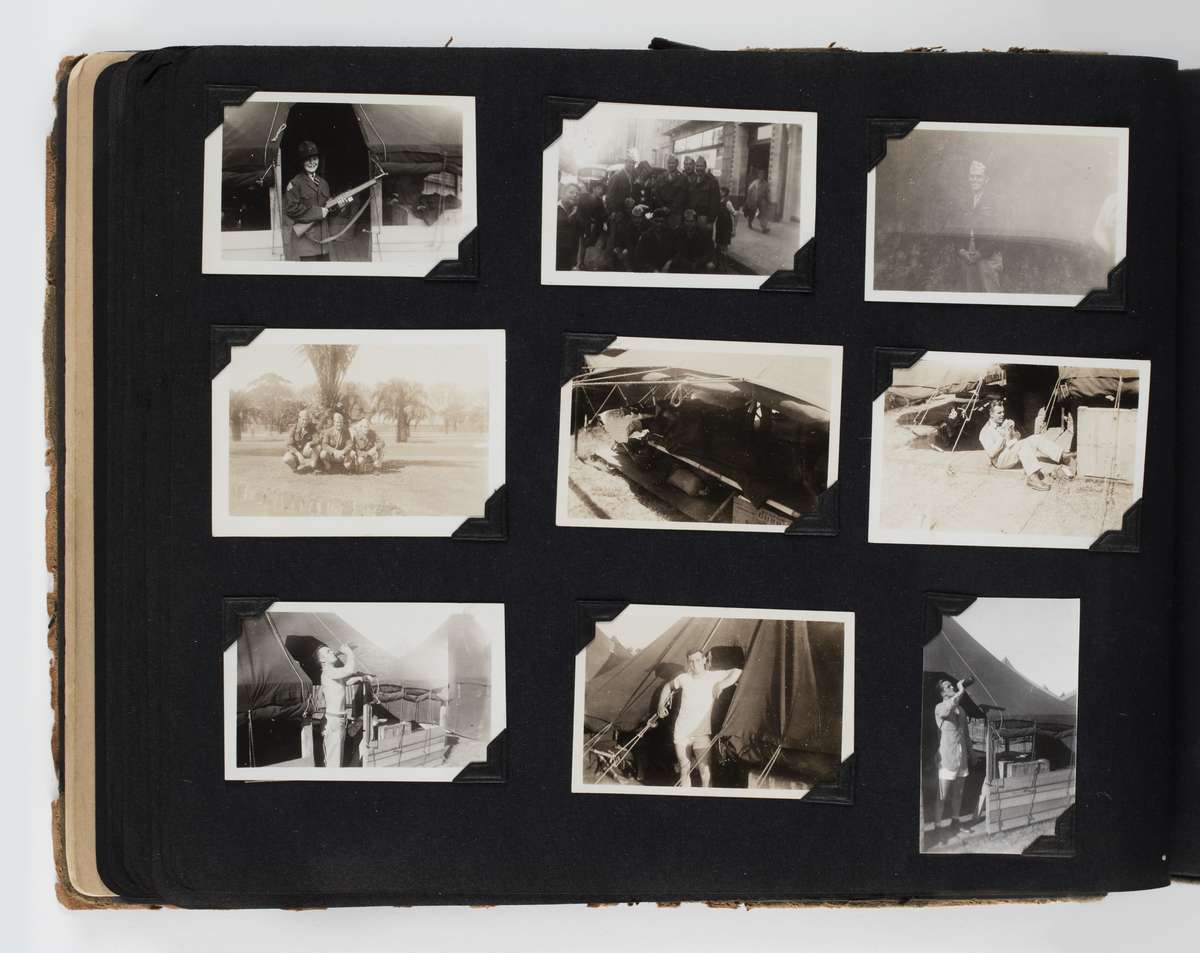 Photographs of the USA Marine camp at the MCG, aka Tent City, during Christmas 1942. ANMM Collection 00055126, gift from John Berry.

Sydney’s 1942 Christmas parade included this proud massed display of Owen Machine Guns fresh out of the factory. Designed by 26-year-old Private Evelyn Ernest Owen of Wollongong, the 9mm calibre gun was a mainstay of the Australian army throughout World War II, the Korean and Vietnam Wars, favoured because it would keep shooting in the mud and moisture of the tropics. 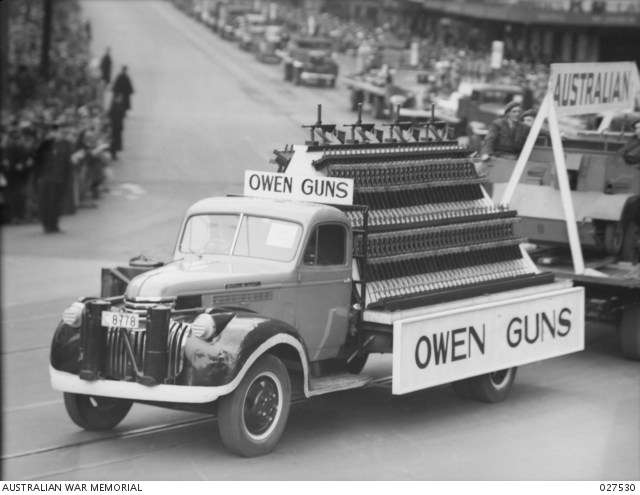 Released in 1942, ‘I’m Dreaming of a White Christmas’ was the hit of the season, staying at the top of the US charts for 11 weeks. It was also a hit in Australia where more than 1 million US personnel would eventually land during World War II. This sentimental song conjured up visions of a northern hemisphere Christmas for Americans sweltering down under.

Around the same time Jack O’Hagan’s ‘When A Boy From Alabama Meets A Girl From Gundagai’ recorded by Joy Nichols was a romantic hit that reflected the growing number of marriages and flings between Australian girls and American doughboys.

The top-grossing movie of 1942 in Australia was MGM’s Mrs Miniver, the story of the trials and tribulations of a British family during the war. Going to the pictures was a welcome release for people working long hours, worried about friends and family ‘at the front’, and buckling down under wartime restrictions. The drama and propaganda of ‘Mrs Miniver’ was balanced by the other more upbeat movie successes of 1942, such as ‘Yankee Doodle Dandy’, ‘Road to Morocco, ‘Pardon my Sarong’ and ‘My Favorite Blonde’.

Australian director Ken G Hall’s iconic documentary short film ‘Kokoda Front Line’  filmed by cinematographer Damian Parer for Cinesound Productions brought the horrors and closeness of the New Guinea campaign into the newsreel cinemas of Australia. The film won an American Academy of Motion Picture Arts and Sciences ‘Oscar’ in early 1943. The statuette was cast in plaster-of-paris, rather than the usual bronze, to save copper and tin for American war machines.

After their naval advance was frustrated by the Battle of the Coral Sea and the Battle of Midway, Japanese forces invaded the north New Guinea coast at Buna, Gona and Sananda in mid-1942 to mount an overland assault on Port Moresby via the Kokoda Track. After their defeat at the Kokoda Track, the retreating Japanese fought tenaciously against Australian and American forces in the  Battle of Buna – Gona from 16 November 1942 until their defeat on 22 January 1943. These men at an advanced dressing station at Buna on 5 December managed to throw together a Christmas tree decorated with cotton wool and cigarette cartons. 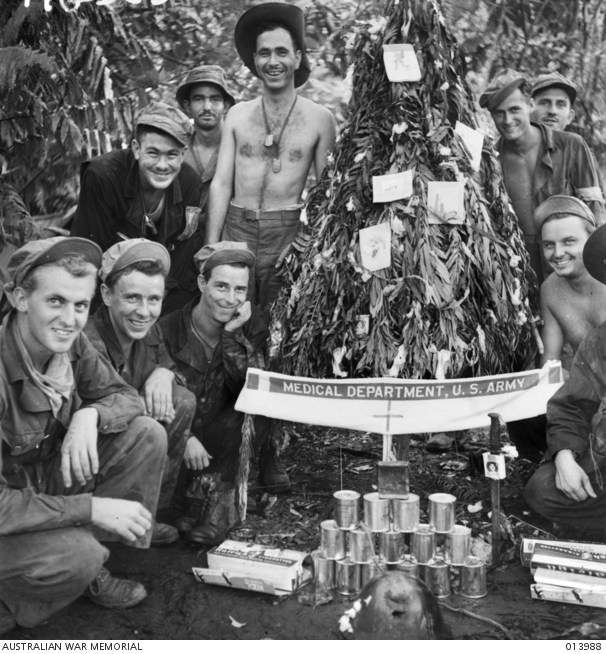 News through the wireless

Wireless radio sets sat in the corner of many lounge rooms in 1942 bringing entertainment, songs and news of the war to Australian families. At Christmas, among the top rating variety and drama programs and soap operas, King George VI’s Christmas message was essential listening. In America, it was President Roosevelt’s Christmas broadcast.