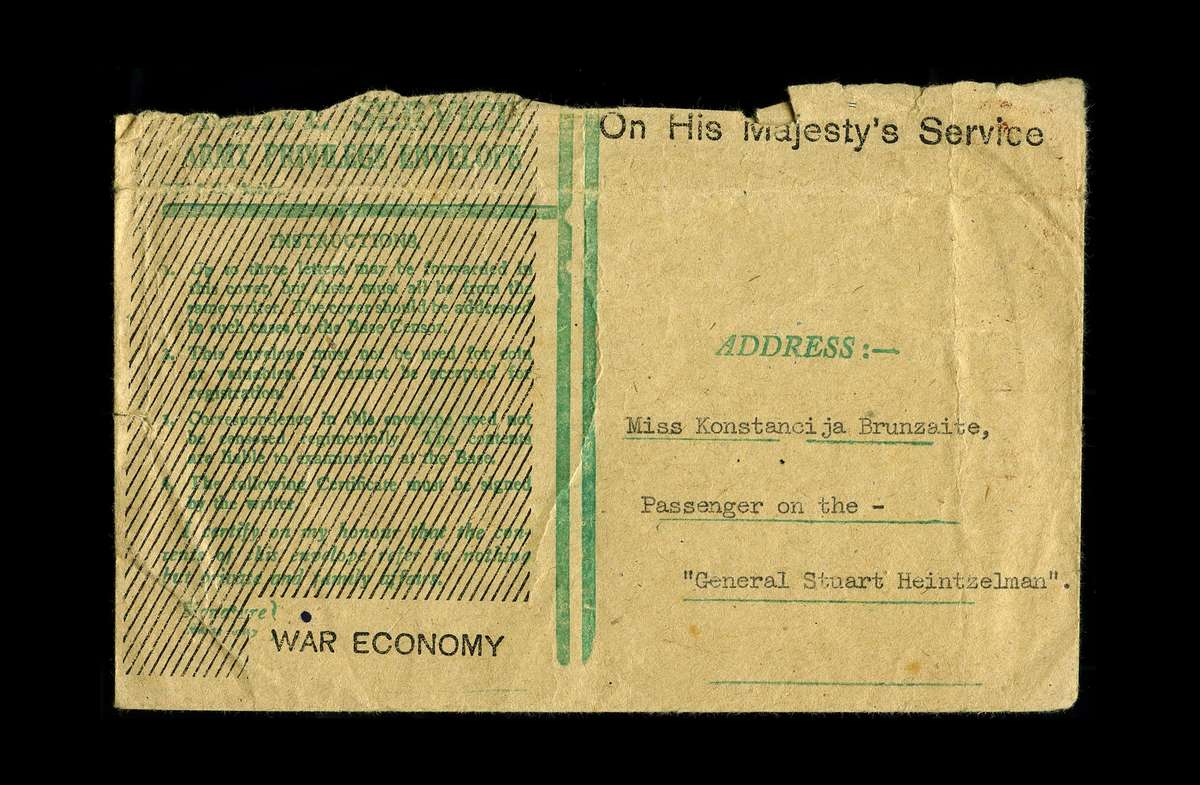 At the museum, we hold a rich collection of ephemera, which refers to written or printed materials that have short-term use, like letters, postcards, brochures, invitations and greeting cards. Many of these items go on to acquire a lasting historical or social significance, such as a letter that was sent to a passenger on the former troopship USAT General Stuart Heintzelman in 1947.

Sailing from the German port of Bremerhaven under charter to the International Refugee Organisation, the ship carried the first group of European displaced persons to be resettled through the Australian government’s post-war migration program. The 843 migrants had been recruited from the Baltic states of Lithuania, Estonia and Latvia, and were nicknamed ‘the beautiful Balts’. Today marks the 70th anniversary of their arrival in Fremantle, Western Australia. 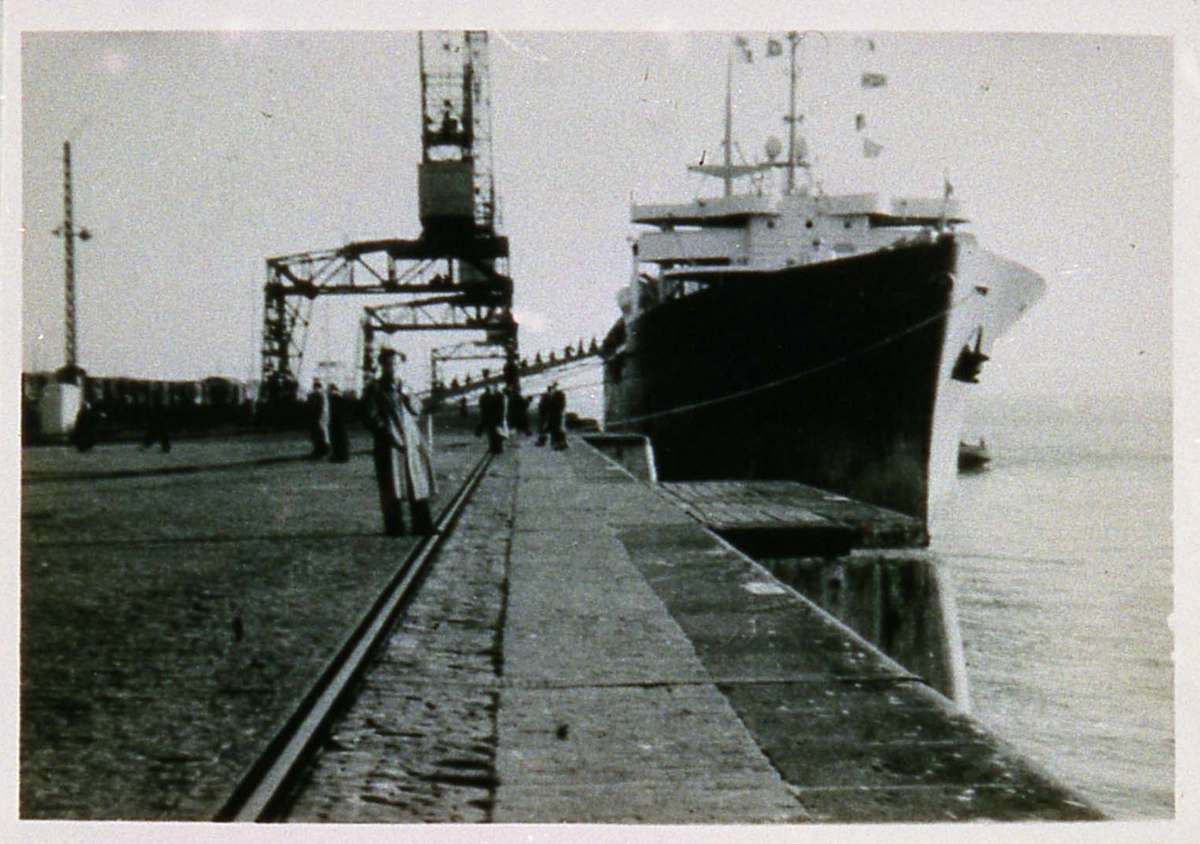 The letter in our collection is addressed to Miss Konstancija Brundzaite (1921–2005), who was one of the first Lithuanian women to arrive in Australia after World War II. It was sent by W H Barnwell of the Australian Migration Team in Bad Pyrmont (not an inferior version of the suburb in which our museum is located, but the German spa town from which Pyrmont got its name!). Barnwell served with the Australian Military Mission, which was based in the British zone of occupied Germany, judging by the abbreviation ‘B.A.O.R.’ (British Army of the Rhine) in the letter’s address. 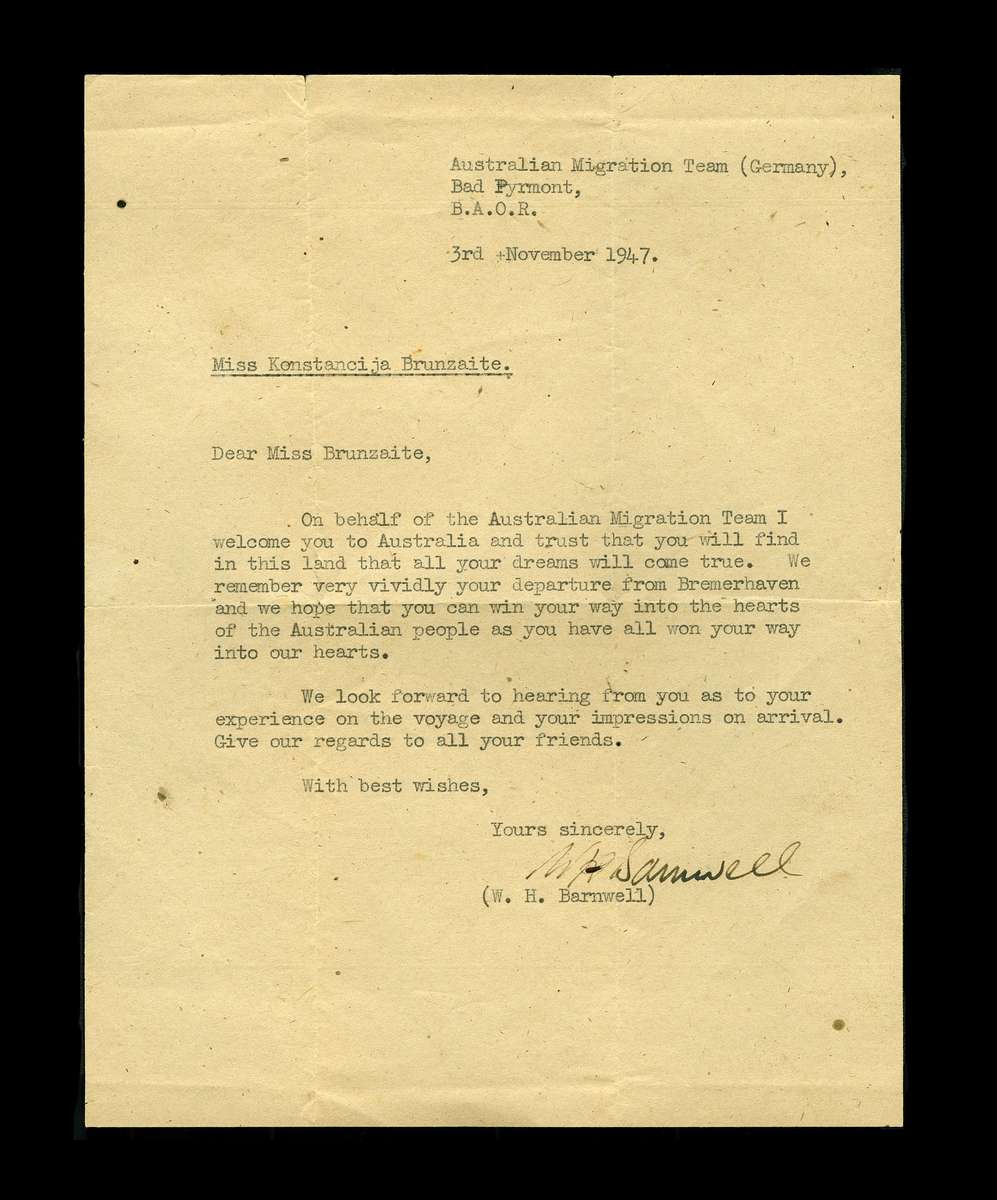 We look forward to hearing from you as to your experience on the voyage and your impressions on arrival. Give our regards to all your friends. 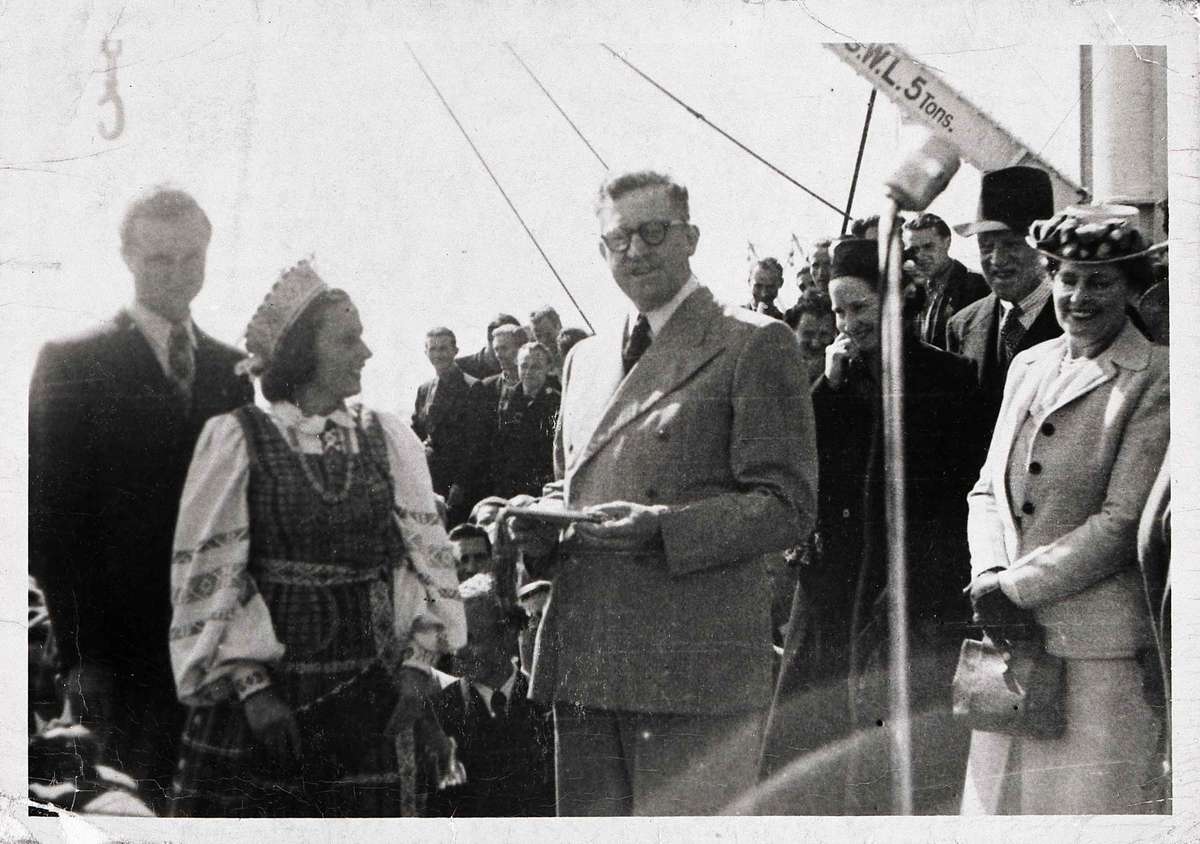 It seems that Konstancija Brundzaite certainly won her way into Australian hearts, when she was photographed presenting a gift to Arthur Calwell, the first Minister for Immigration, on arrival in Australia. The photograph in our collection shows Konstancija in traditional Lithuanian dress and was widely circulated in media reports about the first significant group of non-British migrants to be admitted to Australia. The Border Morning Mail commented on their eagerness to work, as well as their ‘surprisingly good complexions and figures’ and ‘splendidly formed white teeth’ (9 December 1947). 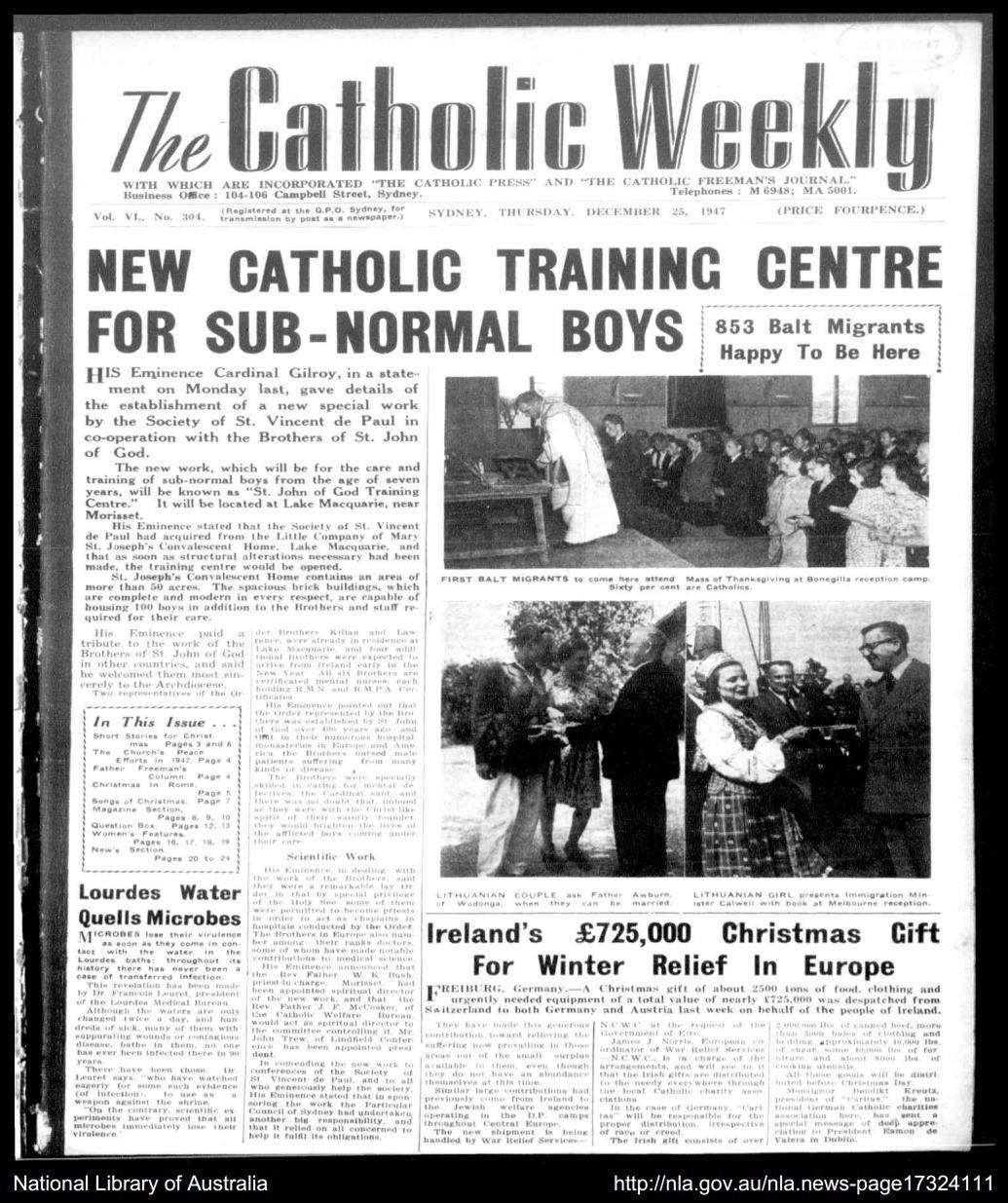 After a few days in Fremantle, the Baltic migrants were transferred to HMAS Kanimbla for their onward journey to Melbourne. They disembarked on 8 December 1947 and were taken to the Bonegilla Migrant Reception and Training Centre near Wodonga, becoming the first residents of Australia’s largest and longest-serving migrant reception centre. From there the new Australians were dispersed to various labouring and domestic jobs around the country, where they were required to work for two years in exchange for their assisted passage. 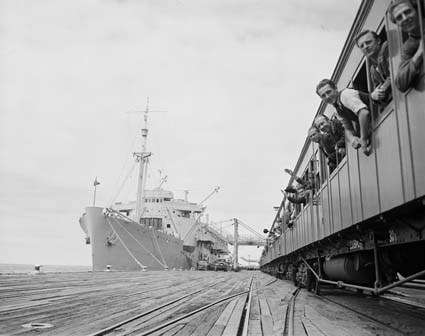 HMAS Kanimbla arrives at Melbourne with the first group of displaced persons, from where they will join the train bound for Bonegilla Migrant Camp, 1947. Reproduced courtesy National Archives of Australia: A12111, 1/1947/3/6.

Konstancija Brundzaite completed her compulsory work contract at a hospital in Sydney. In 1952 she married Lithuanian accountant Vytautas Jurskis (1921–2013), who had arrived in Sydney on SS Wooster Victory in 1948.

The couple had two sons and a daughter and settled on the south coast of New South Wales, where Konstancija worked as a librarian until her retirement. Konstancija and Vytautas Jurskis were registered on the museum’s Welcome Wall by their daughter, who notes that Konstancija ‘cried when she first saw the wide brown land’ of Australia. Their stories – far from being ephemeral – are now preserved at the museum, along with thousands of other displaced people and post-war migrants who followed in their wake.