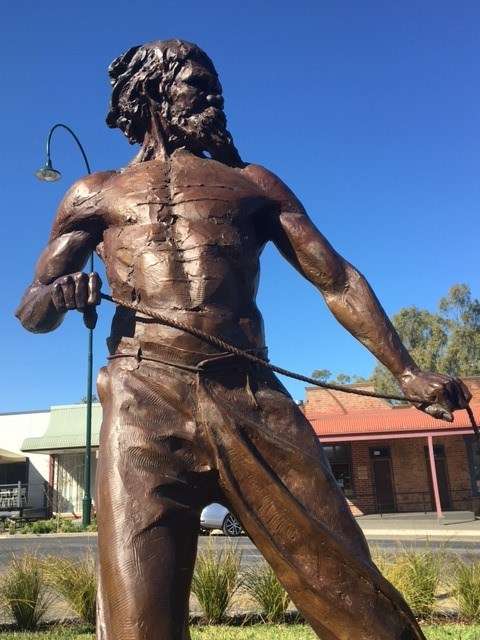 On Friday June 25 1852 the small township of Gundagai, nestled on the river flats of the Murrumbidgee River, was completely destroyed when the flooded river burst its banks. Previous floods had not been this devastating and the early settlers ignored the advice of local Aboriginal people not to build on the low lying ground. Over two days around 80 people drowned from the 250 European residents then living in the township that had grown up around the river crossing. Nearly a third of the population were killed in what still remains as one of Australia’s greatest natural disasters. However another third of the township were rescued – plucked from rooftops or trees and ferried through the raging current to safety in bark canoes. 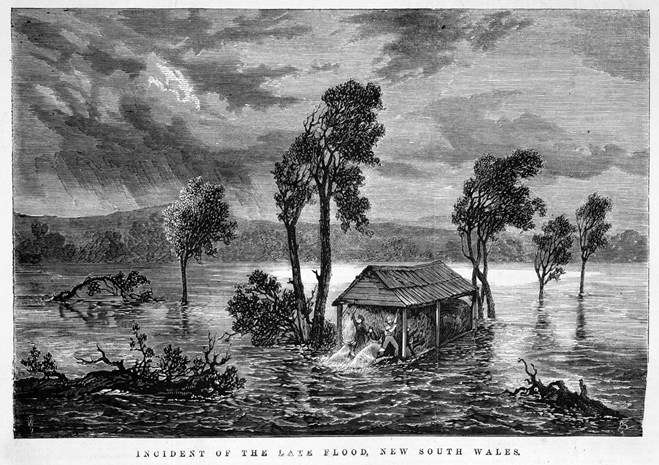 ‘Incident of the late flood, New South Wales’, Samuel Calvert, engraver, wood engraving, published in The Illustrated Australian News, August 13, 1870. This engraving shows a flood in Bodalla, NSW, 1870 very much like the situation at Gundagai in 1852.

From reports soon after, a newspaper described the scene as the floodwaters continued to rise;

On Friday morning, about, 9 o’clock … A boat came from the other side of the river to relieve Mr. Thatcher, whose family had taken to the loft. In re-crossing the river the boat was swamped, and five children were drowned. From the fearful current, and the enormous logs that it was carrying down, it was impossible to attempt to take any more that day. As night drew in, the unavailing cries for assistance all around became fearfully harassing. Crash after crash announced the fall of some house, and the screams that followed the engulphing (sic) of those who clung till the water attained its greatest height, about 11 o’clock at night. Up to this time, about 34 houses had been washed away, and 60 lives lost.

Most of the 69 people rescued were saved by two Wiradjuri men, Yarri and ‘Jacky Jacky’. They began plucking Gundagai residents from the trees and few surviving rooftops over the next 24 hours. The pair would start their canoes up river and paddle down and around the trees in the swirling floodwaters, searching for survivors. Despite most European-Australians’ racist attitudes towards the Aboriginal people they had dispossessed from their traditional lands by the 1850s, none refused assistance.

The usual conception nowadays of bark canoes is of a frail and flimsy type of watercraft. In fact, as the two ‘heroes of Gundagai’ proved, they were stable, manoeuvrable, could be carried easily on land as they trudged back upstream to begin their sweep for survivors, and were immune to large logs with such a shallow draught and flexible material. The bark canoes were eminently suited to such a dangerous task.

Indeed Europeans had long appreciated the skill of Aboriginal freshwater people in their canoes, and the utility of making a relatively quick and functional watercraft in flood waters. Aboriginal people had been assisting European settlers in inland regions for years in places where they had no, or non-functional, watercraft. 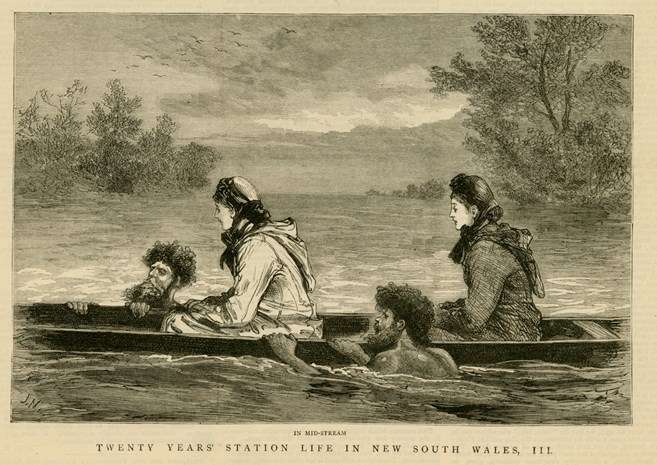 Unknown artist, The Ladies want to cross a stream; In mid-stream, 1883, illustration taken from The Graphic, wood engraving on paper. Purchased with funds from public donation, 2014. Art Gallery of Ballarat.

At the Nawi 2017 – Travelling Our Waters symposium held at the Australian National Maritime Museum in November this year, the feats of Yarri and Jacky and the prevalence of bark canoes in European inland exploration and settlement were the topic of two wonderful presentations. Fred Cahir of Federation University, Ballarat talked about how the bark canoe and Aboriginal skills were critical to Europeans on the frontier.

The other talk by Peter Smith and Bill Leigh, two Aboriginal men from the Gundagai region, began with the story of the 1852 flood, but then followed the history of its remembrance (or lack of) into the present day. For their efforts in saving nearly a third of the township, Yarri and Jacky were given breastplates and a small reward. Over time, some descendants of people saved by the two heroes had assisted in erecting plaques and some people had been interested in the story. A ballad to the Wiradjuri heroes was written in 2006. But the story of two of the greatest lifesavers in Australian history had not received widespread recognition – especially compared to the well-known dog sitting on a tuckerbox. Until now. 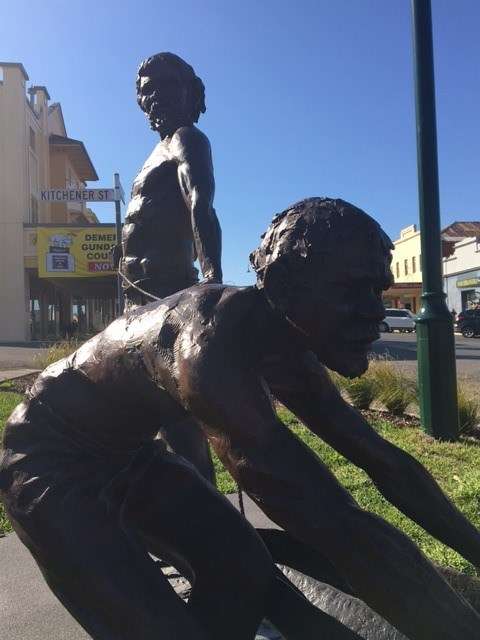 Yarri and Jacky captured handling their canoe in raging floodwaters in a pose that now will greet travellers to Gundagai for a long time to come.  Photo: Stephen Gapps.

After several years of fund-raising, planning and assistance from Cootamundra-Gundagai Regional Council, in June this year for the 165th anniversary of the Great Flood a sculpture by renowned Melbourne artist Darien Pullen from the Meridian Sculpture Foundry, was unveiled. This powerful figurative work showing Yarri, Jacky and their canoe now takes pride of place in the main street of Gundagai.

In November this year, interpretive panels were also installed alongside the sculpture, completing what is a wonderful testament to two brave and skilful men, and to the recognition of Aboriginal people in Australian history. The panels were designed by local graphic designer Joe Morton of Goanna Graphics. They tell the story of the events of the great flood of 1852.

They also tell the ongoing story of the lack of recognition. In 2016 the Brungle-Tumut Local Aboriginal Land Council applied to have Yarri and Jacky honoured with posthumous bravery awards. However the application was rejected and they are now attempting to bolster support for another application with a petition. 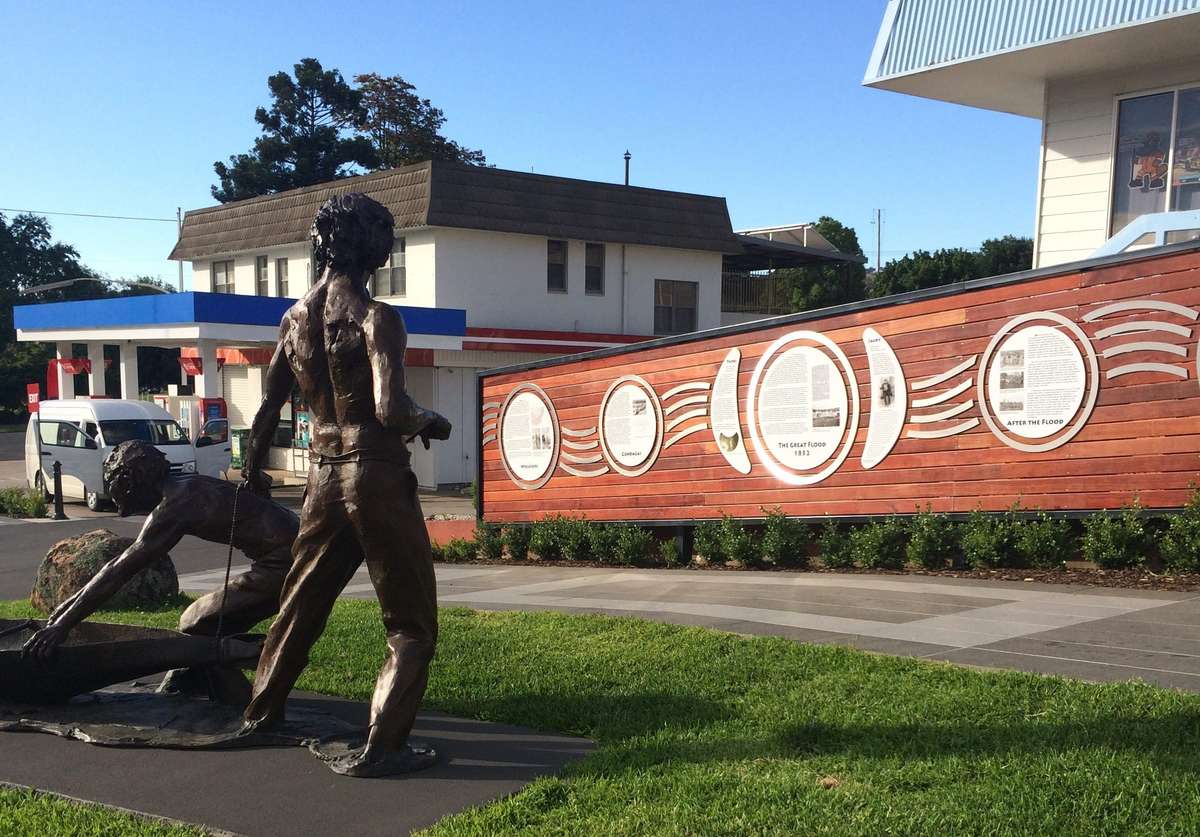 Other stories, lectures, presentations, workshops and canoe-building took place at the Nawi 2017 symposium and the museum hopes to present more of these in future, and continue to foster community collaborations and knowledge sharing with further Nawi programs.

View all posts by Stephen Gapps→
Posted in: Indigenous
↑