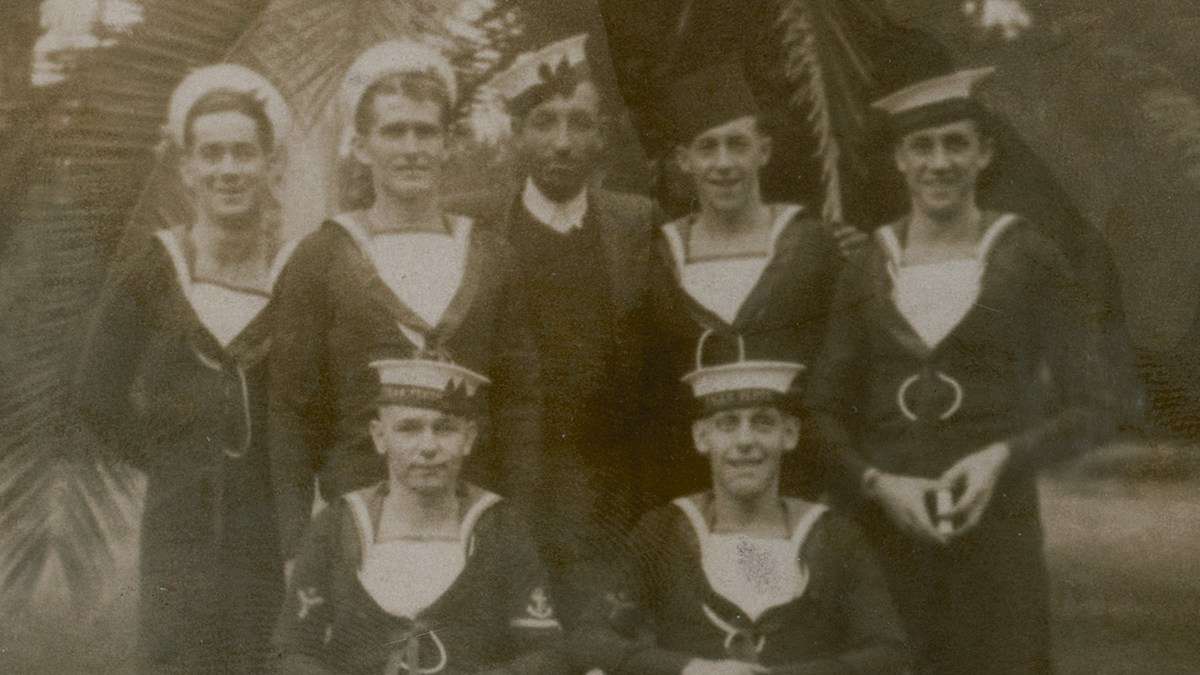 Before its deployment to Asian waters, HMAS Perth saw duty in the Mediterranean and Middle East. Egypt was exotic and exciting for the young Australian sailors, and photographs to send back home were a priority. Image: US Naval History and Heritage Command.

On the night of 28 February–1 March 1942, the Australian light cruiser HMAS Perth and the American heavy cruiser USS Houston fought bravely and defiantly against overwhelming odds – outnumbered and outgunned by a large advancing Japanese naval force – as they approached Sunda Strait, a narrow sea passage between the islands of Java and Sumatra in the Dutch East Indies (now Indonesia). Both ships sank that dreadful night in the Battle of Sunda Strait. 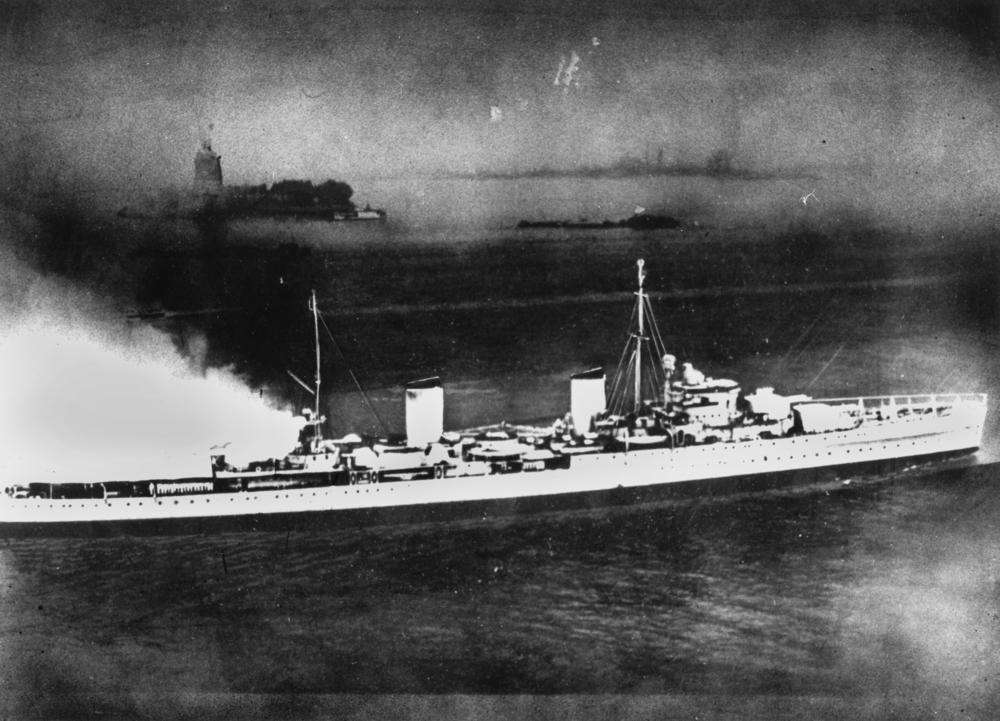 Perth and Houston had very different beginnings to their naval careers. Perth started life in 1934 as the British Royal Navy’s modified Leander class cruiser HMS Amphion, and was transferred to the Royal Australian Navy in June 1939 and proudly renamed HMAS Perth. USS Houston was commissioned into the United States Navy in June 1930 and headed to the Philippines in January 1931 as a flagship of the US Asiatic Fleet. Houston’s pre-war service was filled with routine training operations plus a period protecting American nationals and US interests in Shanghai during the 1931–33 conflict between China and Japan. Back in the USA by late 1933, Houston spent the next seven years on fleet manoeuvres and exercises – and on special cruises for President Franklin D Roosevelt, Houston’s most famous passenger. He sailed four times on recreational cruises between 1934 and 1939, earning the cruiser the nickname ‘The Presidential Taxi’. With the president aboard, Houston visited the Caribbean, Hawaii, Alaska and the Galapagos Islands. In November 1940, USS Houston left America for what would be the final time and returned to the now-ageing Asiatic Fleet.

HMAS Perth’s pre-war service was very short. It had been intended that, once the crew had taken possession of the ship from the Royal Navy, they would embark upon a three-month voyage home to Australia via New York, the West Indies, the Panama Canal, the west coast of America and the South Pacific. The outbreak of war with Germany on September 3rd, 1939 changed these plans significantly. A successful 12-day visit to New York as Australia’s representative at the World’s Fair was followed by a longer stay than anticipated in the West Indies. 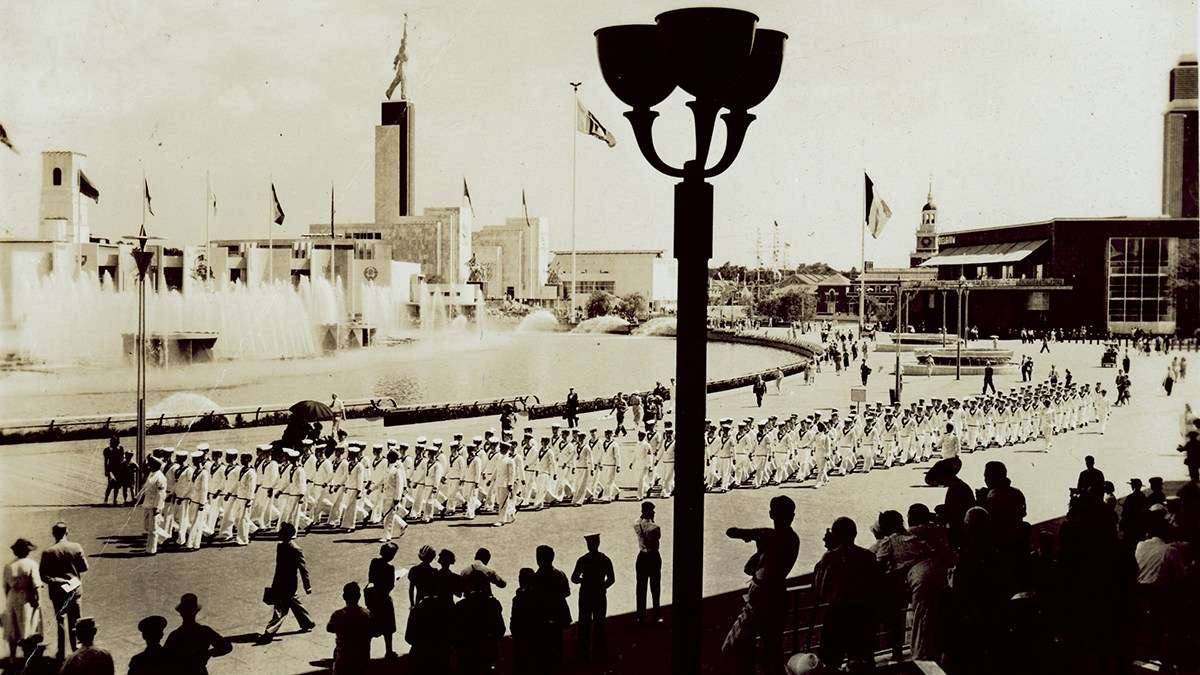 During Perth’s visit to New York for the World’s Fair, a contingent of the crew marched as part of the fair’s ‘Australia Day’. Image: US Naval History and Heritage Command.

From August 1939 to February 1940, Perth was on an active war footing, undertaking patrol and escort duties in the West Indies and across the Caribbean and Western Atlantic. Arriving in Sydney in March 1940 to a tumultuous public welcome, Perth took up duties in Australian waters until ordered to the Mediterranean in November. Patrol work, troop transportation and escort duties with the Royal Navy’s 7th Cruiser Squadron followed. HMAS Perth took part in the Battle of Matapan, evacuated troops from Greece and Crete, aided the Syrian campaign and survived several aerial attacks, although four men were killed when the forward boiler room received a direct hit from a Stuka bomber.

In November 1940 Houston was heading up the Asiatic Fleet in the Philippines, when the brutal Japanese attack on Pearl Harbor on 7 December 1941 flung America into war. It was immediately deployed to convoy protection and reconnaissance as part of the American-British-Dutch-Australian (ABDA) naval force in a valiant effort to stop the Japanese advance through the East Indies (Indonesia). Many of these ships were outdated and poorly equipped, and communication within the multinational force was poor. They were at a major disadvantage against the stronger, more modern Japanese fleet.

Having returned to Australia from the Mediterranean in August 1941 for much-needed repairs and respite for the crew, it wasn’t long before Perth was sent north to join the ABDA force. In February 1942 the commanding officers of Perth and Houston met for the first time, not knowing the magnitude of what lay ahead for them, their ships and their crew.

On 4 February 1942, a group of ABDA ships sailed to intercept a Japanese force in the Makassar Strait but were attacked by Japanese bombers. A direct hit on Houston’s aft eight-inch gun turret killed 48 men and disabled the turret. On 27 February the eight-hour Battle of the Java Sea sank or crippled two Dutch cruisers and three destroyers. Both Houston and Perth survived, but the ABDA fleet was in disarray.

The Battle of Sunda Strait

On the night of 28 February, the two ships sailed for Sunda Strait. They ran into most of the Japanese Western Invasion Convoy in Banten (Bantam) Bay – more than a dozen cruisers, destroyers and smaller ships guarding 60 transports. In the ensuing battle, Perth and Houston were repeatedly bombarded; both were struck by torpedoes and sank. Men abandoned ship as best they could, swimming for the distant shores of Java, but more than a thousand Houston and Perth men died that night.

For the remainder, their battle to survive had started. Many succumbed to their injuries; others struggled in the water for endless hours. Most made it to land or were picked up by the Japanese, but others were swept by strong merciless currents through the Sunda Strait and never seen again. 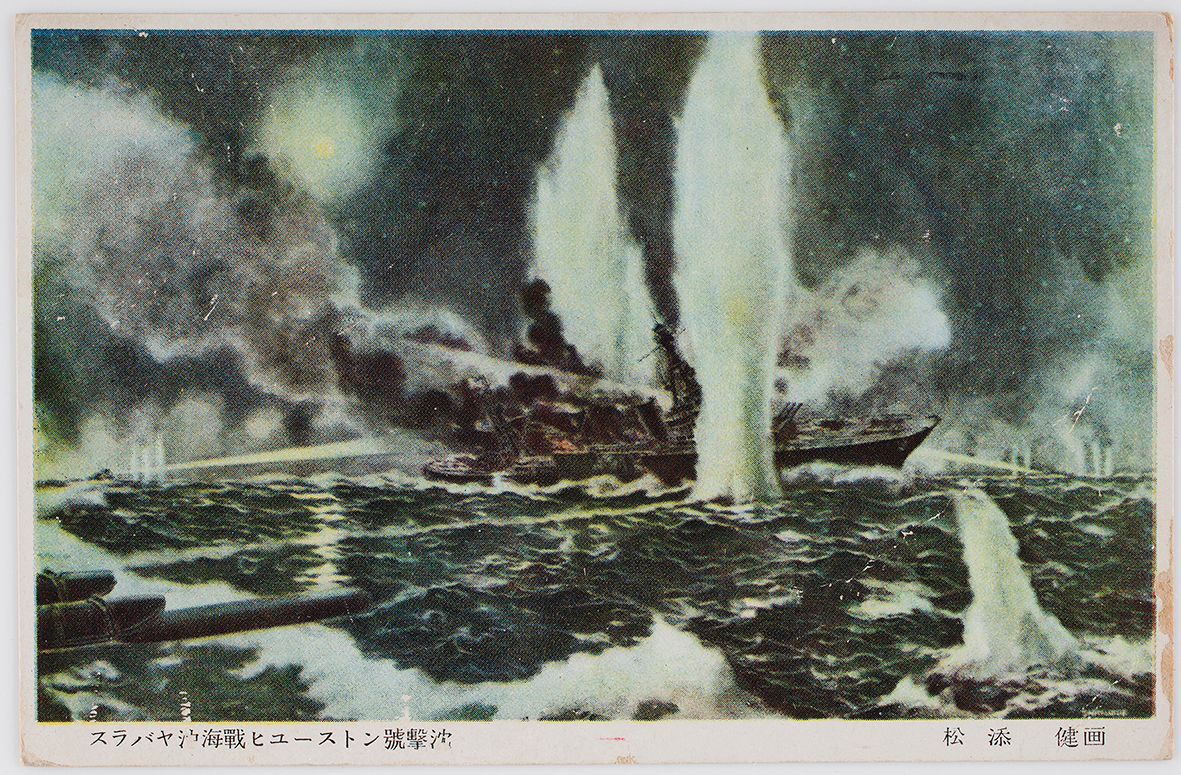 The sinking of USS Houston was a propaganda win for the Japanese, as shown in this postcard. They had claimed to have sunk the ship at least four times in previous months; this time it was real. Courtesy private lender.

Men captured by the Japanese were interrogated; some were killed. They were moved from prison camp to prison camp over the next three years and put to work building the Burma–Thai railway, along with 60,000 other Allied POWs and some 250,000 Asian labourers. Some were sent directly to Japan to work in coal and iron ore mines or on the docks loading and unloading Japanese ships. They endured the ordeal of filth, privation, sparse rations, disease and brutal punishment. They were bombed by their own planes and torpedoed at sea, but showed a strength of mind, spirit, humour and camaraderie that kept them alive through the darkest periods of their lives. In the end, only about 25 percent of the men who had fought at the Battle of Sunda Strait made it home. 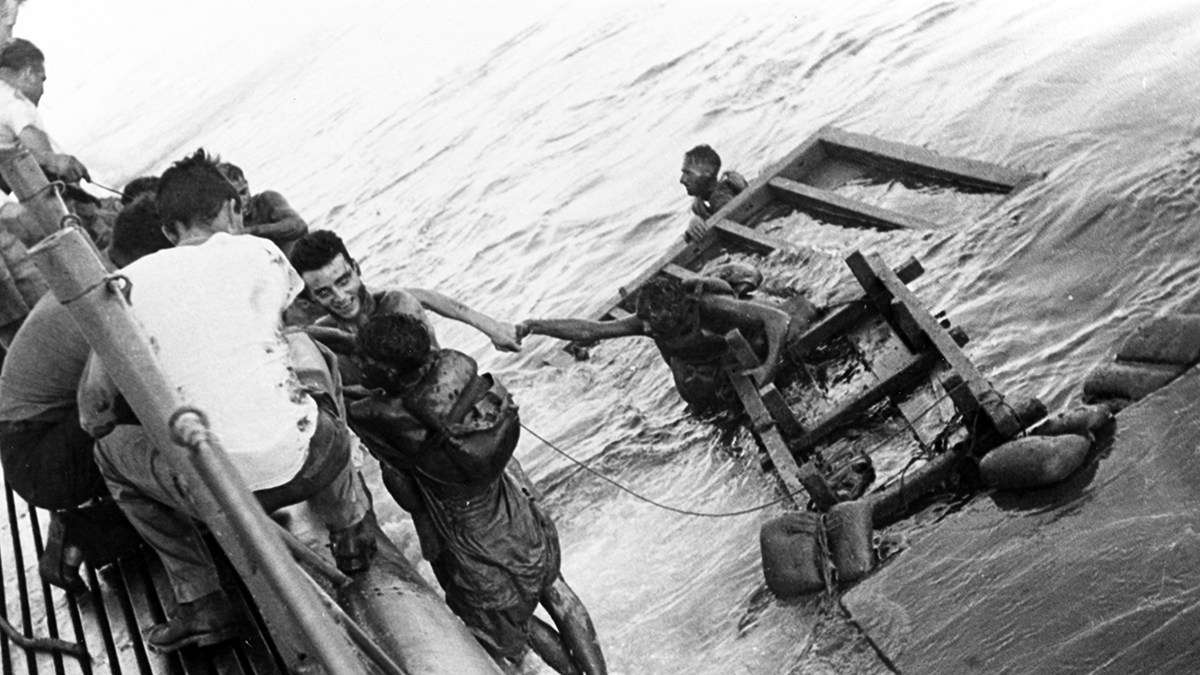 In September 1944, US submarines torpedoed a convoy of Japanese cargo transports in the South China Sea – unaware that POWs were aboard, including Perth men. Left to die by the Japanese, prisoners clung desperately to wooden rafts. US submarines Pampanito, Sealion, Barb and Queenfish rescued 159 oil-sodden, exhausted, starved and dehydrated Allied POWs, sharing their clothes, food and bunks with them. Image: US Naval History and Heritage Command.

The first HMAS Perth survivors returned to Australia in late 1944. A handful of them were being transported from Singapore to Japan in the Japanese freighter Rakuyo¯ Maru when it was torpedoed by a US submarine in the South China Sea on 12 September 1944. They were rescued by US submarines patrolling the area, taken to Saipan in the Northern Mariana Islands for hospital treatment and then flown to Brisbane, Queensland, for debriefing and further treatment. The remaining Perth survivors were repatriated when the prison camps were liberated at the end of the war.

Evacuation of USS Houston survivors began on 28 August 1945, in planes sent in by the American Army’s Air Transport Command via Karachi (then part of India). They were flown direct to Washington, DC, for hospital checks, treatment and debriefing before being sent home.

Life would never be quite the same again for the Perth and Houston survivors. Some chose to re-enlist in their navy, while others returned to civilian life. For some the choice was made for them when they were declared unfit for service due to the injuries – physical or psychological – they received during the war. Of Perth’s company of 686, including airmen and civilian personnel, only 218 returned to Australia. Of the 1,068 sailors, marines and airmen aboard Houston, only 261 returned to the United States.

The battle-scarred remains of HMAS Perth and USS Houston lie in Banten Bay off the north-west tip of the Indonesian island of Java at the approaches to Sunda Strait. Perth lies on the sandy bottom at about 35 metres (115 feet) and Houston on a silty seabed at about 30 metres (98 feet).

Advances in underwater exploration – especially the invention of scuba gear – led to the discovery of the wreck sites in the 1960s. Since then, they have been popular for technical diving, for history enthusiasts and for taking souvenirs. Since 1974 salvage companies have removed brass and bronze from these and other wartime wrecks, but in 2013 Indonesian dive companies alerted Australian, American, British and Dutch authorities to the damage being done by international commercial salvage companies. Salvagers use divers operating from barges equipped with crane-operated grabs. With this equipment, they are removing entire wrecks from the Java Sea and surrounds for the scrap metal value. Australian, Indonesian and US authorities are now working together to formulate a cultural underwater heritage plan for these World War II ships, hoping to prevent further violations.

The men from Perth and Houston formed a close and enduring relationship through their common experiences of the harrowing sea battle followed by imprisonment. Physical reminders of their sacrifice include memorials and the naming of ships in their honour. More significant are the ceremonies of remembrance held in Australia and America each year. The ships and their men are remembered at Anzac Day in Australia and Veterans’ Day in the United States, and both countries have services on the 1 March anniversary.

Guardians of Sunda Strait is open until 19 November 2017.

Explore more stories of War and Peace in the Pacific during World War II in our feature stories, including the Bombing of Darwin and the Attack on Pearl Harbor.