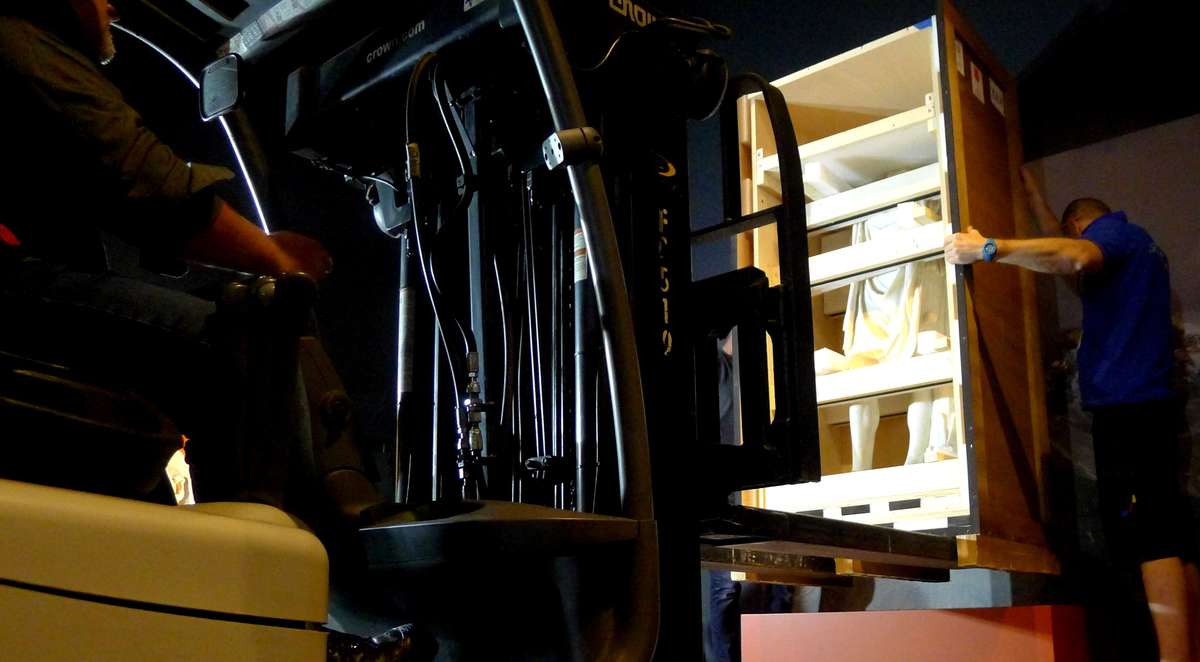 Installing the statue of Hermanubis with the assistance of a forklift. Image: Will Mather / ANMM.

Several of the most unusual and interesting items in Escape from Pompeii are from the Museum of the Parco Archeologico dei Campi Flegrei housed in the Castle at Baia on the Bay of Naples. The Archaeological park covers the ancient sites of Cumae, Puteoli (modern Pozzuoli) and Baiae which were a lot more famous to ancient Romans than Pompeii and Herculaneum. The sites are on northern side of the Bay as it stretches past Mount Vesuvius and Naples.

All three sites are situated in or around the Campi Flegrei, which translates as the fields of fire. The Campi Flegrei is one very large ground level volcano with gaseous fumeroles, boiling mud pools, and numerous smaller craters – about 24 of them – some of them flooded like Lake Avernus. The caldera of the volcano continues underwater into the Bay of Naples. If it were erupt it would be catastrophic. 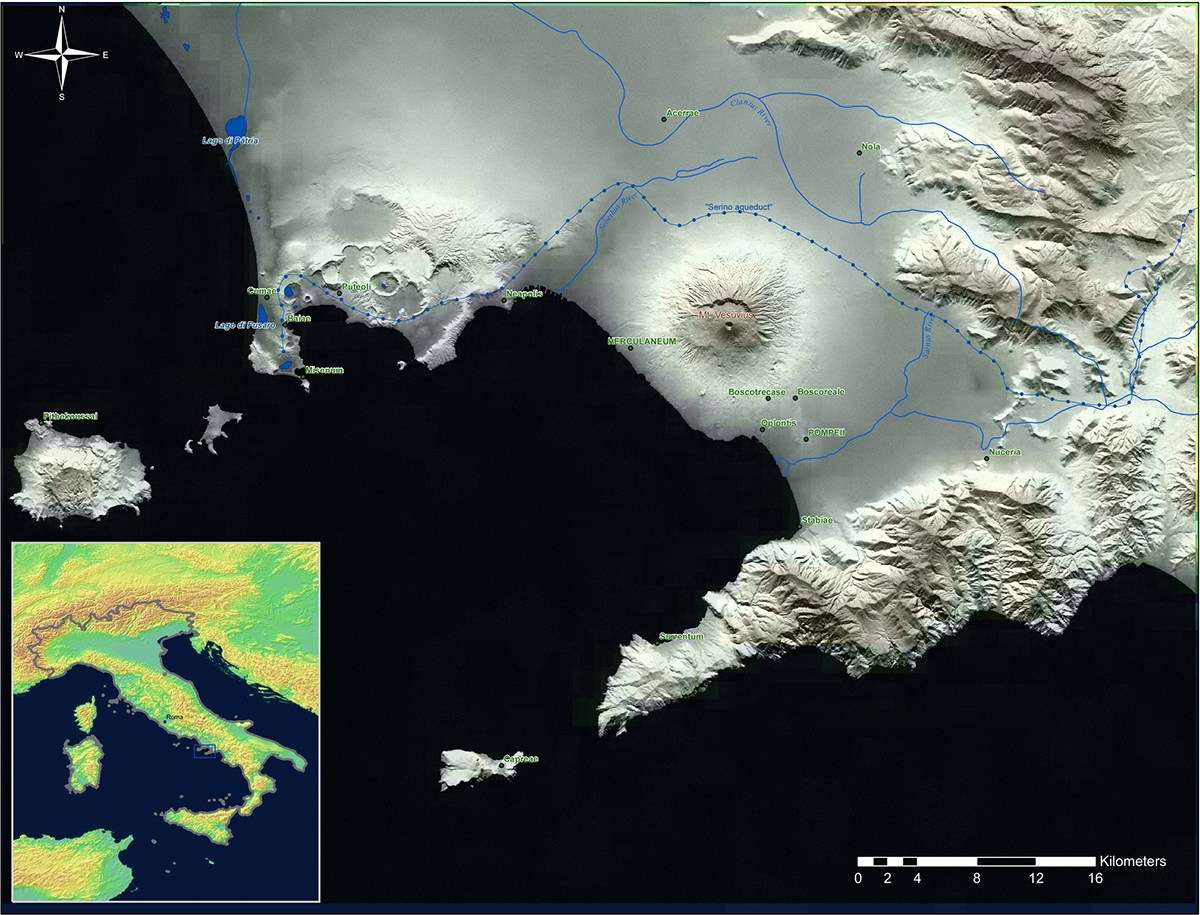 Cumae, founded by the Greeks in the 8th century BC, was home to the famous sibyl whom Aeneas visits to gain entry to the underworld at Lake Avernus. It was her books of prophecies that King Tarquin bought and the Romans consulted in times of crises. Puteoli was originally Cumae’s port, it became a Roman colony in 194 BC and grew into a separate city. By the first century AD, Puteoli was one of the most important trading ports in the Mediterranean acting as the main commercial port of Rome. Thanks to the caldera it had a deep and protected harbour – unlike Ostia, Rome’s river port at the mouth of the Tiber. 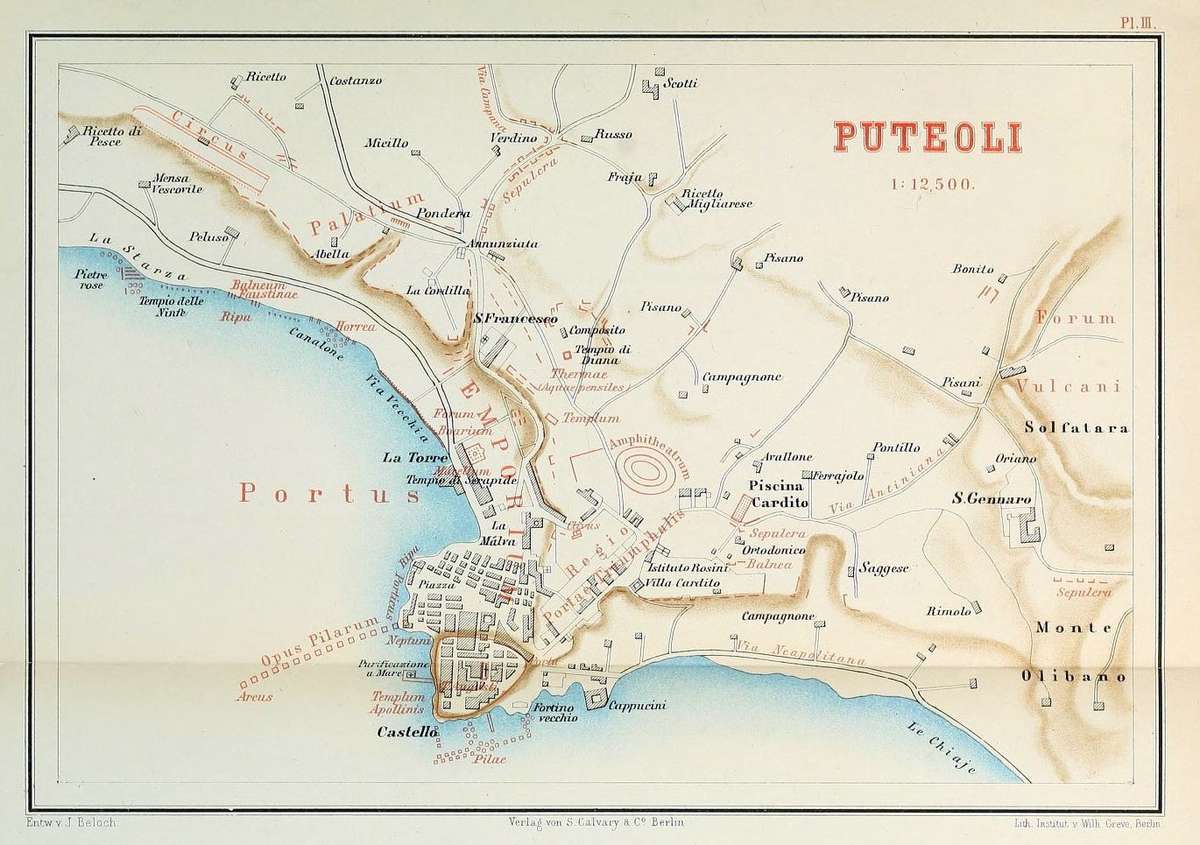 It was to Puteoli that the Alexandrian fleet from Egypt arrived bringing luxury goods coming from the east, including grain. The huge grain ships would have their cargo unloaded here before it was transhipped in smaller vessels to Rome. It is estimated that 100,000 tons of grain passed through the port each year [1]. The reason for this was that good ports along the west coast of Italy were in short supply and Puteoli is situated pretty much at the centre of the Campi Flegrei caldera. Indeed, its name may be derived from the Latin puteo meaning to stink – a reference to the sulphuric gases emitting from the nearby fumeroles. Its ruins also show signs of bradyseism – the rise and fall of sea levels as the magma chamber beneath the caldera rises and falls. In particular its market place which is now partially underwater. 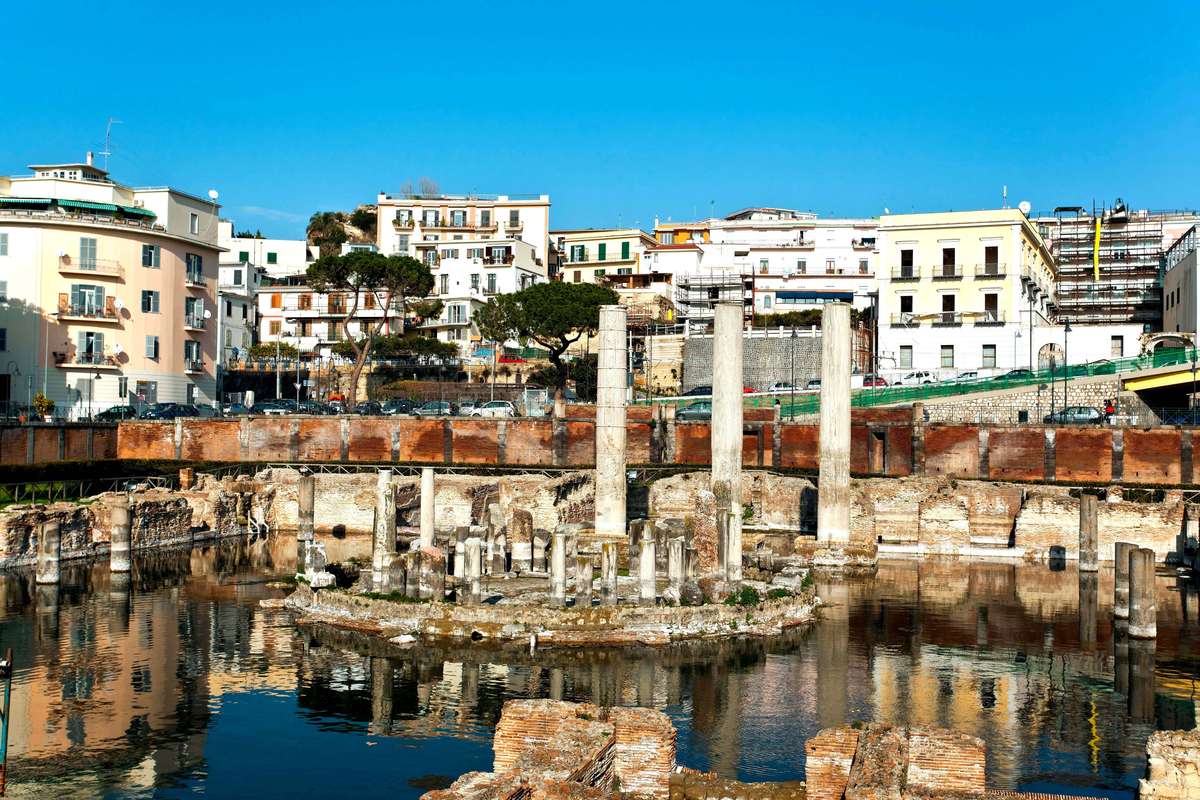 Further around the Bay from Puteoli was Baiae. It was a notorious spa town frequented by the rich and famous noted more for the louche activities of its denizens than its healing waters. The Campi Flegrei caldera provided the hot volcanic springs that fed its bath houses, and have caused most of the ancient town to plunge under the Bay of Naples thanks to bradyseism, forming today’s underwater archaeological park. Baiae and the surrounding area was the favoured holiday destination of the Roman emperors and their families. Baiae was not far from the northern tip of the Bay and Misenum,  making it’s flooded volcanic craters an ideal home for the Roman Naval Fleet. 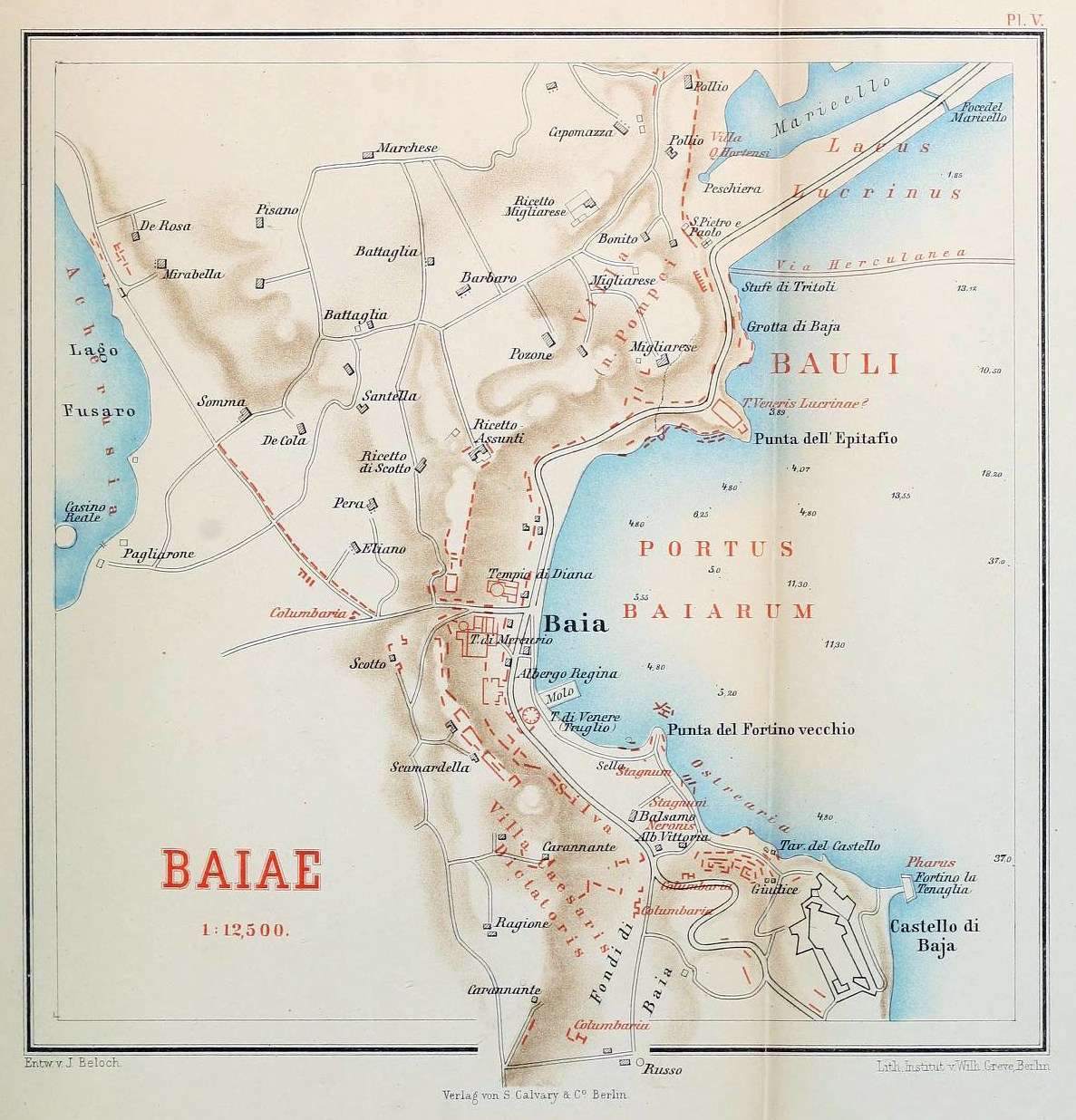 The three towns were largely uneffected by the eruption of 79 AD. It would have been a different story if the wind had been blowing in the opposite direction. From the pumice and ash distribution scientists have calculated that wind was blowing south west; over the smaller and less economically important Pompeii. Had it been blowing north east over the ports of Neapolis (Naples) and Puteoli the economic impact would have been a lot more severe, not to mention Misenum, the largest and most important Naval Base in the Roman Empire.

Originally the Campi Flegrei Museum was approached during the development of the exhibition to provide objects relating to the Roman Navy at Misenum. This they did: In Escape from Pompeii there is the stunning relief of a warship showing its rowers and their pausarius (the officer who kept their time with a drum). It was found at Lake Fusaro near Cumae and is probably from a naval monument raised during the reign of the Emperor Augustus. There is also the funerary stele of Tiberius Claudius Phoebus, a sailor from the trireme VIRTUE, found at one of the necropolis’s of Misenum. It records that he has been born in western Turkey, died at the age of 30 and had been in the Navy for 14 years. The stele was raised by his heir, Lucius Vibius Valens, a non-commissioned officer (sesquiplicarius) of the trireme CAPRICORN.

But prehaps the most interesting of all these artefacts is a small bronze engraved plaque: The Military Diploma of Lucius Camelius Severus. It was found on 3 June 1987 at the site of a Roman villa in the Campi Flegrei area. It was proof that the holder was a Roman citizen. Only Roman citizens could serve in the legions, but subject peoples of the empire, and people who lived outside it, could sign up in the auxiliary forces or as rowers in the fleet (like Tiberius Claudius Phoebus). In the case of Camelius it was in the Urban Cohorts in Rome (a kind of police force). On completion of their service they were given Roman citizenship which in the first centuries of the Roman Empire gave you increased social status and legal protection. The Military Diploma was proof of this, the grantee retained one copy while the other was displayed in Rome. The diploma was sealed, with a copy inside that could not be tampered with, and included a list of witnesses. 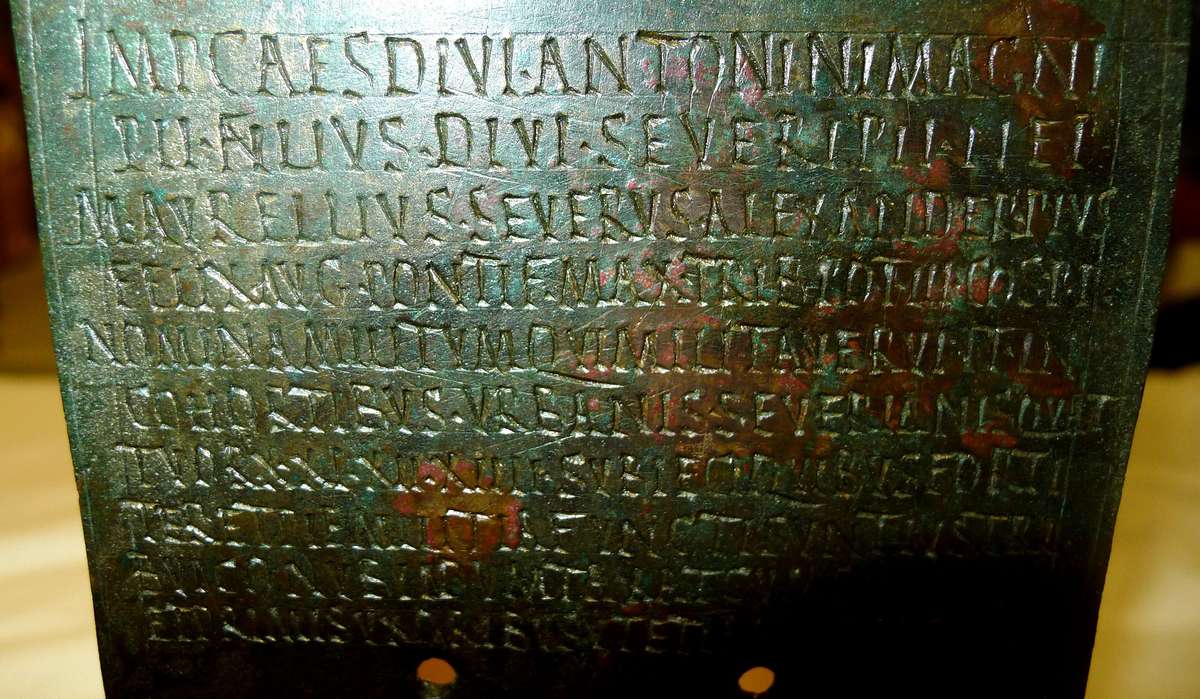 One of the rarest items offered by the Museum was a plaster hand from a sculptor’s model. Marble copies of Greek masterpieces were in high demand to decorate villas, gardens and public buildings. To meet this demand plaster casts of the original bronze statues were made in situ in Greece. Made in sections the plaster parts were joined together with wire and wax to make a full size plaster maquette of the statue. The maquette was then used to make the true to scale copies in marble. This fragment of a cast was found with around 400 others under the Baths of Sosandra in Baiae in 1954. It indicates that there was a sculptor’s workshop in Baiae producing copies of Greek masterpieces for clients around the Bay of Naples and Rome.

Making the casts, not to mention making the copies, was incredibly time consuming and expensive. Indeed, very few copies of Greek sculptures have been found outside Rome and the Bay of Naples area, which shows how wealthy this region was [2]. The plaster casts have been identified as being from Greek bronze statues of the 5th and 4th century BC. The casts themselves date to the first two centuries AD.

It is thought that our fragment is a cast of the left hand of the statue known as the Belvedere Apollo, a marble copy of which is now housed in the Vatican Museums. When the workshop closed down the valuable metal wire was removed and reused and the fragments dumped under the Baths, they are a very rare find, these are the only ones to have survived from antiquity. 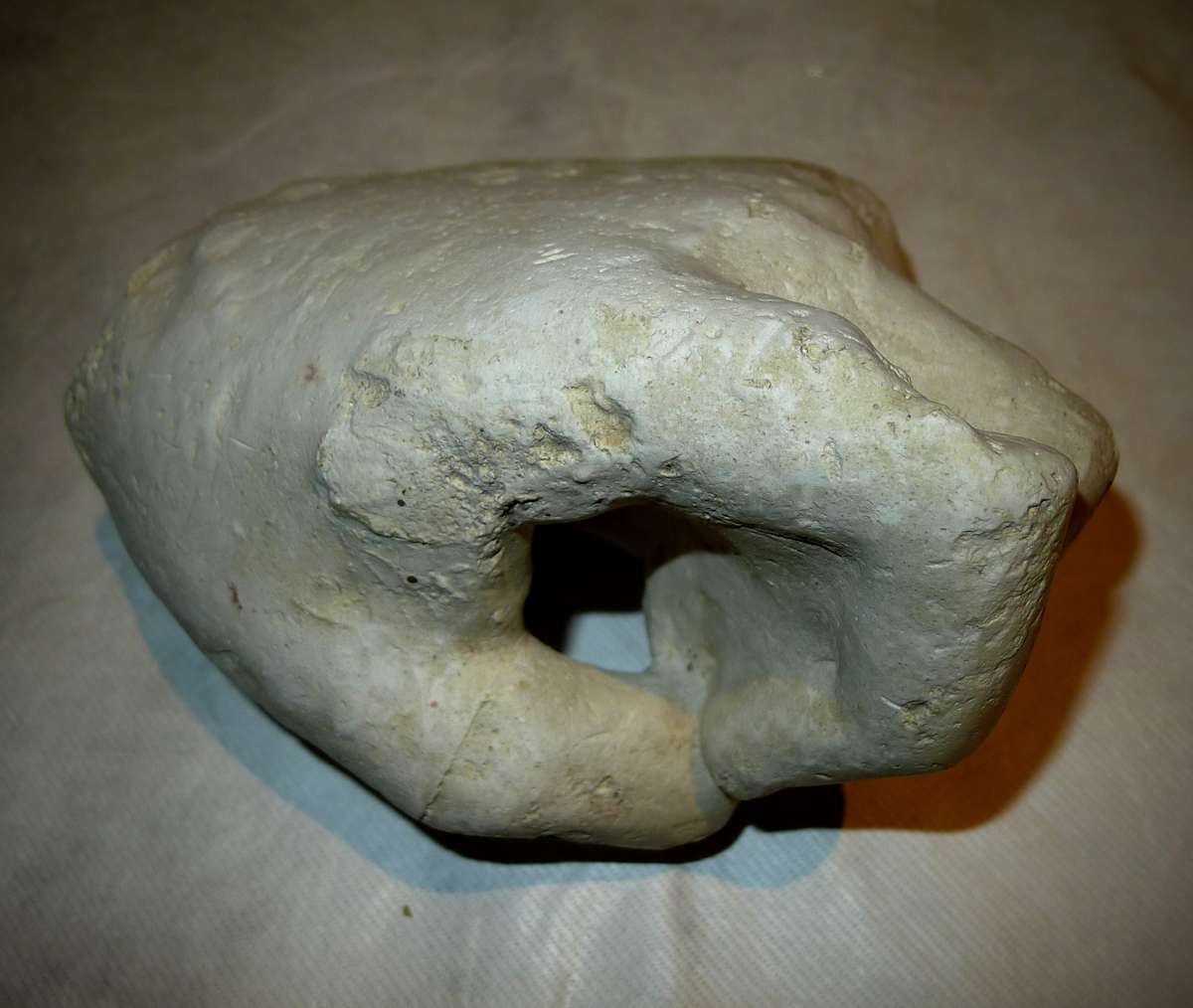 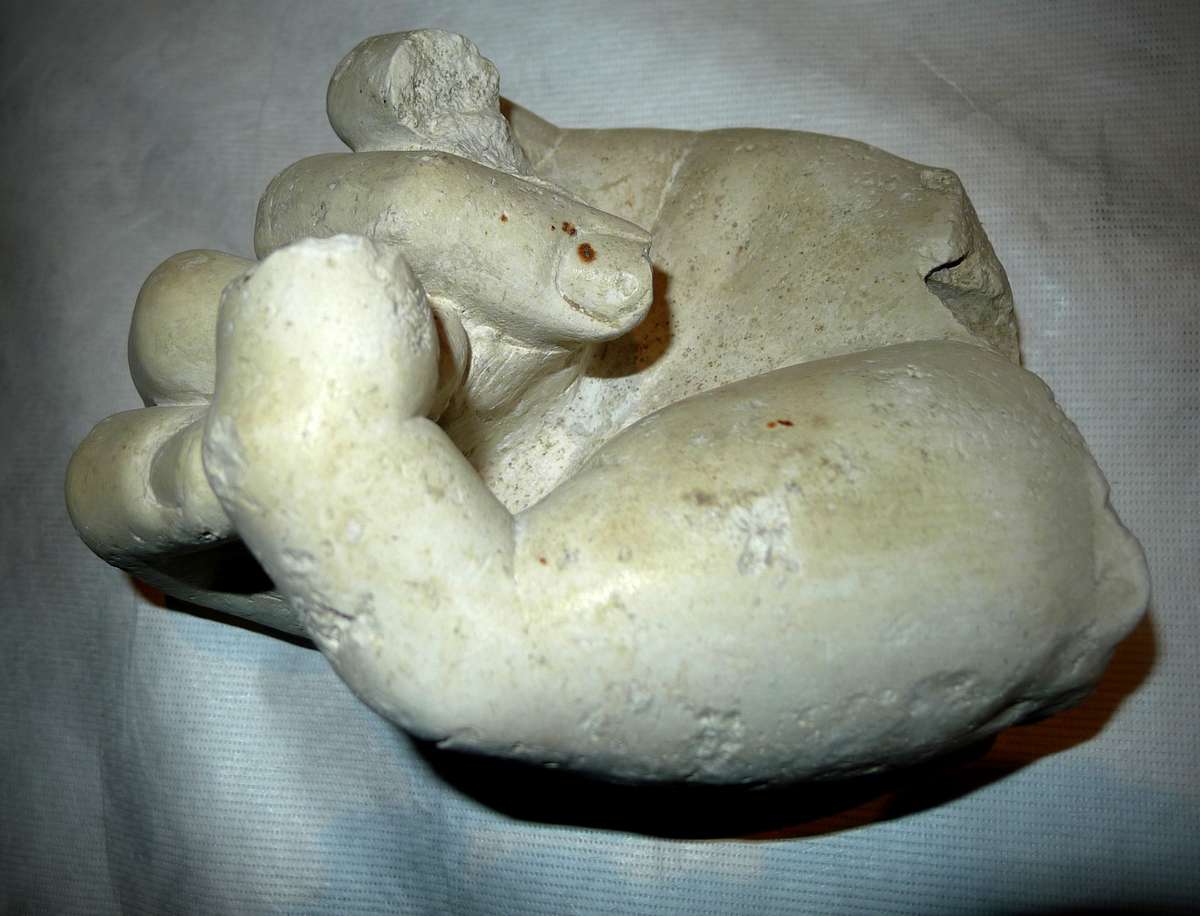 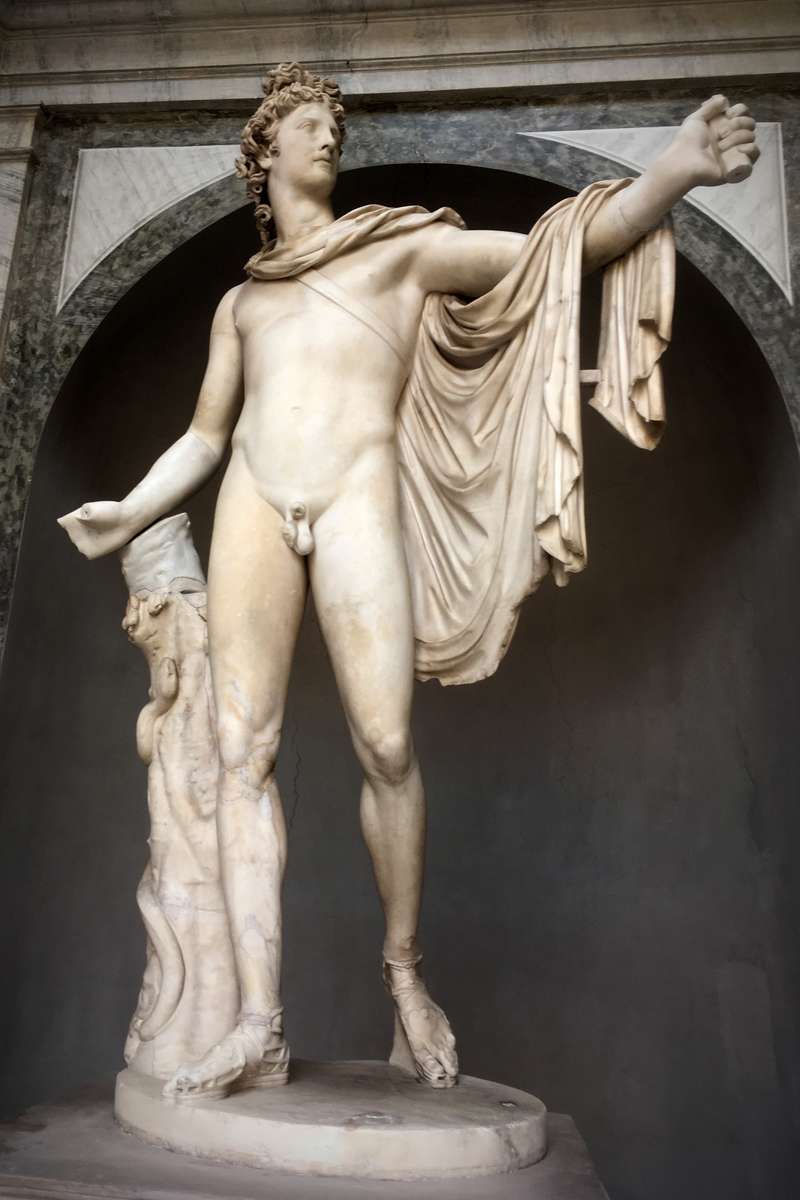 Apollo Belvedere in the Vatican Museums, a Roman copy after a Greek original, the hand has been identified as coming from this statue. Image: Will Mather.

The Museum provided us with two marble statues from Baiae of very fine workmanship. One is a fountain showing a nereid, a female sea sprite, riding a sea monster. There is a lead pipe in the sea monster’s mouth where the water poured out. The nereid’s head is lost as is her billowing cape. A fresco from a villa at Stabiae of the same scene gives an impression of what the complete statue would have looked like. Stabiae was a spa town too – but buried in the eruption of 79 AD. Our fountain was found in a building underwater, and other example of the region’s volcanic nature. 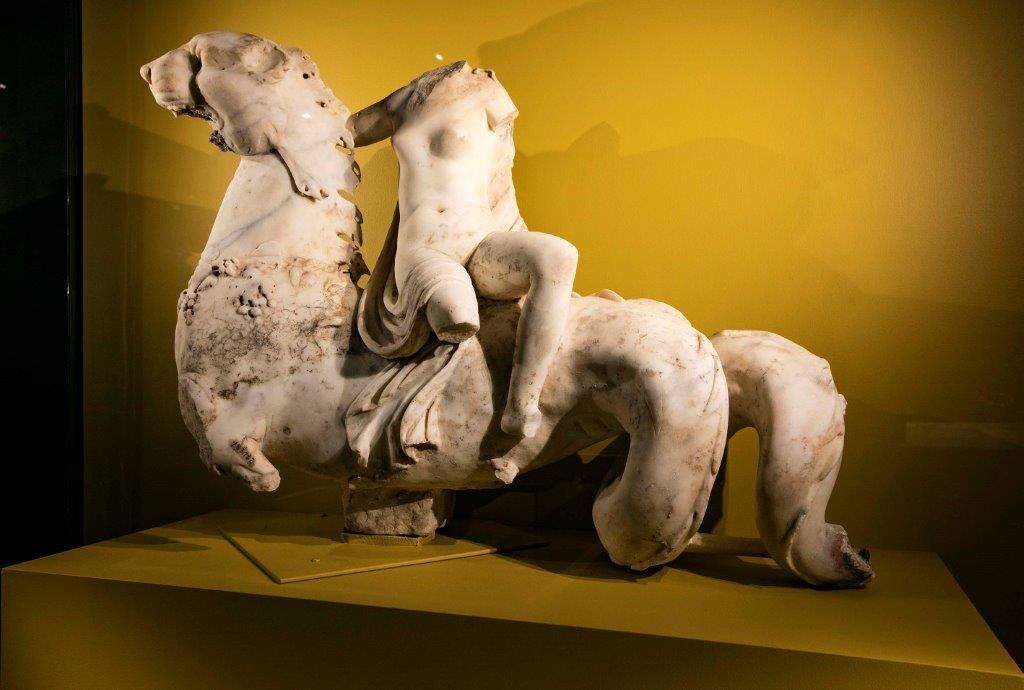 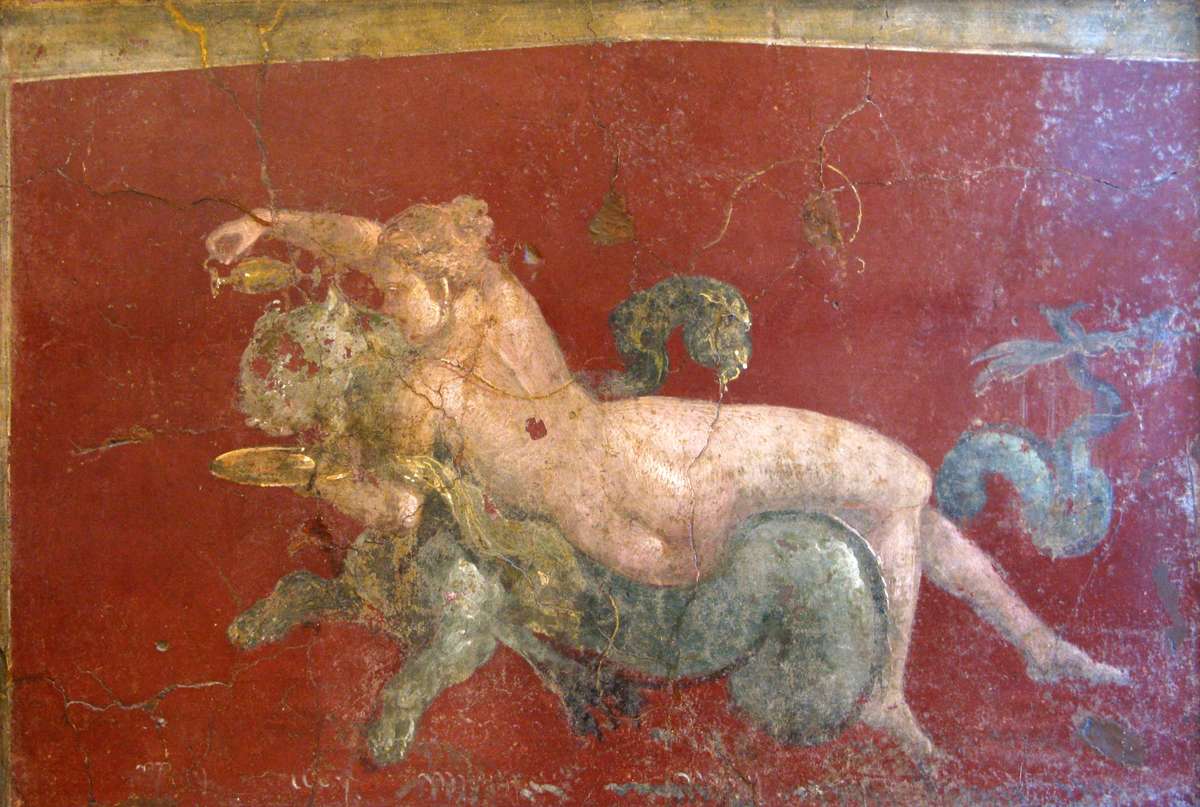 A fresco from a villa at Stabiae of the same scene gives an impression of what the complete statue would have looked like. Image: Nereide su pantera, Museo archeologico nazionale di Napoli via wikicommons.

The second statue is of Hermanubis. It shows a figure of a man in Greek dress with a Jackel’s head and holding the remains of a caduceus the symbol of Hermes in his left hand. Hermanubis was a composite god combining the Egyptian Anubis and the Greek Hermes, in both cultures he was a guide to the souls of the dead. The cult originated in Egypt after it came under the rule of the Greek influenced Macedonians. Given that the Alexandrian fleet sailed to Puteoli, its arrival always a welcome one caused much excitement according to Seneca (Letters LXXVII), it is not surprising to find Hermanubis on the Bay of Naples. Other Greco-Egyptian mystery cults were also popular in the area, in particular Isis, there was a temple to her at Pompeii, and two pieces of jewellery in the exhibition have images of Isis Fortuna holding a rudder she guides the fortunes of mankind. 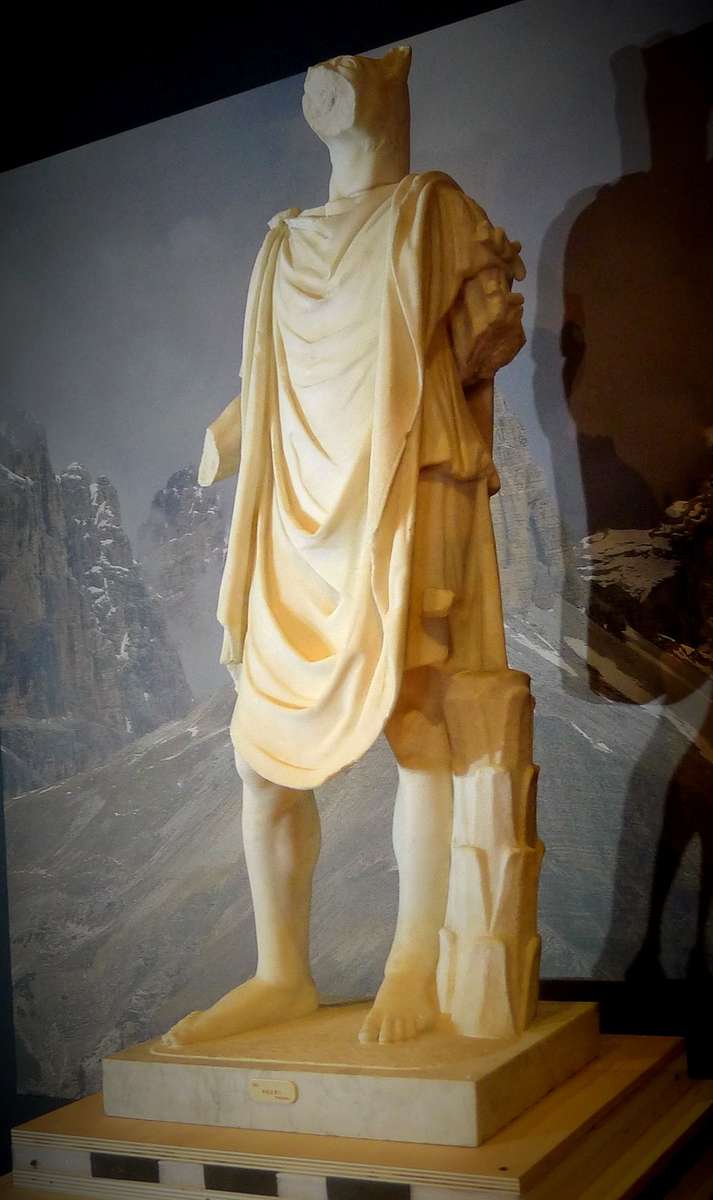 The movement of people and ideas across the Mediterranean is evidenced by another object lent by the Museum. It is a marble altar with the engraved inscription ‘Sacrum Dushares’, sacred to the God Dushares, found in the sea a short distance from Puteoli’s market place on 6 May 1754. Dushares was the chief God of the Nabateans, in the 1st century AD they were an independent kingdom outside the Empire in what is now roughly Jordan. They made their money in the incense trade with southern Arabia. The altar reveals that there was a group of Nabatean merchants residing in the city and celebrating their presence. Over the centuries, the remains of the market place have submerged and re-emerged from the waters of the Bay, the find-spot of the altar is indicative of this. It was not only Pompeii that was affected by the volcanic nature of the region.

The objects from the Parco Archeologico dei Campi Flegrei on display in the exhibtion help put Pompeii in a wider context. Pompeii may have been a small port but it was unusually wealthy and well connected. Thanks to being situated on the Bay of Naples, an important economic powerhouse of the Empire and centre of imperial power second only to Rome. It had access to goods from around the Mediterranean, all only a short sail away at Puteoli.

Similarly, it had access to the elite, including the Emperors themselves, who resided around the Bay near Baiae. Attracted by it’s natural beauty, climate, hot springs and fertility (thanks again to the volcanoes) the coast of the Bay was thickly populated. As the ancient geographer Strabo observed, the entire coast of the Bay of Naples gave the impression of a single city as it was crowded with towns and villas [3].  Misenum was equally as close – Rectina who lived near Pompeii (she had a villa at the foot of Mount Vesuvius), was able to send a message requesting help during the eruption to the Fleet’s Commander Pliny the Elder.

— Will Mather, Curator Escape from Pompeii.

Book your tickets today and discover the story of the Roman Navy in Escape from Pompeii.

View all posts by Will Mather→
Posted in: Exhibitions , Arts and Culture
↑