With midwinter upon us and an ever-so-slight chill in the air, my thoughts go straight to the land of ice, where the darkest day of a four-month twilight darkness means so much – the coming of the sun. Today expeditioners on Antarctica’s scientific bases jump into the icy seas, feast and celebrate with all the ritual and high-jinks befitting the occasion. 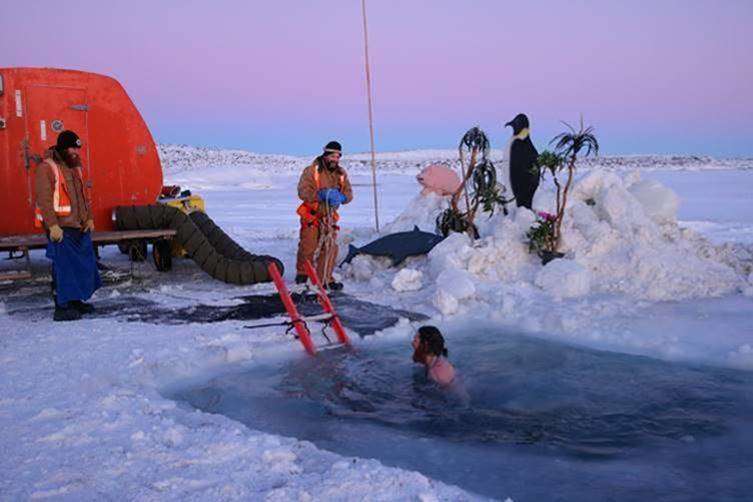 With an air temperature of -33.5°C and the water temperature just -1.8°C, 15 of the team at Davis station plunged through a hole in the sea ice for the traditional midwinter swim.  22 June 2017 Photographer © Robert Bonney courtesy Australian Antarctic Division

Equally so for their forebears 100 years ago. Bold explorers and adventurers – among them Norwegian Roald Amundsen and his team, who sledged into the interior across uncharted ice to claim the South Pole for Norway in 1911.

Lessons from the Arctic – How Roald Amundsen won the race to the South Pole, a panel exhibition on display in ANMM’s Vaughan Evans Library from the Fram Museum in Norway, explores life for those men on their incredible journey. Catch it until June 30, while the sun is low in the sky and think of those men on midwinter day 1911. 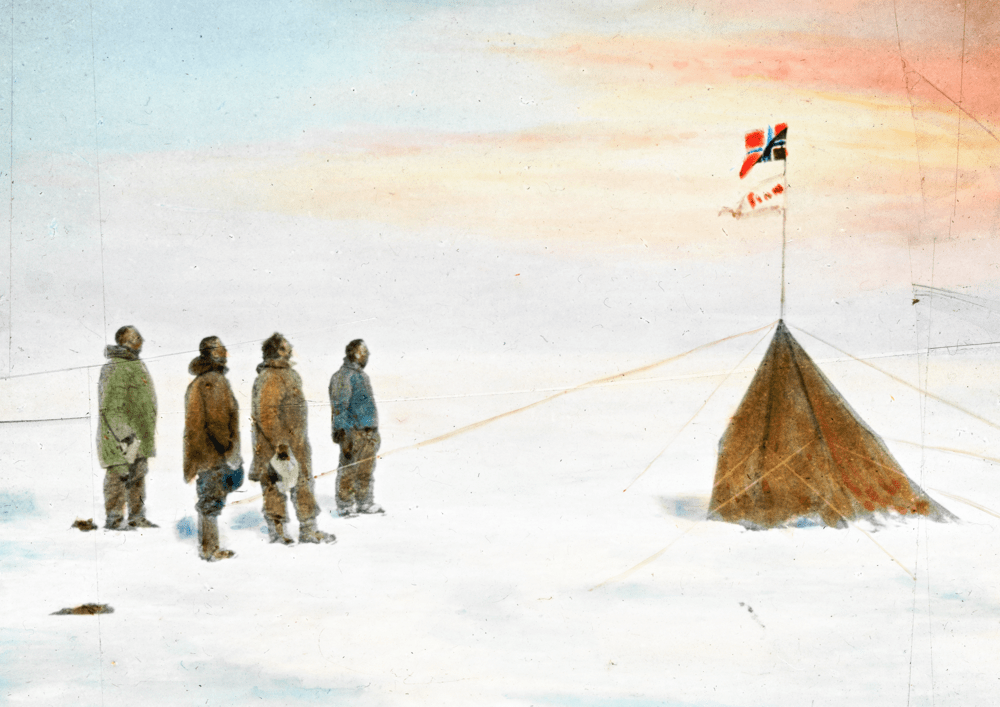 In The South Pole: An account of the Norwegian Antarctic Expedition in the Fram 1910–12 (1913, Cooper Square Press edition 2001) – Roald Amundsen chronicles life in the camp on 23 June, St John’s Eve (St Hans Eve in Scandinavia – there the eve of the summer solstice), as a typical day to show the expeditioners at work and rest.

Their ship Fram had left for the winter in February, the sun had disappeared on 21 April (and would not reappear until 24 August) and Amundsen and his seven-man land party were occupied by their preparations for the polar attempt the coming summer.

On 23 June, the eve of the winter solstice, the men worked only half the day, in honour of the holiday.

For Amundsen, up early to take meteorological readings, the day dawned with the drama of the southern lights ‘like a stream of fire light shoots across the sky’, Amundsen exclaimed, making the sky ‘clear as daylight, and yet the shortest day of the year … it is one of the really intense experiences of the Aurora Australis that receives us now…’ (p 283)

The cook Adolf Lindström also rose early to make dough for breakfast. The men peeled away their sleeping bags and filed outside to brush their teeth – with Stomatol toothpaste … before looking most ‘unlike Vikings’ (p 299) in line for breakfast at 8 am. They redeemed themselves when they filed back inside to attack their buckwheat pancakes with whortleberry jam and butter, followed by hot coffee and tobacco. Then, Amundsen comments, they looked ‘most like Vikings’. Back on went the skin clothing and outside went the men, lanterns in hand, to attend to their dog teams. Helmer Hanssen, Hjalmar Johansen and Sverre Hassel fed and exercised the howling dogs, their food – seal – heard  ’crunching under dogs teeth …’ (p 305).

Amundsen details the day’s activities and adopts the third person to describe the intricate and ingenious layout of Framheim, the camp under the ice the expeditioners named after their ship, and built as a series of accommodations, including wooden sleeping and living quarters and the various workshops and stores lit or warmed by lanterns, lamps or candles and connected by tunnels carved out of the ice shelf. 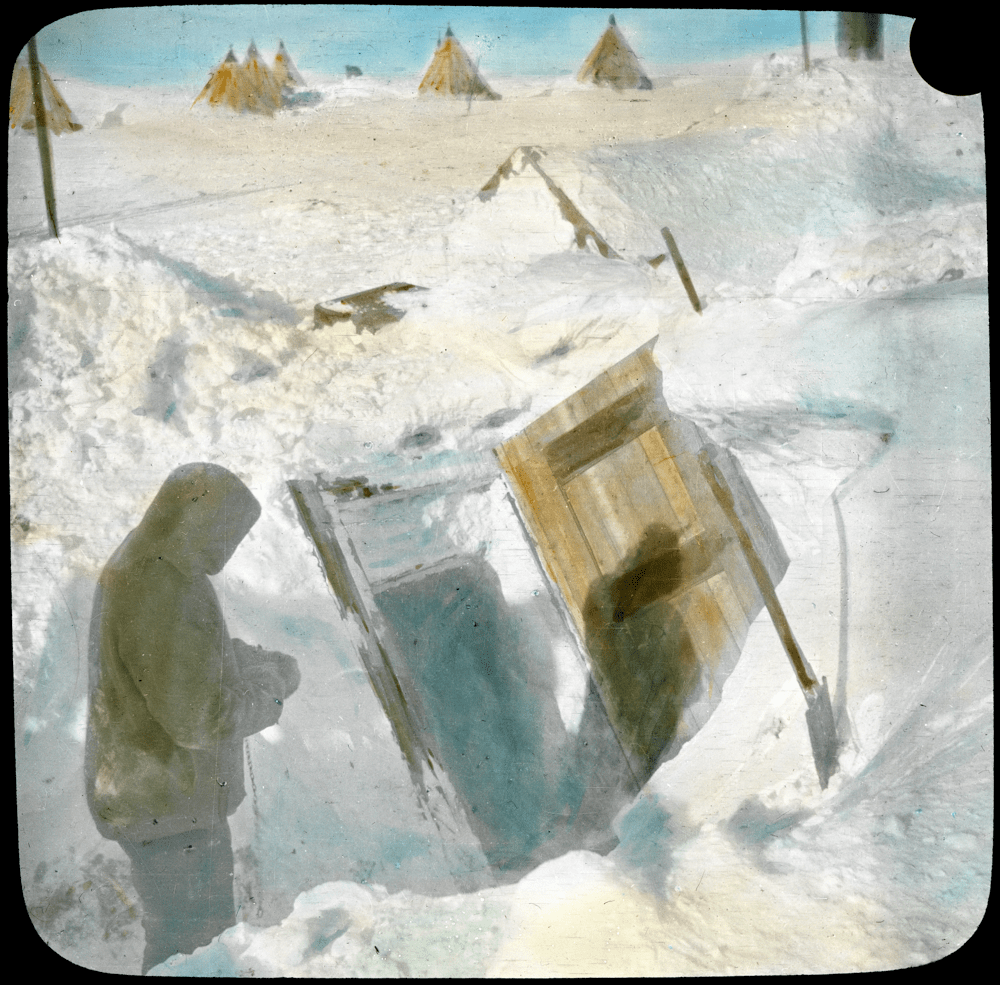 Amundsen’s tour of Framheim takes us through the trapdoor entry and down the stairs to Hassel’s workshop, the wood and oil store, and through tunnels to Olav Bjaaland and Jorgen Stubberud’s carpentry workshop, where they shaved weight from sledges and packing cases. 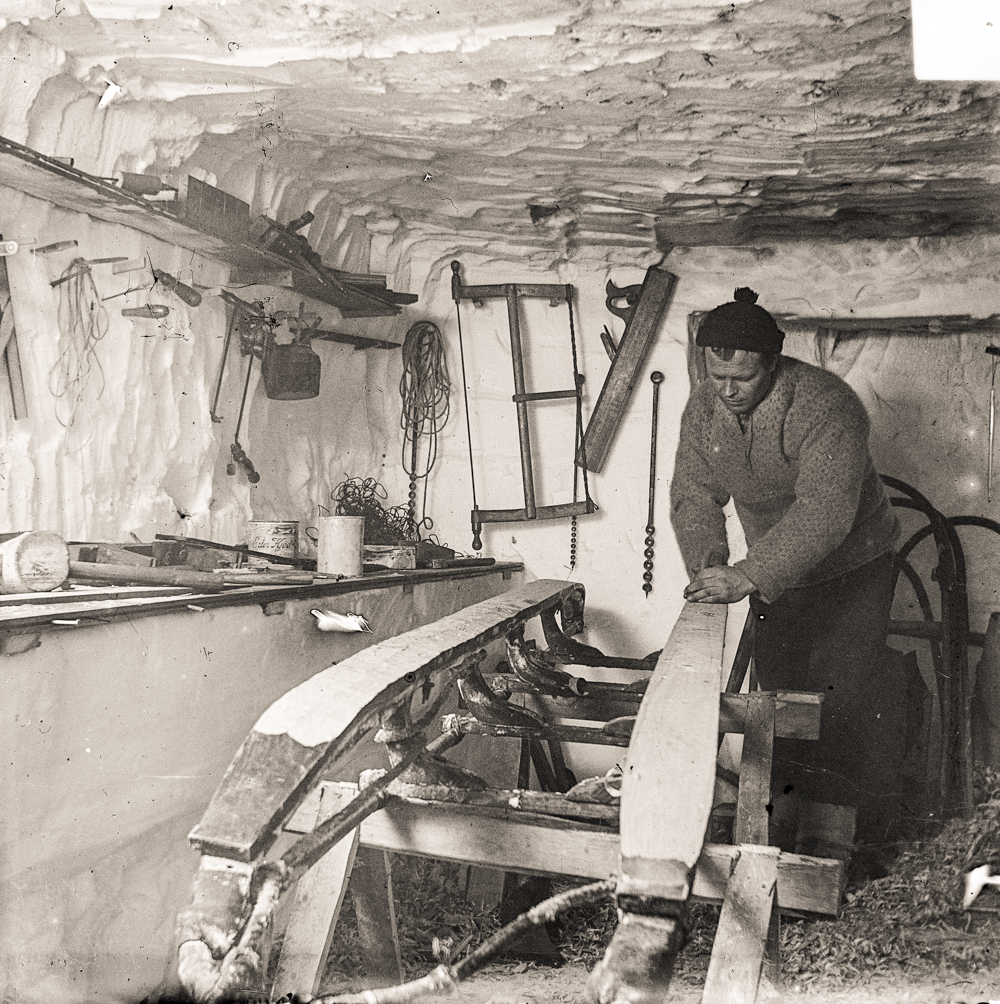 ‘Our sleds lost 2/3 of their weight in the skilled hands of Bjaaland. He also repaired our skiis. The weight of everything we had to transport was reduced in equal proportion. The 42,000 biscuits were repeatedly scrutinised in all detail before they were given their final place. And this was the case for every object.’

The main wooden building, the ‘penthouse’, was for living, dining and sleeping, with its linoleum floor, kitchen, bunks, and loft with library and curtained darkroom. Then to the dark corridor alongside to an empty room with vaulted ceiling, axe and spade – the ice quarry and water supply. 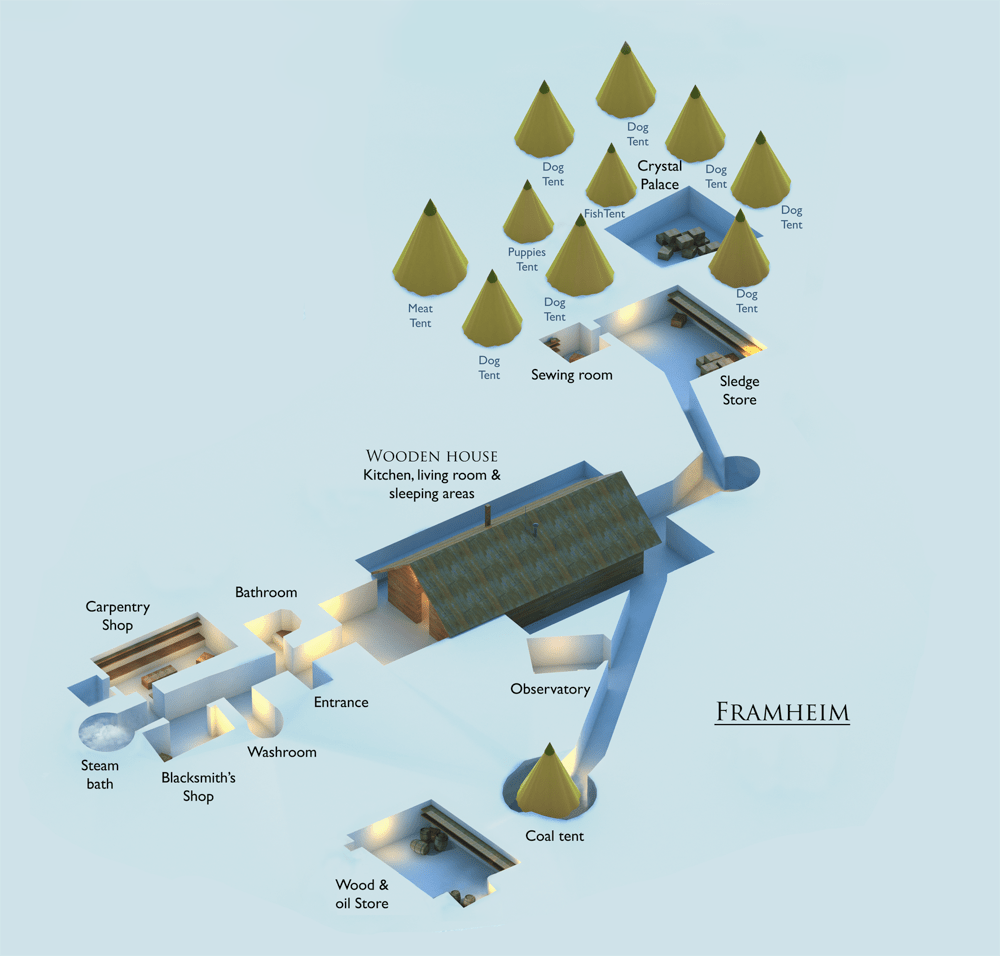 From here another low narrow passage led to the sledge store, where Helmer Hanssen lashed and packed the sledges. It contained piles of clothing, skins, woollen underclothes ‘of immense thickness’, stockings and mitts.

The next room, Oscar Wisting’s ice cabin, featured his ‘modern treadle sewing machine … humming in middle of the Barrier’ (p 319) as he sewed tents and clothing. While outside it was minus 60° Fahrenheit, inside the Primus stove heated the room to 50° Fahrenheit to keep machines and compasses working. The room was sheathed with metal to collect water from the melting ice for washing (p 320).

The hole in the wall tunnel takes the reader to the Crystal Palace for cases being packed by Johansen, so tightly that there was ‘not a fraction of an inch left in that case’ (p 323) with pemmican, with sausages of milk powder and pieces of chocolate forced into spaces to ensure that the packed cases ‘will be as full as if they were of solid wood’. Here were the dog tents.

Amundsen returned to the preparations for the holiday afternoon, when the expeditioners set the table, the bell rang at midday and they sat down to ‘a thick black seal soup, with all manner of curious things in it’ (p 329). These included potatoes, carrots, cabbage, turnips, peas, celery, prunes and apples. A dessert of green plums was followed by a digestive rest with pipes and books on St Hans Eve … With no work that afternoon, the men readied themselves for the festivities that evening.

Most astounding of all were the men’s bathing rituals and facilities. 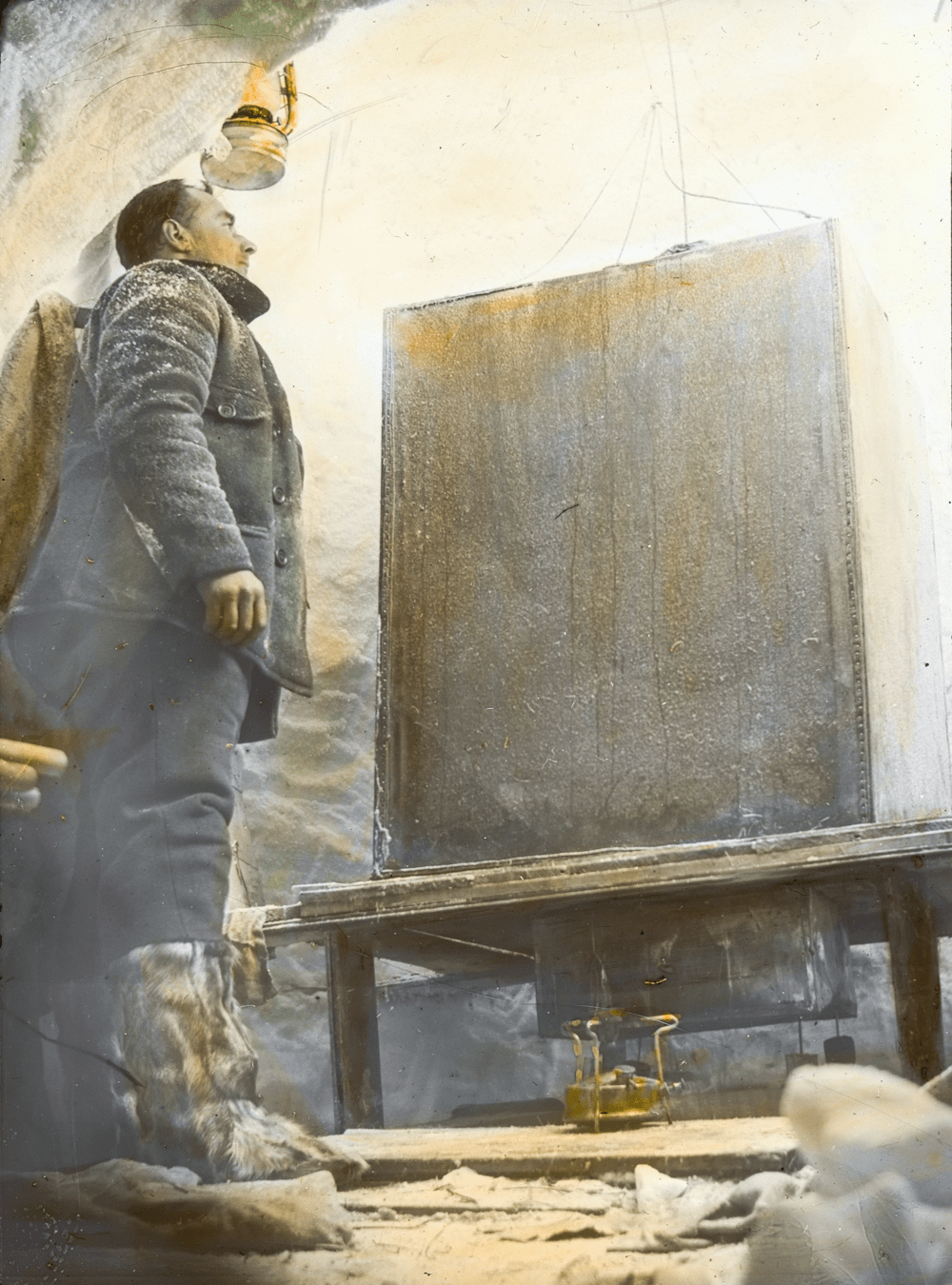 The men had built a steam bath under the ice that they used weekly and for special occasions. They undressed in the penthouse and made their way through a tunnel to a ‘large room covered with rime and closed overhead by a mighty dome of ice’, and were engulfed in a ‘mass of steam’ (p 331).

The steam bath consisted of a folding American-style vapour-bath, ‘very ingeniously contrived’ by Bjaaland and Hassel. The bather raised and lowered the tent by a pulley system.

‘The bath was a big box without a bottom, and with a hole, large enough for a head, in the top. All the walls were double and were made of windproof material, with about an inch between for the air to circulate. This box stood on a platform, which was raised a couple of feet above the snow surface …In the platform immediately under the bath a rectangular opening was cut, lined with rubber packing and into this opening a tin box flitted accurately. Under the tin box stood two Primus lamps…’ (p 333).

The men took their turns, and by 5.15pm when the steam dissipated all were dressed in their furs for the midwinter St Hans Eve feast. The dogs were fed again. It was minus 65° Fahrenheit outside, with winds picking up. Snuggled inside their freshly cleaned penthouse at their freshly laid table decorated with small Norwegian flags, ‘all the Vikings came merrily in’. 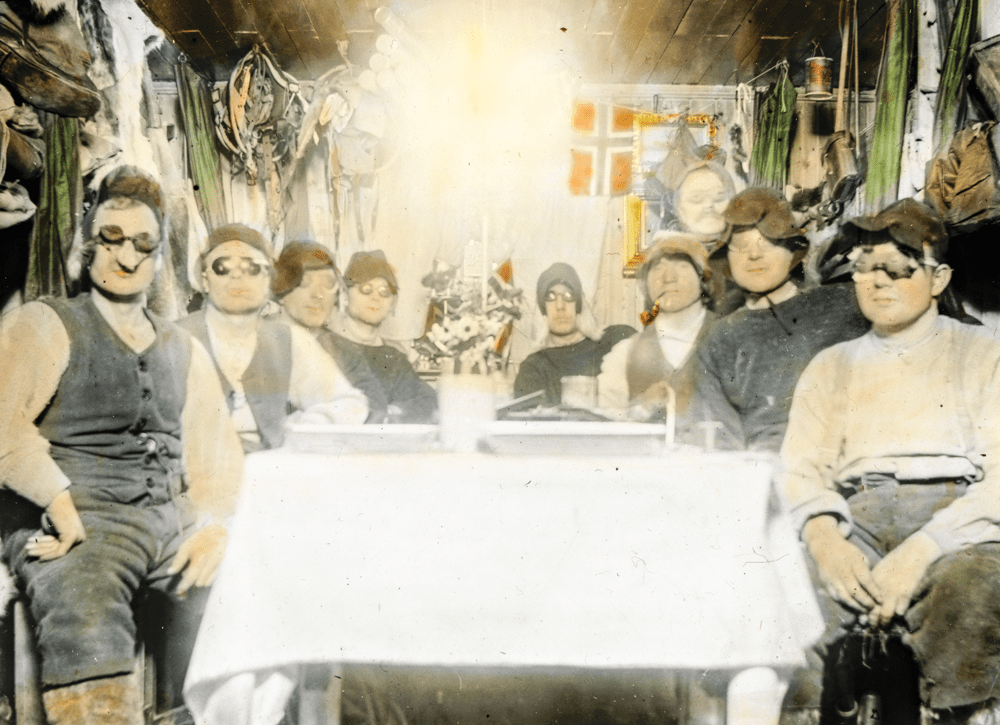 Fram crew in the penthouse showing off their new goggles, each had improvised to design their own Amundsen lantern slide 199 courtesy Fram Museum

The festival began at 6 pm and the men sat down, each to a quart of plum-pudding, huge Napoleon cakes baked of ‘the finest puff pastry, with layers of vanilla custard and cream’, followed by Benedictine and a bottle of punch and their pipes (p 337). As was the custom, ‘Tararara-boom-de-ay’ heralded each man’s favourite music being played on the gramophone; highlights were the ‘Apache waltz’ and ‘Solveig’s song’. The evening was complete with humorous recitations and a game of darts (p 338).

The next day the regular routine of preparations continued. Six months later, 14 December 1911, the team of Roald Amundsen, Helmer Hanssen, Sverre Hassel, Oscar Wisting, champion skiier Olav Bjaaland and their dogs were at the south pole. They celebrated with a piece of seal meat each.

Were we the first? Or? — halt! It sounded like a sound of exultation. The distance was covered. The goal reached. Calm, so calm stretched the mighty Plateau before us, unseen and untrod by the foot of man. … It was undeniably a moment of solemnity when all of us with our hand on the flagstaff planted the colours of our country on the geographical south pole, on King Haakon the 7th plateau.

Amundsen in his lecture to the Royal Geographical Society, 1912, in Cold recall: Reflections of a polar explorer, Geir O Klover Fram Museum 2009 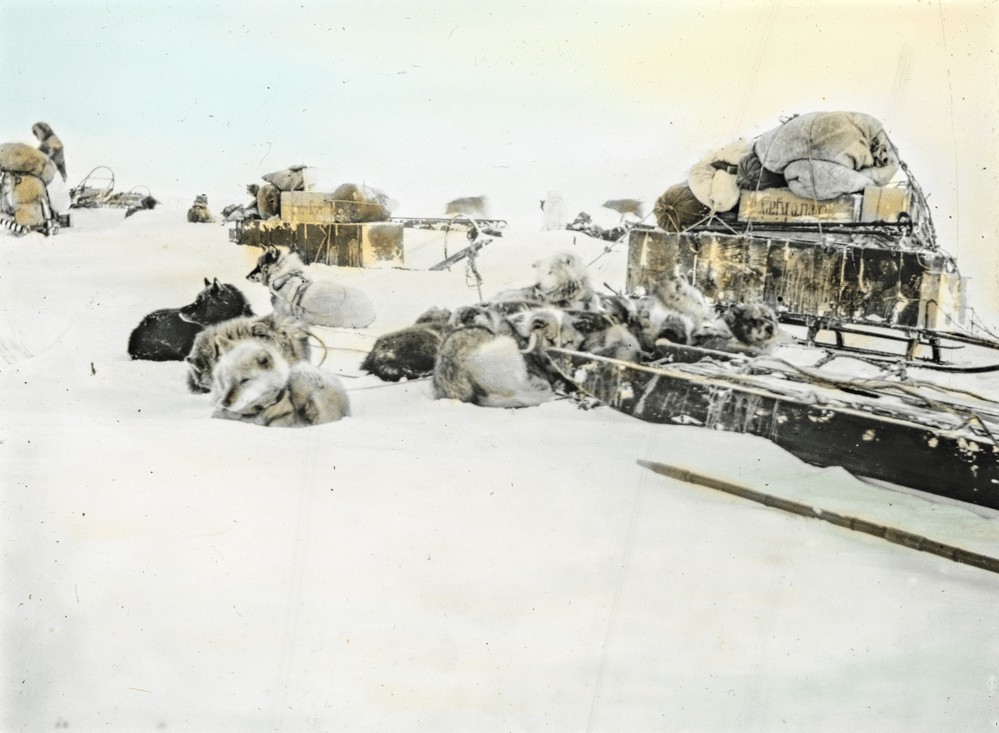 The sleds ready for the journey to the Pole 20 October 1911; packed and ready for the departure photographer unidentified, courtesy Fram Museum 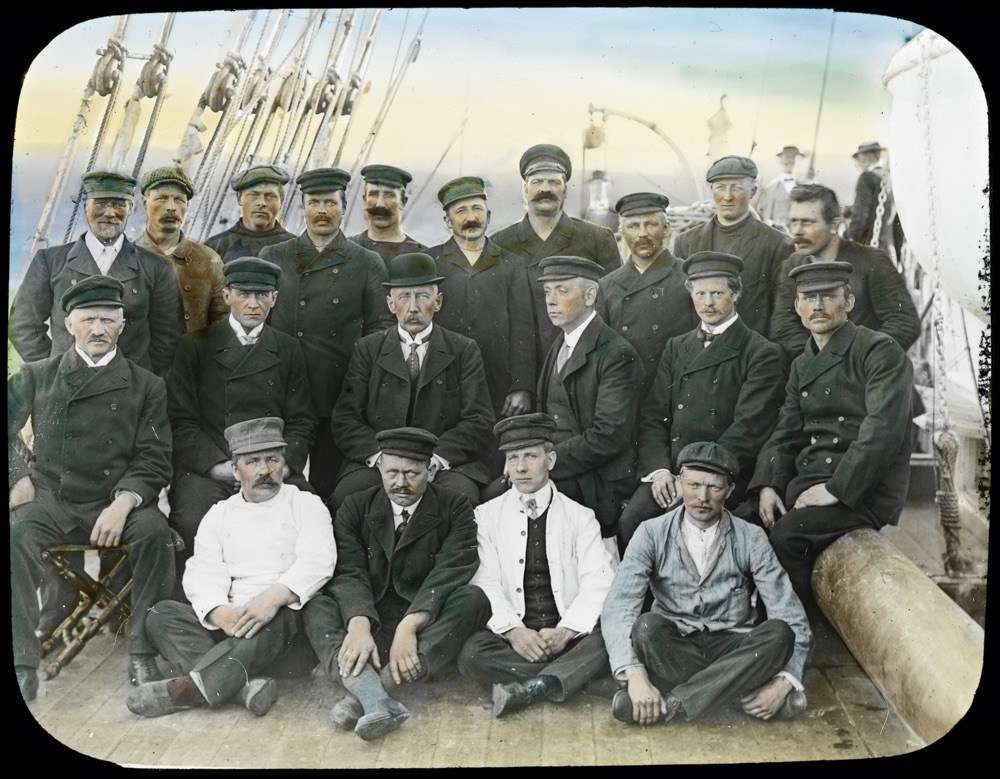 Inside the tent in a little bag I left a letter, addressed to HM the king Haakon, giving information on what we had accomplished. The way home was a long one, and so many things might happen to make it impossible for us to give an account of our expedition. Besides this letter I wrote a short epistle.

Lessons from the Arctic closes June 30.

View all posts by Daina Fletcher→
Posted in: Exhibitions , Arts and Culture
↑