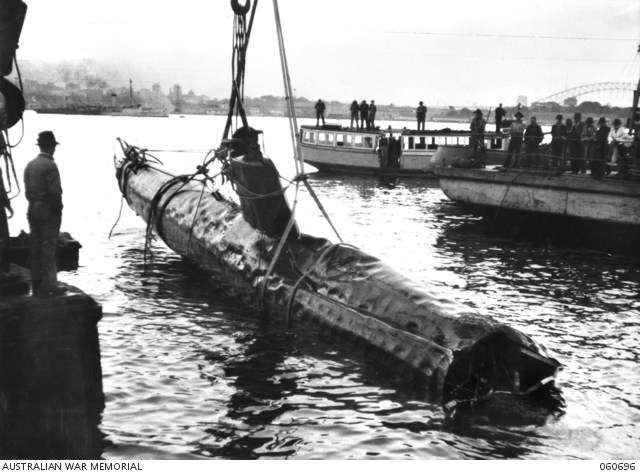 The wreck of M14 being recovered. Image: Australian War Memorial, via Wikimedia.

My mother has often told me this story of the evening of Sunday 31st May 1942:

‘It had been a normal Sunday: Church, followed by lunch, a visit to my grandparents, some radio and then suddenly, while I was taking a bath, sirens split the air, Dad turned off the lights, and I shivered in the dark.’

It’s hard to imagine an enemy so audacious that it would simply sail into Sydney Harbour and attack the city. But Sydney Harbour is peppered with the remains of nineteenth-century fortifications built to defend the city against seaborne attacks by Spain, France and Russia, which never eventuated. These included barracks, gun emplacements, munition stores and even electrically activated underwater minefields operated from Chowder Bay between 1876 and 1922. There are fortifications built during WWII, especially after war with Japan was declared at the end of 1941 when the enemy was suddenly next door, rather than half a world away. 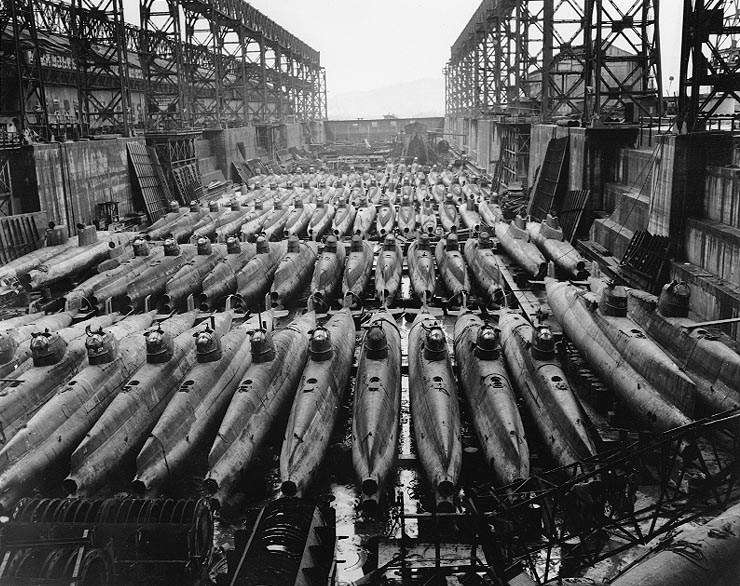 The Japanese Type A Kō-hyōteki-class submarines that attacked Sydney in May 1942 were the same as those used in the attack on Pearl Harbor, Hawaii in December 1941. They were 23 metres long, 1.8m wide, battery powered, with a crew of 2 and carried 2 muzzle loaded 450mm dia torpedoes and a 140kg scuttling charge. Image: Official U.S. Navy Photograph, now in the collections of the National Archives, via Wikimedia.

On that late May night in 1942, Sydney was being attacked by three ‘baby’ Type A Kō-hyōteki-class submarines launched from larger ‘mother’ submarines lurking just off the entrance to the harbour.

At 9 pm a baby sub M14 was detected entering the harbour by the magnetic submarine detection loop running along the ocean bed. but was ignored as simply ‘traffic’ in the busy port.

Around 9.15 pm, M14 became entangled in the almost completed torpedo and submarine boom net being built across the harbour and broke the surface. A watchman rowed out to investigate, saw the submarine and reported the situation to the patrol boat HMAS Yarroma, which in turn sent a report to the Royal Australian Navy (RAN) Headquarters.Yarroma and another patrol boat HMAS Lolita, were dispatched to investigate and Yarroma dropped two depth charges which failed to detonate because of the shallow water. At around 10.35 pm, unable to escape, the two Japanese submariners on board M14 used the scuttling charge included in their vessel’s armaments to sink the vessel.

M24 was the second submarine to enter the harbour. On its way, it grazed the hull of HMAS Falie, a schooner requisitioned by the RAN to patrol Sydney Harbour. M24 crossed the detector loop at 9.28 pm and then shadowed a Manly ferry as the boom net was opened to let the ferry through to Circular Quay. At 10.52 pm the submarine was spotted by a searchlight operator on the American heavy cruiser USS Chicago, which was docked at Garden Island. Chicago opened fire with a 135mm gun and M24 fled west towards the Harbour Bridge where it lay low, before returning east two hours later, ready to torpedo USS Chicago.

By 10.50pm, M21 was the third submarine to breach the harbour and was spotted by the unarmed patrol boat HMAS Lauriana. Six depth charges were unleashed by anti-submarine vessel HMAS Yandra and then M21 seemingly disappeared.

M24 re-entered the fray around 1.30am. Just off Bradley’s Head, with USS Chicago in its sights, M24 fired two torpedoes – both missing the 182 metre long Chicago. One torpedo scudded under the Dutch submarine K-IX and the converted passenger ferry HMAS Kuttabul but then detonated against the breakwater where the Kuttabul was tied up. Kuttabul was broken in two, killing 19 Australian and two British sailors, and wounding ten. 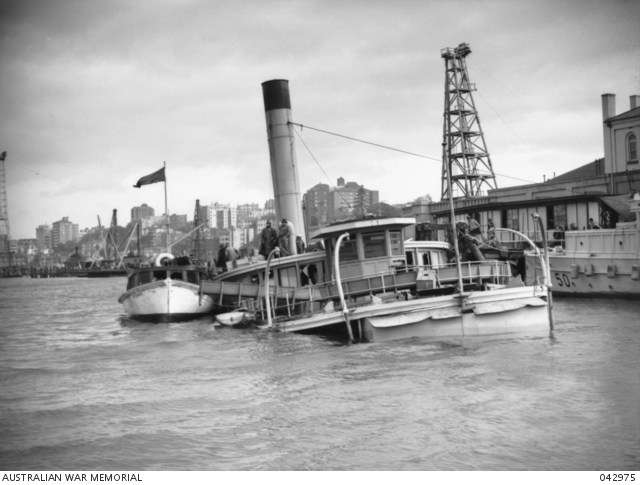 The other torpedo ran aground on the shore of Garden Island without exploding. M24 submerged and left the harbour. 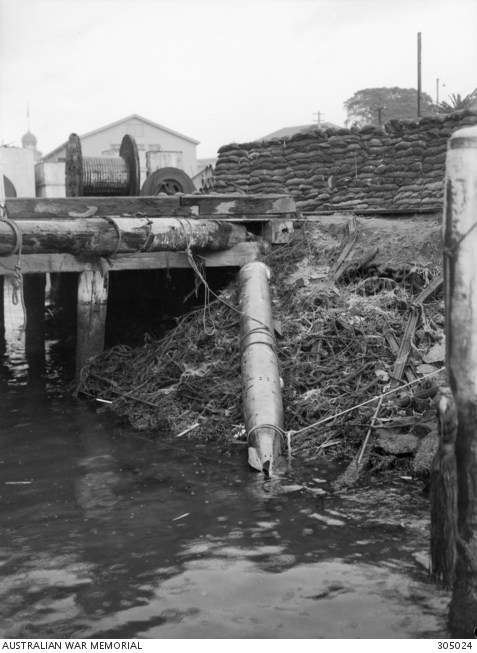 One torpedo ends up on the shore of Garden Island. Image: Australian War Memorial, via Wikimedia.

To avoid becoming ‘sitting ducks’, HMIS Bombay, HMAS Whyalla, HMAS Canberra, USS Perkins and USS Chicago immediately prepared to leave the harbour. On their way out of the USS Chicago spotted a periscope … M21 was coming back in after recovering from the depth charge attack by Yandra.

At 3.50 am the converted passenger liner HMAS Kanimbla fired on M21 in Neutral Bay. It was sighted again in Taylor’s Bay around 5 am and HMAS Seamist dropped two depth charges. The submarine surfaced and then sunk. A barrage of 17 more depth charges followed, from HMAS Steady Hour. Inside the crippled, cramped, hot and airless submarine the crew of M21 committed suicide.

The attack continued early on the 8th June, two of the Japanese ‘mother’ submarines returned. I24 briefly shelled Sydney’s Eastern Suburbs and I21 shelled Newcastle, aiming for the BHP steelworks there. 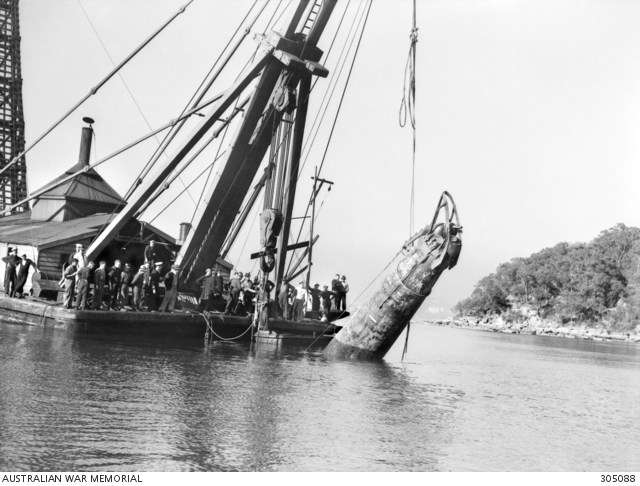 The wrecks of M14 and M21 were recovered on the 8th June and pieced together to make up one submarine which toured NSW, Victoria and South Australia to raise funds for wartime charities. The composite submarine is now displayed at the Australian War Memorial in Canberra.

Souvenirs purportedly made from the wrecks, and postcards were soon in circulation among a populace both intrigued and terrified by this brush with the war in the Pacific.

The ashes of the four Japanese submariners recovered from the wrecks were repatriated to Japan on board Kamakura Maru in October 1942. 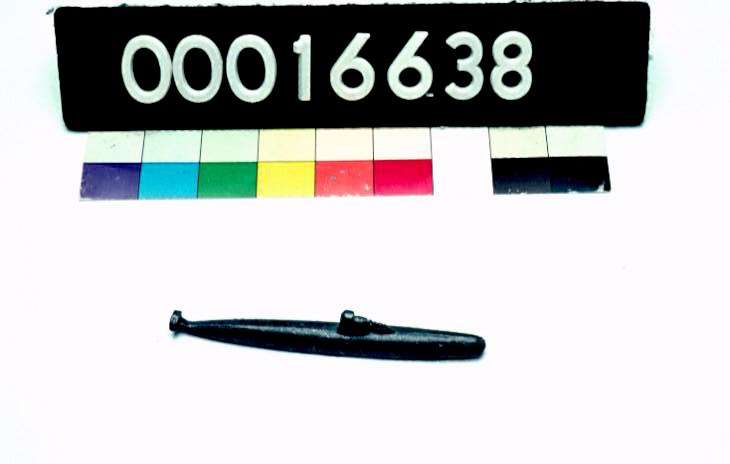 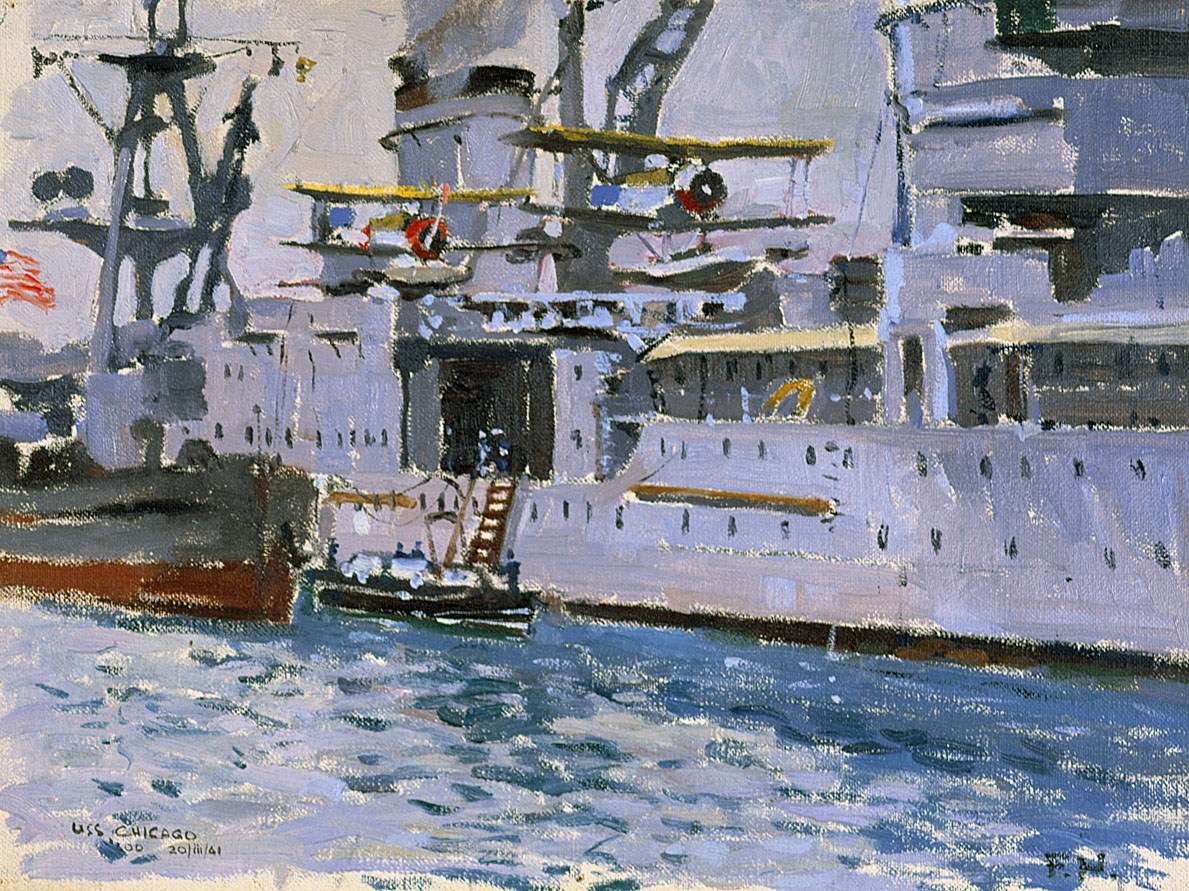 A close-up view of the starboard side of the cruiser USS Chicago by Frank Norton. ANMM Collection 00006210. 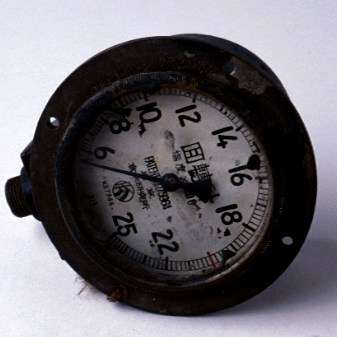 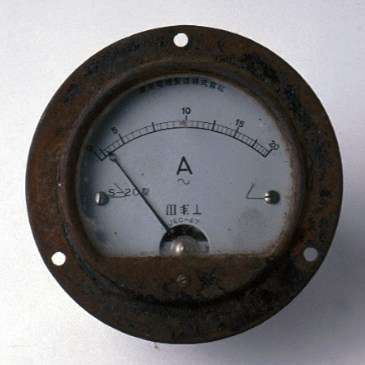 But what happened to M24?

In 2006 a group of seven amateur scuba divers found the submarine sitting upright on the seabed 55 metres below sea level and approximately 5 kilometres east of Bungan Head, about 18km north of Sydney Harbour.

You can find out more about M24 and it’s current management plan at NSW Office of Environment and Heritage.

View all posts by Richard Wood→
Posted in: USA Programs , From the collection , Navy and defence
↑