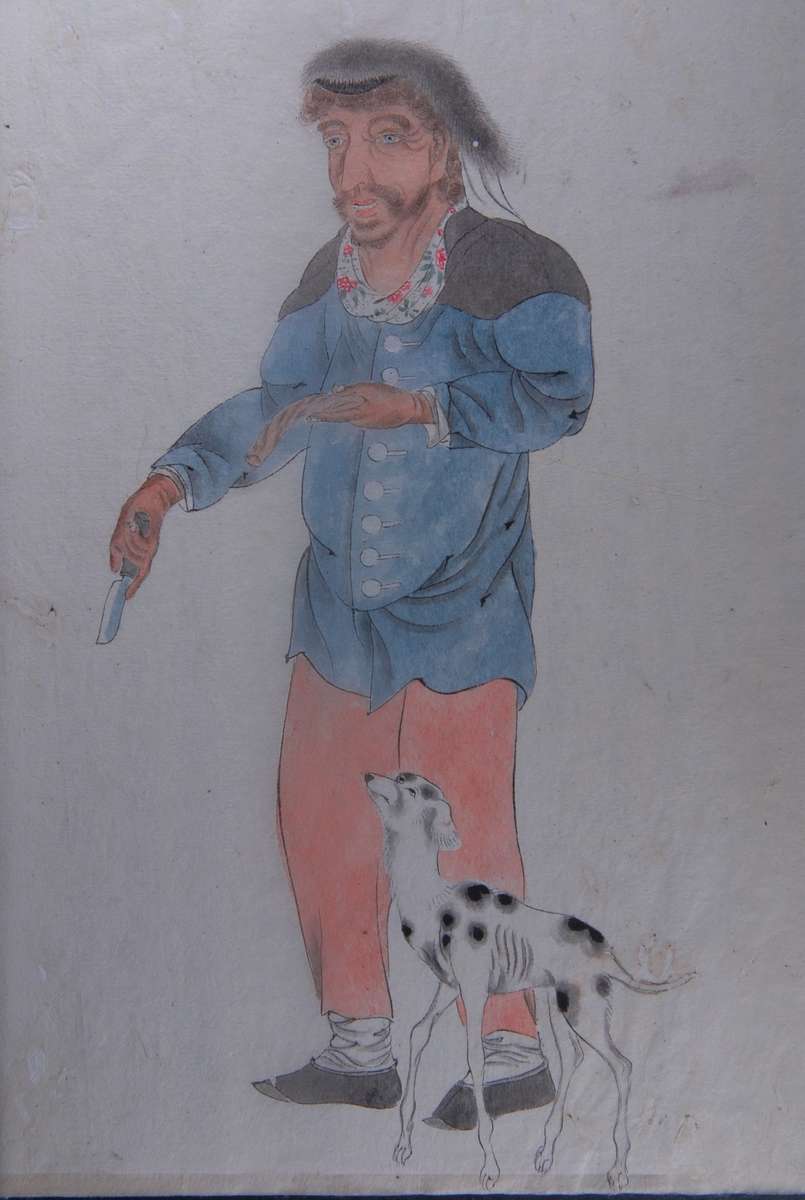 船員と犬 A watercolour of a foreign sailor and his dog by Japanese Samurai artist Makita Hamaguchi in 1830. Image courtesy of Tokushima prefectural archive

In the early 19th century Japan had closed its doors to foreign ships in an effort to resist colonisation. One day in January 1830, a British flagged ship appeared off the coast of Mugi, in Shikoku, southern Japan. A low-ranking Samurai official duly recorded information about the ship and its crew before being ordered to send it away by firing cannon at the vessel. The ship, the brig Cyprus, was in fact a pirated vessel with a crew of escaped convicts from Tasmania under the command of the self-styled ‘Captain William Swallow’. Until now, this wonderful record of Australian pirates in Japan has been sitting, unrecognised in a Japanese archive. 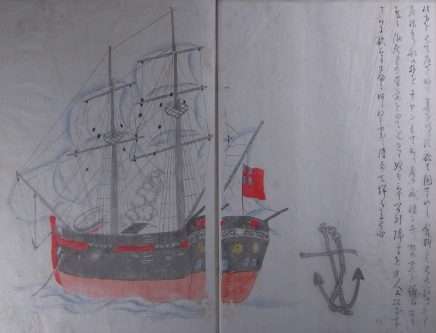 Earlier this year, Nick Russell, a Japan-based English teacher and history buff, came across this wonderful manuscript with images in the Tokushima archives. It showed a meticulous documenting of the visit of a British ship in 1830, at a time when any ‘barbarian’ vessel had to be reported and probably turned away. Japan had instituted an isolationist policy under the Tokugawa shogunate from the mid-1600s. Called ‘Sakoku’ 鎖国 or ‘closed country’, severe restrictions were placed on the entry of foreigners which remained in place until the ‘gunboat diplomacy’ of American Commodore Perry forced the opening of Japan to trade with all western nations in 1866.

Nick Russell became intrigued with the manuscript and finding out what vessel it may have been. He came across references to the capture of the brig Cyprus by convicts in Tasmania and their journey to Japan and then China in 1829-1830. While many historians had thought the visit to Japan may have been an embellishment of an escape story, Nick’s detective work – published recently in The Guardian newspaper – and the NSW State Library’s Warwick Hirst (author of The Man Who Stole the Cyprus) have confirmed it. Nick has brought to life a maritime connection between Australia and Japan from early 19th century – at the height of Japan’s isolation from the world. 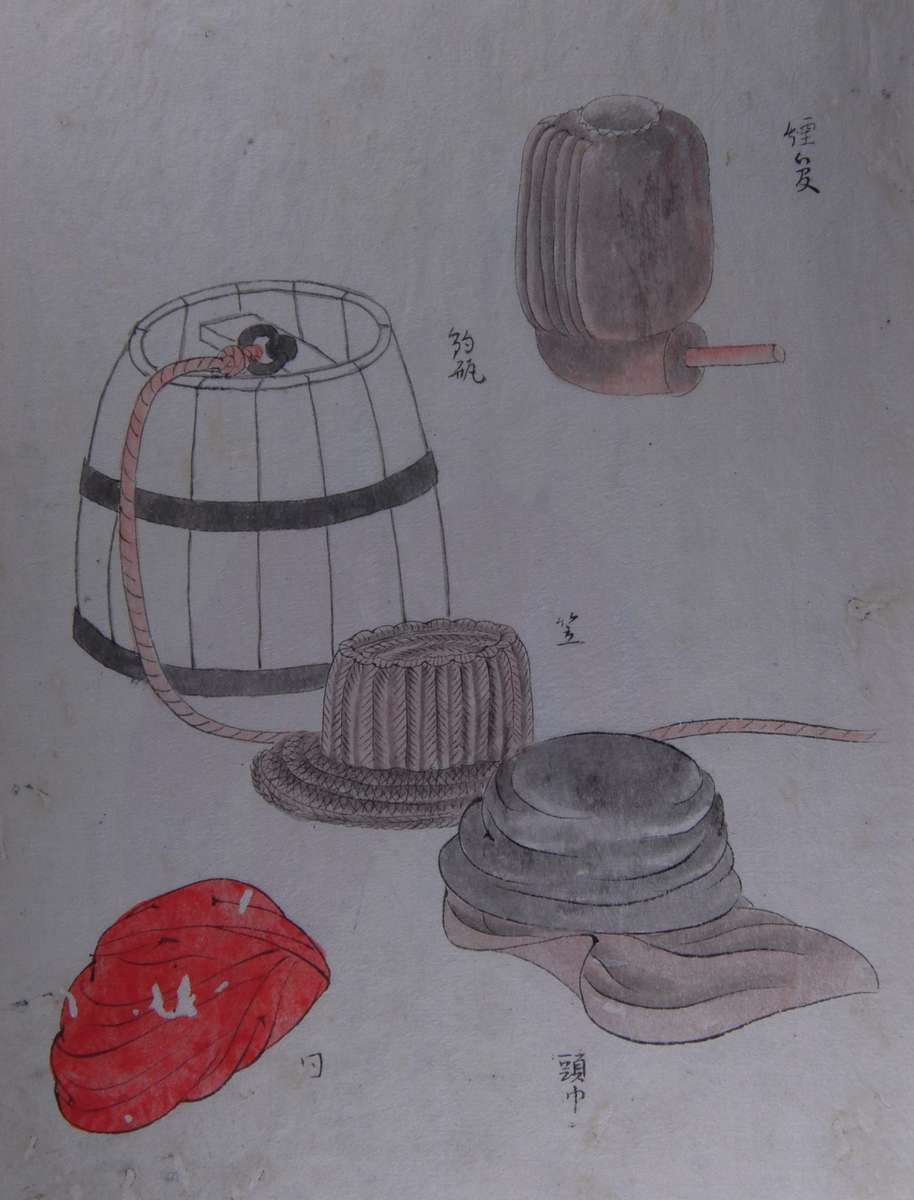 The brig Cyprus had travelled a long way from Tasmania. Before this it was transporting a group of convicts from Hobart to Macquarie Harbour in 1829, when a group of them took an opportunity to seize the vessel, put their guard ashore and sail away – with a rough plan of heading to Tahiti or China.

William Walker, a onetime British cargo ship apprentice and naval conscript in the Napoleonic wars, had been sentenced to transportation to Van Diemen’s Land (Tasmania) and escaped once before, in 1820. He made it back to England but William was again caught stealing, and again sentenced to transportation. Luckily he had changed his name to William Swallow, as he would have been sentenced to death if his previous escape was known.
After being transported to Tasmania in 1828 for the second time, William Swallow found himself on the Cyprus heading for Macquarie Harbour – described by the convict poet Frank MacNamara as ‘that place of tyranny’. The Cyprus was stocked with provisions and this may well have tempted some of the convicts to take over the ship. They chose a moment when the vessel had been sheltering at Recherche Bay and as sung here in 1961 by J. H. Davies and in the words of Frank the poet ;

Twas August eighteen twenty nine, with thirty one on board,
Lieutenant Carew left the Brig, and soon we passed the word.
The Doctor too was absent, the soldiers off their guard,
A better opportunity could never have occurred.

Confined within a dismal hole, we soon contriv’d a plan,
To capture now the “Cyprus”, or perish every man,
But thirteen turn’d faint-hearted and begged to go ashore,
So eighteen boys rush’d daring, and took the Brig and store

They marooned the soldiers, sailors and those convicts who chose not come with them on the beach at Recherche Bay and 18 men sailed away towards New Zealand. The convicts set about renaming and repainting the vessel. They cut off the figurehead and forged a set of ship’s papers and a false log of a ‘voyage’ from Manila to South America. In a remarkable journey, the duly elected ‘Captain’ Swallow sailed the Cyprus to the Chatham Islands and on to Tonga.
Here the crew were divided about where was best to escape the authorities – in the ‘Friendly Isles’ of Tonga or further away from New South Wales to either China or Japan. According to Swallow, the ‘China faction’ forced him to navigate the ship and left the other seven members of the ‘Tonga faction’ on the island of Niue. As Swallow later wrote;

They imprisoned me in the Cabin and kept me eight hours there when they ordered me to come upon Deck and Steer the Ship to Japan.

When they made Japan, Swallow and his crew may not have realised there was a closed door policy. The ship anchored on 16 January 1830 off the town of Mugi, on Shikoku island, where Makita Hamaguchi, a samurai sent disguised as a fisherman to check the ship for weapons met them and meticulously detailed their ship, equipment and whatever he could understand via sign language. After several days they were forced to leave. 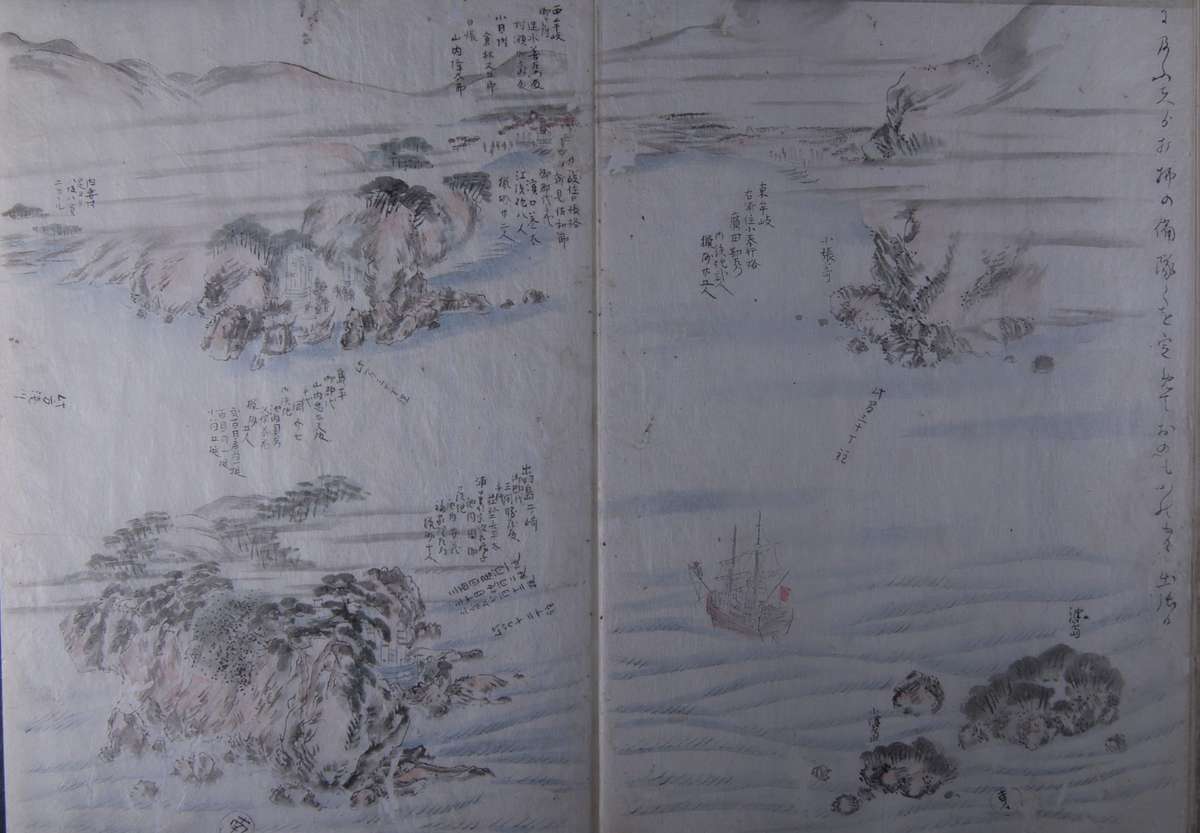 異国船対応配置図 Watercolour of a map for the placement of foreign ships off the coast of Mugi, in Shikoku, Japan in 1830, by Samurai artist Makita Hamaguchi. Image courtesy of Tokushima prefectural archive

But now, the translation of Hamaguchi’s manuscript is revealing new details to researchers of a wonderful cross-cultural exchange that occurred at this time that will prove to be an important document for both Japanese and Australian history.

As to Captain Swallow, he and his men made it to China, where they obtained passage as crew back to London. Unfortunately, after such an epic journey, they came undone. With varying stories of their adventures and then recognised by a Hobart gaoler who was in London at the time, they were gaoled and tried for piracy.

The pirates of the brig Cyprus caused a great stir amongst the public in London and the Old Bailey was packed for a trial that led to the last ever executions for the crime of piracy in England. The tale of convict pirates had captured public imagination and was dramatized as a play in London theatres.

Two of the pirates were hanged but William Swallow escaped the gallows to be transported to Australia – for a third time. He died of consumption in Port Arthur in 1833 and was buried in an unmarked grave on the ‘Isle of the Dead’.

However the possibilities of escaping the dreaded prisons of Van Diemen’s Land inspired other piratical seizures of vessels by convicts. Indeed, the history of piracy by convicts in Australia is a long one – from the voyage of Mary Bryant in 1791 to the 1834 seizure of the brig Frederick by convicts in Macquarie Harbour and sailed to South America, there were many (mostly unsuccessful) instances of piracy.

The height of the scourge of piracy in the 18th century was over by the time of settlement in Australia. But a new and often forgotten chapter in the history of piracy had begun – convict escapes, often driven by a mix of criminality and a desire for ‘Death or Liberty, and a ship to take us home!’

You can read more by Stephen about Australian pirates here and here.

ABC News article on solving the mystery of an Australian pirate ship in Japan.

Sydney A Spence The Mutiny & Piratical Seizure of the Convict-brig Cyprus, etc.; Being the Apprehension, Trial, Sentence, of the Mutineers, 1968