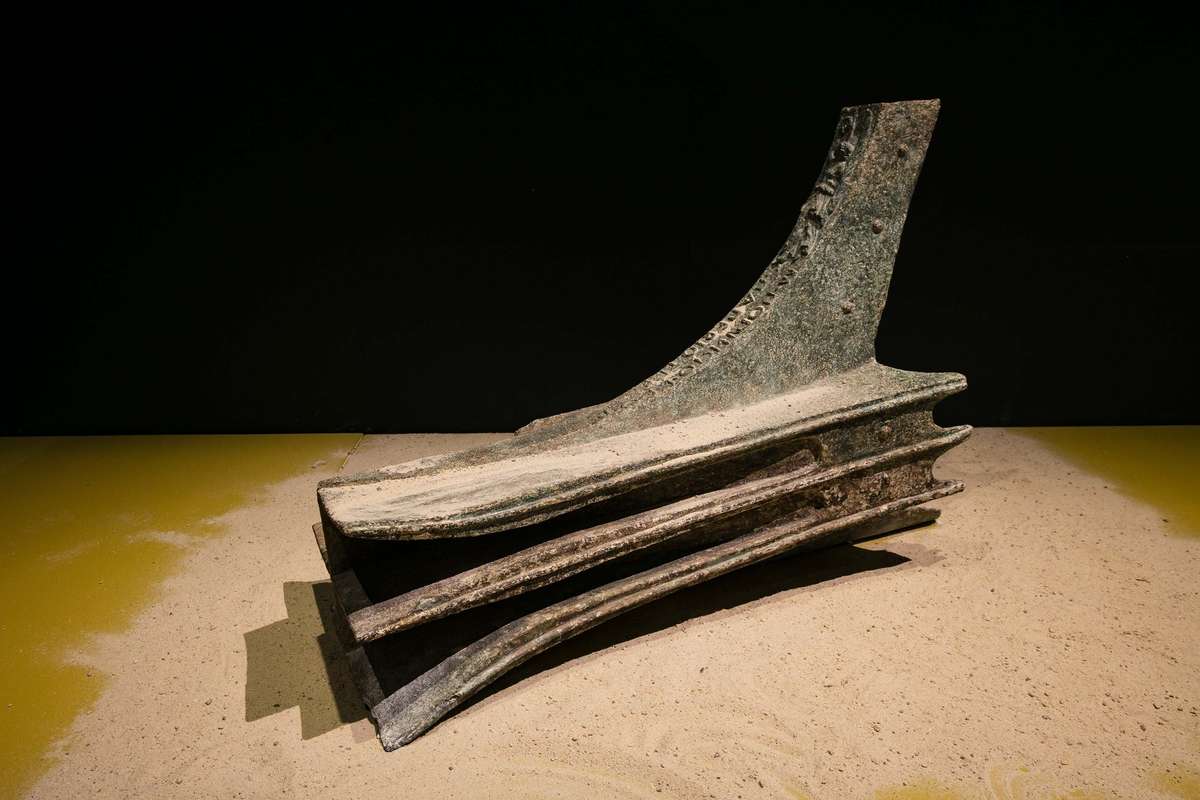 The rostrum in Escape from Pompeii. Image: Andrew Frolows / ANMM.

One of the most amazing objects in Escape from Pompeii: The Untold Roman Rescue is a rostrum from a Roman warship. A rostrum is a bronze ram attached to the bow of an ancient warship. It was used to punch holes into the hull of enemy ships to disable or sink them. The Roman historian Livy gives a description of their use at the Battle of Side in 190 BC:

Whenever a ship encountered an enemy vessel head on, it either shattered its prow, or sheared off its oars; or else it sailed through the open space in the line and rammed it in the stern[1]

This particular rostrum was found off the Egadi Islands, to the west of Sicily. We know from ancient sources that this was the site of the Battle the Egadi Islands (called the Aegates Islands by the Romans), fought on 10 March 241 BC.

The battle was fought between the Roman and the Carthaginian fleets. The Carthaginians, from Carthage in modern Tunisia, had used their fleet to establish a trading empire encompassing the north African coast, southern Spain, Sardinia, Corsica and western Sicily. The Romans had been drawn into conflict with them over the control of Sicily. 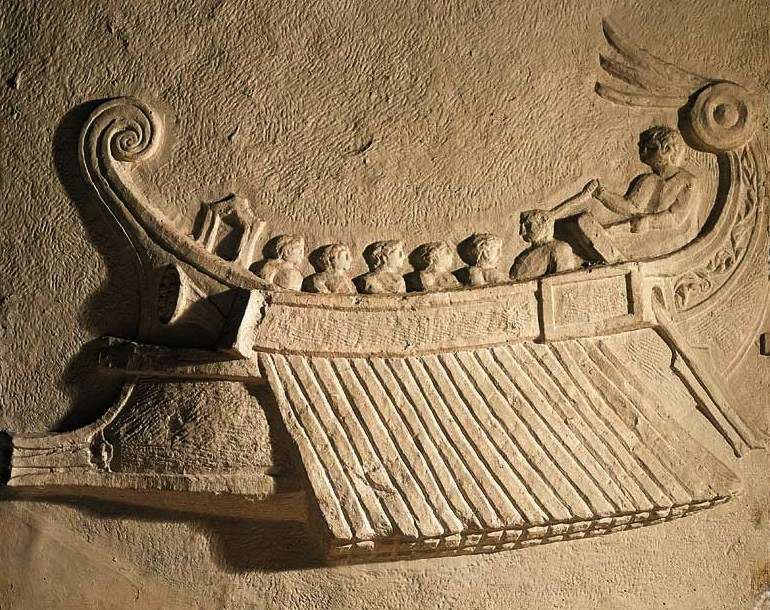 The resulting war, called the First Punic War, dragged on for over twenty years. The outcome of the battle was a resounding Roman victory which ended the war and established Rome as the pre-eminent maritime power in the Western Mediterranean. Rome would never be seriously challenged at sea again with Roman influence replacing that of Carthage on the islands of Sicily, Sardinia and Corsica. 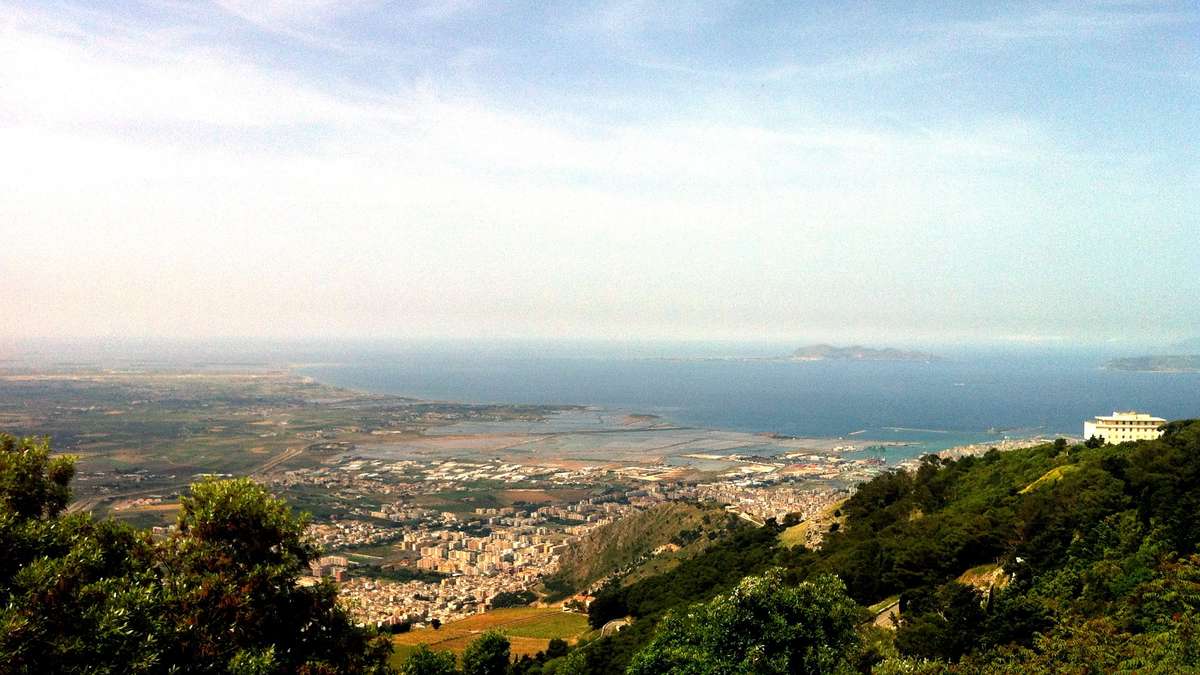 View of the Egadi islands from Erice. Image: Will Mather / ANMM. 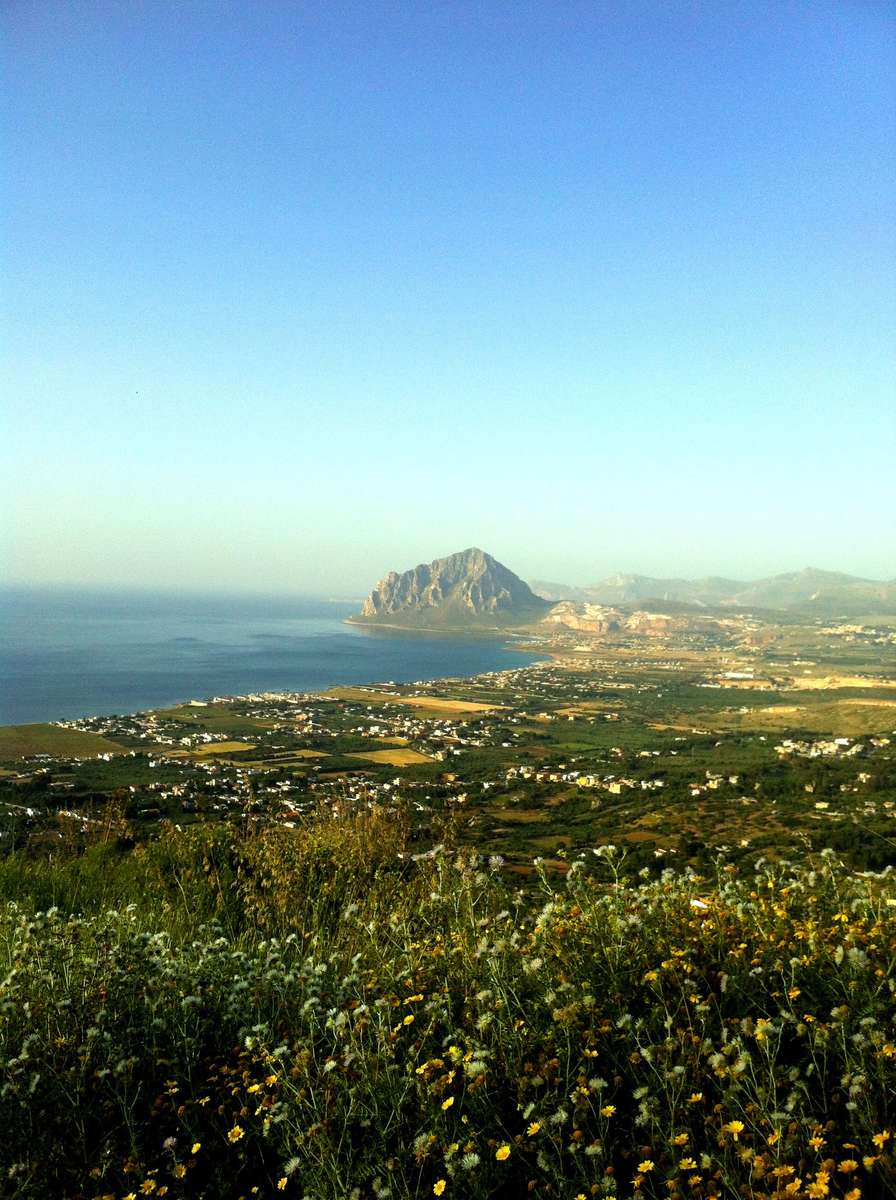 View of the Bonagia Bay from Erice. This is where the Carthaginian navy was heading to. Image: Will Mather / ANMM. 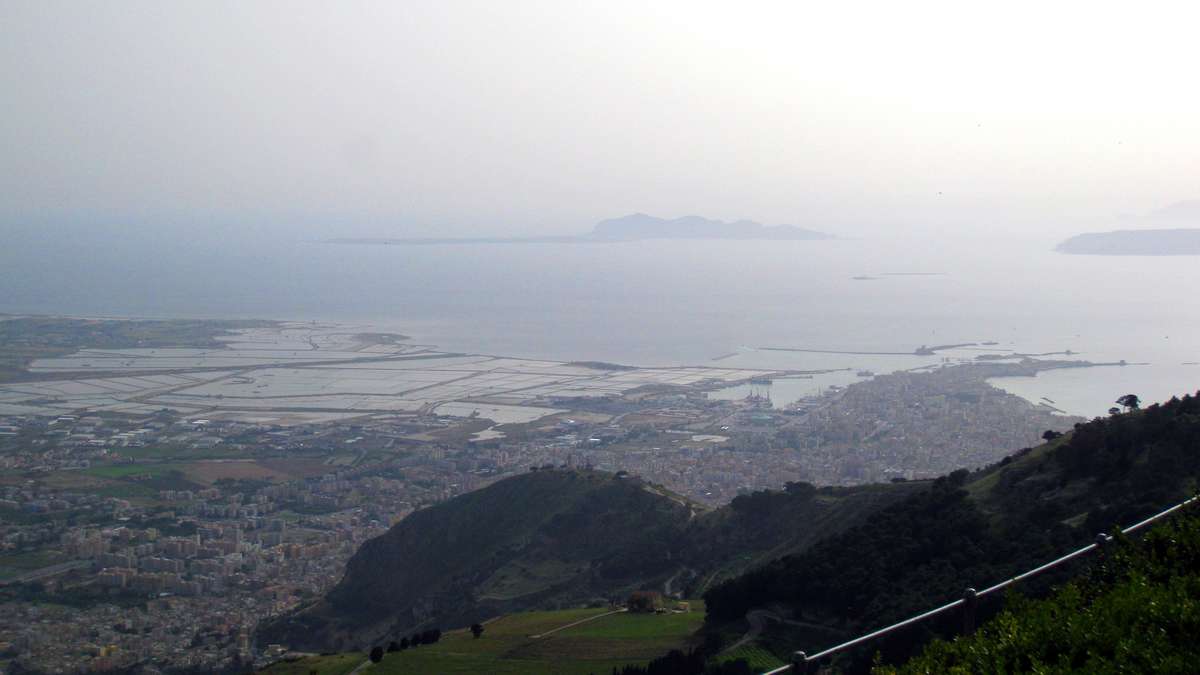 View of the Egadi islands from Erice. Image: Will Mather / ANMM.

So this artefact is remarkable not only for its association with a particular date (highly unusual in archaeology) but also with such a significant event.

Considering the large numbers of rams that were made – Polybius calculates that 700 of Rome’s warships were sunk during the First Punic War alone[2] – they are actually very rare find. Indeed, prior to the discovery of the Egadi rams, only three had been found[3].

This ram was recovered from the seabed by maritime archaeologists in 2011 and named Egadi 4 (it was the fourth ram recovered from the site). Egadi 1, had been seized by police in 2004 from a private collector in Trapani, Sicily. It was claimed that the artefact had been removed from the seabed after getting caught in a fishing dragnet. Archaeologists Sebastiano Tusa and Jeffrey Royal located the battle site and during their surveys, found more rams. As of 2014, eleven have been located – ten of which have been brought to the surface.

Egadi 4, which is on display as part of Escape from Pompeii, was found near rocky outcrop which had protected it from fishing nets. Amphorae dating to the mid 3rd century BC and ballast stones were also discovered at this location. Some of the ballast stones were found inside the rostrum, presumably brought in by the octopuses who nested there once the wood had rotted. Some of the wood, preserved because it was buried quickly, is still inside the rostrum as are the angled spikes that attached the rostrum to the ship’s bow timbers.

The ram is missing the front corner of its upper starboard fin. It was old break when the ship went down. The break was most likely caused by a ram to ram collision during an earlier battle.

The rostrum is made of cast bronze using the lost wax method and was molded directly onto the bow of the finished warship[4]. The decoration and the inscription on the rostrum were part of the cast. The decoration consists of a winged female figure personifying Victory, she holds a victor’s laurel wreath in one hand and a victory palm in the other. 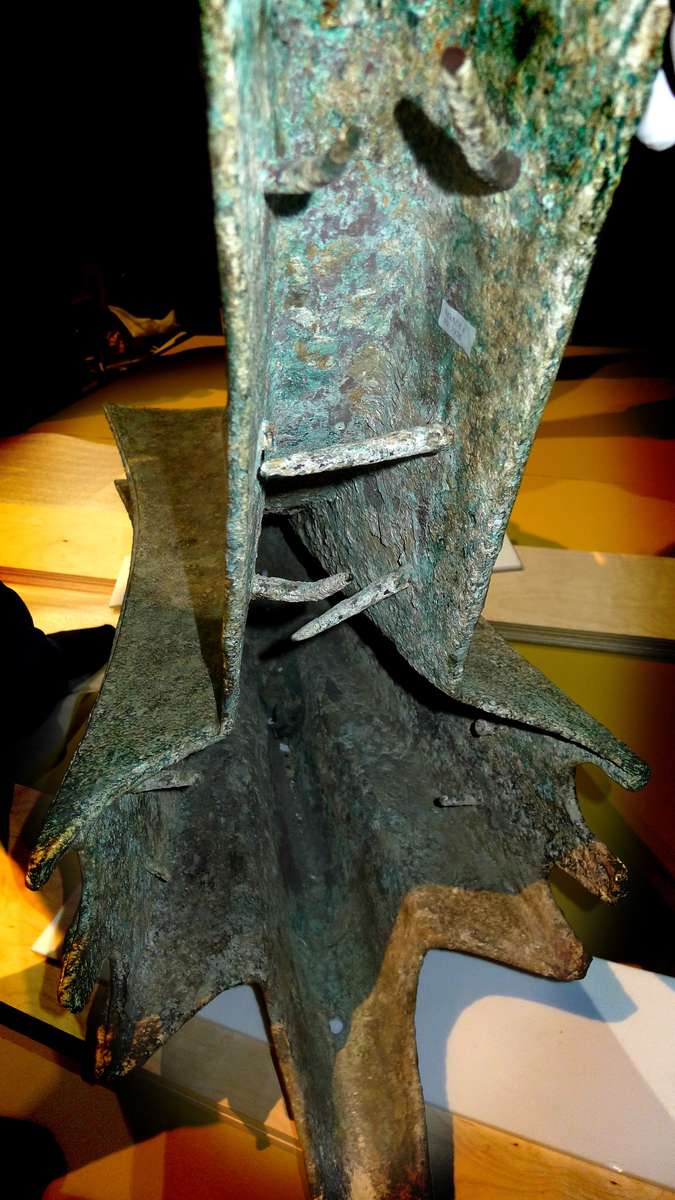 The inside of the rostrum. Image: Will Mather / ANMM. 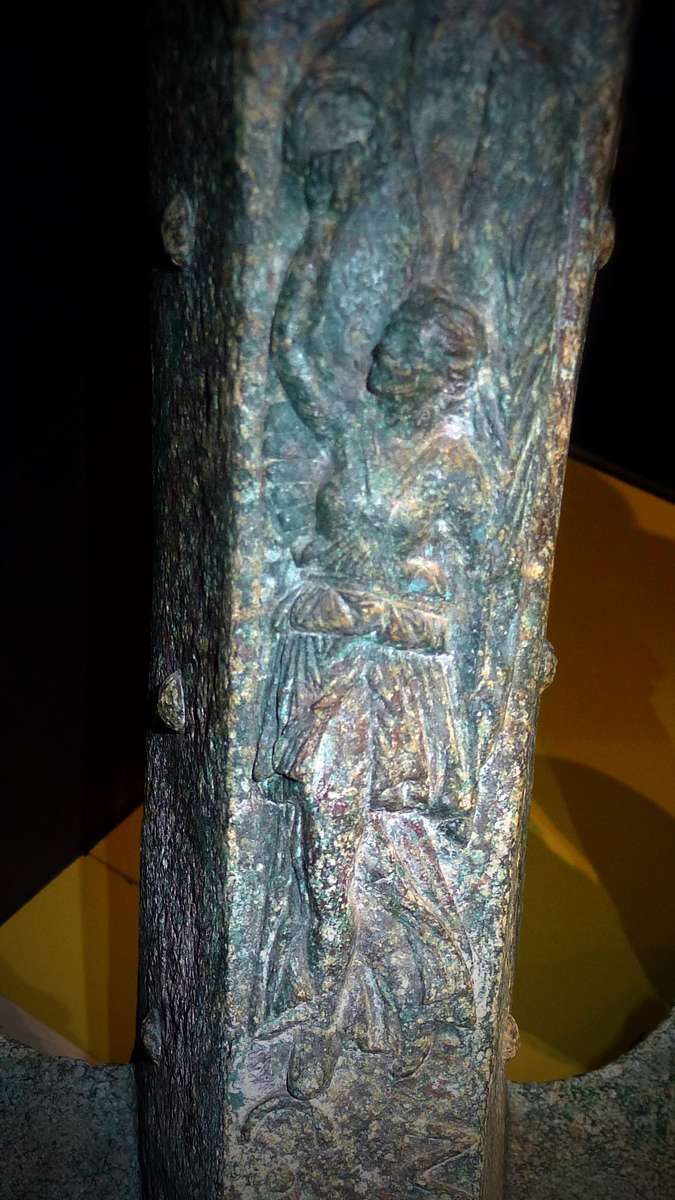 Victoria figure on the rostrum. Image: Will Mather / ANMM.

The inscription on the rostrum. Image: Will Mather / ANMM.

The inscription in archaic Latin script names the two Roman magistrates (called quaestors) who approved the building of the ram: Marcus Publicius, son of Lucius, and Caius Papirius, son of Tiberius. Quaestors had oversight over the Roman Republic’s finances. As well as ordering the production of the ram, the quaestors would have approved the outlay of bronze from the treasury to the contractor and ensure no metal had been embezzled[5].

Roman officials were elected to office, so being well-known to the voters was vital to further your political career. Therefore, publicity may have been the primary reason Publicius and Papirius put their names so prominently on the rostrum[6]. It was especially pertinent as rams were associated with victory and decorated some of Rome’s most prominent victory monuments: The Rostra, a speaker’s platform in the forum, being the most famous.

However, this date does not quite fit as Polybius records that the ships the Romans used in the Battle of the Egadi Islands were new – built with monies raised in a special fundraising effort. But the date may explain an anomaly in the finds from the battle site. Strangely, for a Roman victory, most of them recovered rams are Roman: Of the eleven found, six have inscriptions in Latin and only one of them has an inscription in Punic (the language of the Carthaginians). 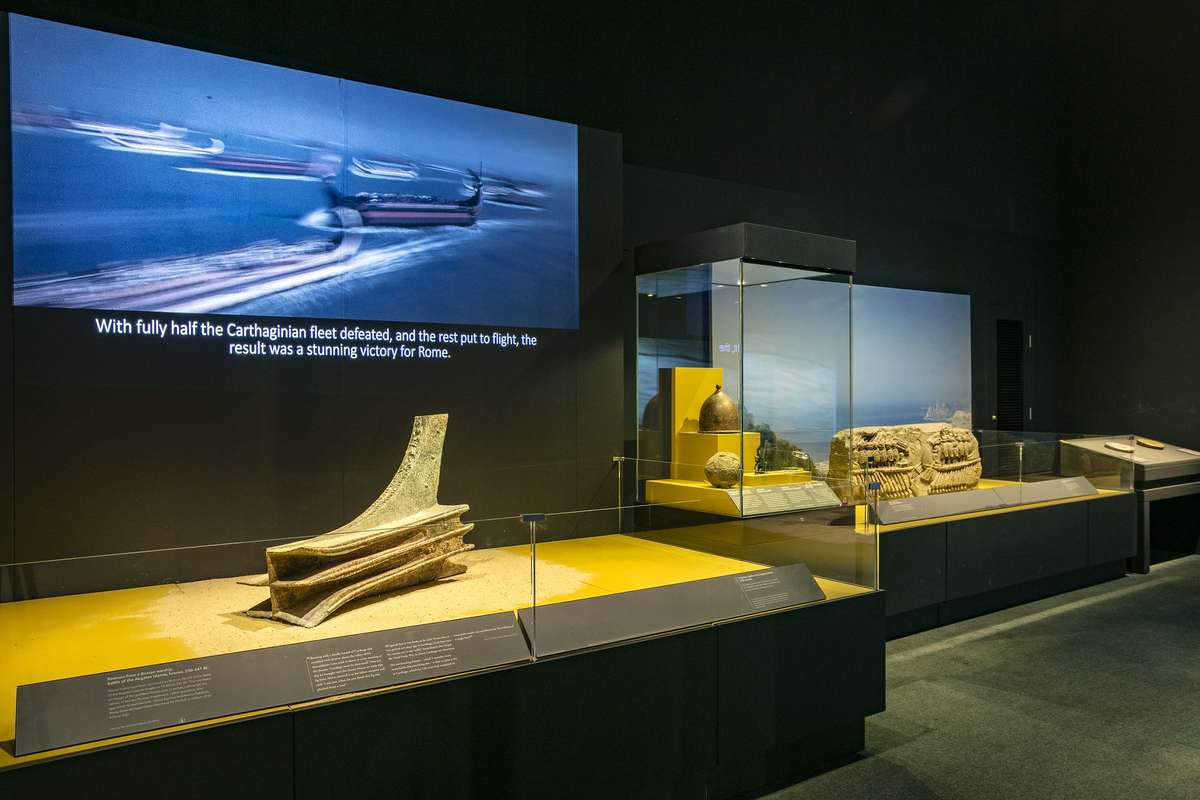 The rostrum in Escape from Pompeii. Image: Andrew Frolows / ANMM. 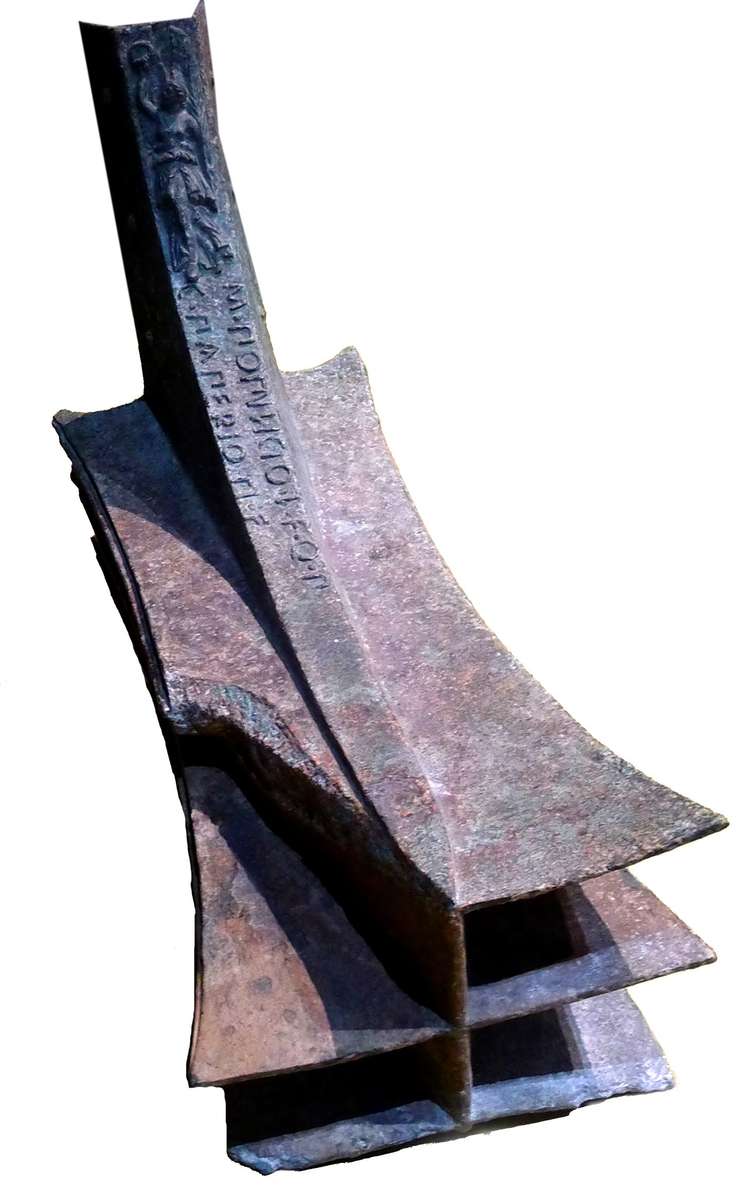 A rostrum that Marcus Publicius approved as quaestor around 250 BC could have used at the Battle of Drepanum in 249 BC, a Carthaginian victory where they seized 93 Roman ships. Our rostrum could be from one of these seized ships used by Carthaginians against the Romans. From Polybius, we know that after the Battle of Drepanum, the Carthaginians had not expected the Romans to ever take them on at sea again and had subsequently neglected their navy[7]. At the Battle of the Egadi Islands in 241 BC, their fleet was hastily fitted out and likely made up of older ships, including ones they had previously captured from the Romans.

The Carthaginians had underestimated their enemies. The Romans had learnt from their previouss defeat: Polybius wrote that the ships that won the Roman victory of  the Battle the Egadi Islands were based on ones captured from the Carthaginians.

Postscript: A twelfth rostrum has been found at the same battle site off the Egadi Islands, maritime archaeologists hope to raise it later this year. Further exploration may find more increasing our knowledge of ancient naval warfare.

View all posts by Will Mather→
Posted in: Exhibitions , Maritime Archaeology
↑