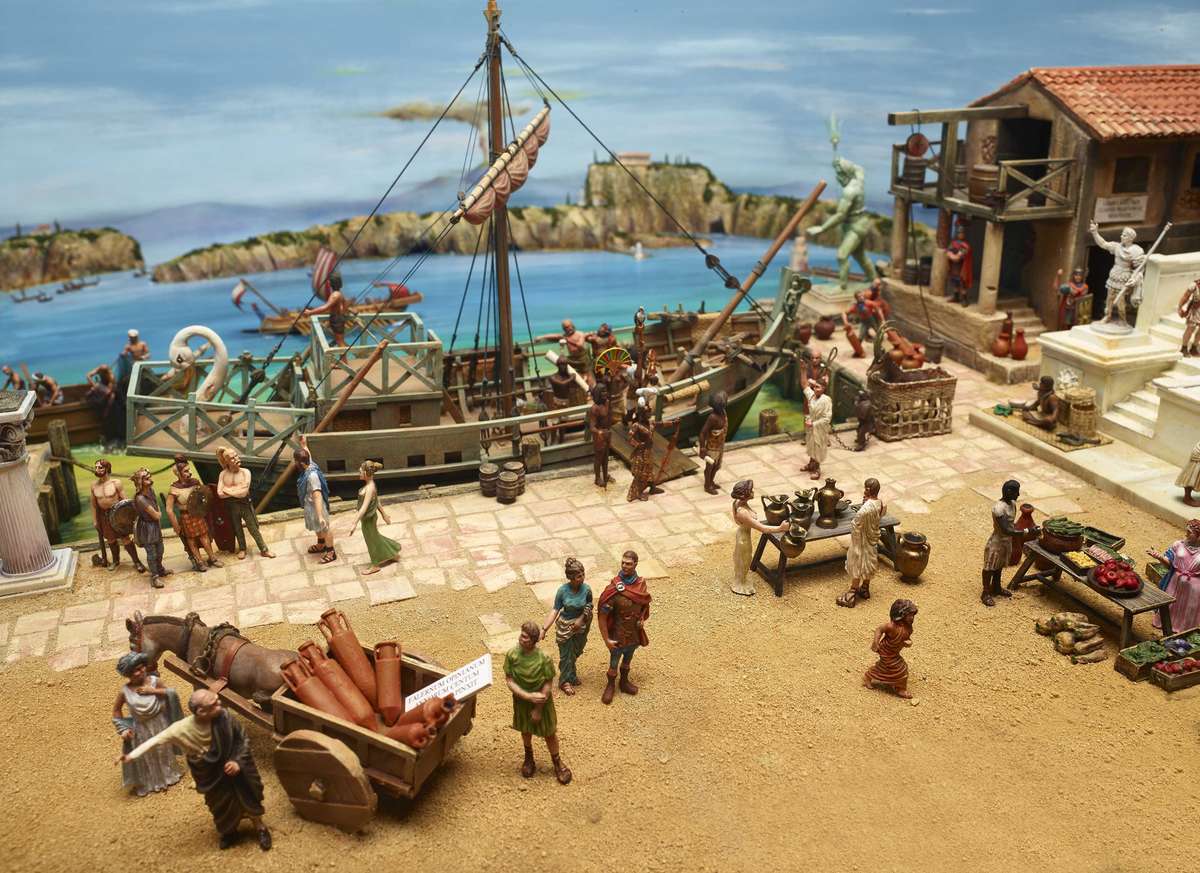 Misenum in miniature. An up close look at the diorama created by Geoff Barnes and Roger Scott for Escape from Pompeii. Image: Andrew Frolows / ANMM.

In 79 AD Mount Vesuvius erupted, sealing nearby Pompeii and Herculaneum into time capsules that would not be reopened for many centuries, and which have been incredibly rich historical and romantic resources for today’s world.

The eruption was clearly visible from the Roman navy’s major port-city of Misenum, along the coast at the northern end of the Gulf of Naples. In response, the admiral of the fleet, Pliny the Elder, ordered his ships to go to the rescue. It is one of the first recorded attempted rescues of civilians by sea by a military force.

The Escape from Pompeii opens at the museum on 31 March. The exhibition reveals how the Roman navy came to dominate the Mediterranean, and how the Roman empire’s sea trade made it so spectacularly successful for centuries.

Pliny the Elder was a keen observer of natural phenomena and prolific author about them, as well as the civilian bureaucrat in charge of the navy. He was intrigued by the towering ash cloud rising up from the volcano. He decided to summon his swift Liburnian bireme, and go to look for himself. However, most of the people in Misenum were getting on with their daily lives. For them, volcanic activity at Vesuvius was a regular event, and not particularly notable. 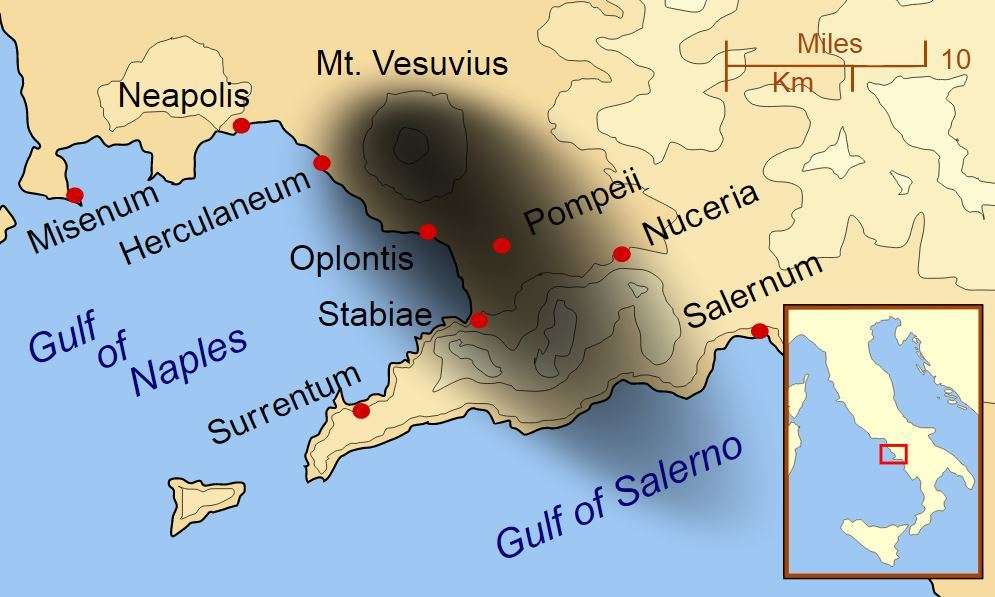 The cloud in the map above represents the distribution of ash and cinders from the eruption of Mount Vesuvius in 79 AD. Image: MapMaster, via Wikipedia.

So, what would be our moment in time for the Misenum diorama? Just prior to the major eruption, I decided. This is our moment. We know, but they don’t, how catastrophic this event will be for Pompeii and Herculaneum.The diorama is set in a busy marketplace which incorporates a lot of observable incidents about Roman life in Pliny’s time.

August 24th, in the afternoon – a moment in time as Pliny the Elder consults his maps (right). His widowed sister Plinia has drawn his attention to the curious volcanic cloud that has formed over Vesuvius. Admiral and bureaucrat by profession and keen amateur naturalist by inclination, he is intrigued and has ordered up his speedy bireme to take him to see the volcano first-hand. 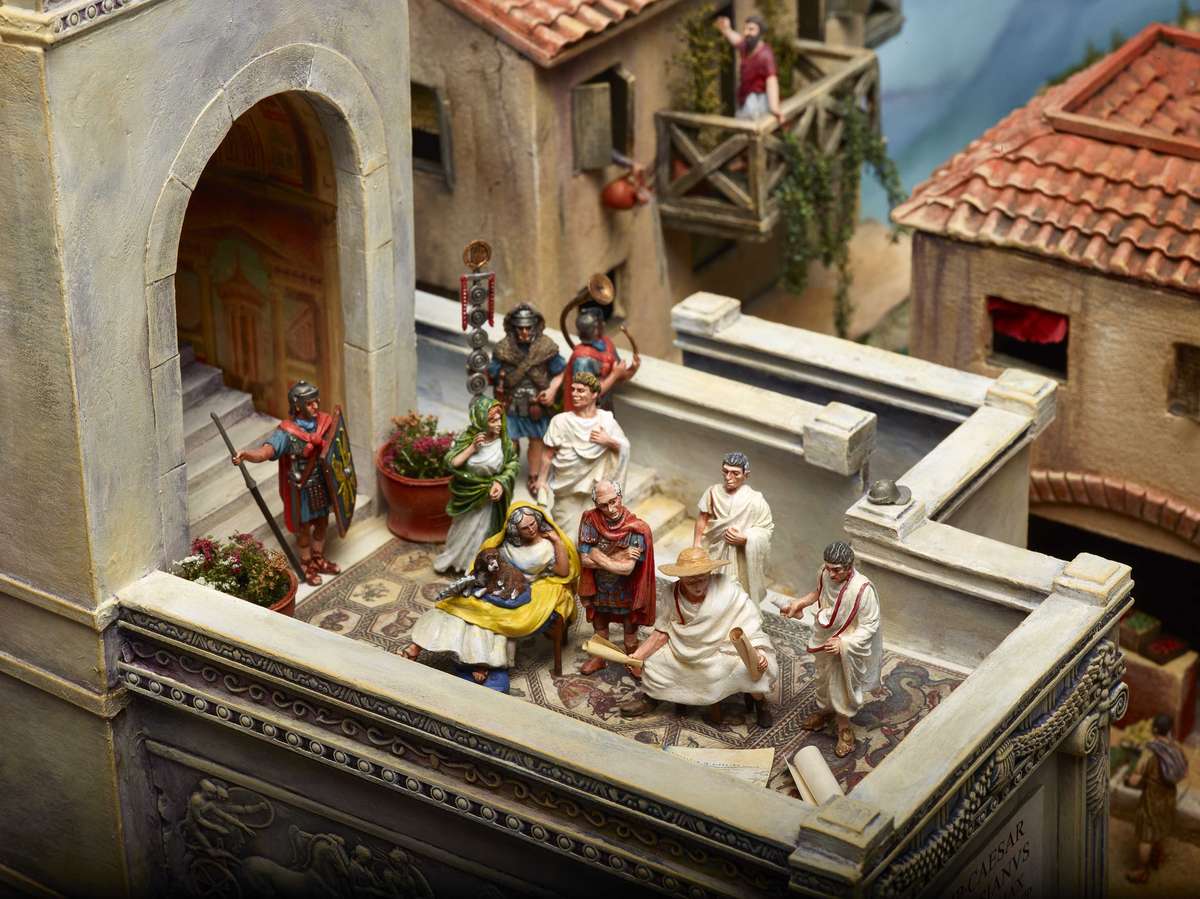 Pliny the Elder plans to set out for Pompeii. Image: Andrew Frolows / ANMM.

As yet, he has not received the urgent pleas for help from doomed Pompeii. Behind him, Pliny the Younger, adopted nephew whose letters will subsequently tell us about these momentous days, flirts with his mother’s maid and decides not to accompany his uncle.

Meanwhile, down in the square, life in Misenum goes on with little attention being paid to smoking Vesuvius further down the Campania coastline. An angry Trimulcio, ex-slave, now prosperous entrepreneur not noted for his modesty nor honesty, abetted by his small but fierce wife Fortunata, berates his hapless slave for being careless with a cart full of Trimulcio’s suspect ‘vintage’ wine (left). 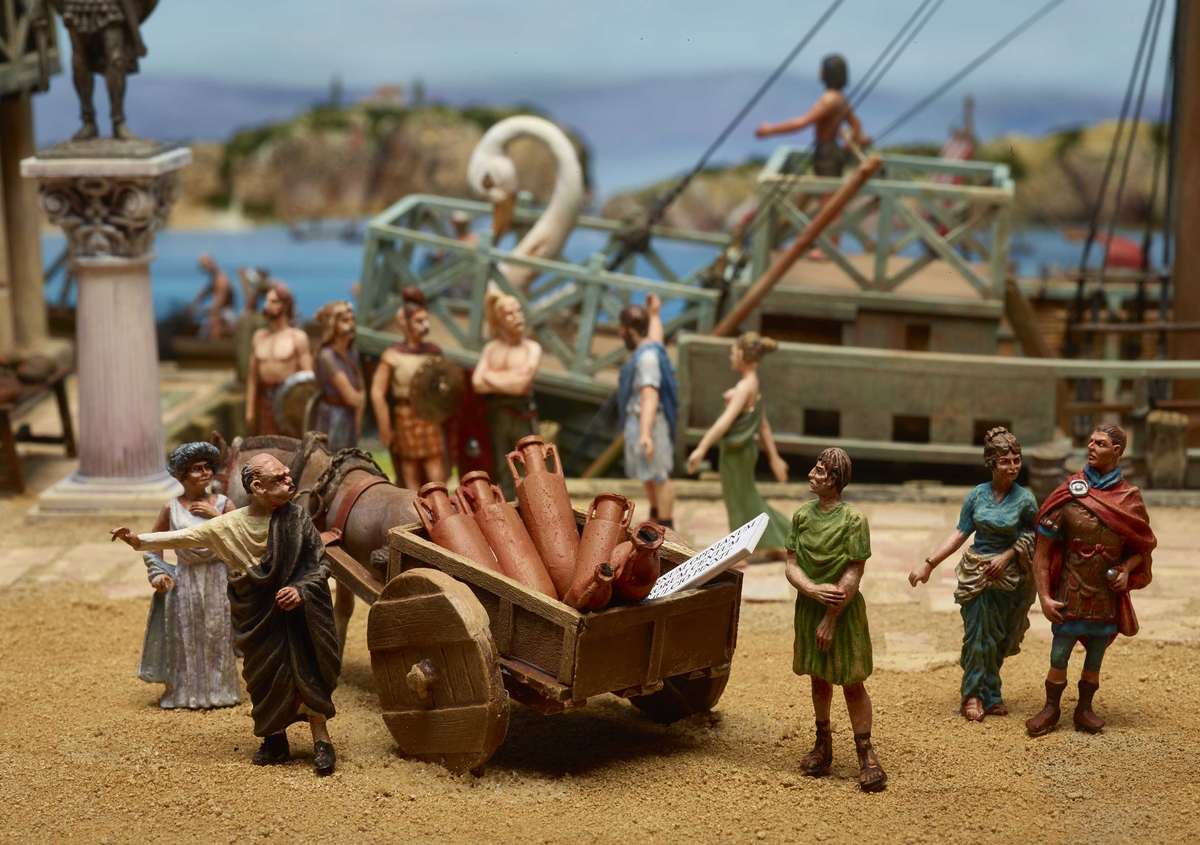 A merchant ship has just unloaded passengers and cargo from North Africa. The Nubian princess (at the foot of the gangplank, below) expected this mighty Roman city to be more spectacular and less squalid. She is accompanied by a crafty Egyptian lawyer who is translating and assisting. 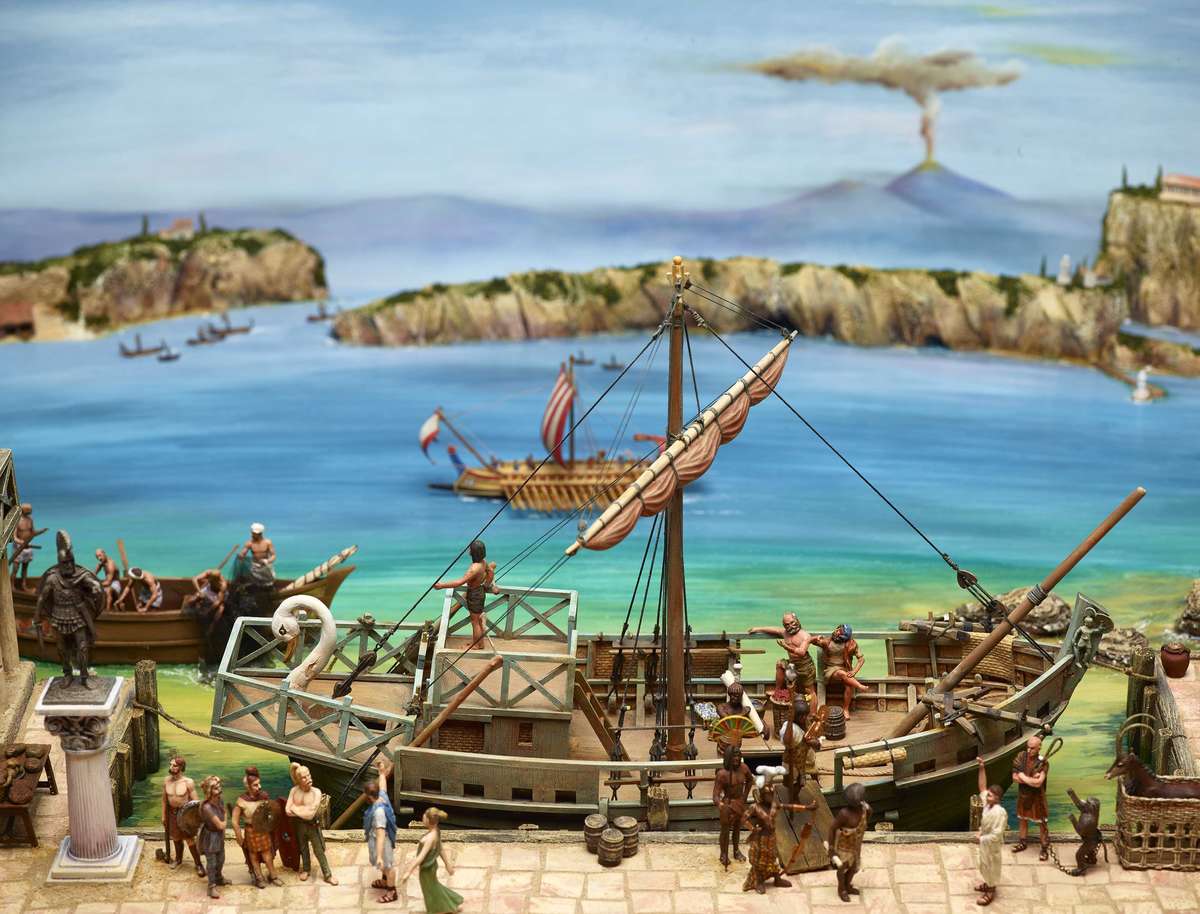 The Roman Empire is a multicultural mix, and exotic visitors are frequently seen at the dockside. Image: Andrew Frolows / ANMM.

Nobody else takes much notice. The Roman Empire is a multicultural mix, and exotic visitors are frequently seen at the dockside.

Some marines are storing amphorae and barrels in a navy warehouse. Amphorae had been the standard way of transporting valuable liquids since the Bronze Age but, while reliable, they were ceramic and heavy. The Roman army has noted that the Gauls used wooden barrels for beer, and has quickly adopted the idea. Behind the naval warehouse, a large statue of Poseidon calms the seas. 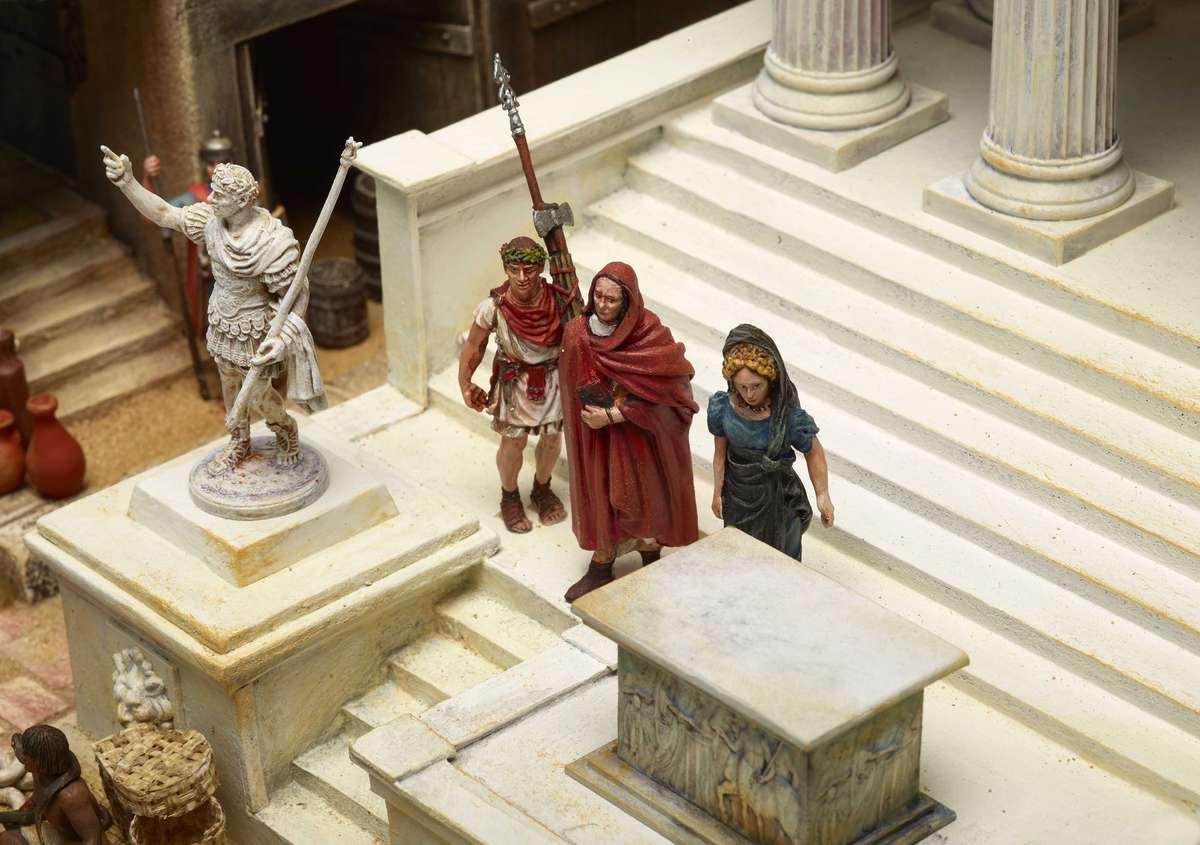 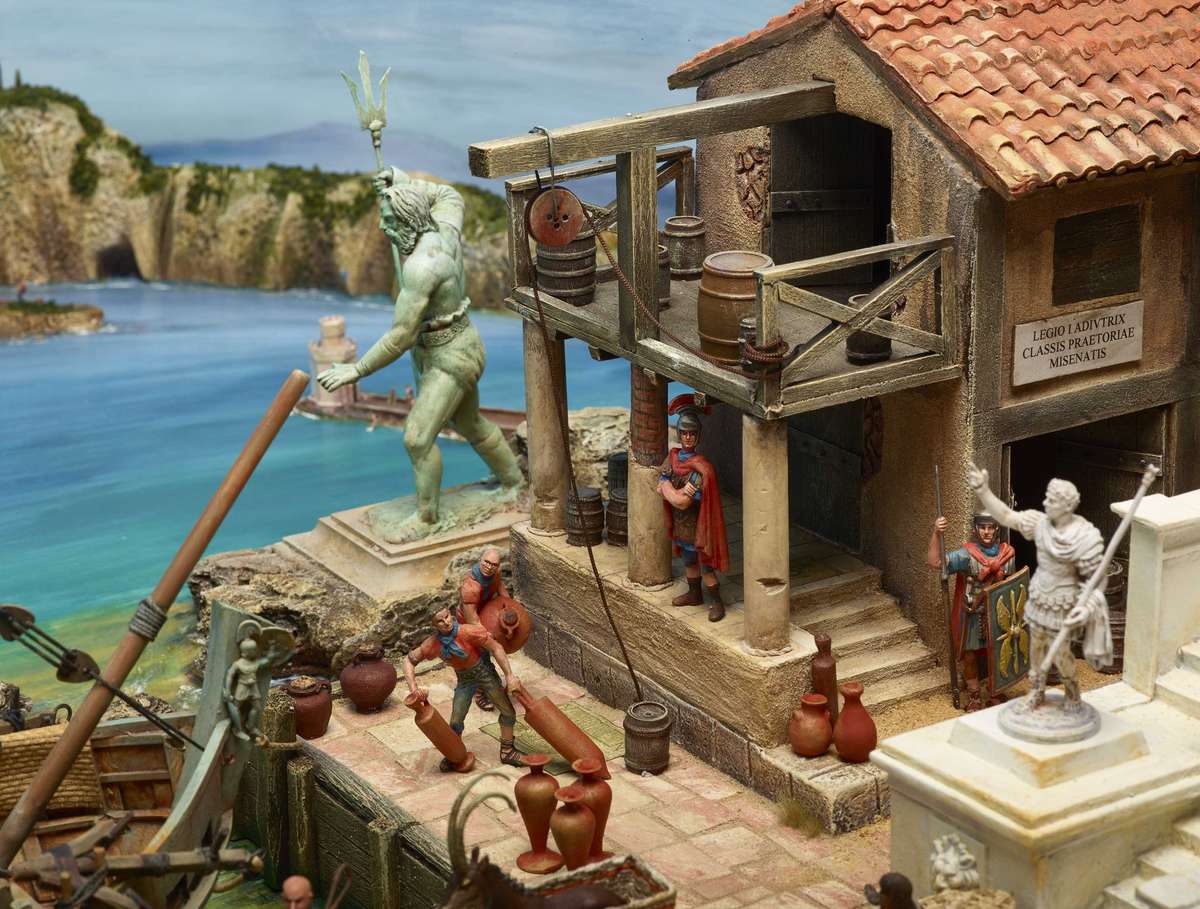 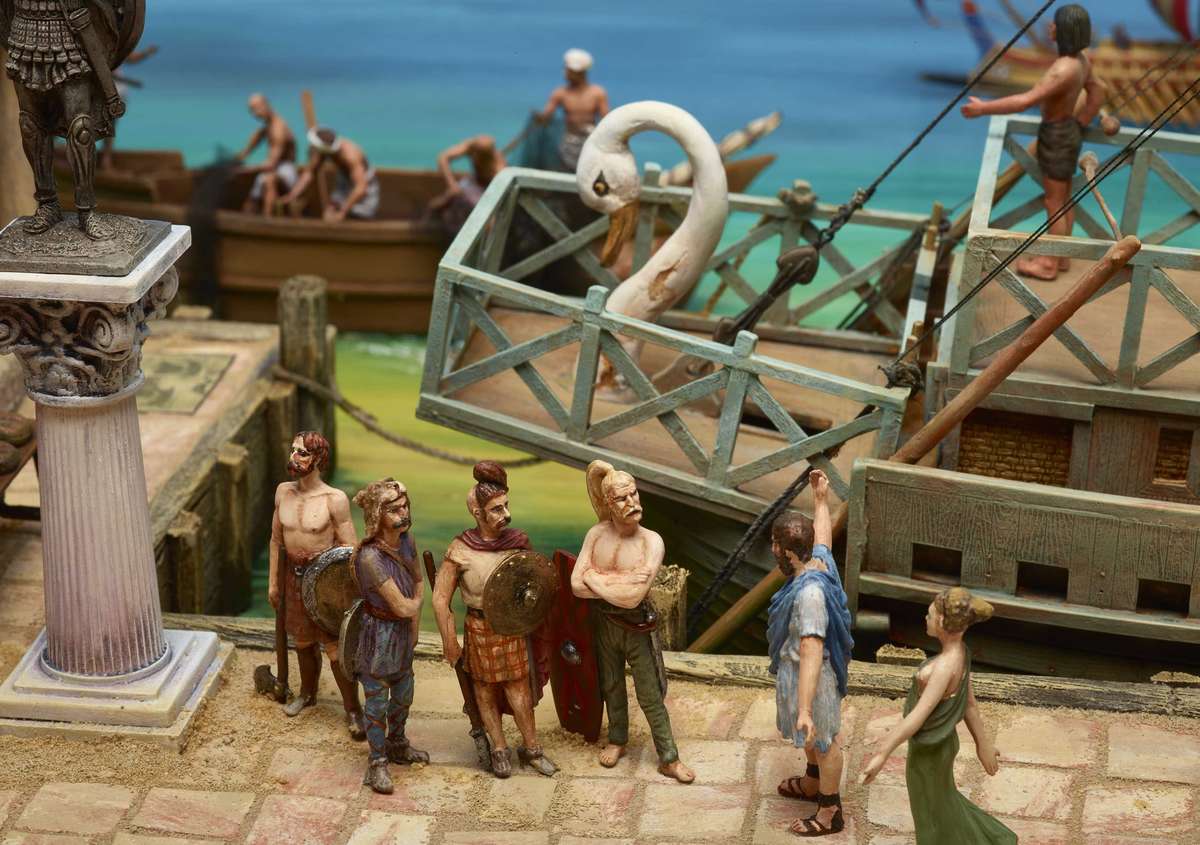 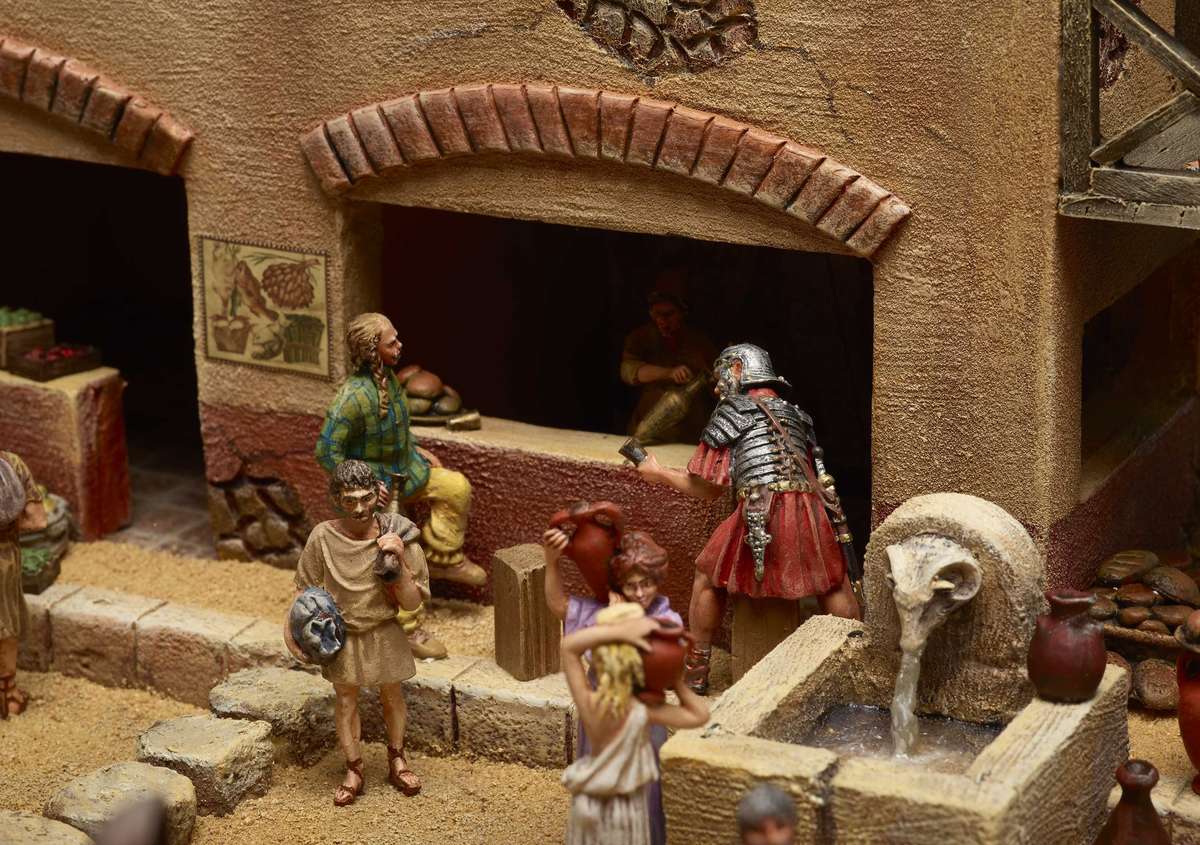 The diorama-making project began with an email in September 2016. It was headed ‘Escape from Pompeii’ and I assumed it was another all-volunteers info-marketing blurb. Fortunately, I read it rather than deleting it. It was from Michelle Linder, the Temporary and Touring Exhibitions Coordinator. Would I be interested in making a diorama to include in the show?

I was pleased but surprised. In the brave new world of museum exhibitions, dioramas are seen as wonderfully old-school. Here’s Dr Stephen Gapps’ blog about another diorama that I had made for the museum (the Suvla Bay Bridging Train):

One of the most popular parts of the War at Sea – The Navy in WWI exhibition at the museum is a wonderfully old-school diorama. It has no bells or whistles. You can’t swipe, touch or play with it – apart from a series of buttons that light up various sections. But everyone – even the “walk through” visitor – stops and checks it out.

In fact, dioramas have always been interactive, requiring the visitor to project themselves into the moment in time in miniature. Despite current techno-fever in museum display, they still prove to be engaging. The Suvla Bay diorama has now been touring Australia for two years, and always there is evidence of nose smudges to be cleaned off the glass at the end of the day.

There are a multiplicity of skills required in diorama building – accurate research, informed speculation, carpentry, sculpting in various modelling compounds, architectural modelling in card, landscaping in plaster, perspective (forced and/or receding), painting in acrylics, watercolour and pastels, utilising anything that can reduce the amount of scratch-building, and an intimate knowledge of what is on the shelves of art and craft shops. For the Misenum diorama we would need buildings, ships and at least 50 figurines to bring the ancient port to life. 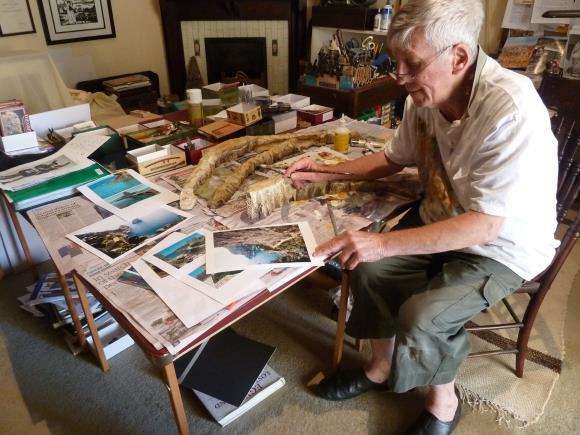 A lot of research went into designing the diorama. Here Geoff paints the rocky cliffs of the bay of Naples from photo references. Image: Roger Scott.

It was to be a diorama in a box, with receding perspective, viewed from the front. Therefore you don’t model or paint anything that can’t be seen from this angle. It is very different from the precision work of ship modellers. It is creating an impression and using the tricks of light and shade, painted and illuminated, and limiting of visual access in much the same way as a proscenium arch limits what you can see on a stage, to create an emotional reaction as well as an intellectual response.

I did a lot of internet and library research and sketched out a floor plan. I proposed that the diorama be in a diminishing perspective: a foreground dockside area in 1/35 scale, a Liburnian galley in 1/72 scale, and a distant shoreline in 1/1200 scale. The exhibition team approved, and work started in fellow volunteer Roger Scott’s underground ‘dungeon’ space, and my second bedroom, now dedicated to diorama building.

We blocked out the buildings in cardboard. Johanna Nettleton, the exhibition’s 3D designer, explained that the diorama had to be viewed by young children and people in wheelchairs, as well as by two-metre-tall adults. We set up a table at minimum viewing height, but constantly checked sightlines at varying heights. 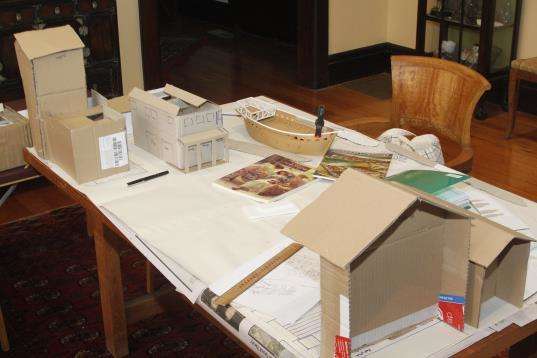 Maping out the town of Misenum, in miniature. Image: Geoff Barnes.

My lifetime of interest in the world of miniatures has been useful in knowing where to access figures, but this time we had to find Roman naval and civilian figures. Which was not so easy. There are excellent high-quality Roman figures made nowadays by a couple of companies, but at over $100 per figure, we needed a less expensive route. John Eden, a UK model-maker, had acquired moulds of a range of 54mm ancients designed by Russell Gammage back in the 1960s. John was also offering his own Roman market scenes. Excellent, except that Australian Customs hit us hard for bringing in a ‘commercial quantity’.

Some other figures were sourced from E&K Castings in Russia. The ships were plastic kits from Zvezda, a Russian model kit company, and Aoshima, in Japan. No trade ship was available, so I spent considerable time building one. The 1/1200 scale ships and buildings, sculpted by Rod Langton, a war-gamer from Cornwall, UK, were a challenge to paint. 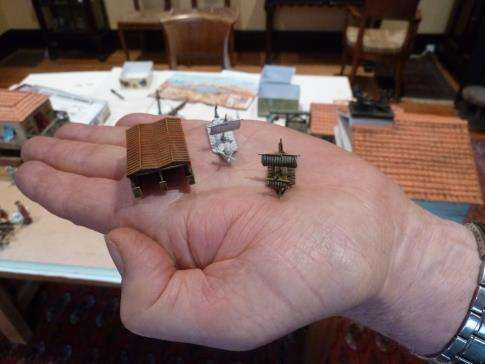 A variety of scales were used in the figurines and props to create the forced perspective. Image: Geoff Barnes.

We had to create the buildings, dockside and distant shoreline from foam core board, cardboard from the reject bins of a picture-framing company, from a supplier of insulating foam, and multiple trips to Bunning’s, Eckersley’s and Lincraft. 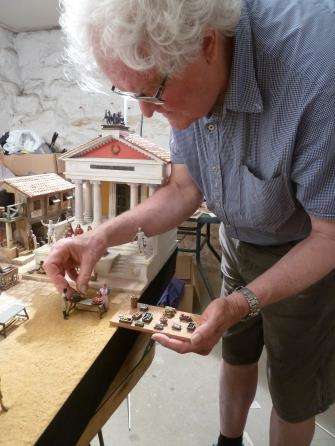 We pushed ahead with further assistance from another modeller and skilful painter, Bob Metcalfe. The diorama was eventually delivered to the museum, where I did the final clean-up and adjustments early January. However, the key element was still missing – the towering cloud of Vesuvius in the distance. This was achieved by way of the largest painting that I’d ever undertaken; the backcloth, two and a half metres of Naples Bay with a spouting Vesuvius. The first attempt looked a bit like a mural on the wall of a pizza shop, but it was subsequently toned down, and Roger and I trust that it is in style and keeping with four months of dedicated work. 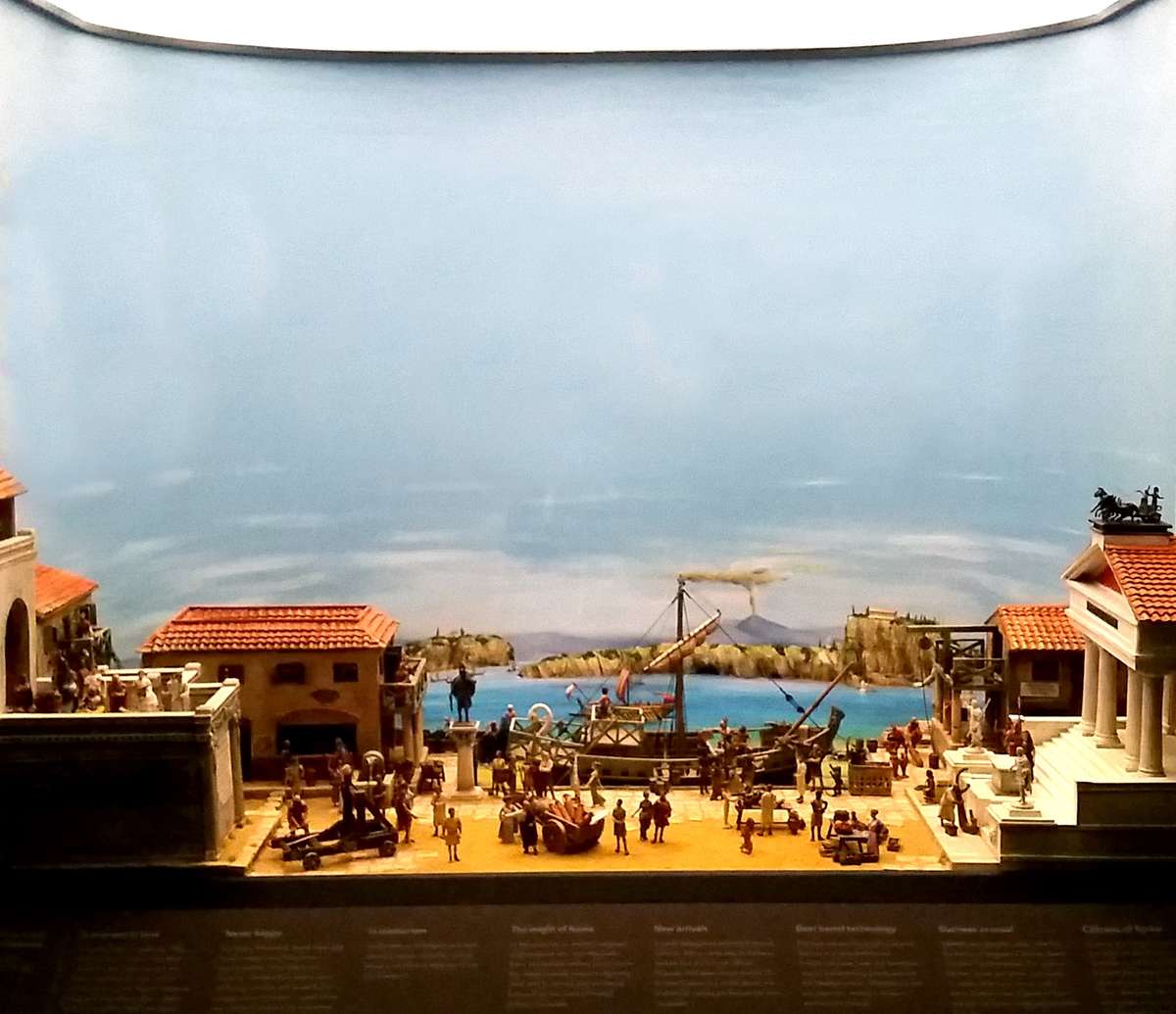 Then, into the display case, and Mission Misenum accomplished!

View all posts by Guest→
Posted in: Exhibitions , Arts and Culture
↑