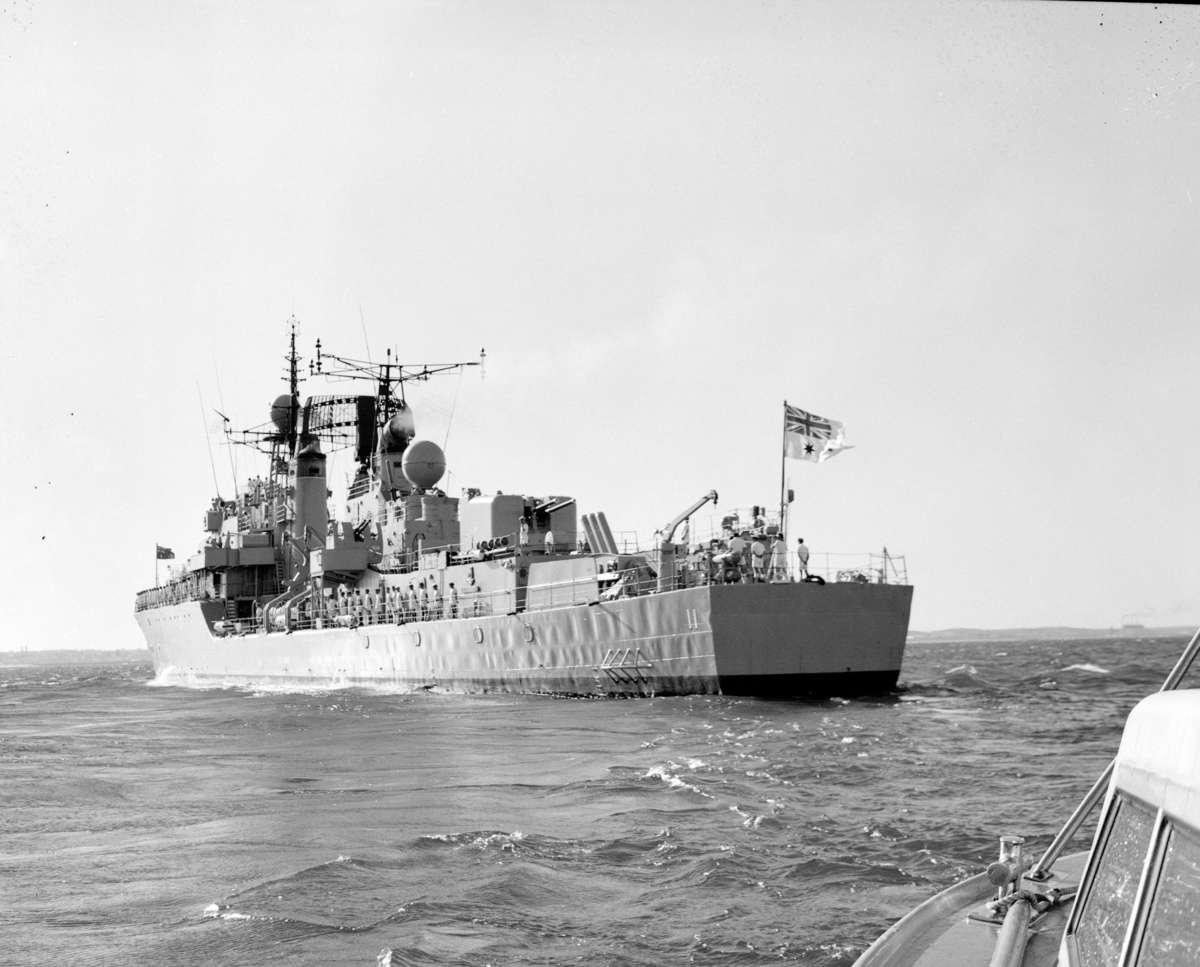 Flags are everywhere. We see them flying from government and corporate buildings, from ships and cars, at sporting events, and during festivals. They all mean something whether it be identifying a country or business, or marking the end of a marathon. This month marked the anniversary of one of Australia’s most significant flags – the Australian White Ensign (AWE), first flown on 1 March 1967.

With the coming of Federation in 1901, the existing naval forces of the various Australian states became one Commonwealth Naval Force until 1911, when King George V conferred the title of Royal Australian Navy (RAN) upon our fleet of warships and shore based establishments. You might think that there was an opportunity then to further identify the Australian ships with an Australian ensign but it didn’t happen. The Commonwealth countries discussed at the 1909 Imperial Conference what their navies should fly as their ensign – the national flag flown by a vessel to show its nationality – with both Australia and Canada advocating change.

But no decision was made and the fleets of the Commonwealth continued to fly the British White Ensign (BWE) at the stern and their national flag at the bow. For a number of years, discussions and requests for change continued, however, the British Admiralty resolved that all Commonwealth navies would fly the BWE. So the RAN flew the BWE – a red St George’s Cross on a white field with the Union Flag in the upper left corner. RAN ships continued to often be mistaken as ships of the British Royal Navy (RN).

With Australia’s entry into the Vietnam War in 1962, discussion once more turned to the RAN having its own white ensign rather than flying the BWE – which was argued as flying the ensign of another country. During WW2, the RAN was under the command of the RN but from the 1950s had increasingly sought independence from the RN and was allying itself more closely with the USA.

Such a seemingly simple task as changing a flag took a year of discussion until all parties agreed and Her Majesty Queen Elizabeth II granted royal assent on 7 November 1966. The introduction of the new Australian White Ensign was slated for 1 March 1967 when all ships and shore establishments of the RAN – no matter where they were in the world – would lower the BWE and raise the AWE.

What does the AWE look like? Quite simply it’s a white version of the blue Australian national flag. It has a white background, the Union Jack in the upper left corner, the Federation Star beneath that, and the five stars of the Southern Cross to the right. 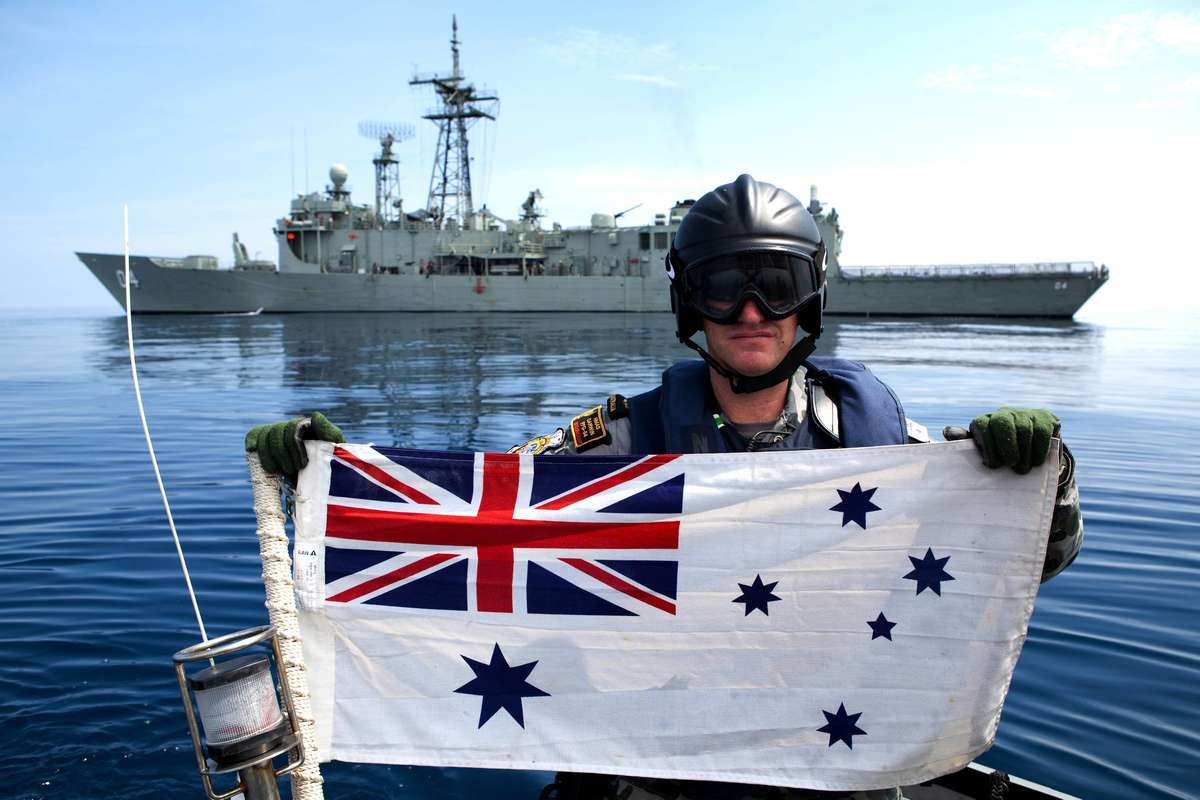 Who flew the AWE first? That honour went to the Australian National Line’s cargo vessel MV Boonaroo. But that’s not a naval ship, I hear you say. During the Vietnam War the Boonaroo was chartered to transport supplies to our troops in Vietnam. In 1967 the Seaman’s Union refused to sail the cargo ship as it had ordnance for the RAAF aboard and so, in order to continue the sailing schedule, the Boonaroo was commissioned into the RAN, a naval complement was put aboard and she sailed with her cargo. This all occurred on 1 March 1967 and the newly-commissioned HMAS Boonaroo was the first RAN vessel to fly the AWE. The ship was in the right place, at the right time. 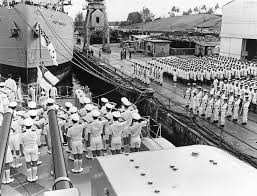 And which ship has flown the AWE the longest period of time? That honour almost certainly goes to our own HMAS Vampire. The destroyer flew the AWE from 1 March 1967 until her final decommissioning from the RAN on 13 August 1986; and when the Vampire was transferred outright to the museum on 9 April 1997, the RAN granted special permission for Vampire to fly the Australian White Ensign, despite not being a commissioned warship. That’s 39 years of proudly flying the AWE – symbolising the loyalty, courage, service and mateship of those who serve and have served in the Royal Australian Navy.

There’s one more important connection that Vampire has with the AWE. The original design was submitted by Commander GJH Woolrych who, in 1971 became commanding officer of HMAS Vampire.

View all posts by Lindsey Shaw→
Posted in: Navy and defence
↑