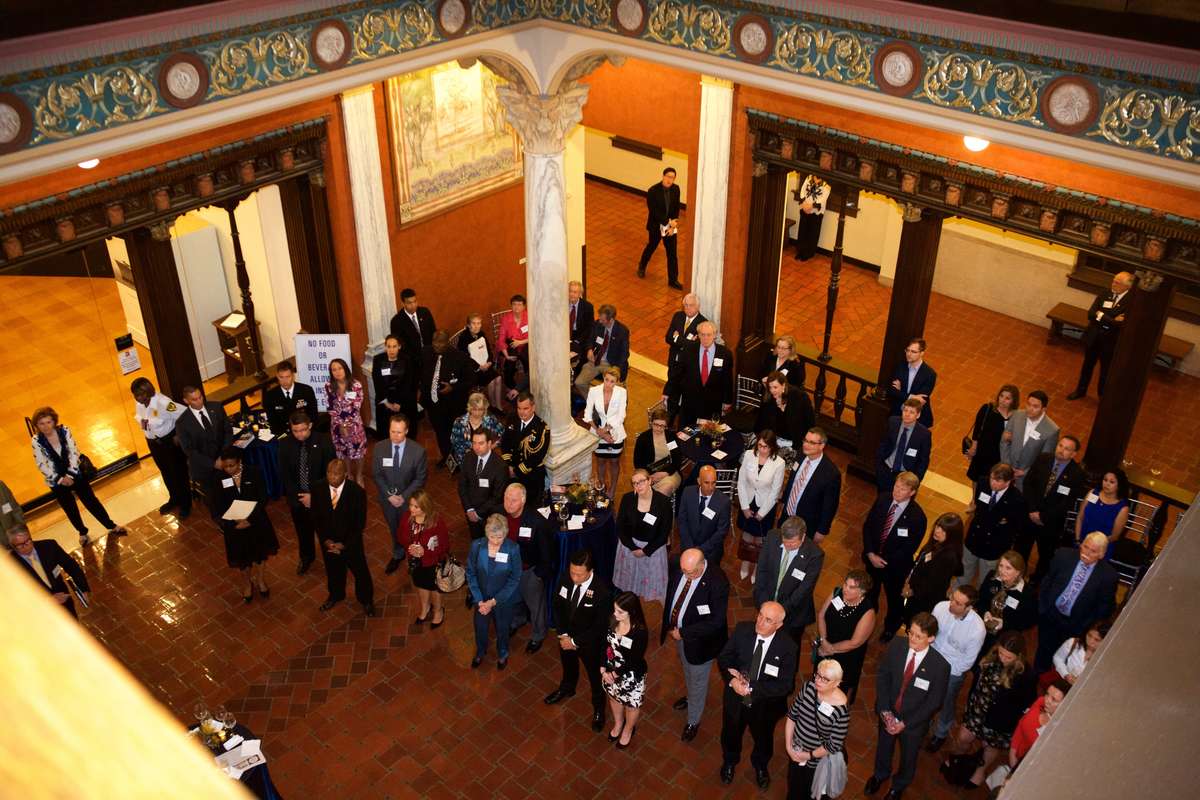 Speeches at the opening reception for Guardians of Sunda Strait. Image: Ashley Patranella.

It’s been a busy few days here in Houston with museum’s Guardians of Sunda Strait exhibition. All the objects and their labels have been successfully and safely installed in their showcases or on display panels and all the graphics have been applied to the walls. The final graphic caused a few headaches though! Firstly, the paper didn’t arrive at the factory, then the wrong graphic was accidentally printed, then the colours were wrong. But we have it now and it looks great. Exhibition installation always has a contingency of a few days built in just for this kind of last minute problem!

Australian National Maritime Museum Director Kevin Sumption had arrived and we visited the mighty battleship USS Texas. The ship is a member of the Historic Naval Ships Association – as is our museum – so it was valuable for Kevin to meet Ship Manager Andy Smith and talk about maintenance and future planning requirements for our ships. The Texas is the first of many HNSA ships to display our pop up banner display on the Guardians of Sunda Strait. 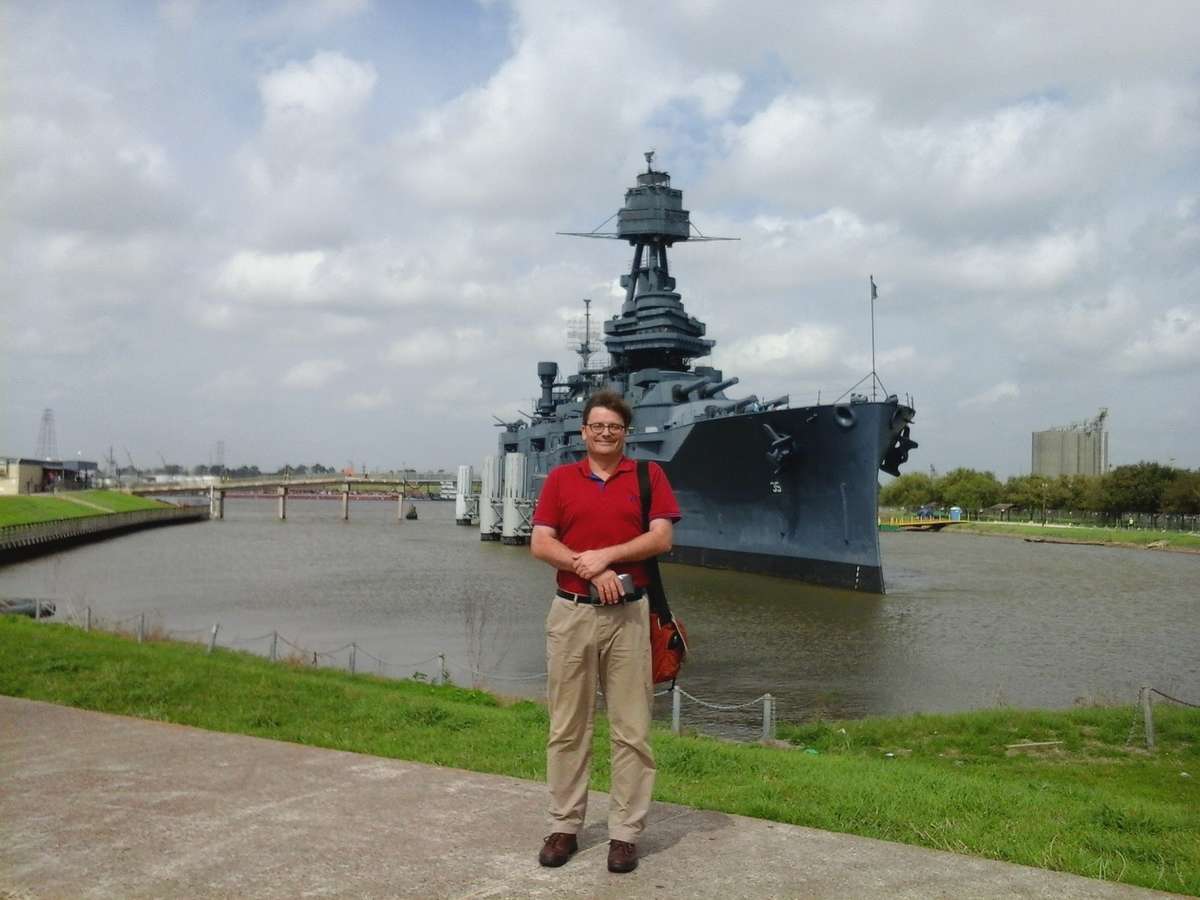 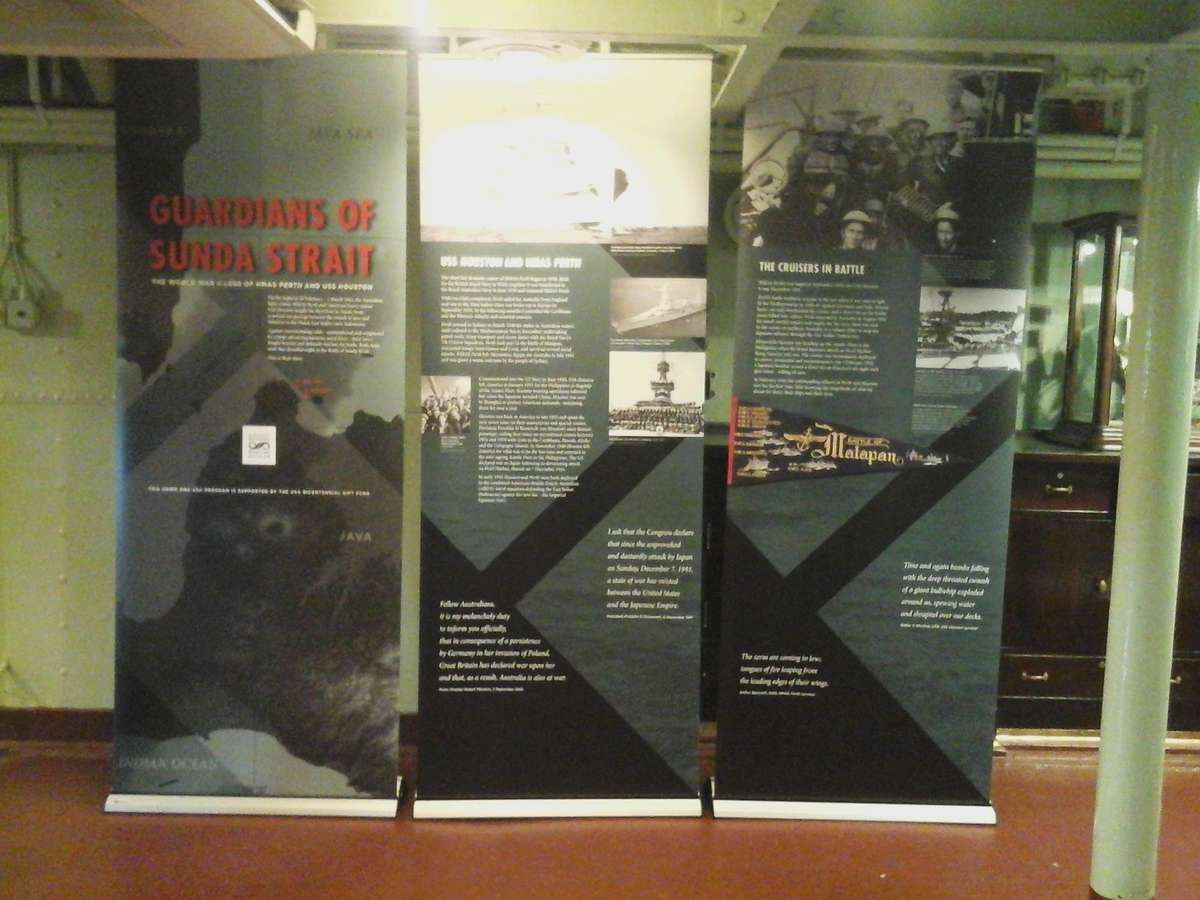 USS Texas is the first of many HNSA ships to display our pop up banner display on the Guardians of Sunda Strait. Image: Lindsey Shaw / ANMM.

The Archaeological Institute of America (Houston Society) has scheduled a number of events that tie in nicely with the exhibition. In conjunction with the Houston Museum of Natural Science there was a screening of the classic film Bridge on the River Kwai. It was shown on a huge screen and I had forgotten just how good it was. We had a discussion beforehand around the fact that it was a Hollywood movie and not a true representation of the experiences of prisoners of war. Nonetheless, it gave some insight into the conditions the men of HMAS Perth and USS Houston had to endure.

We had a terrific opening at the Julia Ideson Building, made even more special as our guests of honour included a widow and three children of USS Houston survivors. Like HMAS Perth, there are only a handful of survivors of USS Houston, and their age now generally precludes them from much travelling. The opening was sponsored by Schlumberger – an international provider of technology to the oil and gas industry – and The Hon Alastair Walton, Consul General and Senior Trade Commissioner of Australia has been a great supporter of the exhibition. Our own Director, Kevin Sumption, spoke at the opening, putting the exhibition and its development into the context of American and Australian shared histories and continuing friendship. 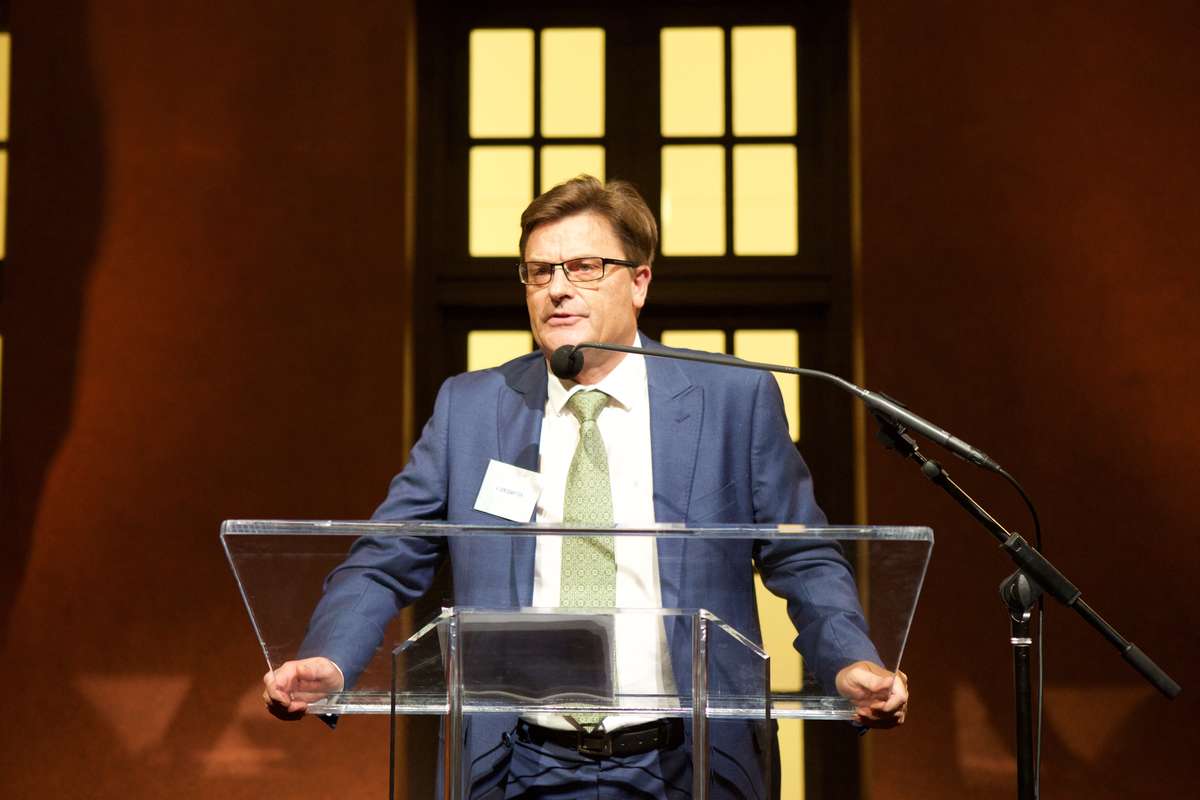 Kevin Sumption, spoke at the opening, emphasising the shared histories and continuing friendship between America and Australia. Image: Ashley Patranella.

Of special note was the performance of the Houston Grand Opera Company who had created a song titled Overboard as part of its Veterans Songbook series. It’s the story of the Battle of Sunda Strait and premiered at the opening reception. Talented vocalists made this libretto a significant part of the evening. 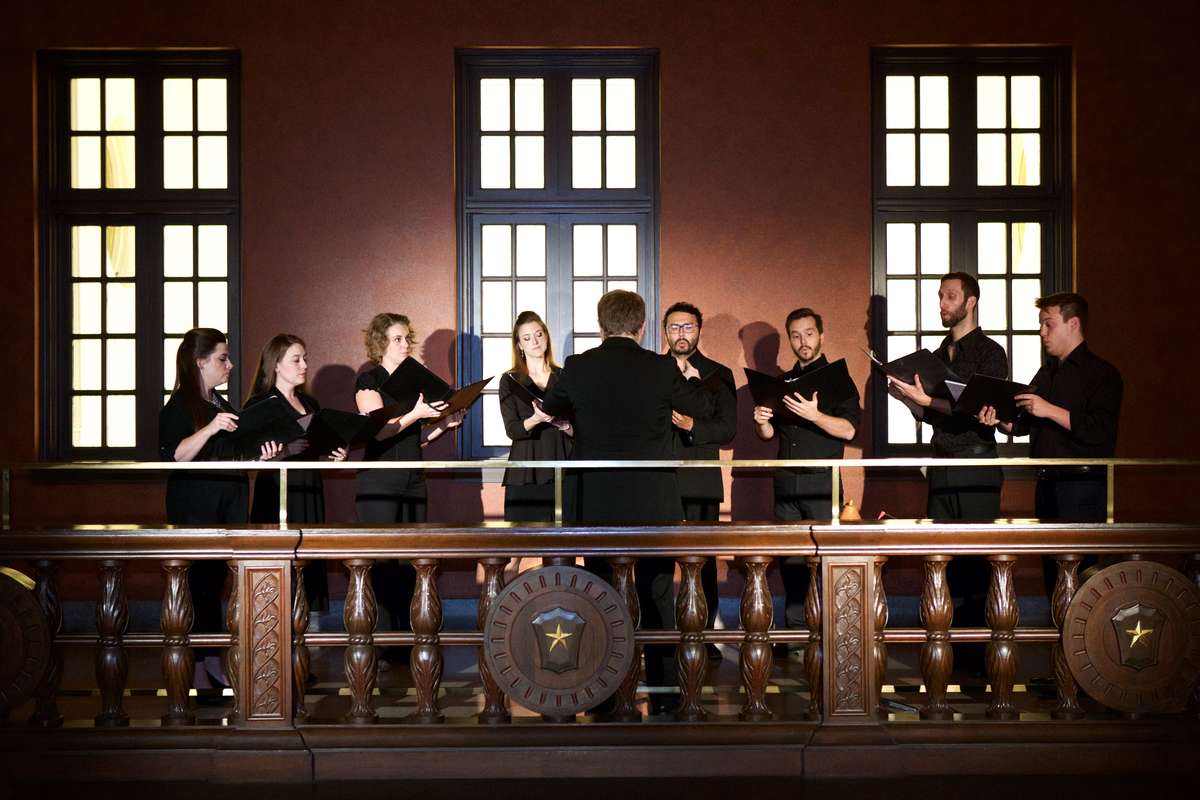 The reception was followed by a dinner in The Legacy Room at Houston City Hall, where The Hon Jim Schieffer, former US Ambassador to Australia and Japan, gave an inspiring keynote address.

The second event held by the Archaeological Institute of America (Houston Society) and cosponsored by the Houston Museum of Natural Science – Secrets from a Watery Grave: the USS Houston and HMAS Perth by Dr Jay Thomas of the US History and Heritage Command – saw 200 gathered for an inspiring presentation about the battle and the current condition of the wrecks. Both of these events have highlighted a significant piece of Texan history and ignited an interest in our exhibition. 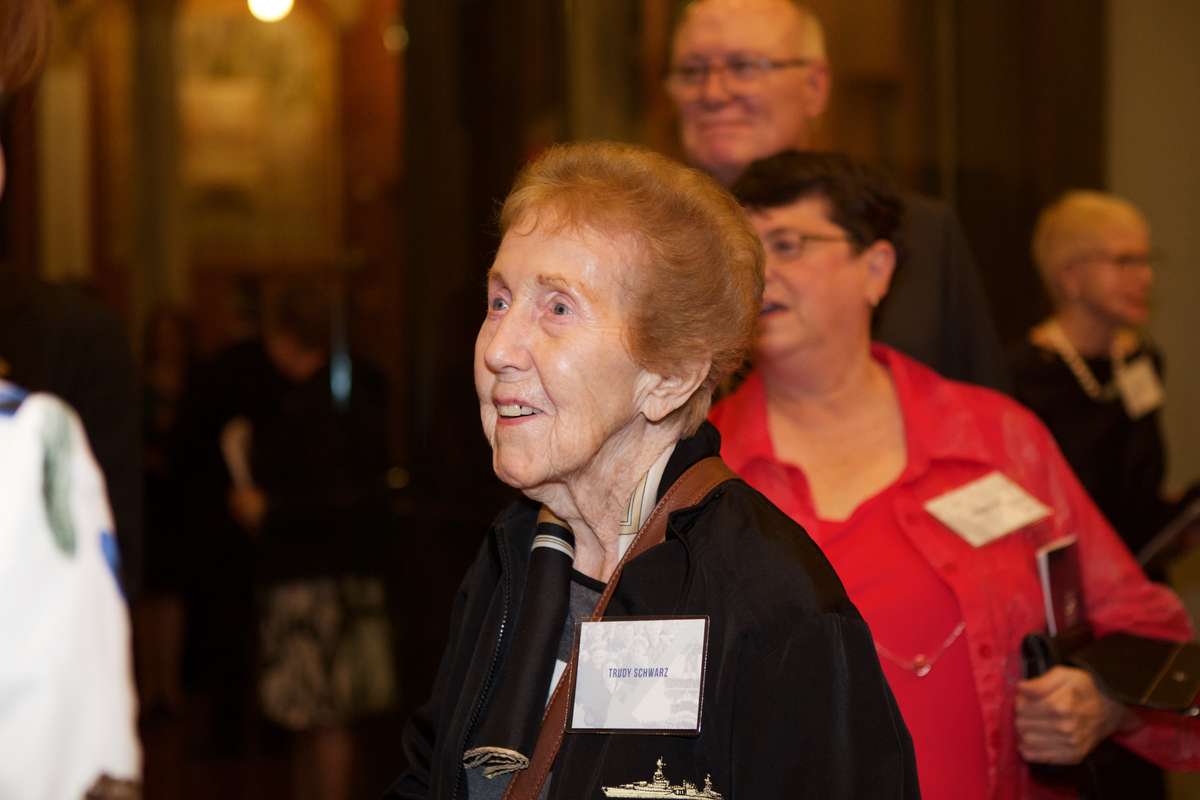 I gave a private tour to 25 members of the USS Houston Survivors’ and Next Generations Association. They are widows, sons, daughters, nephews and nieces of Houston men and for one family it was an especially moving time. We have on loan from the Australian War Memorial an iconic piece of POW history. It’s a cotton undershirt which has been signed by American and Australian survivors from one of the Japanese coal mine camps. I had identified seven USS Houston names on it, and was hoping that perhaps someone might recognise one or two of the names. Seeing that a family had the same surname as one I had identified, I took them into the exhibition ahead of the others to see the signature of Albert Krekan. Their stunned looks followed by tears confirmed my thoughts that they knew nothing about this piece of tangible history linking them to their father. That alone has made the exhibition more than worthwhile. 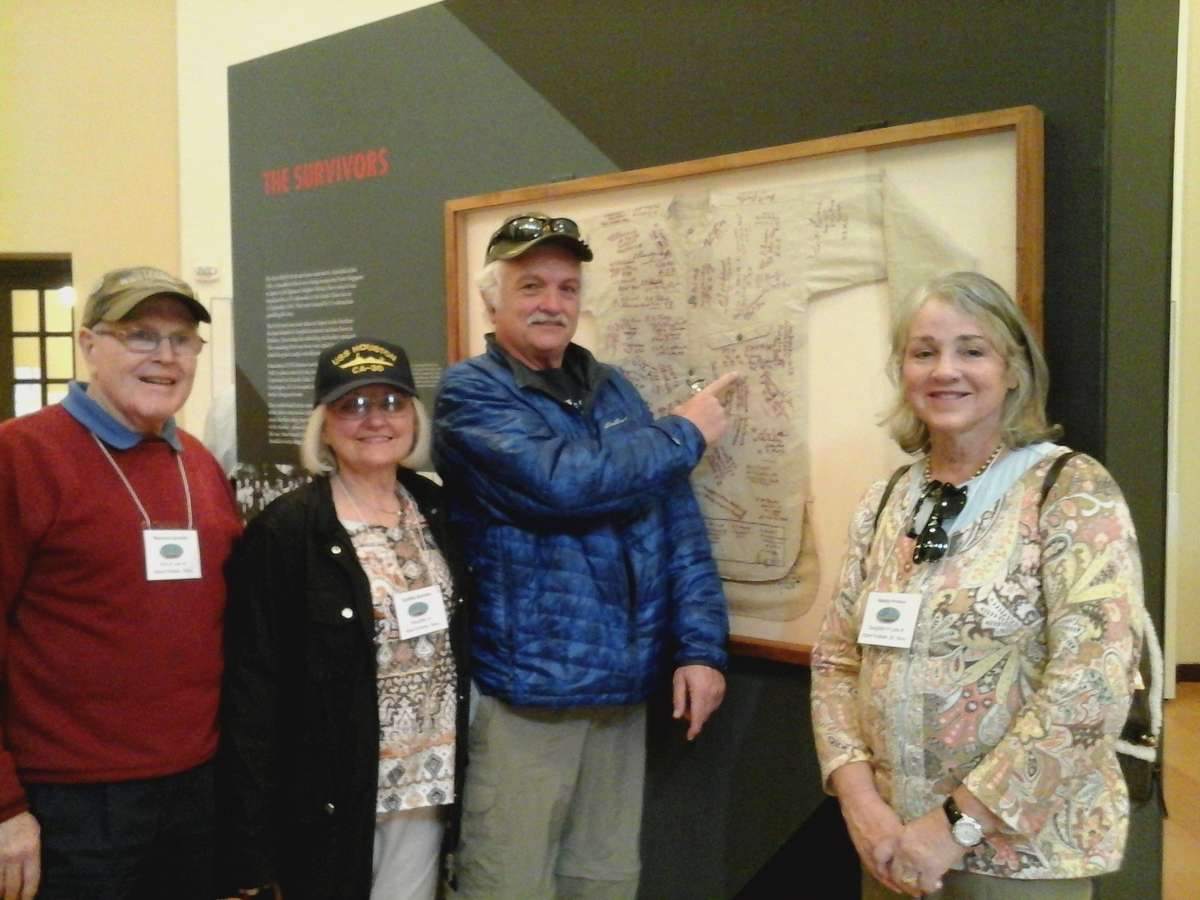 The memorial service for USS Houston was another solemn event. It is held each year in the Sam Houston Park, where a granite monument to the ship was erected in 1998. Our exhibition has reignited discussion for HMAS Perth to be recognised in some way in the vicinity.

Guardians of Sunda Strait is more than the exhibition at Houston’s Julia Ideson Building. Last week the museum joined the US, Britain and The Netherlands in remembering the ABDA (American-British-Dutch-Australian) Forces with an exhibition at the Museum Bahari, Jakarta. The design, graphics and text were modified from our exhibition to present four panels on HMAS Perth‘s role in ABDA, the Battle of Sunda Strait and our archaeological team’s work. And running concurrently with the exhibition here in Houston is a banner version which will travel around the US visiting museum warships affiliated with the Historic Naval Ships Association. First stop is the USS Texas. Commissioned in 1914, it is the last WWI-era dreadnought battleship.

It’s been a hectic two weeks for me and a fine end to just over three years of research, object and graphic selection, design, preparation and label writing. I’d like to sincerely thank Kevin Sumption for giving me the opportunity to curate this exhibition and to give voice to the men of Perth and Houston and their families. Thanks also to Richard Wood, Will Mather, Anupa Shah, Michelle Linder and Inger Sheil for their magnificent behind-the-scenes work, support and encouragement from the museum’s Curatorial, Registration and Exhibition departments; and to Carola Salazar and Virginia Buckingham for their fantastic designs – you ladies ROCK! A great big thank you to Danielle Burns Wilson and Nana Booker in Houston, without whose help I would never have finished it all in time!

Explore more stories of War and Peace in the Pacific during World War II in our feature stories, including the Bombing of Darwin and the Attack on Pearl Harbor.