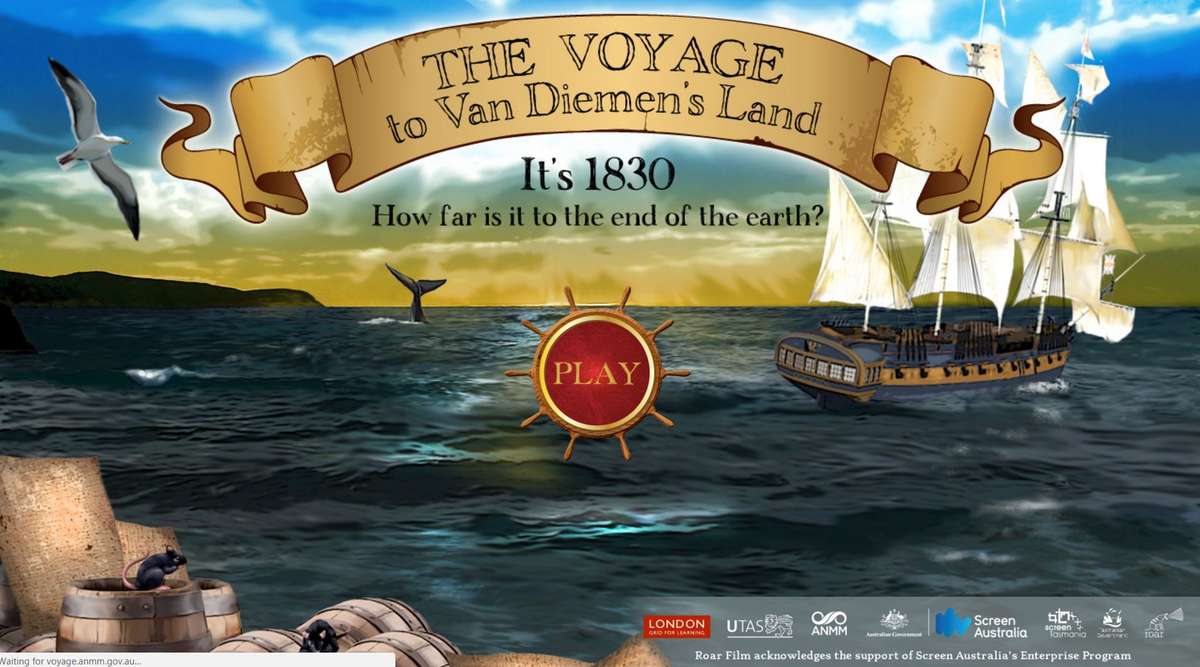 On 30 November 2015 the museum launched our new educational game, The Voyage, at the Tasmanian Museum and Gallery in Hobart.The Voyage is a ‘serious’ game based on the transportation of convicts from Britain to Van Diemen’s Land in the early nineteenth century. The game is a joint venture with Roar Film Tasmania, The Australian National Maritime Museum, University of Tasmania, Screen Tasmania and Screen Australia.

The Voyage takes the user on a journey from London to Van Diemen’s Land (now known as Tasmania) where players, as the ship’s Surgeon Superintendent, are rewarded for the number of healthy convicts they deliver to the fledgeling British colony. The game is based on detailed historical data, utilising documented ship paths, convict and medical records and diaries, combined with humour and games that enrich the game playing experience.

To date over 63,000 people have played the game – from all across Australia (for example 7,000 players in Queensland alone!) and around the world, with a large proportion of players from the United States and Europe. The Voyage is available to UK schools via the London Grid for Learning and also to Australian schools through the ANMM website and ABC Splash online education portal. The game is accompanied by online resource material for students and teachers, a small pop-up exhibition with four text panels to accompany the game when on tour and a series of films that provide further context to the game.

Our engagement stats are really impressive, with 45% repeat players, an average of 23 pages per session and a playing duration of 20-25 minutes. In 2016 The Voyage won a prestigious Museums and Galleries Australia MAGNA award and was highly commended in the Museums and Galleries of NSW IMAGinE awards. Just last week the game also won an ATOM (Australian Teachers of Media) award for Best Educational Game – we were super chuffed about this one!

We constantly receive really good feedback from players and have made several changes in response to these. Most recently, Year 5 students (aged between 11-12 years) at a northern beaches public school undertook a classroom exercise, sending letters to the museum’s Chairman, Peter Dexter, with their feedback about the game (see some example letters below, click to enlarge). One area they highlighted, and which others have too, was the question around what happened to the Indigenous people of Tasmania? Even though technically the game stops once the player reaches Van Diemen’s Land, we felt that this was an important issue to address. 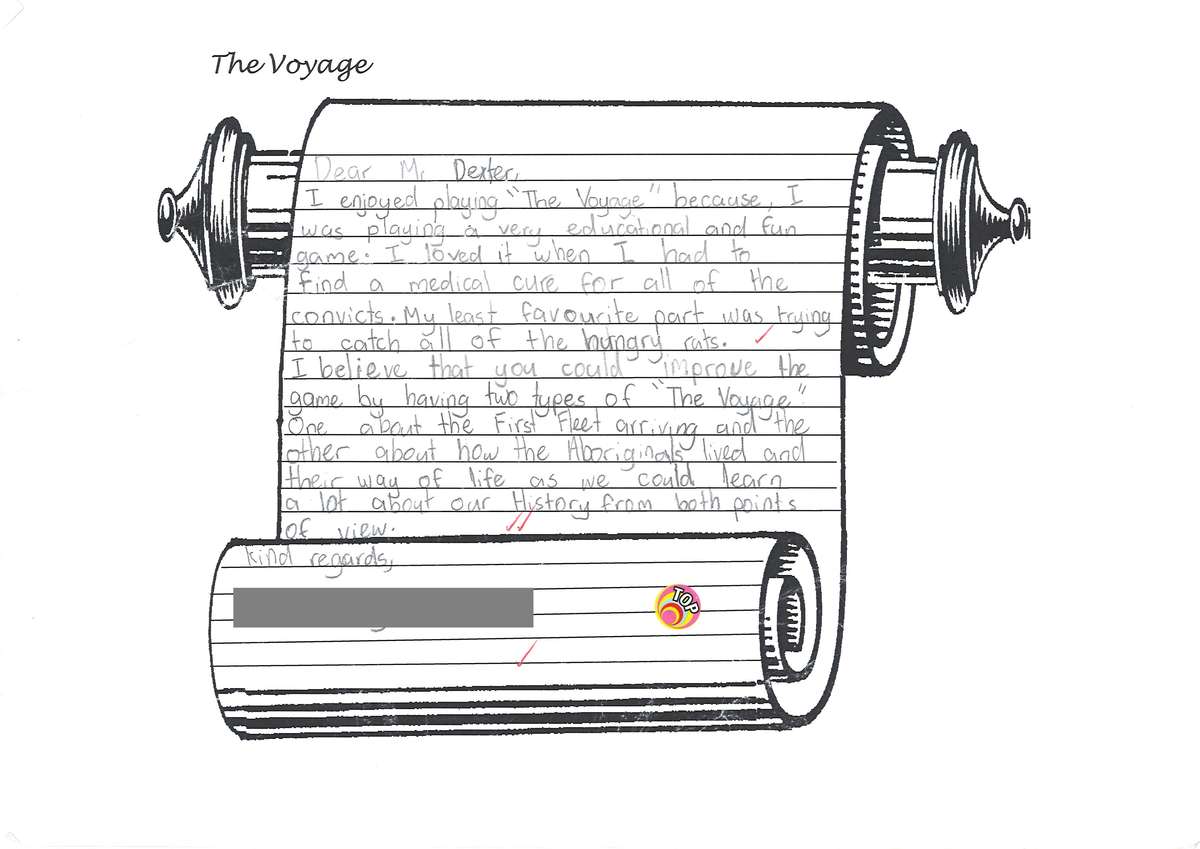 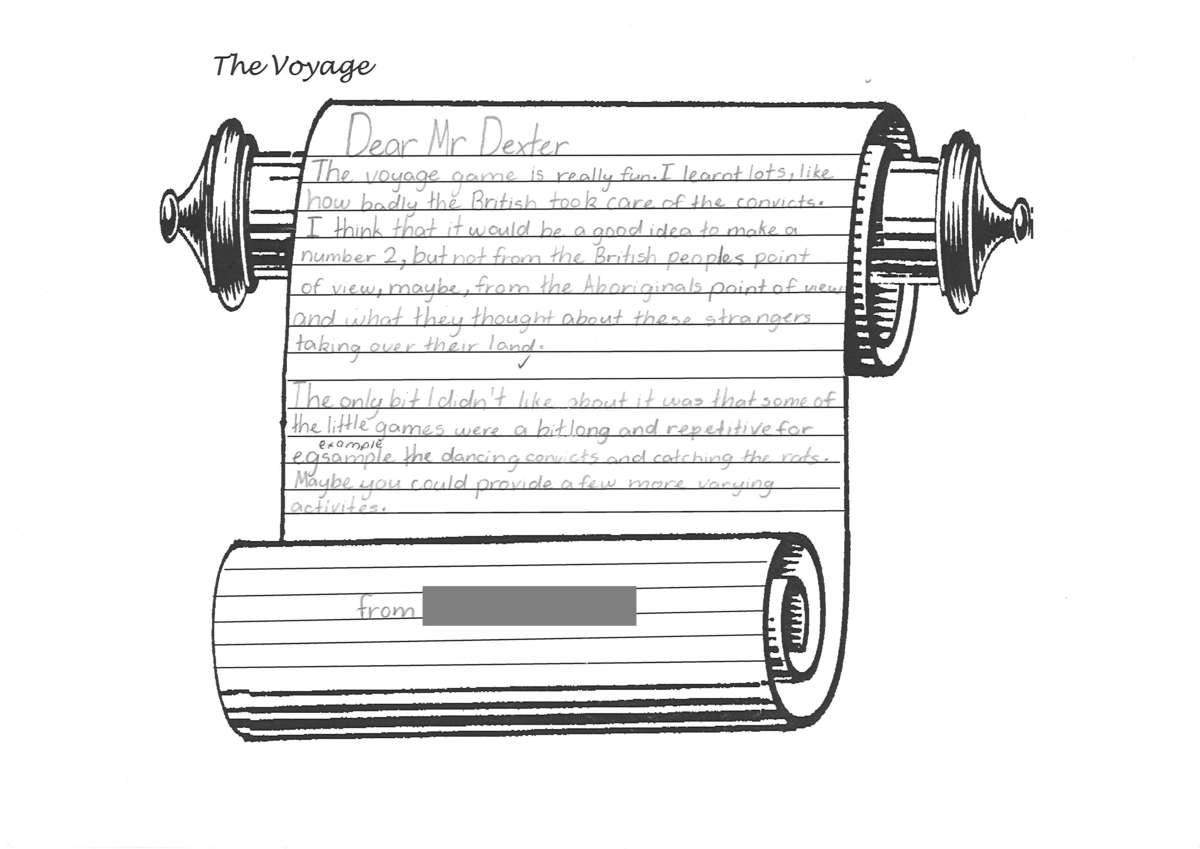 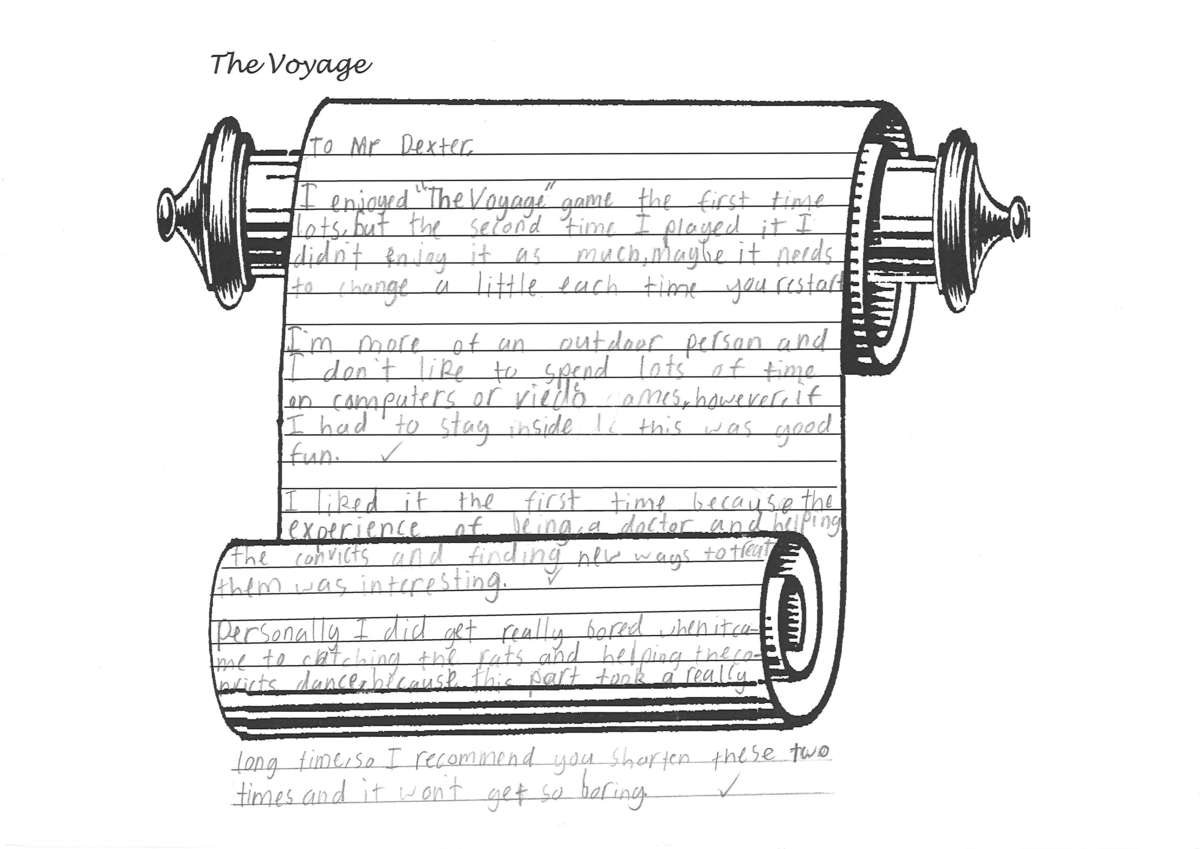 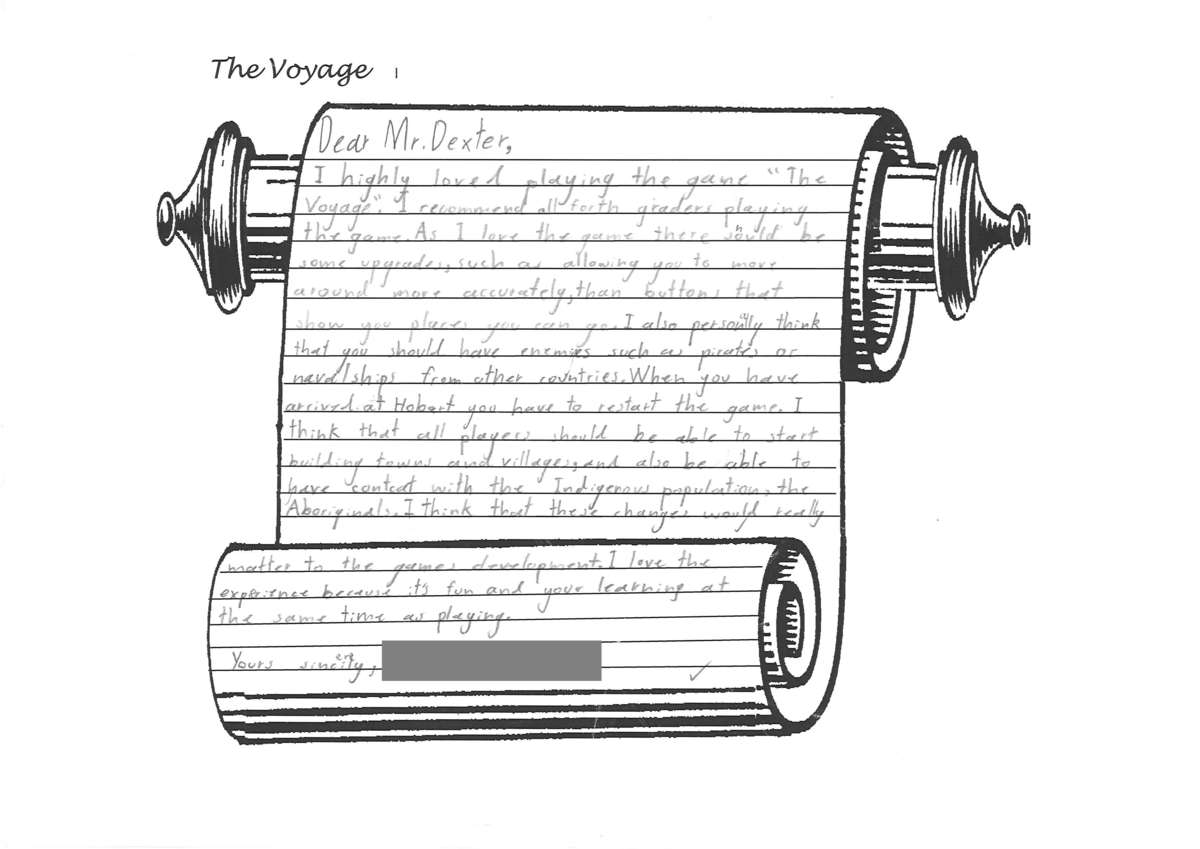 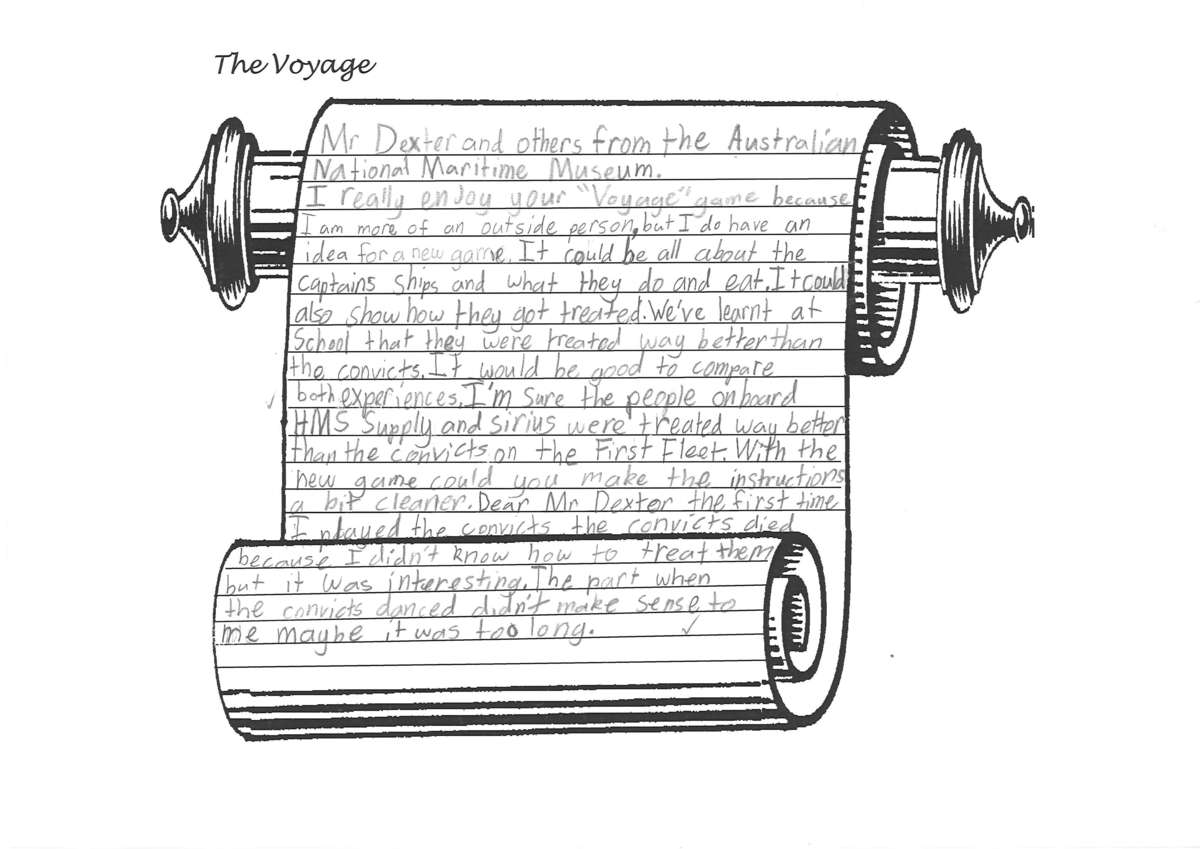 To this end, Roar Film, working with Indigenous staff from the Tasmanian Museum and Gallery and community elders, made two short films showing the impact of convict voyages on the local population:

These resources (and more!) are available on the museum’s website and you can play the game online here.

Congratulations to all who have been involved in this exciting project so far.

We look forward to the development of our next educational game, Wreck Seeker. Watch this space!