‘No tribute could be too high or too glowing for this great lover and promoter of art and photography in Australia.’— Max Dupain writing about Harold Cazneaux’s legacy in 19781.

If you weave your way through the imagery and beautiful photographs in Through a different lens – Cazneaux by the water, you’ll notice that 1937 was a big year for Australian photographer Harold Cazneaux: the culmination of a forty-year career that corresponded with the dawning of the Australian nation, and an emerging national consciousness.

1937 brought worldwide acclaim for the photographer, who for the previous 20 years had been a leader in an elite group of largely amateur Sydney photographers championing pictorialist photography, among them Cecil Bostock, Monte Luke, Norman Deck, James Paton and James Stening.

Cazneaux was above all an aesthete who had struggled to successfully combine his art interests with the demands of a commercial photographic practice since the late 1890s. 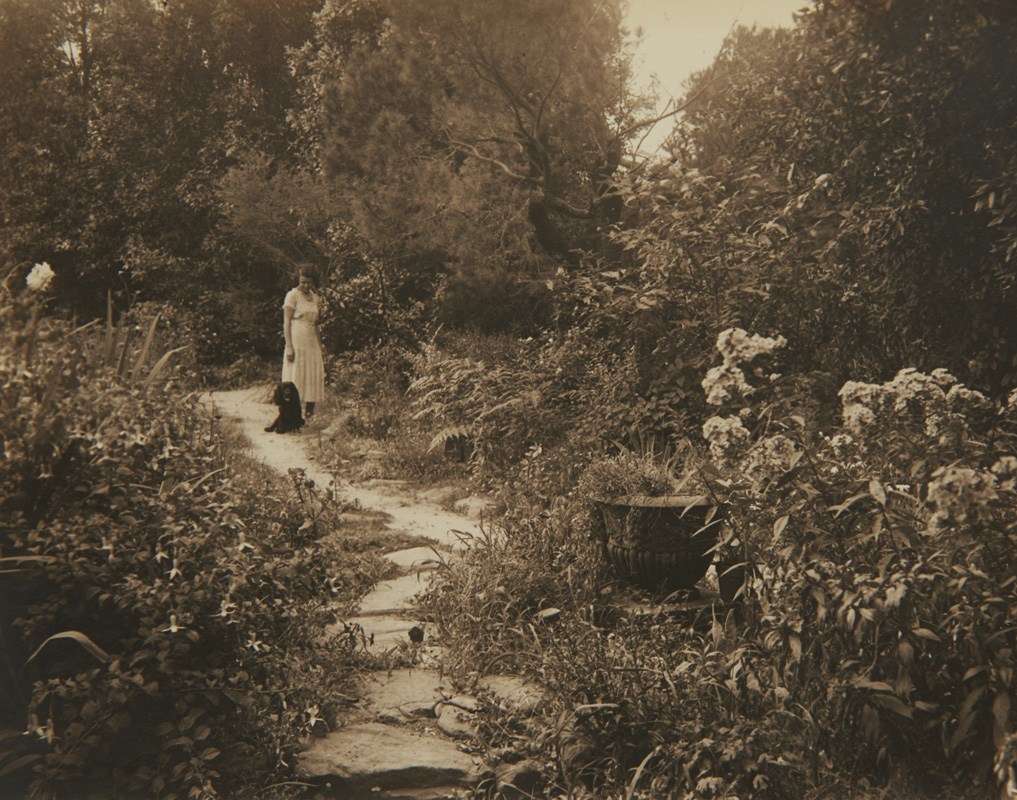 In the garden. Image: Reproduced courtesy the Cazneaux family. 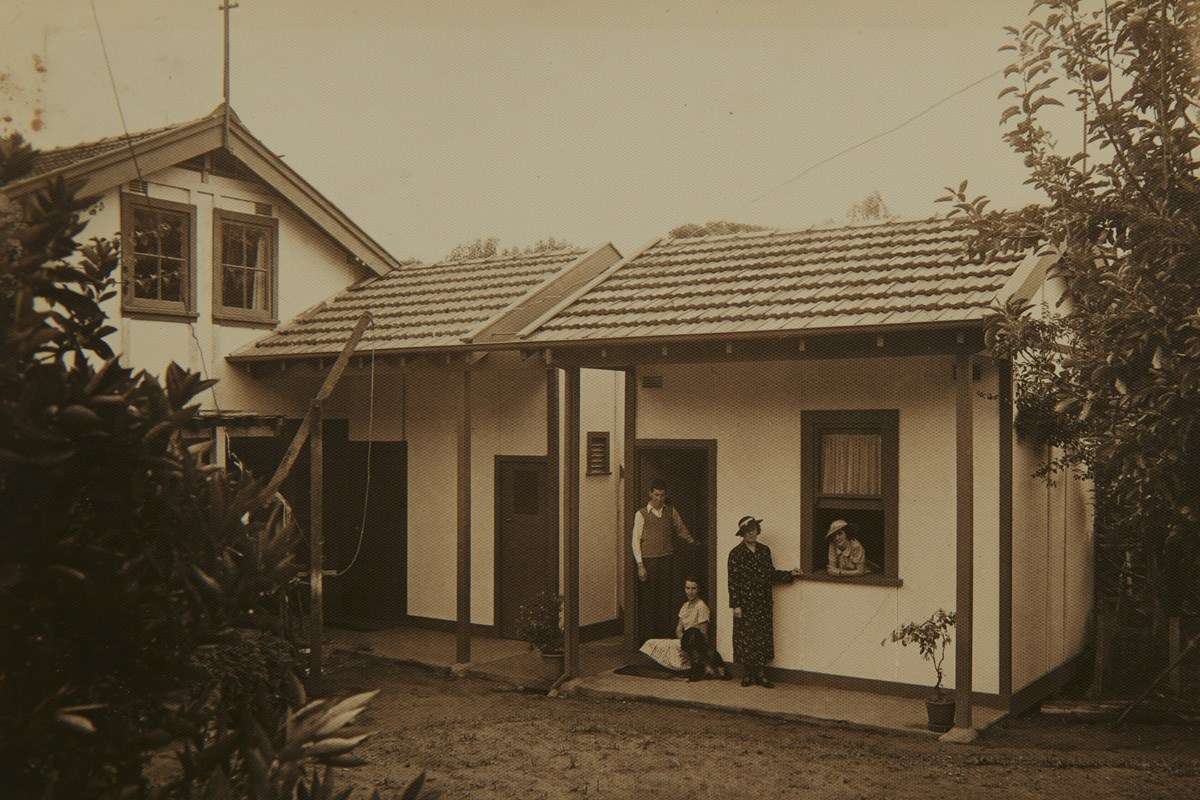 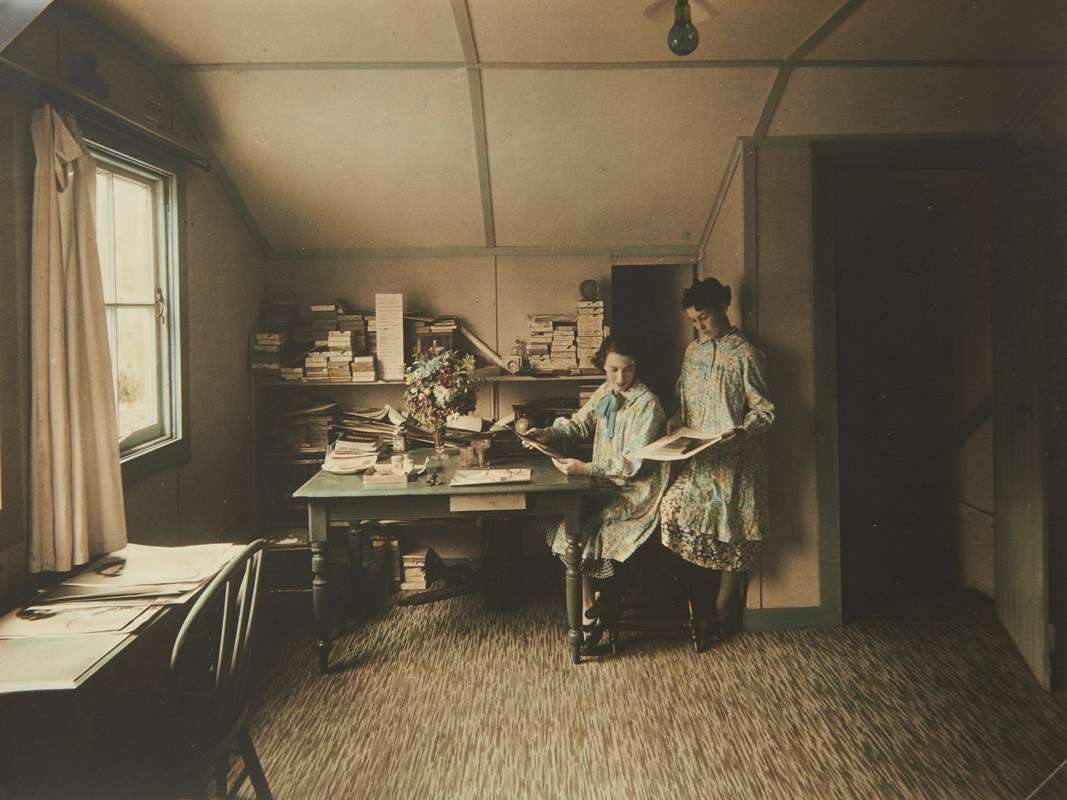 Inside the home studio, with Cazneaux’s daughters. Image: Reproduced courtesy the Cazneaux family.

After huge critical success in 1905, mounting tensions between creative and commercial studio work as well as a health breakdown, Cazneaux established his studio at his home Ambleside, in the northern Sydney suburb of Roseville. His career and personal life blossomed in the 1920s, especially with patronage from influential modernist artist and publisher Sydney Ure Smith. Ure Smith contracted Cazneaux to his mastheads Art in Australia and The Home. Both publications imbued in the fervent pictorialist a modernist sensibility where abstraction, angle and form became as important as mood and message. 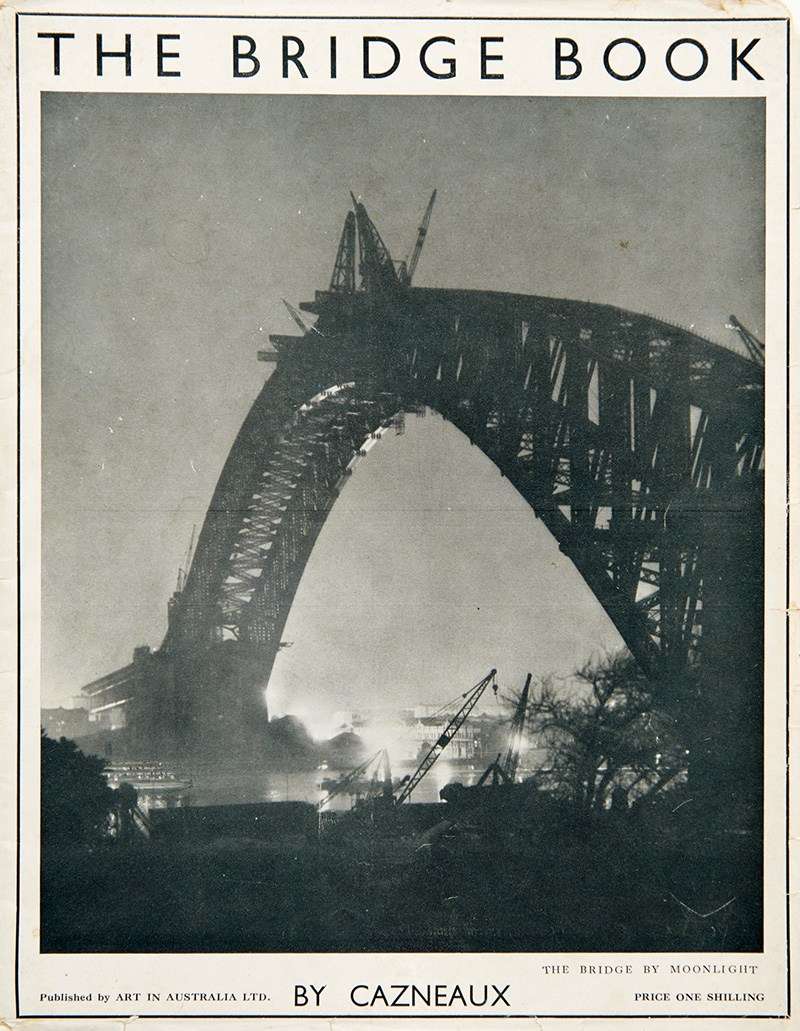 Throughout his career, Cazneaux’s aesthetic continued to combine the search for beauty, mood and poetry in the image. It infused his commercial practice, resulting in his enduring picturesque views of the inner reaches of the working harbour for the Sydney Harbour Trust, sunlit, bread and butter portraits taken in his Roseville garden and steamy muscular industrialscapes for Broken Hill Proprietary Ltd from a commission completed in New South Wales and South Australia from 1934-37 in Port Kembla, Newcastle, Whyalla and Port Pirie.

In 1937 the eminent photographer, a year shy of 60, was recognised internationally with accolades in the UK and US.

In England, he was awarded an honorary fellowship of the Royal Photographic Society of Great Britain. His work had been regularly selected and received awards in exhibitions in London since 1909, at the Salon and at the Overseas and Colonial Exhibition, and was often published and reviewed. He had been a reporting on pictorialism in Australia for Photograms of the Year since 1919 (after a false start in the year prior when his first article was lost en route from Sydney to London during the war).

In America, Cazneaux was invited to exhibit in the San Francisco Invitational Salon of International Photography, an honour acknowledging his regular representation in American salon exhibitions and publications since 1912, including the journal Camera Craft.

With such international recognition in 1937 came a changing of the guard: the winding down of Harold Cazneaux’s illustrious pictorialist career and the rise of the modernist photographer, 26-year-old Max Dupain, the other Australian invited to San Francisco Invitational Salon in 1937. At times, both photographers worked for Sydney Ure Smith.

In 1937, both photographers took what are arguably their best-known images of Australian identity: Cazneaux’s image of a red river gum clinging to the dry earth, entitled The Spirit of Endurance, and Max Dupain’s Sunbaker.

Both were taken on intimate camping trips with family or friends – Cazneaux’s on a trip to Wilpena Pound in South Australia with his wife Winifred and son Harold, seeing his eldest daughter Rainbow and son-in-law Hugh. Dupain was on a camping trip to Culburra on the South Coast of NSW with friends, including photographer Olive Cotton, who would soon become, briefly, his wife. 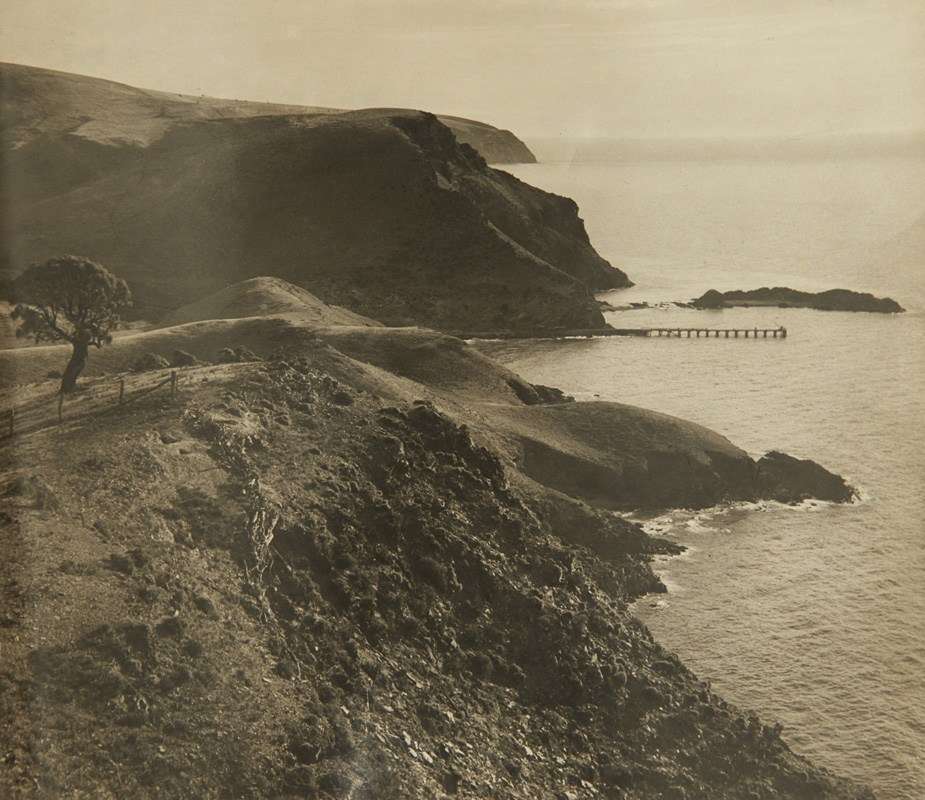 Harold Cazneaux, ‘Second Valley’ or ‘Where the hills roll down to the sea’, 1937, Gelatin silver print. Image: Reproduced courtesy the Cazneaux family. 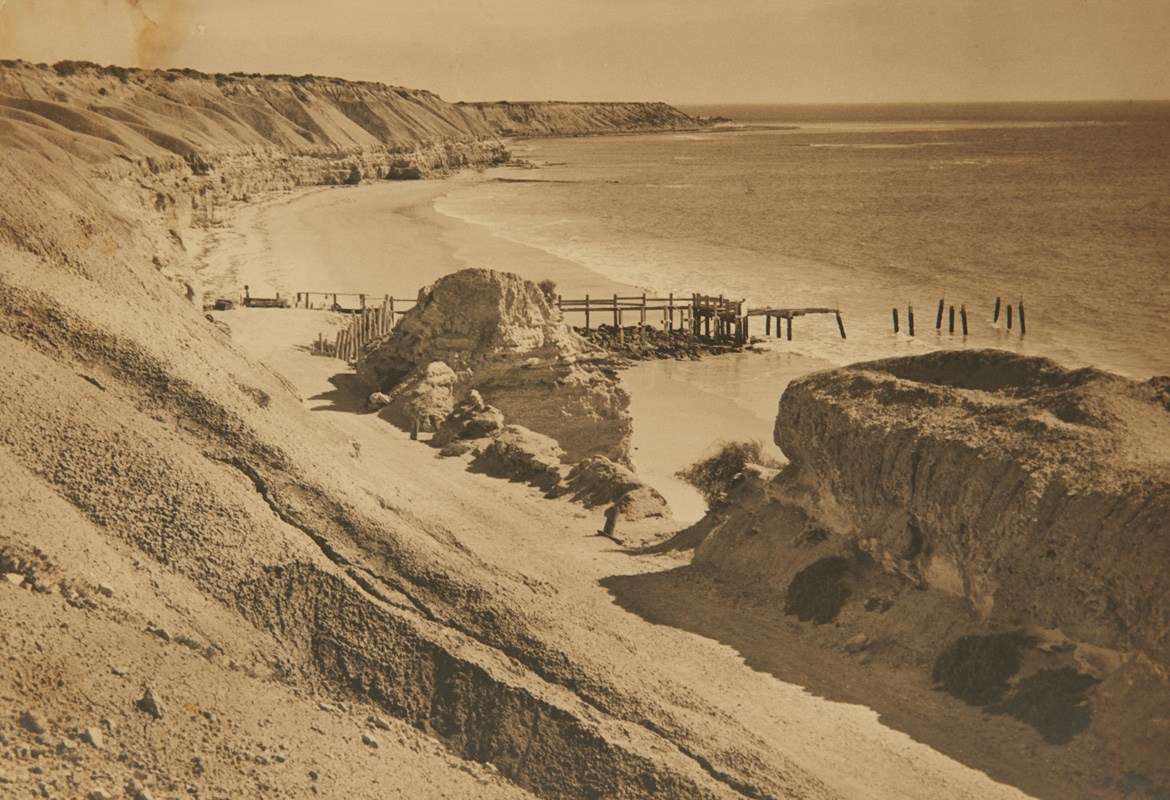 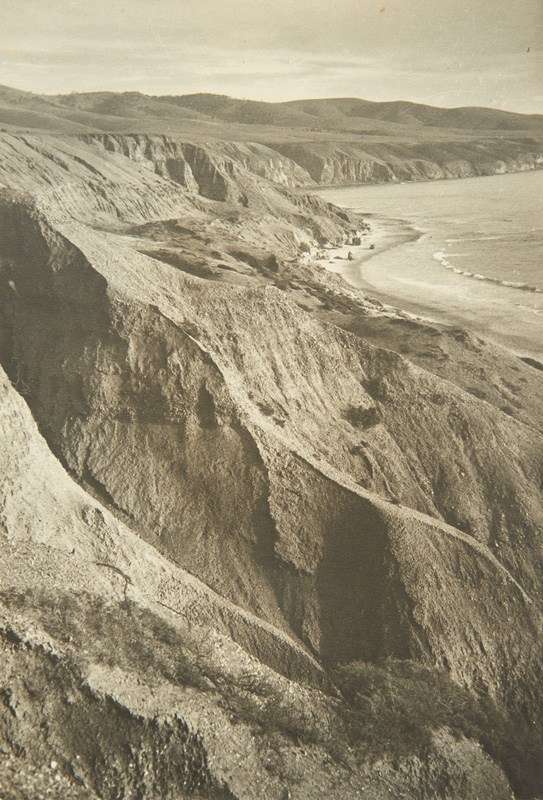 Cazneaux’s The Spirit of Endurance received immediate recognition when published and exhibited later in 1937 (in London as A Giant of the Arid North), while Dupain’s Sunbaker was a slow burn. It was featured by Hal Missingham in his Dupain monograph published by Ure Smith in 1948, in a slightly different version. It was not until 1975 that a second version of the image was rediscovered when exhibited at the Australian Centre of Photography, 40 years after it was taken.  In 1937, Dupain’s star was rising but the following year, Dupain was critical in the print media about Cazneaux’s selection for an exhibition to mark the Australian sesquicentenary.

Cazneaux maintained his profile and his practice, exhibiting widely and internationally, yet gradually wound down as the war years passed. Materials shortages impeded his practice but it was the loss of two family members which distressed him terribly. During World War I, his 21-year-old son Harold was killed at Tobruk, while his son-in-law, Rainbow’s husband Hugh, was lost when his ship HMAS Hobart was torpedoed in the waters off the Solomon Islands in July 1943.

In 1952, Cazneaux was honoured in a travelling presentation of his work, mounted by photographer and writer Jack Cato. In 1953, he died in bed of heart failure and was cremated in the Northern suburbs Crematorium. 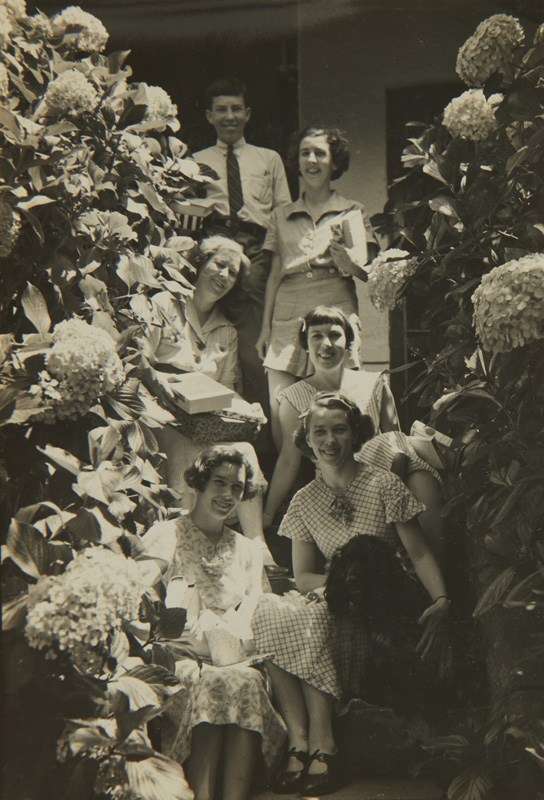 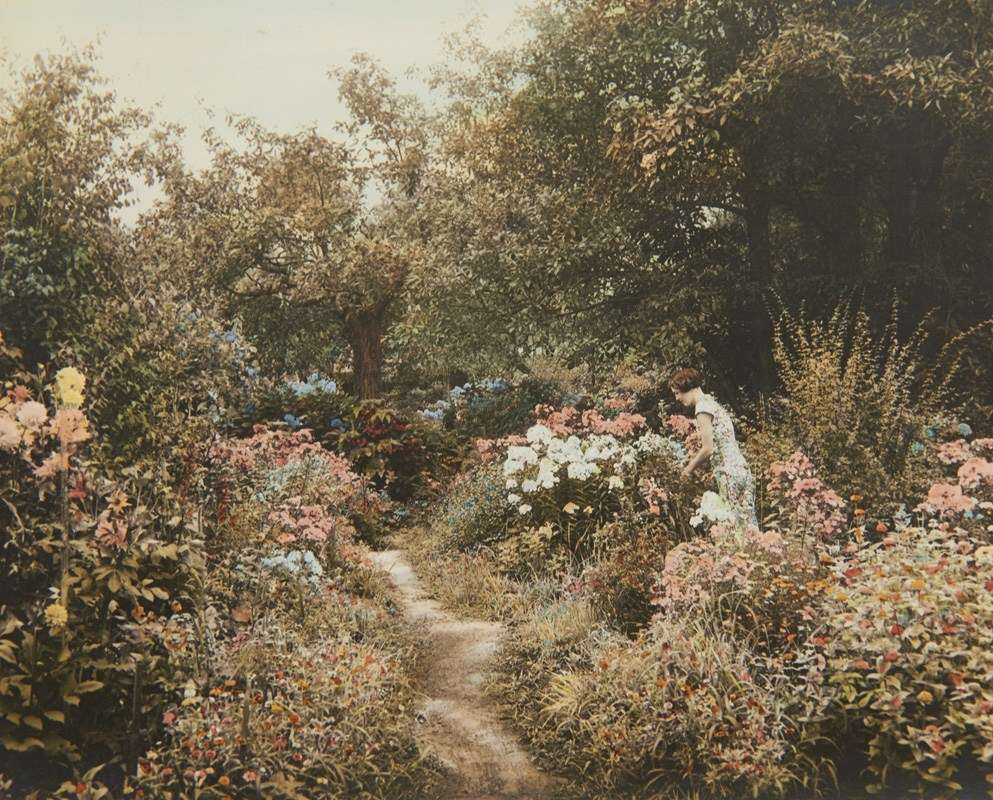 In the garden. Image: Reproduced courtesy the Cazneaux family.

Cazneaux ’s family were his backbone. His eldest daughters worked as his studio assistants and kept the books. Through a different lens takes us from the private world of Harold Cazneaux in family albums2, his account and appointment books, travelling bag and duster coat from days on the road and into the studio with his early experimentations. Poetic river and harbour scenes from 1904, the larger muscular industrial waterscapes, ships arriving and departing, boating views, car ferry wharves, wharf workers, bridge views, scenes around harbour nooks, beach views and coastal landscapes from his South Australian trips in the 1930s are all presented. 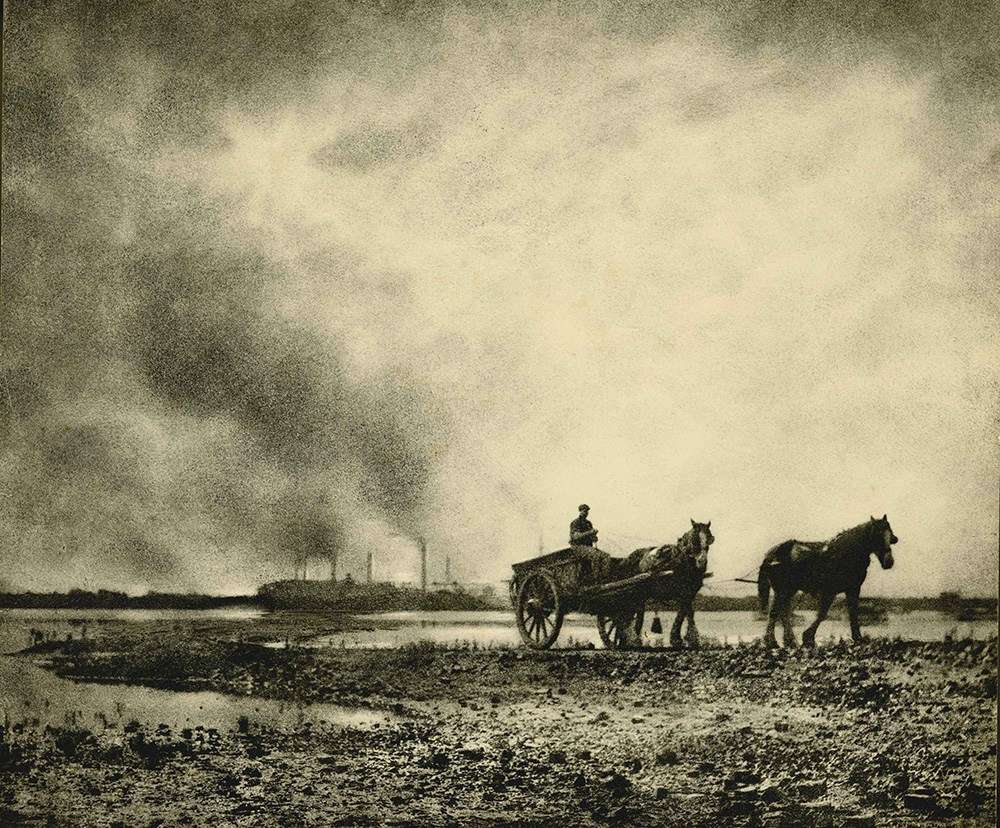 In 1978, Dupain wrote of Cazneaux’s landscapes: “There is a serenity about them…No jarring note occurs anywhere and the masses are arranged with creative selectivity… They are painterly in a photographic way, and there is a romantic purity in the longshots that gives the mind and the eye a great sense of relief.  … light, form, texture and movement make up  the synthesis of these pictures, with an occasional dramatic punctuation from the Flinders Ranges – ‘Spirit of Endurance’ is heroic in stature and endeavour.3

Through a different lens – Cazneaux by the water is now open. Soak up some of Harold Cazneaux’s most beautiful photographs with our FREE galleries ticket.

View all posts by Daina Fletcher→
Posted in: Exhibitions , Arts and Culture
↑