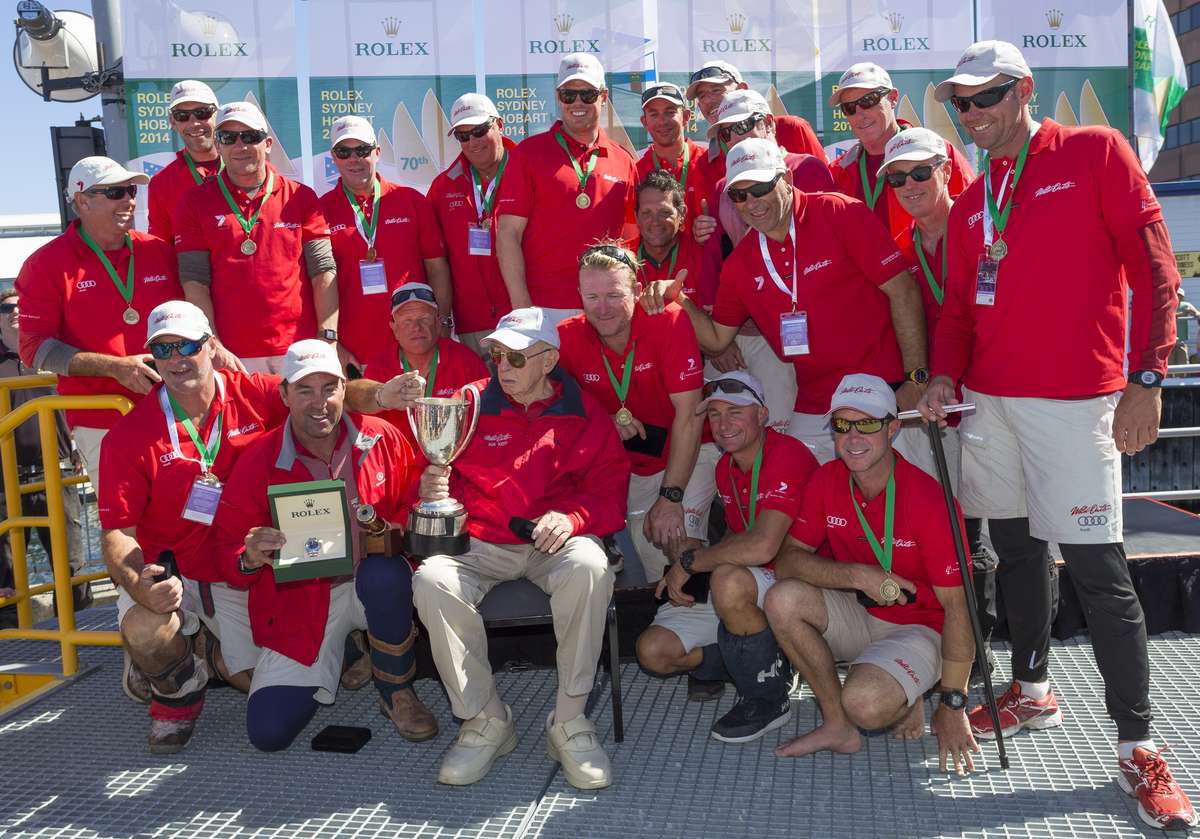 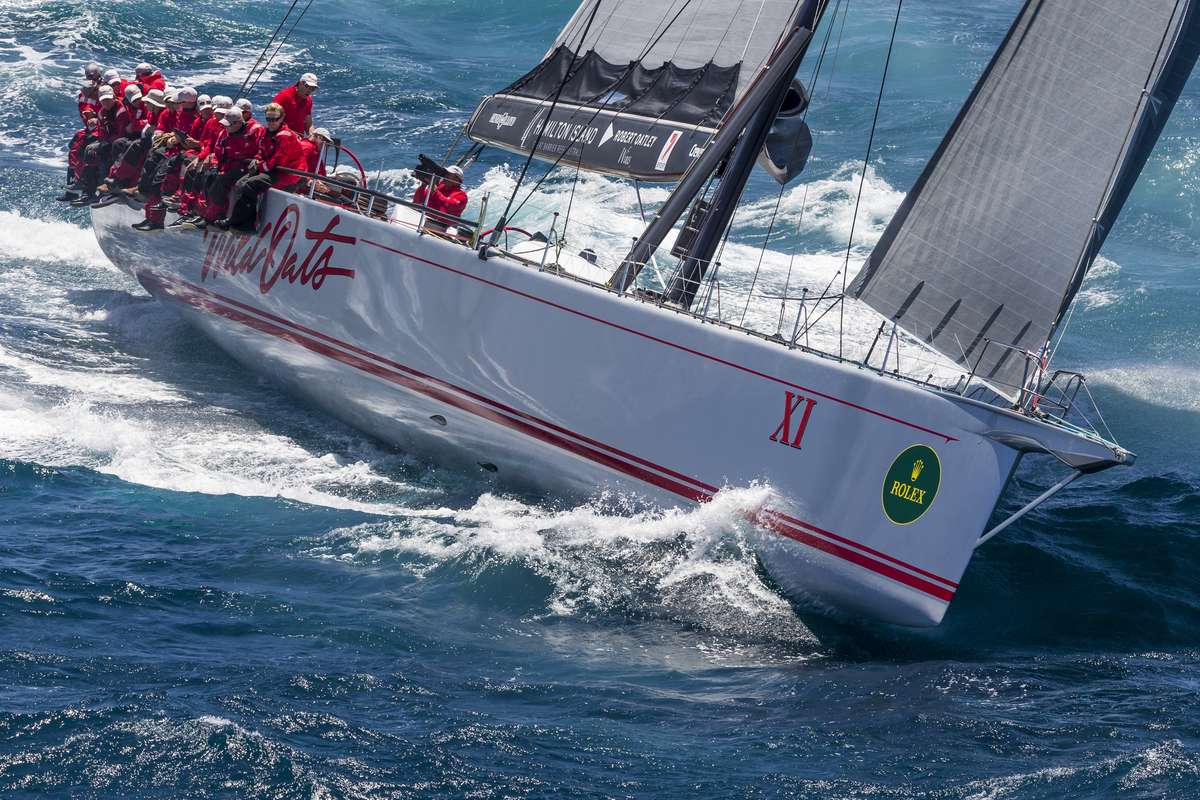 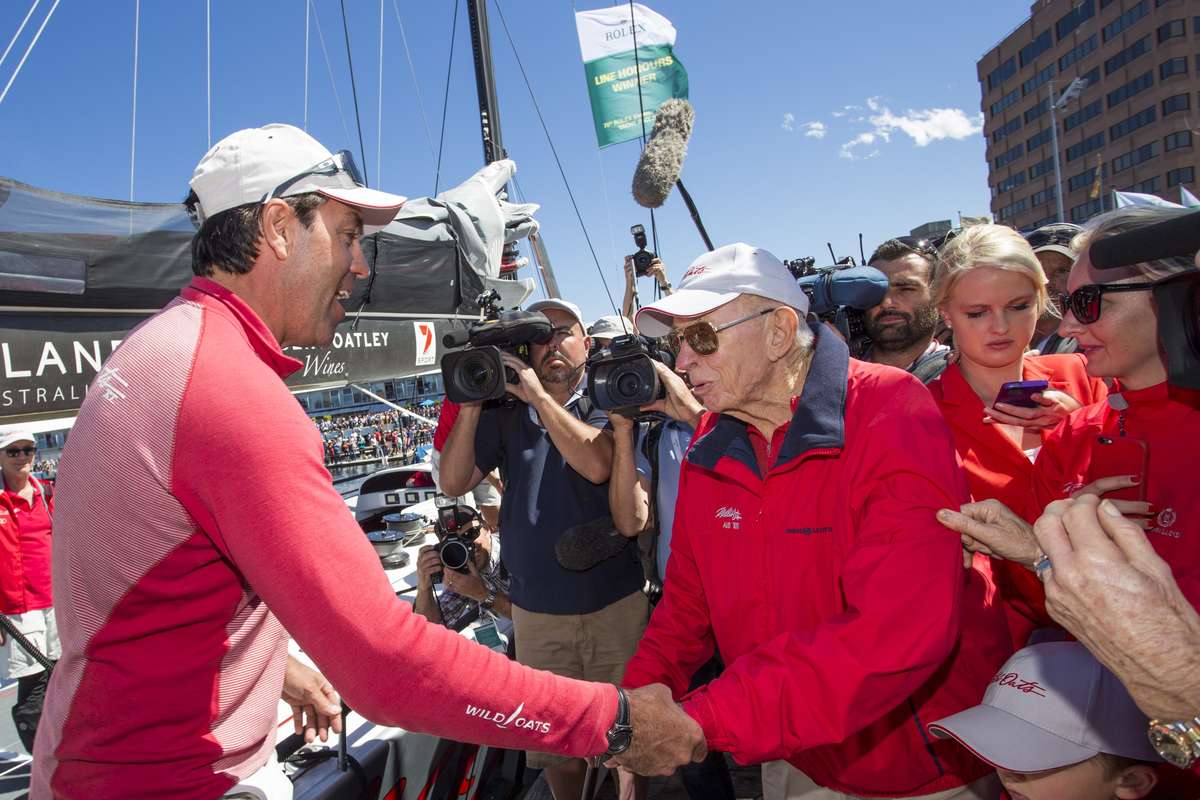 Robert Ian ‘Bob’ Oatley AO BEM was a well-known and respected businessman, winemaker, yachtsman and philanthropist. To the Australian public he was best known for his first winemaking company, Rosemount, and his last yacht, the eight-time Sydney to Hobart winning super maxi Wild Oats XI. His business background has been widely covered in the media since his passing was announced, but his wide-ranging support for yachting deserves to be highlighted as well.

He was born in the Sydney harbourside suburb of Mosman, and attended the local public school. His grandfather had been a sailor, his father a first-grade cricket and football player. The two influences came together with Oatley’s longstanding involvement in ocean racing. His first boat, though, was a canoe that he eventually rigged with a sail. Later he was member of the local Balmoral Sailing Club sailing in their dinghy classes.

His first Wild Oats yacht was an IOR era Farr 43, designed for top-level ocean racing in Australia, but also built with the hope that it would be selected for the Australian Admiral’s Cup team, and race for the pinnacle trophy in ocean racing. Unfortunately it did not make the team, but Oatley continued his involvement in the sport, and eventually had his triumph.

His later yacht Wild Oats X was an American-designed Reichel Pugh 66 (20 metres) and one of the pocket maxis of the early 2000s. It was also one of the first racing yachts in Australia with a canting keel. This state-of-the-art boat helped develop the canting keel concept and everyone’s understanding of its potential through many races on the east coast, and it became a three-times winner of the Sydney to Coffs Harbour race in 2005, 2006 and 2011.

After a severe illness in the early 2000s Bob’s ability to sail on his yachts was severely limited, but it did not diminish his enthusiasm or satisfaction. Not long after, Wild Oats X had its greatest moment was when it teamed with Aftershock, and the Royal Prince Alfred Yacht Club on Pittwater won the Admirals Cup in 2003, the last year the contest was held, in tense circumstances. The Spanish team were leading into the final race, and both Aftershock and Wild Oats X won their divisions for Australia to overtake the Spanish and claim the trophy.

‘It’s really special, we’re just so happy,’ enthused Oatley. ‘We just can’t believe it, people are waking up everywhere and coming in the door, it’s absolutely unbelievable, the thrill of a lifetime. To win it on the last race, and in a pretty convincing fashion, also top boat of the regatta, it’s really spectacular.’

Soon after the Wild Oats team began planning for the next boat – the famous Wild Oats XI, a 30-metre-long Reichel Pugh–designed super-maxi, built in Mona Vale, NSW, by McConaghy Boats. Launched late in 2005 it grabbed the public’s attention as it led out of the harbour and all the way to Hobart in the 2005 Sydney to Hobart race, setting a new race record and winning on handicap, a treble win that it repeated in 2012. In 2014 it took on the famous TransPac ocean race, a downwind ride from Los Angeles to Hawaii, and a race run with an extended handicap start. Some days after the fleet’s first yachts had left, Wild Oats XI set off in the last group, and reeled almost all of them in one by one.

The yacht has under gone numerous configuration changes, including a deep rudder, a canting bulb keel, a canard centreboard, twin daggerboards, and Dynamic Stability System (DSS) lifting foils that project horizontally. These various appendages, many of which retract, have earned it the nickname ‘the Swiss army knife’. For 2015, reacting to the reaching speeds of Comanche, the radical newcomer from the USA, the hull was reconfigured with a new longer bow and the loss of some length at the stern to bring it back to the maximum limit of 30 metres.

Many times in his life Oatley took business decisions and charted a course that reflected his strong commitment to Australia, and this was seen in his support for his stable of yachts and their skipper, Mark Richards. With eight line honours wins over 10 races, Wild Oats XI has become more than just Bob Oatley’s yacht. With the challenge of international yachts it has become the public’s Australian team, battling the likes of the UK’s Leopard and the USA’s Comanche to uphold our sporting honour.

When he bought Hamilton Island, Queensland, in 2003 for $200 million, it was seen as a shrewd business decision, but it also allowed him to take a major interest in the annual Hamilton Island Race week, and this has thrived under his support. His motives of competiveness and fairness came to the fore again when he initiated an Australian challenge for the America’s Cup in 2013 through the Hamilton Island Yacht Club.

At the conclusion of the series in San Francisco he had positioned the club to become the challenger of record, with the hope that this would secure a bargaining position with the American holders and influence the cup’s direction away from the extravagant spending required to support a team and open it up to a wider involvement. But within months the arrangements had fallen back into a pattern dictated by the cup holders, and once key decisions on the next series had been presented, Oatley and his team concluded it was not viable to continue as none of his aims had been addressed, so he pulled out.

Oatley was awarded the British Empire Medal in 1984, for his service to the coffee industry in Papua New Guinea where his business success began. In 2014, he was appointed an Officer of the Order of Australia. He and his wife, Valerie, had three children. He lived in Sydney overlooking Pittwater from Stokes Point, and was a key member of the Royal Prince Alfred Yacht Club. For many years he was associated with the Sydney Heritage Fleet, regularly attending their gala dinners and providing other support.

And he did not forget where it had all started for him. In 2014 the Balmoral Sailing Club celebrated 70 years as a strong family club within the local community, and Bob Oatley was there to support the club where he learnt to sail as a teenager.