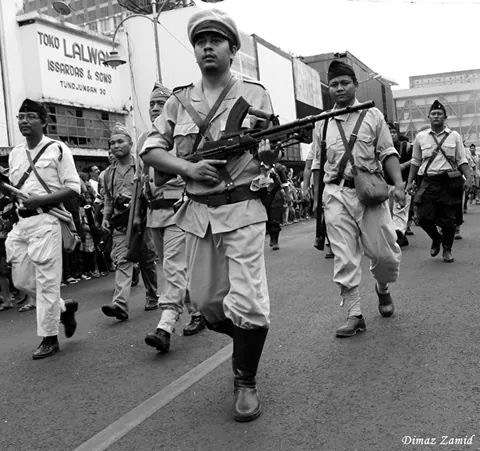 Hari Pahlawan or Heroes’ Day in Indonesia, like Anzac Day here, is taken very seriously. Every 10 November it is marked by a nationwide public holiday and surviving veterans and families of fallen soldiers march in parades across the country, very much like Australia’s Anzac Day parades.

Both events commemorate a military defeat. Australians commemorate the disastrous Gallipoli Campaign on the fateful day the Anzacs landed, 25 April. Indonesia’s Heroes’ Day commemorates the start of a three-week battle that was also a terrible defeat for the Indonesian forces involved. 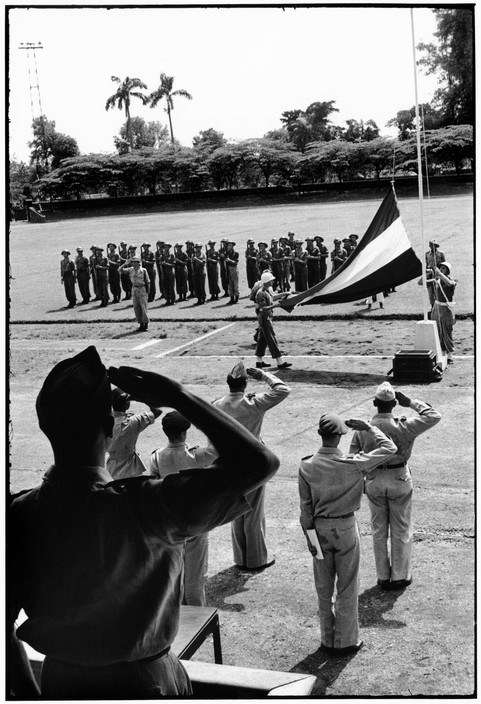 In Solo in 1949, the Dutch flag comes down and the Republican flag is raised at a ceremony in the town stadium. Tropenmuseum, part of the National Museum of World Cultures

2015 marks the 70th anniversary of Indonesia’s declaration of independence and the beginning of the Second Police Action between Indonesian nationalists and Allied and Dutch forces between 1945 and 1949. The Battle of Surabaya (27 October to 20 November 1945) stands out in the struggle as the fiercest and deadliest of the conflict, and for its significance and impact on the independence movement at the time.

When Japan was defeated in August 1945, ending World War II, British forces were ordered to Indonesia to take their surrender, repatriate prisoners of war and pave the way for the return of the colonial Dutch. But Indonesian nationalists had declared independence on 17 August and vowed to defy their return. They gathered what arms they could from the Japanese forces who were in a state of limbo, awaiting the Allied forces to arrive. 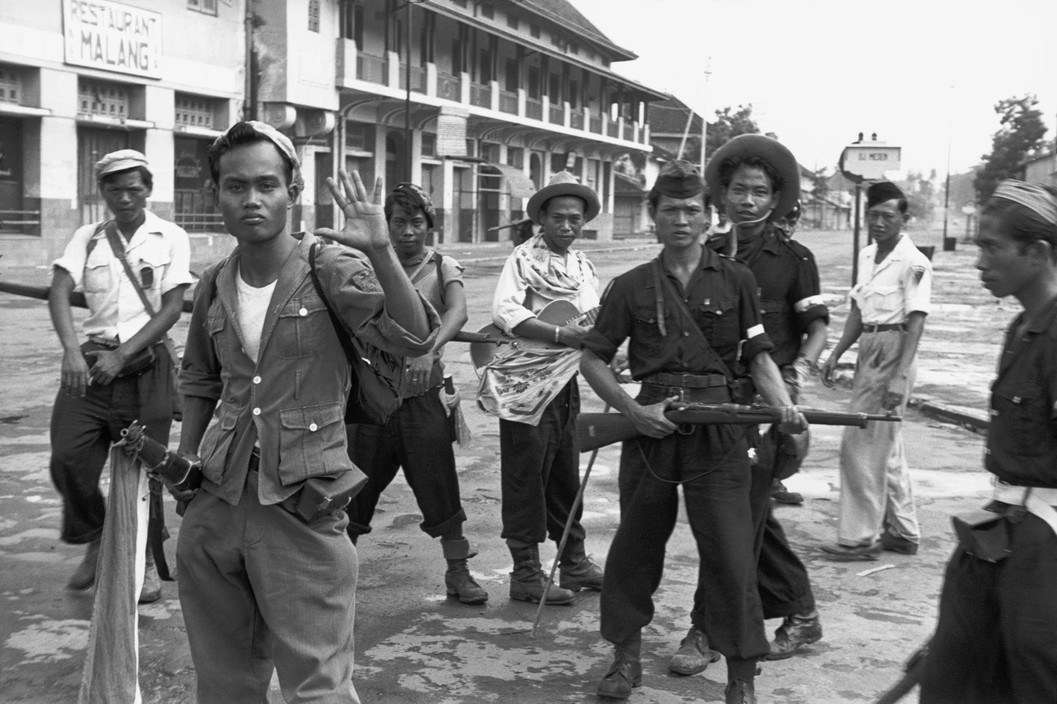 The British, with a small advance party of Dutch, reached Surabaya in October and found the city in arms. Conflict broke out on 27 October when the British General Mallaby was killed, and as negotiations broke down, British forces moved to a full-scale attack.

In the early morning of 10 November 1945, British 5th Indian Division troops — mostly Sikhs and Gurkhas — began their advance into Surabaya under the cover of naval and air bombardment. Although over 30,000 British troops were sent in over three weeks, they were forced to fight street by street as over 100,000 Indonesian nationalist militia had rallied to defend the city alongside 20,000 regular troops.

Despite the strong and at times fanatical resistance from the Indonesians, half of the city was conquered within three days while the whole battle lasted for three weeks. Estimates of dead and wounded vary, but around 15,000 Indonesians died while the British had around 600 casualties. 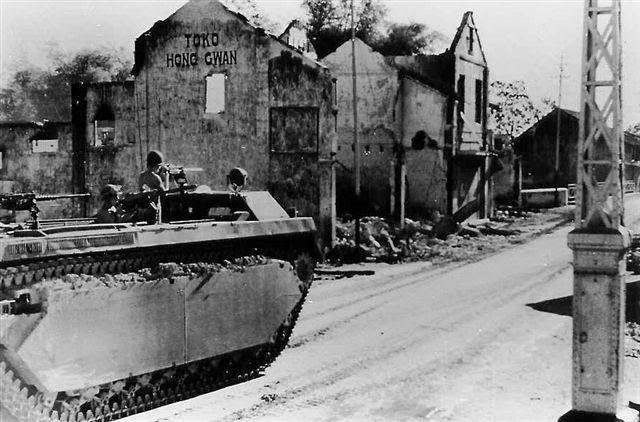 Both Australian and Indonesian commemorations of Anzac Day and Heroes’ Day hold much more symbolism and mythology than the remembrance of war dead. From the defeat at Surabaya, the fledgling Indonesian nationalist movement proved to the British and the world that they would not accept the return of the Dutch colonial government after World War II. At Surabaya, like the Anzacs on the beaches and cliff faces at Gallipoli, thousands of young men were slaughtered, often in heroic but unwinnable charges against superior positions.

While the Anzacs are commonly upheld as untried troops who through sheer determination kept up an unwinnable fight against entrenched Turkish positions, Surabaya is upheld as a battle of unequals. The well-equipped and trained British forces were fighting hastily formed militia with few weapons — a battle commonly seen in Indonesian commemorative statues and ephemera as a ‘brutal repression’ of the ‘freedom fighters’. 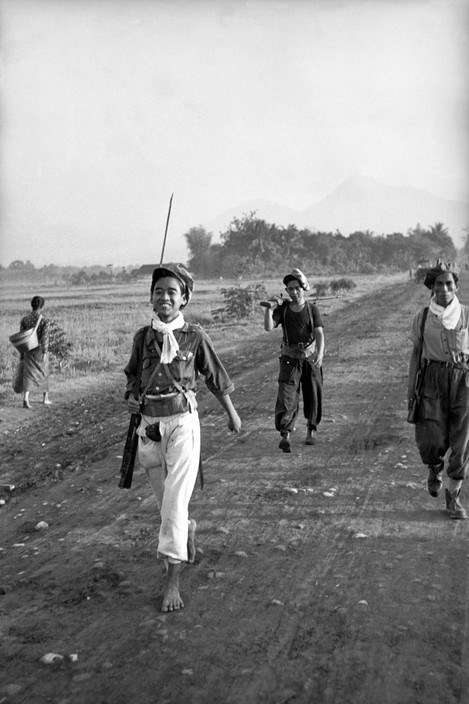 A young guerrilla fighter in 1949. Tropenmuseum, part of the National Museum of World Cultures

Like Anzac Day here, Heroes’ Day has been central in spawning museums, books and films (in many cases sponsored by  governments in both countries) about the war to uphold the August 17 declaration of independence from the Dutch. Surabaya came, after some jostling by early nationalist leaders, to symbolically stand for the wider struggle that lasted four years until the Dutch recognised Indonesian independence in late 1949. Much of the rest of the conflict was guerrilla warfare – not as easily commemorated in a national ‘moment’.

Much of the organic resonance of Surabaya in Indonesian public memory and popular culture has a lot to do with how — like the Anzacs — young men were ‘cut down in their prime’. In Indonesia, they were very young men. Many of the irregular Pemuda units were actually formed with the names of the high schools they were recruited from. The word pemuda literally means ‘youth’. 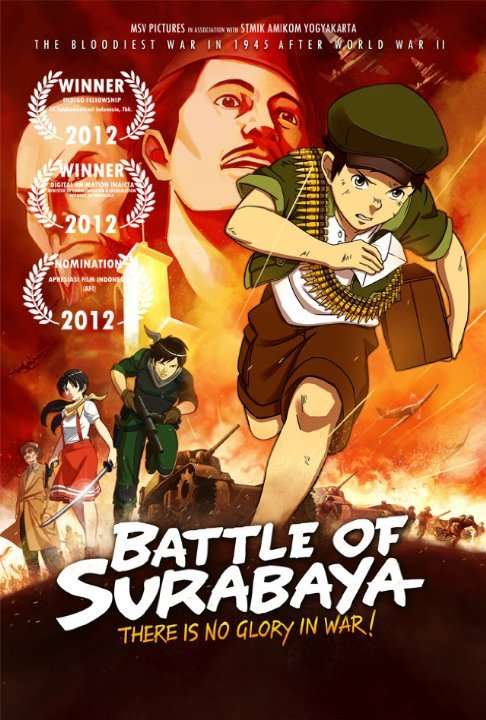 Poster for the 2D film Battle of Surabaya.

In August 2015 an animated movie – designed for younger audiences seen as increasingly distanced from the historical events – was released; Battle of Surabaya – there is no glory in war. The anime-style film follows Musa a 13-year-old shoe-shiner, who joins the Indonesian nationalist resistance against the Allied forces. During the battle, Musa becomes a courier, delivering messages to troops on the front line.

Like Anzac Day, Heroes’ Day is somewhat malleable feast, constantly refining the story of national struggle. But it also offers a negotiable space for Indonesians to revisit a time where histories and politics that have been excised from national history may once more be included.

Popular history, as it continues to democratise history and move it into the hands of people interested in their pasts and away from the dominant state-sponsored realms of museums full of dioramas, puts demands on the old re-writes of history. The recent burgeoning of historical reenactments in Indonesia means that authenticity to the past becomes a central issue.

Unlike the centenary of the Anzac Campaign — which did not see a surge of interest in historical reenactment — Heroes’ Day has. It will be interesting to watch how this might re-shape the parades and pageants of Indonesian history.

The day before Independence, 300 portraits of Dutch governors were moved out of the Governor’s residence (later known as Istana Merdeka or Palace of Freedom) in Jakarta. Tropenmuseum, part of the National Museum of World Cultures

This post is part of a series related to the museum’s collaborative exhibition Black Armada which explores the Australian support for Indonesia’s declaration of independence from 17 August 1945.

Katharine E. McGregor History in uniform: Military ideology and the construction of Indonesia’s past NUS Press 2007