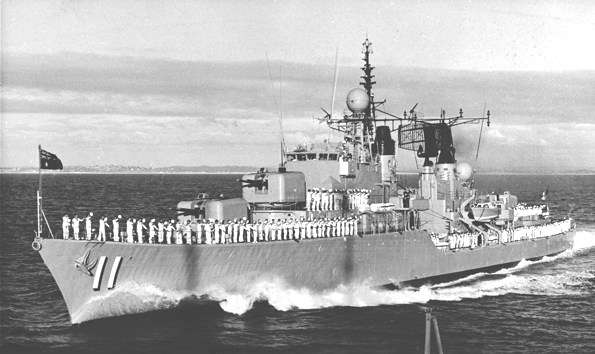 Phil McKendrick describes his experience serving on our ex-Navy destroyer HMAS Vampire. This blog post is part of a series written by sailors who served on the vessels inside our Action Stations Experience.

Here are some of my experiences on board HMAS Vampire from 1972 to 1976.
I was actually first posted to HMAS Sydney directly after my engineering course in July 1972. When we were getting prepared to take Sydney out of refit I was asked if I wanted to go to destroyers. I certainly wanted to serve on board a gun ship and volunteered.

I was sent to Vampire in September 1972 and when I joined the ship the chief stoker said, “Welcome on board” and asked me where I lived. Odd question, I thought. I told him I lived on the Central Coast and he said, “You better go and see your parents as we are deploying for 7 months on Monday.”

For the next seven months we sailed the Far East and spent Christmas in Hong Kong. Rotations for the Daring Class Destroyers (of which Vampire was one) were common and being a young 17-year-old sailor, it was a trip of a lifetime.
We visited the Philippines (four ports), Japan (four ports), Hong Kong and then, on the way home, Indonesia.

They always said ‘Join the Navy to travel’ and that sure did happen in my early days serving the Royal Australian Navy. During that time we were also dispatched to Vietnam to escort the HMAS Sydney into Vung Tau harbour.

Another exciting thing that happened was being transferred from Vampire when it was in refit at Garden Island. When Cyclone Tracey was blown away several sailors including myself were deployed to other Navy ships to assist.

It was a privilege to go and help in the clean-up of Darwin during a terrible time for the Northern Territory. Leaving Sydney by Qantas to join the ships in Townsville, I saw a lot of the refugees from Darwin arrive at Sydney and before we even boarded the plane
Nobody complained and we did our duty. I spent 3 weeks in Darwin on HMAS Brisbane assisting the shore crews in the clean-up.

Vampire was also on royal escort duties in 1973 from my recollection. The escort was for the Queen and the royal Yacht Britannia. I still have the ship’s Britannia Plaque at my place.

View all posts by ANMM Guest→
Posted in: Navy and defence , Vessels
↑