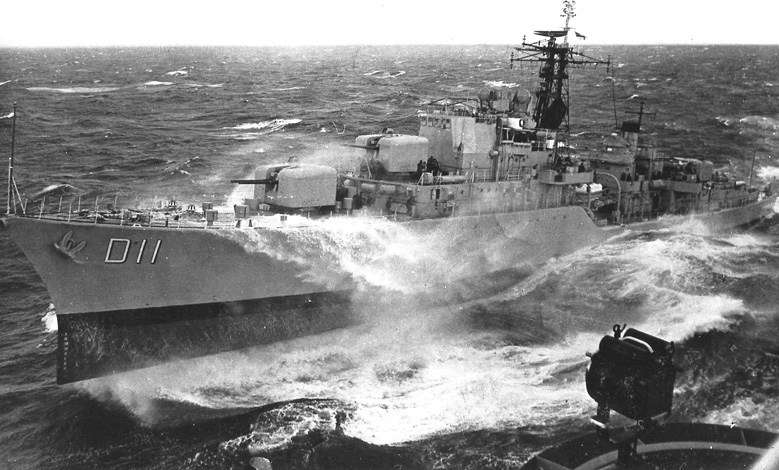 David Simpson describes his experience serving on our ex-Navy destroyer HMAS Vampire. This blog post is part of a series written by sailors who served on the vessels inside our Action Stations Experience.

A working destroyer is a machine like no other. These days, they still look mean and menacing: the greyhounds of the sea. They are designed to both offend and defend, and all with speed and manoeuvrability.

They are operated by kids – the average age of a crew is somewhere about 24. They are part of the front line defence of a country like Australia which is vulnerable to air and sea attack.

The old ones (pre-1980) were powered by steam turbines that took six hours to warm through and start. The boilers are huge and on the old Daring class destroyers that were the backbone of the Australian Navy in the ’60s.

There were two boiler rooms each powering two engines, one for each propeller shaft. They generated some 55,000 shaft horsepower and could push the 3000-tonne vessel through the water at 35 knots.

HMAS Vampire was sailing from Sydney on her work-up trials. She had just completed her half-life refit. The ship been modernised and completely overhauled.

The crew, too, was new and raw. New junior recruits straight from their course at HMAS Leeuwin and HMAS Cerberus. New artificers at sea for the first time since completing their four years of training at HMAS Nirimba. New captain. New first lieutenant. Untried and untested.

When a ship leaves harbour or is in some situation where extra care has to be taken, crew close up to special sea duty stations. Mine was in “A” boiler room – a place I had been many times when the ship was refitting, but never when it was actually working.

Thirty minutes before sailing, I was standing at the entrance to the air lock. The boiler room was pressurised and access was through a small chamber large enough for two people. (How does everyone get out if something goes wrong?)

I opened the first door and closed it carefully behind me. I stood inside the chamber, breathing in the heat from below.

I unclipped the “dogs” on the second door and was amazed by the suck of hot air that seemed to draw me in. I stepped over the coaming and stood on the small landing at the top of the ladders that led down into the boiler room space. I turned and shut the door.

The heat was overwhelming. I paused, trying to adjust to the heat and noise. Two deck levels down were the bottom plates of the space.

The ladders were almost vertical and I could see straight down to the cluttered deck below. The hand rails were too hot to touch, so I pulled the cuffs of my overalls down to cover my palms and began the descent.

I had been down and up these ladders many times before, but that was in the peace of the dockyard. The noise of the main turbine and the extraction fans was tremendous. The dry, hot air sucked all the moisture from my lungs.

I paused at the next landing. Huge pipes covered in asbestos lagging criss-crossed the upper levels.

I had no idea what they were for or where they went. Below me, I could see the stokers working at the boiler face, punching the sprayers that fed the furnace fuel oil into the fire that heated the water to make the steam to drive the turbine.

The water was pure and was “made” from sea water that went through an evaporator and was turned into superheated steam which, under great pressure, was used to drive the turbine. I’d heard the stories – one pinprick hole in the superheated steam line would kill everyone near it – cut through them like a knife! But sailors are good at “stirring” a neophyte, so I wasn’t quite sure if that was true.

My role at my special sea duty station was to observe the electrical controls on the turbine and to lower the pitometer log (a sword-shaped instrument that went through the hull of the ship and gave the ship’s speed through the water to all those computers that needed such information). I had no real idea of what to do or where to stand.

The petty officer of the watch was standing back from the boiler face. The telegraphs from the bridge were next to me and above me were what looked like horizontal steering wheels which he would madly spin when messages came down from the bridge.

Standing in front of the boiler were three stokers, all in overalls and boots and nothing else. (“Don’t wear jocks down there, mate. If there’s a fire, they’ll just stick to you.”)
Spider Webb, the PO of the watch, was calling weird orders to his minions. “Up one, down a half” and someone would grab the handles on the sprayers and pull them out or push them in. The intensity of the flame that could be observed through the spy holes in the boiler face would either increase or decrease.

Other orders were a little more colourful and sexually explicit. Stokers are a different breed. They spend their lives working four-hour watches in a place resembling any hell you’d like to name. They love tattoos that represent pumas and daggers and “Death before Dishonour” and little swallows and cherries proclaiming
“Here’s mine – Where’s yours?” They drink and fight and other things when they are ashore and they live in a special mess down aft where no one else goes.
I watched, in awe? Aghast? Horrified? Scared?

At last the ship began to move. My first time at sea and I was below the waterline in some sort of crazed environment over which I had no control. I knew Spider – he’d been to the pub with me a few times. He was my boss’s mate. I got close enough to him to scream in his ear. “Where do I go?”

Spider’s eyes didn’t leave the pressure gauges he was watching so carefully. “Sit over there.” He pointed vaguely to the two steps that led up to the turbine control panel. I dodged the sweating stokers and went and sat where I was told.

The steel deck plates were strangely cool. I had time to adjust my senses to what was going on around me. The chaos did have order. I began to see the connection between the orders from the bridge and how Spider manipulated his handles and levers and men.

I began to separate things. The main noise came from the fans. Spider stood underneath the main fan outlet which blew fresh air into the space. The turbine behind me screamed. The background noise was the roar of the furnace.
These sounds were the root notes of the chord. The melody was the shouted orders and responses; all orders were repeated. Spider repeated the bridge’s, the stokers repeated Spider’s. The energy was intense.

The only person idle was me. I sat, waiting for my call. It came soon enough.
“Lower the pitometer log,” came the order from the bridge. “Lower the pitometer log,”
Spider screamed at me. I got up and went to where the metal tube (“It’s more like a sword than a log,” was the incongruous thought that flashed through my mind) rose a metre above the watertight gland that went through the ship’s hull.

I pushed it down through the gland until it was almost home in its housing. The last 10 centimetres required me to stand on it, kick it, and ram it home. I was in a flurry of panic. How long did I have before someone yelled at me? One last kick – which left my heel bruised for weeks – and it was home.

“Pitometer log lowered,” I bawled in Spider’s ear. “No need to shout, mate,” Spider yelled back. “Now go and sit down. And keep out of the way.” Gratefully, I went back to my step and sat down.

At last the ship began to move. My first time at sea and I was below the waterline in some sort of crazed environment over which I had no control.

The ship was moving down through Sydney harbour. It must have been a beautiful sight for everyone on the upper deck. This isn’t so bad, I thought. I can handle this. I was watching the boiler face, when I noticed water slopping around in the bilges under the bottom plates. It reflected the glow of flames and was a mixture of water, oil and the cleaning fluid the stokers used to keep the decks clean.

Turco it was called and its pungent odour permeated the whole space, mixing with the smell of hot steel and steam to formulate a unique, unmistakable odour, memories of which would stay with me forever.

The fluid in the bilges started to move rhythmically. As I noticed this, I became aware that the hip, too, was moving. I had, until now, had little sense of movement because there was no chance of my seeing anything to show the relativity that indicates forward or reverse motion.

My sea time up to this point in my life had been a few trips to Manly on the ferry. Seasick – never. Until now. I watched the partly digested fried eggs and cereal of breakfast rising and falling on the surface of the bilge water. I listened miserably to the jeers and derision of my shipmates.

The romance of the sea …

View all posts by Guest→
Posted in: Navy and defence , Vessels
↑