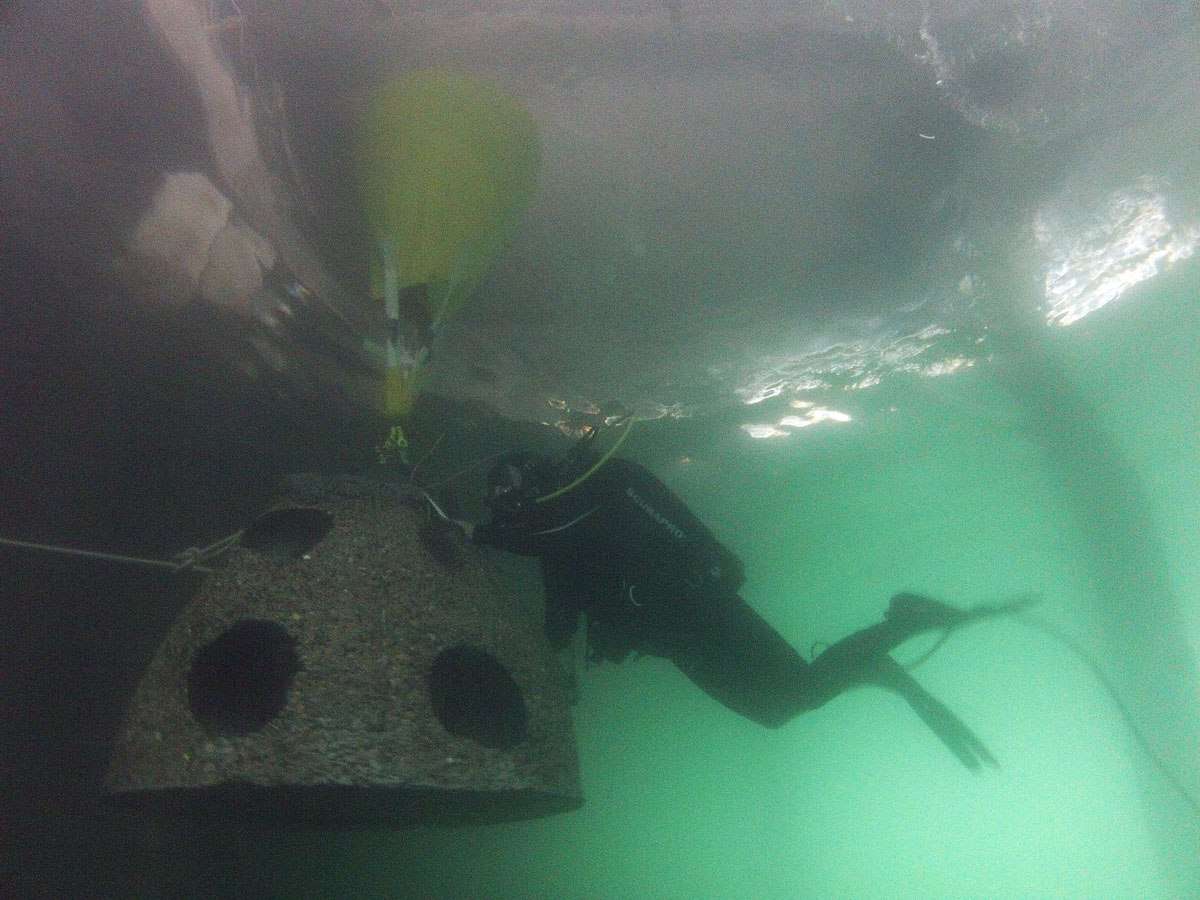 Next time you visit the Australian National Maritime Museum, make sure you take a peek under the north wharf for a glimpse of our new artificial reef. Last week we installed a series of six Reef Balls® — purpose-built artificial reef habitats for sea creatures donated by the NSW Department of Primary Industries. They’re actually half-balls (hemispheres) and are hollow, with several small holes that provide shelter for fish and invertebrates. They’re made of concrete with a special additive that strengthens them, while lowering the pH to encourage the settlement and growth of marine organisms. 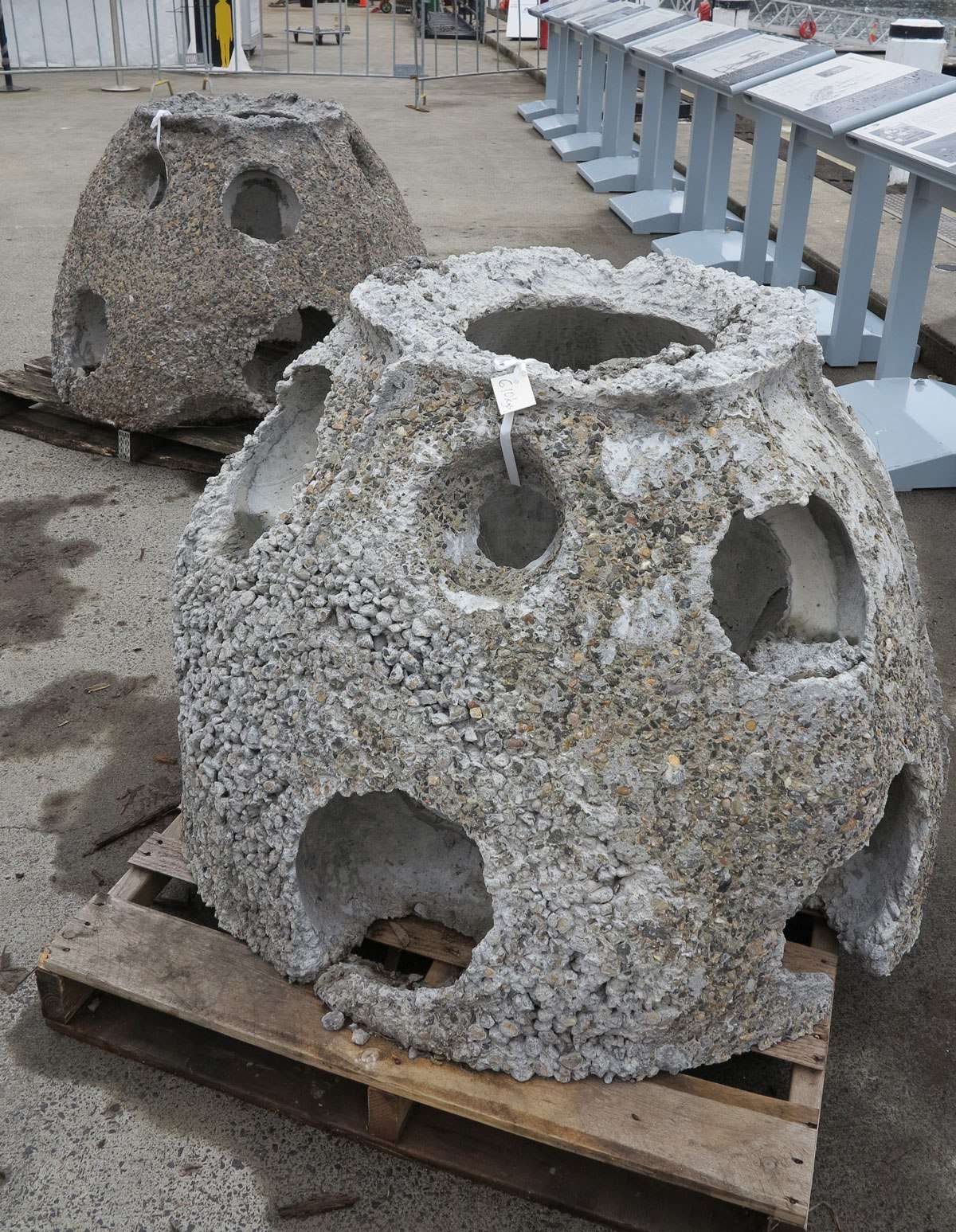 Installation took approximately one-and-a-half hours, and involved expertise from around the museum. Lee Graham (Fleet Shipwright) and James Hunter (Curator, Royal Australian Navy Maritime Archaeology) suited up in their dive gear and managed movement and placement of the Reef Balls once they were lowered into the water. 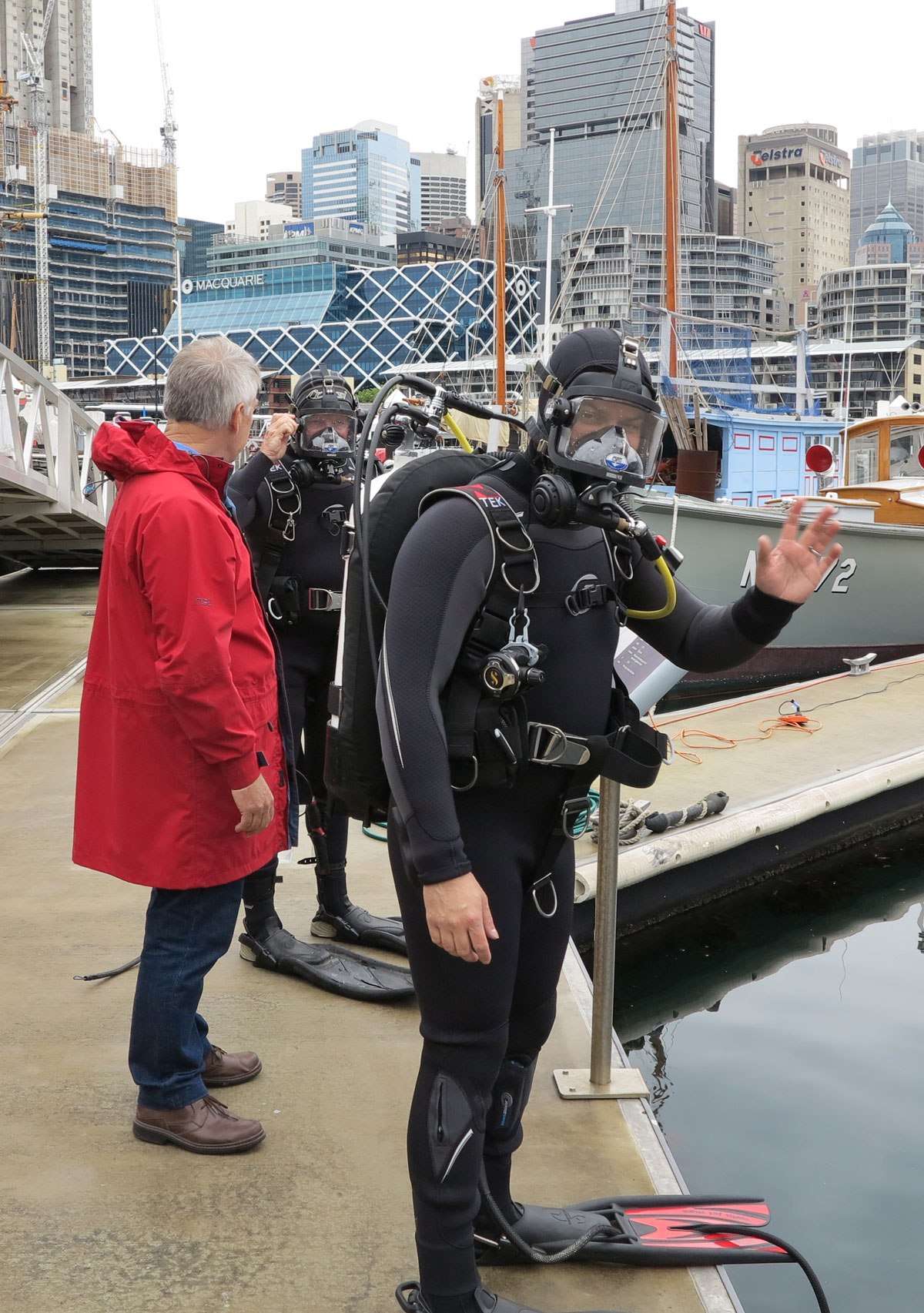 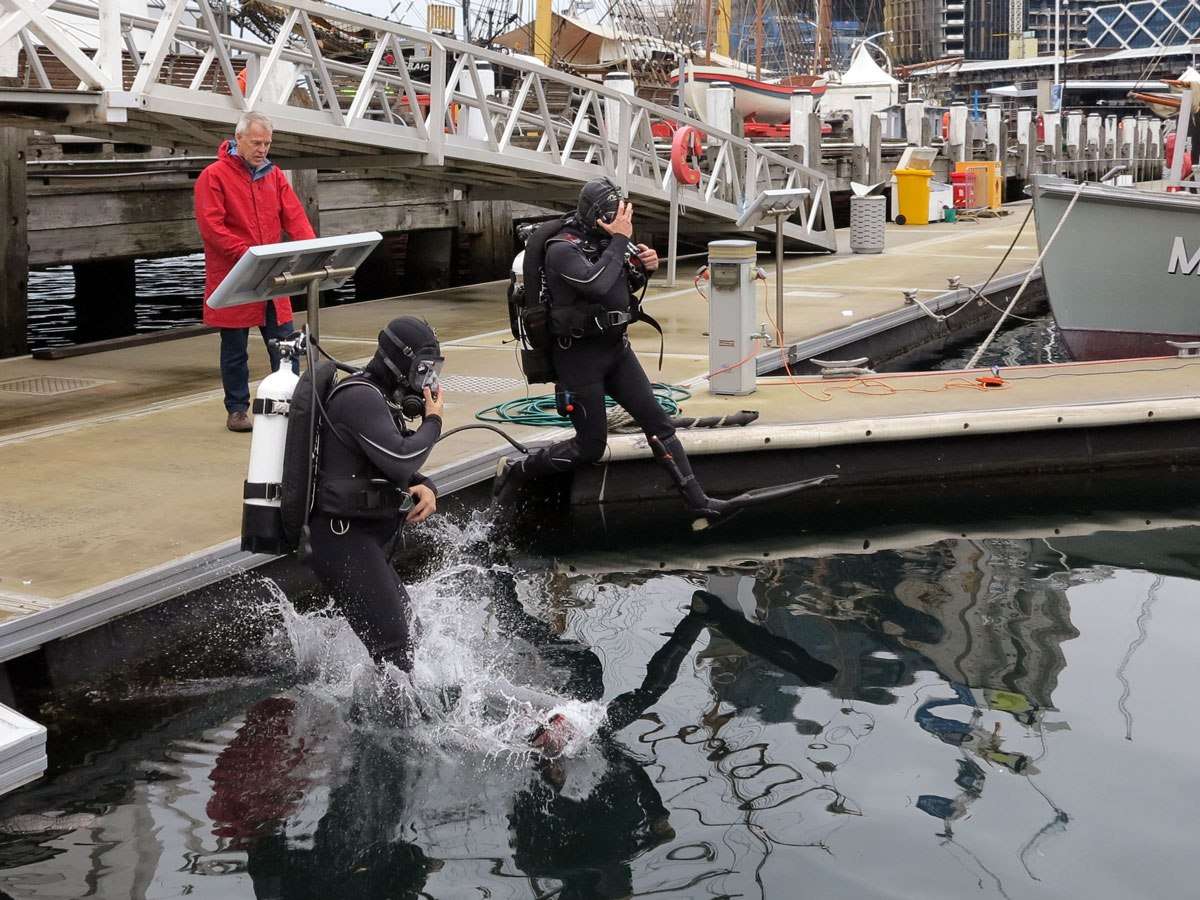 Both divers wore full-face masks with communications equipment that enabled them to maintain contact with one another, as well as those working on the surface. The ability to communicate effectively was critical, as each Reef Ball weighs approximately 600 kilograms, and had to be lifted and transported to the edge of the wharf, where they were carefully lowered—one at a time—over the side and into the basin. Cameron Mclean (Registrar) and Thomas Wilke (Lighting Technician) were responsible for attaching a system of slings to each Reef Ball and then transporting it to the edge of the wharf with a forklift. Nigel Erskine (Head of Research) and Kieran Hosty (Manager of Maritime Archaeology) acted as diving supervisors and relayed information and instructions between the dive team and surface team. 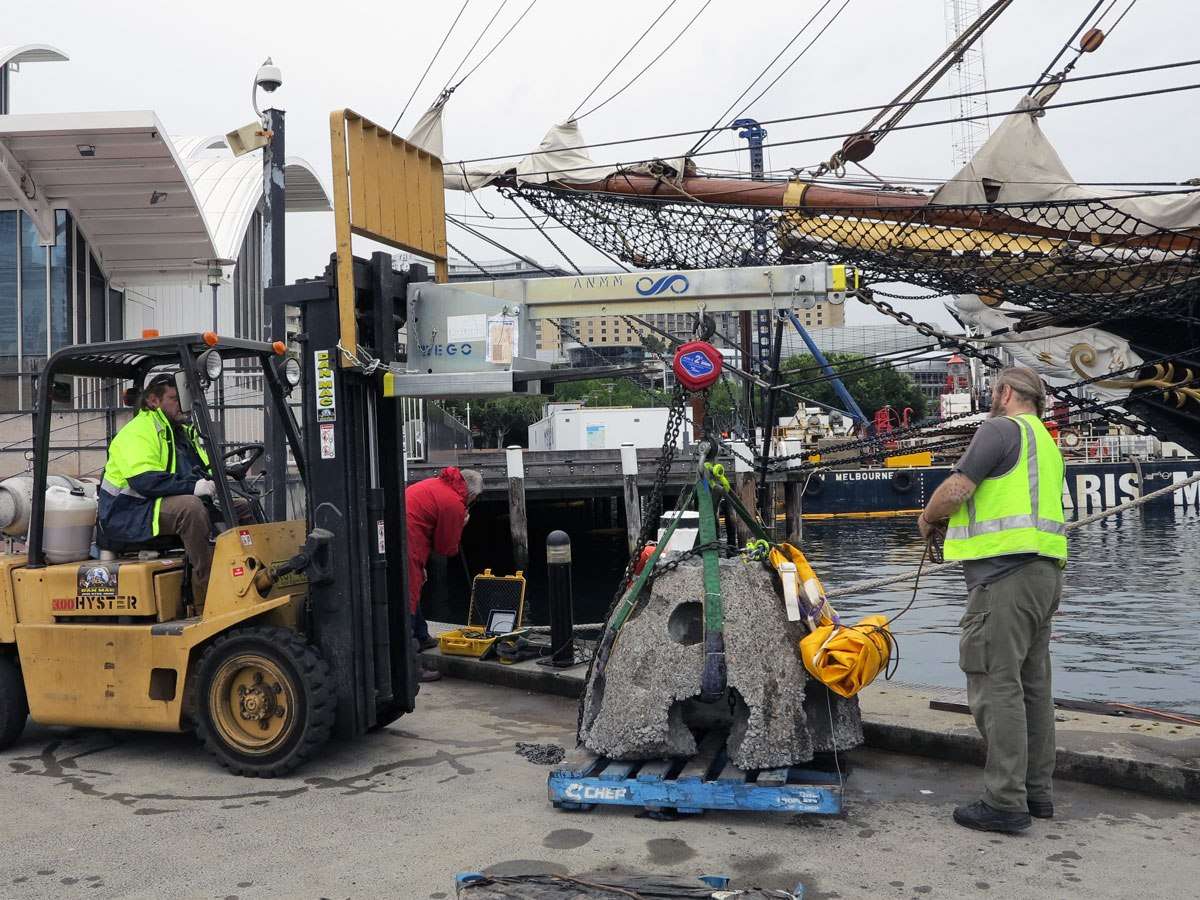 Cameron McLean and Thomas Wilke attaching a system of slings to one of the Reef Balls. Photo: Michelle Mortimer 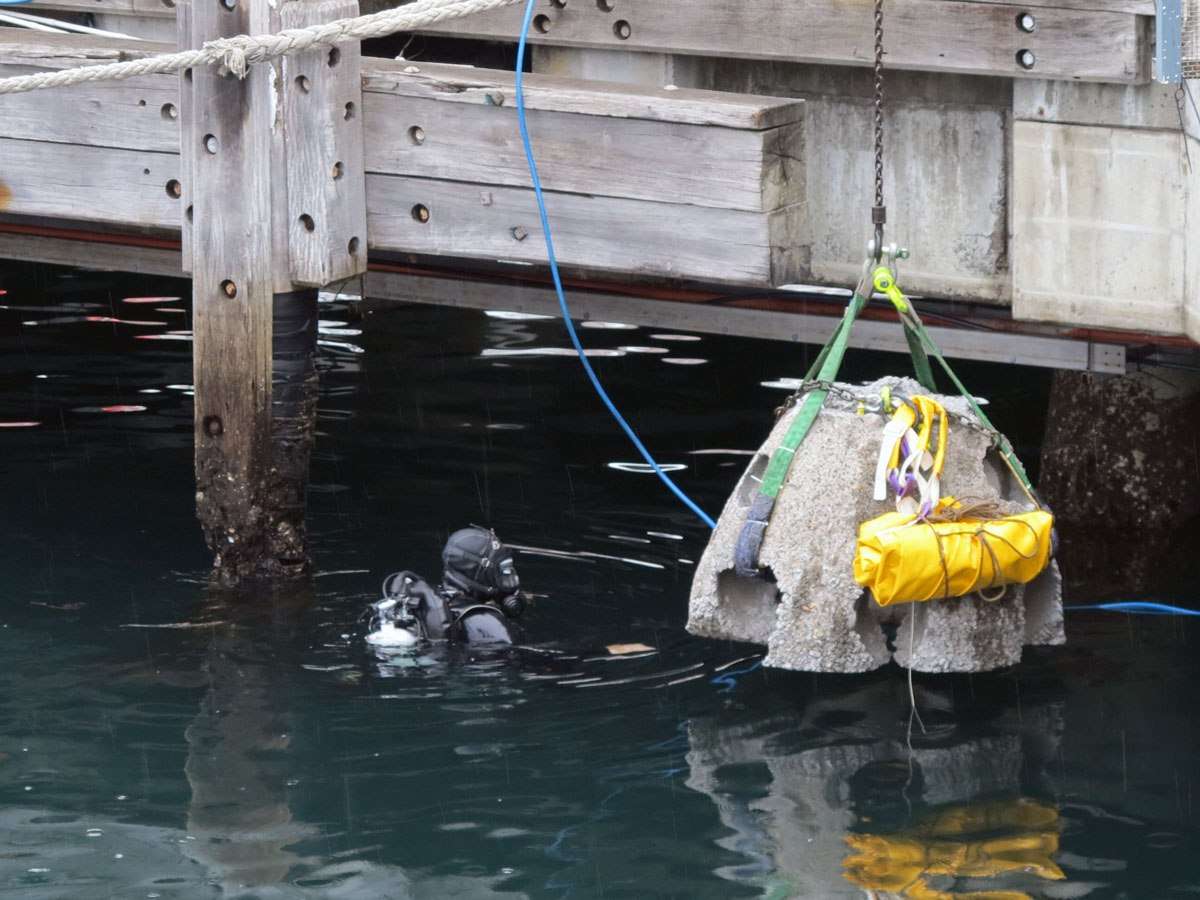 The Reef Ball, with inflatable lift bag, is lowered into the water where James and Lee wait. Photo: Michelle Mortimer 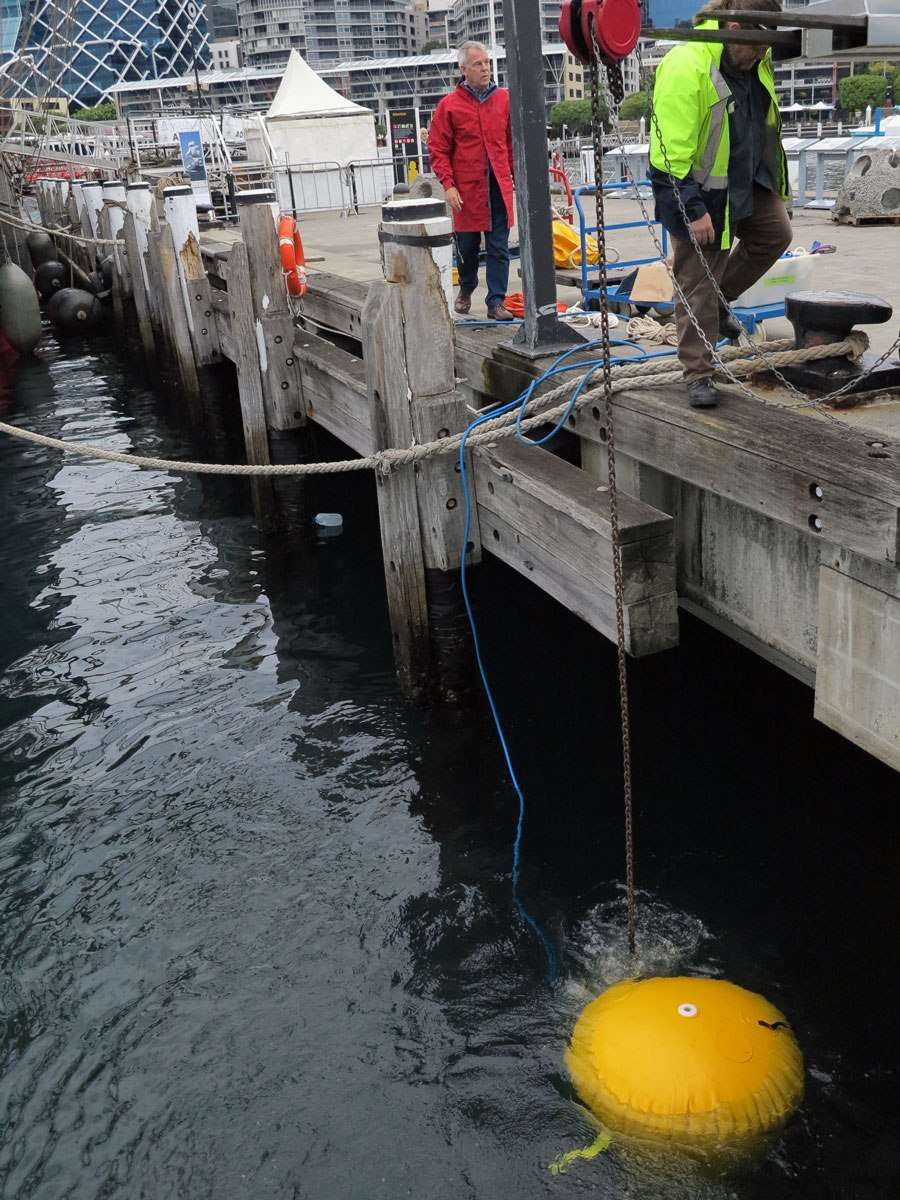 Once in the water, each Reef Ball was further lowered to a depth of approximately two metres, where Lee and James attached a large lift bag and ‘inflated’ it by pumping compressed air into its base. As the lift bag filled and expanded, it took the weight off of the slings attached to the forklift, enabling Lee and James to transfer the Reef Ball from one hoisting system to another.

A towline was then attached to the lift bag, and staff and volunteers on the surface—with assistance from the divers—moved each suspended habitat beneath the wharf to a spot on the other side adjacent to the floating pontoon. At this point the divers moved the Reef Ball into its final position and gradually deflated the lift bag until the ball settled on the seabed. Ultimately, all six habitats were arranged in two clusters of three. The two clusters are located a short distance from one another and will be visible from the pontoon, depending on tidal conditions and water visibility. 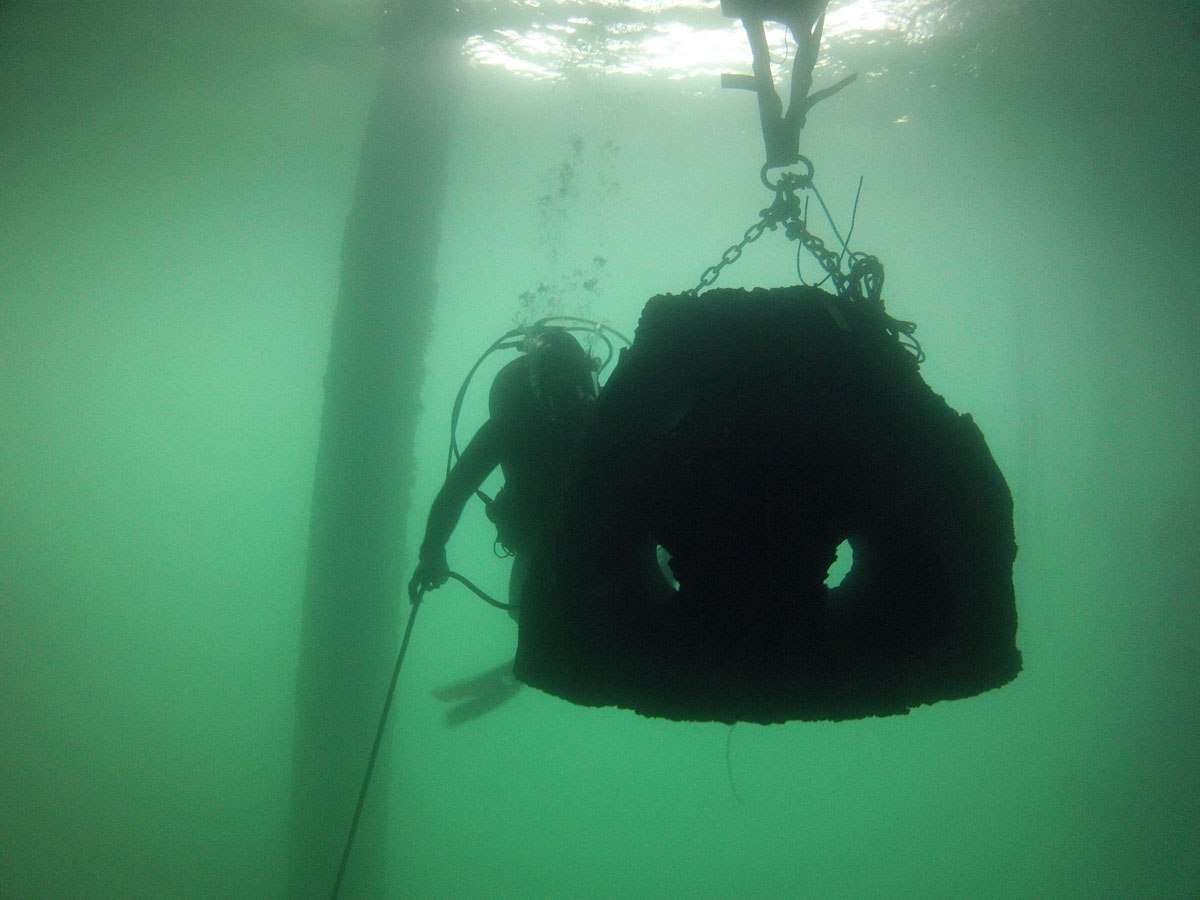 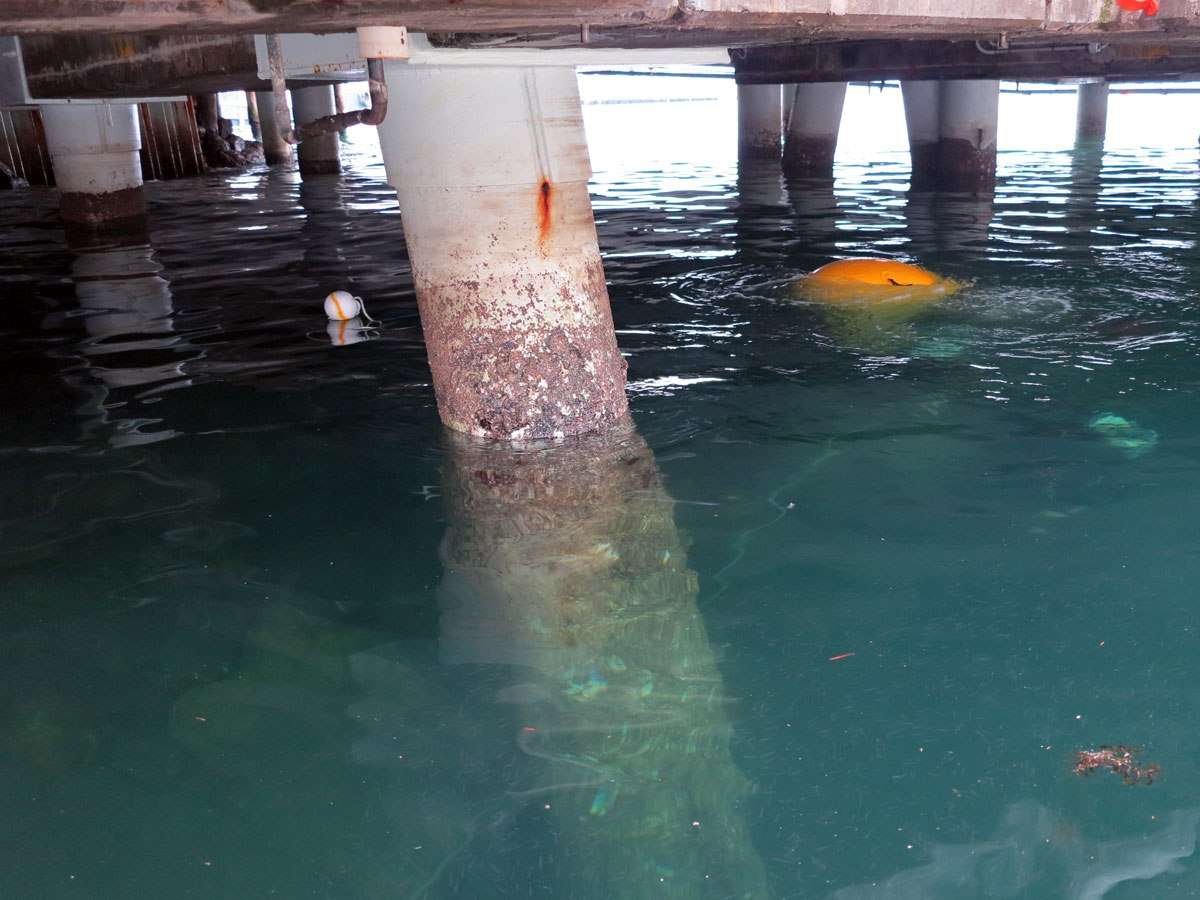 The yellow lift bag is visible on the water surface underneath the museum’s north wharf. Photo: Michelle Mortimer 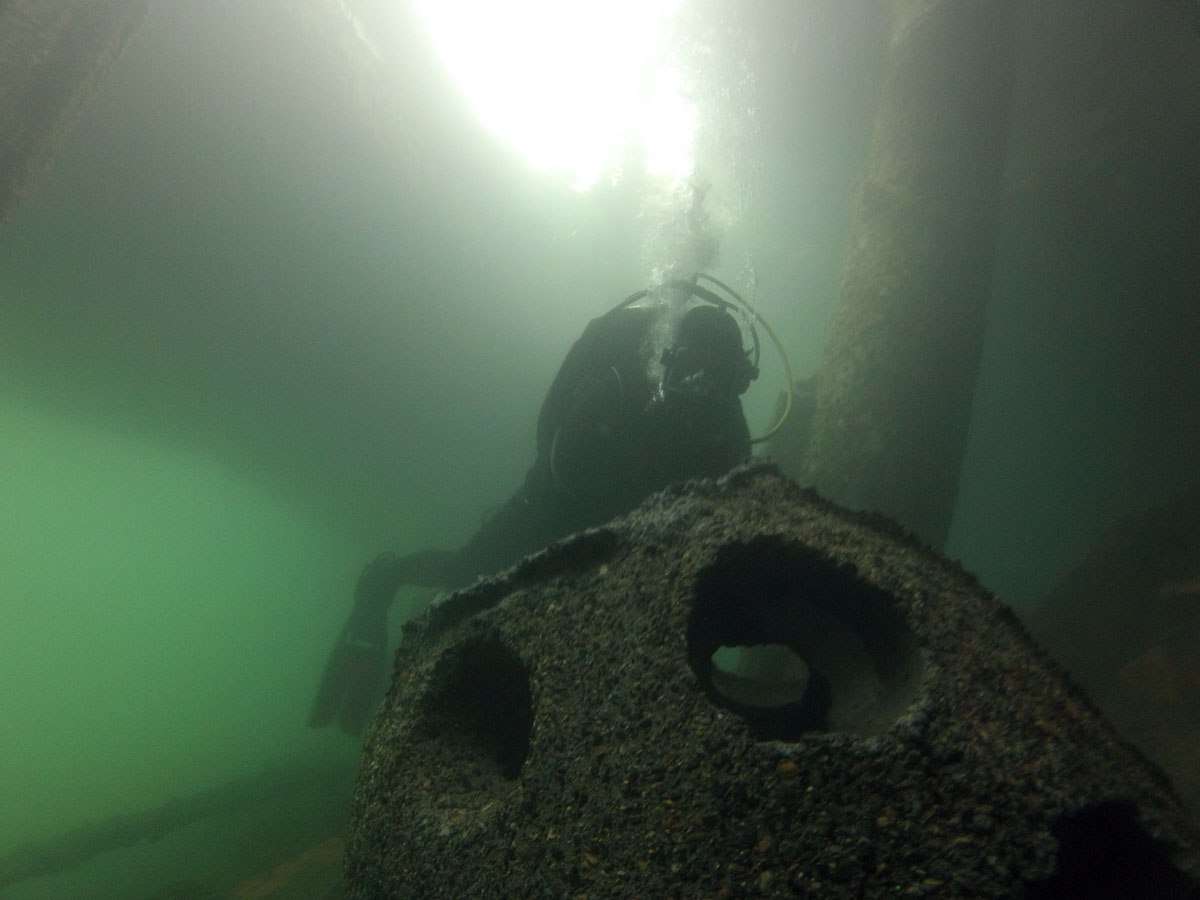 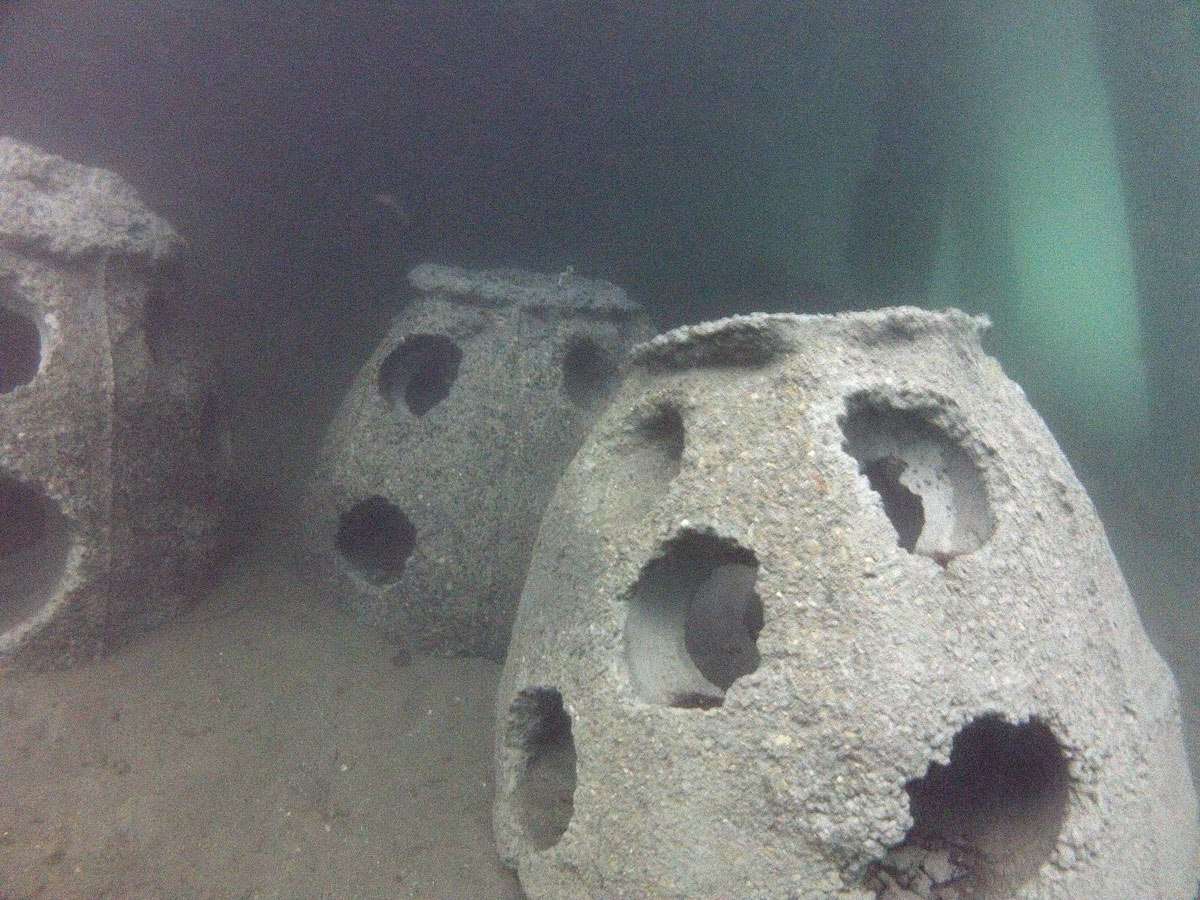 A cluster of Reef Balls under the museum’s north wharf. Photo: Lee Graham.

Over 500,000 Reef Balls have been deployed worldwide, to create new habitats and regenerate damaged ecosystems. Since 2005, the NSW State Government has used Reef Balls and other technologies to create several recreational fishing reefs (also known as artificial reefs) to enhance fishing opportunities. They provide new locations for fishing and more habitat for fish, algae and crustaceans.

Head to the Fisheries NSW website for more information on other reefs built by the NSW Government using funds from the Recreational Fishing Trust, including GPS coordinates for reef locations.

View all posts by James Hunter→
Posted in: Oceanography
↑