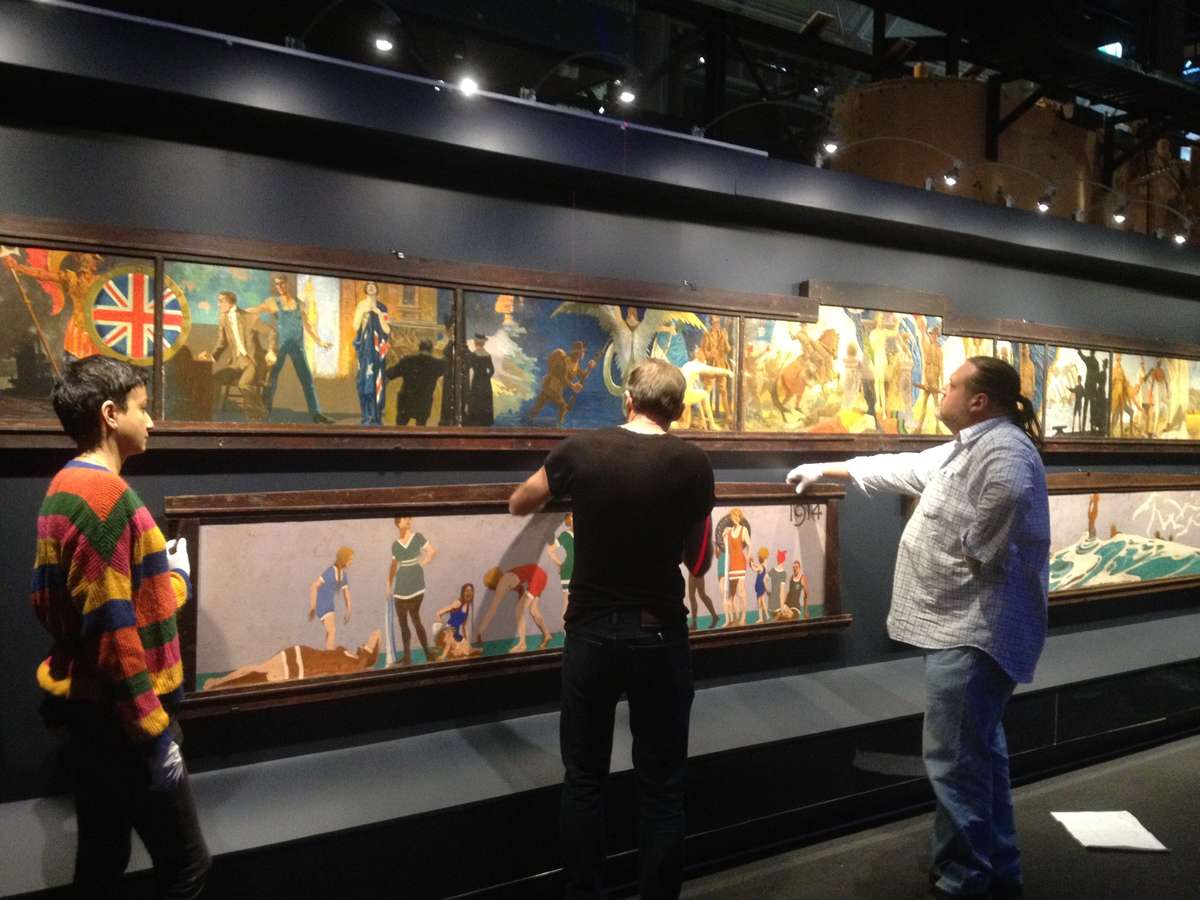 Installing the murals in the Navy gallery, March 2015

A few weeks ago we installed a series of murals in the museum that were painted by David Henry Souter for the Bondi Surf Bathers’ Lifesaving Club (BSBLC). In January 1921 a ceremony was held to unveil an honour roll listing the names of the club members who had served during World War I and died far from their beloved Bondi. Also unveiled that day was this series of murals. The local sporting gazette The Arrow reported on the unveiling and made brief mention of the paintings:

The interior of the clubhouse is now distinctly attractive. The walls are panelled and Bulletin artist Souter has supplied a series of friezes done in his own inimitable style. (21 January 1921, p.6)

Souter (BSBLC President, 1920–21 season) completed the series in 1934 when he painted an additional two works.

In 1921 the large public war memorials in Australian capital cities were yet to be built, but honour rolls and boards commemorating the war service of Australians were becoming increasingly common in workplaces, local schools and clubs. Souter’s allegorical paintings were anything but commonplace. The first and largest panel in the series is more than six metres in length and features an Australian youth answering the call to war. He then wades ashore at Gallipoli, is watched over by the angel of death. Another soldier is poised to defend France. Through the sacrifice of war, the Anzac is transformed from soldier to saviour. He returns home a hero on a dazzle-painted ship and is welcomed by family and friends. In the last section of the panel, Anzacs and bush pioneers stand ready to forge a new nationhood.

There is no doubt the murals present an idealised view of the soldiers – there is no hint of the shell shock, injuries or trauma that resulted from war service. The returning soldiers are shown as muscular heroes, ready to work the land with axe and anvil at hand.

The next two murals depict mermen wearing lifesaving caps watching over mermaids in the ocean. Bondi Beach in 1914 is populated solely by female swimmers, with the exception of a sole disabled male beach-goer who is presumably ineligible for war service. In the final painting, the heroic lifesaver observes the carnival of life on a packed Bondi Beach in 1934. The Chief Beach Inspector, Stan Macdonald, stands next to a surf-reel, a device that was invented at Bondi and used for many years by surf lifesaving clubs throughout Australia during parades, drills and surf rescues. The throng includes individuals, family groups, a bickering couple and sunbathers resplendent in the latest swimwear with their beach toys, balls and a surfoplane, a rubberised mat invented in nearby Bronte and popular in the 1930s. Overhead flies an aeroplane representing the modernity of Australian life.

The artist David Henry Souter was born in Aberdeen, Scotland. He travelled to South Africa in 1881 and married there in 1885, he went on to spending some time in Melbourne. He moved to Sydney around 1887 at the age of 24. He was well known in Sydney and was one of the founding members, and later President, of the Art Society of New South Wales. Souter produced a diverse range of artistic and literary works.  He painted many works in a classical revivalist style much like his contemporary Norman Lindsey, yet he also designed theatrical sets and wrote and illustrated comic strips, books and poems. His illustrations appeared in every edition of The Bulletin newspaper (colloquially known as the Bushman’s Bible) from 1892 onwards for a period of 40 years. Hundreds of his works are held in the Mitchell Library and we hold this recruitment poster in our collection. 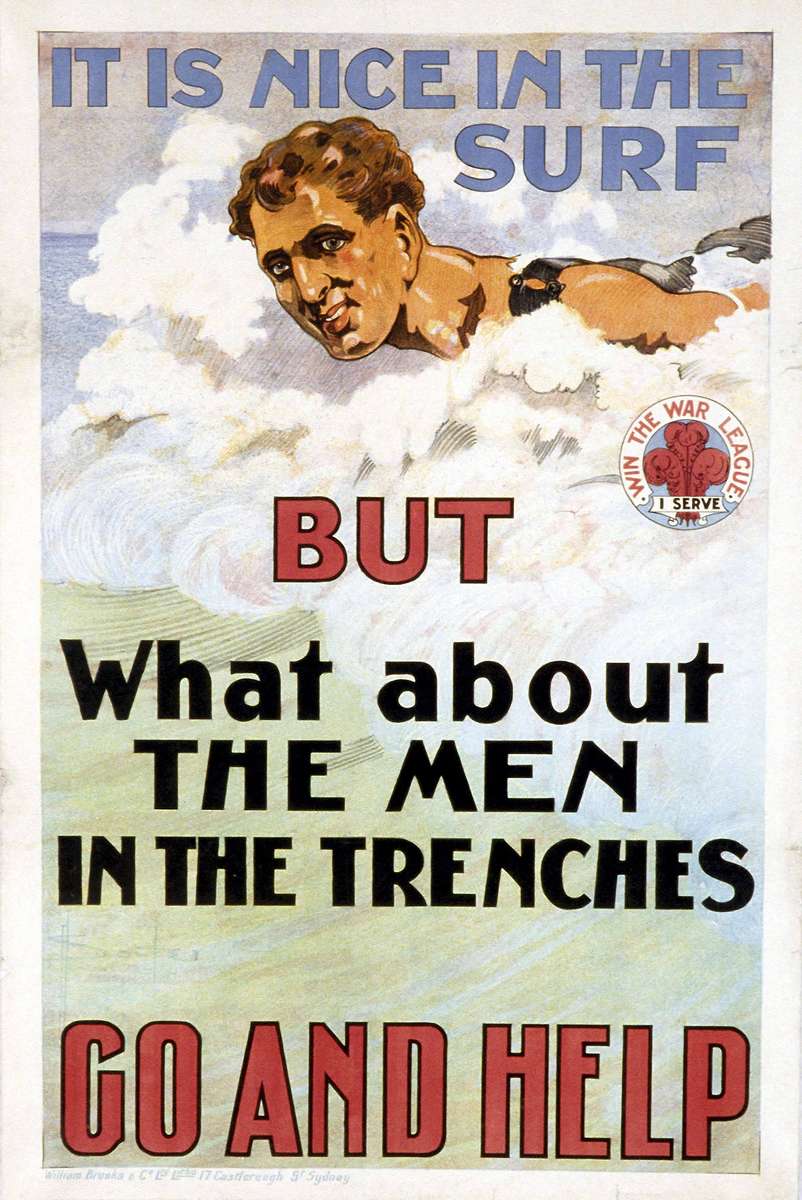 A World War I poster designed by D H Souter in 1915 to promote surf-loving laggards to volunteer for war service. ANMM Collection

From my perspective, what makes these colourful paintings so historically valuable is their uniqueness. The series presents the lifesaver as an ideal of Australian manhood, sharing the values and attributes of the Anzacs. He is physically strong, courageous, willing to make extraordinary sacrifices for others and has a love of surf bathing. The lifesaver is positioned as an heir to the traditions of the Anzac and the Australian bushman.

Whether you agree that there is a symbolic connection between the Anzacs and surf lifesavers is a matter of personal opinion. However, I hope visitors appreciate that David Henry Souter successfully painted a symbolic, idealistic and distinctly Australian story about the effect of war upon the BSBLC and the emergence of the surf lifesaver as a national icon.

See the murals on display in the Australian National Maritime Museum’s Navy gallery.

View all posts by Michelle Linder→
Posted in: From the collection , Arts and Culture , Navy and defence
↑