The mystery surrounding Sir John Franklin’s 1845 expedition in search of the Northwest Passage has been a part of Canada’s identity for nearly 170 years. A lecture at the University of Sydney last Friday gave many engrossing insights into the story, and can be viewed online.

Franklin’s party of two ships and 129 men disappeared without trace in their quest to find the Northwest Passage, setting in train a series of unsuccessful rescue missions that would claim many more ships and lives. Last year, the wreck of HMS Erebus, one of Franklin’s lost vessels, was finally discovered 11 metres under water in the north of Canada. 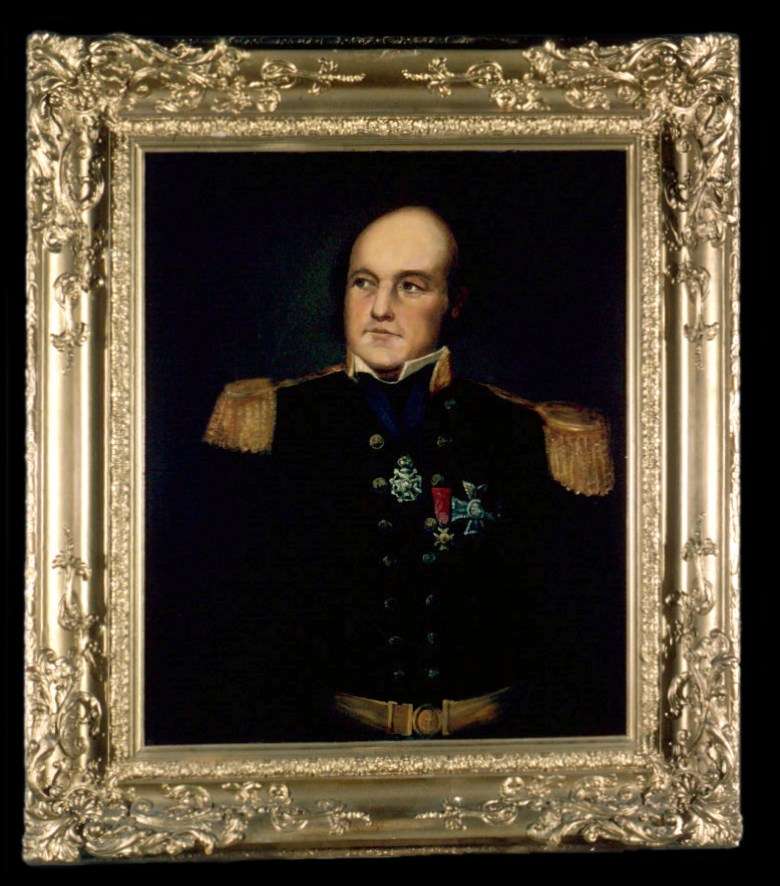 Portrait of Sir John Franklin, possibly after an original pastel by Joseph Mathias Negelen 1792-1870. The portrait was once in the possession of Lady Franklin, wife of Sir John. Oil on canvas, gilt frame (not the original frame). ANMM Collection

Professor Erika Behrisch Elce, of the Royal Military College of Canada, gave a profile of Lady Franklin, who was the impetus behind the search for the expedition. Described as ‘erudite and thoughtful’, Lady Franklin had travelled extensively with her family, and after her marriage she continued to travel with her husband. One journey took the couple to Van Diemen’s Land (now Tasmania), where Franklin was governor from 1837 to 1843.

By then, Franklin was a seasoned polar explorer. He became known as ‘the man who ate his boots’ after his first expedition from 1819 to 1821, in which 11 of the 20 expeditioners died. He led another expedition from 1825 to 1828, after which he received a knighthood and married Lady Franklin. On his third expedition, in 1845, his luck ran out.

When months then years passed, yet the expedition failed to return, tenacious Lady Franklin took on the most powerful men of the Victorian age – politicians, aristocrats and the Admiralty – and campaigned tirelessly for their help in finding her husband and his men. She wrote many long letters to enlist aid and attracted a band of devoted gentlemen followers who took her orders in the search at sea and also advocated for her back on land. She was disinherited by her father, who feared she would spend all the family’s money on a futile quest.

Over the years, 39 ships were sent on recovery missions, with 15 ships being dispatched in 1850 alone. In 1854, the first news of the expedition came via Dr John Rae, who told the Admiralty of Inuit reports that some 40 white men had starved and cannibalised their comrades. In 1861, a tiny expedition organised by Lady Franklin herself found the only written evidence of the expedition’s fate – an account of the party’s last days and, in June 1847, Franklin’s death.

The next chapter of this tale was related by Captain Bill Noon of the Canadian Coast Guard, who took part in the painstaking search for evidence of the Franklin expedition, centering around King William Island. Ship artefacts and human remains are widely scattered along the northern part of the island, while in the southern part, evidence comes in the form of Inuit testimony. Parks Canada focused on these two areas, literally going into uncharted territory, as parts of the area had still not been surveyed in 2008, when the first of the recent searches began.

Although the weather allowed only one or two weeks of searching per year, the team soon developed ‘Franklin fever’. More and more supporters joined the search, contributing sophisticated technology such as sidescan sonar and an autonomous underwater vehicle.

Searching sounds romantic and exciting, Captain Noon said, but the reality is so boring that the team calls it ‘mowing the lawn’. The really interesting part each year is the land-based archaeology, which turns up such items as Inuit tent rings, ship fastenings, musket balls, items of clothing, and stone cairns marking human remains. Again, only a few days can be spent ashore each year.

In 2014, back at sea, a huge piece of the puzzle slotted into place when the sidescan sonar registered the image of a ship. A remote-operated vehicle was then sent down, enabling a positive identification of HMS Erebus. After a public announcement and celebrations in the Inuit community, Parks Canada had just a day to dive the wreck before the weather turned. They found it in excellent condition – free of borers (which do not survive Arctic waters) and with all metals well preserved. Franklin’s cabin is visible through a gap in the deck, and the ship’s bell was found, its Admiralty broad arrow and date ‘1845’ both still easily legible. The bell is the only artefact that has been recovered from the wreck, and is now under conservation.

Research on Erebus will continue in future years, along with searches for the second ship, Terror.

The Franklin Discovery Lecture was presented by the High Commission of Canada in Canberra, as part of their Canada Down Under Days, in Hobart, Canberra and Sydney. To view webcasts of the complete lecture, click here for Sydney and here for Canberra.

The June issue of the museum’s magazine Signals (number 111) will carry a feature article on the Franklin expedition and the discovery of the Erebus.

View all posts by Janine Flew→
Posted in: Maritime Archaeology
↑