This week I was privileged to be on board one of the vakas visiting the museum as they sailed into Sydney Harbour at the end of a 2 month, 6,000 kilometre voyage across the Pacific Ocean. 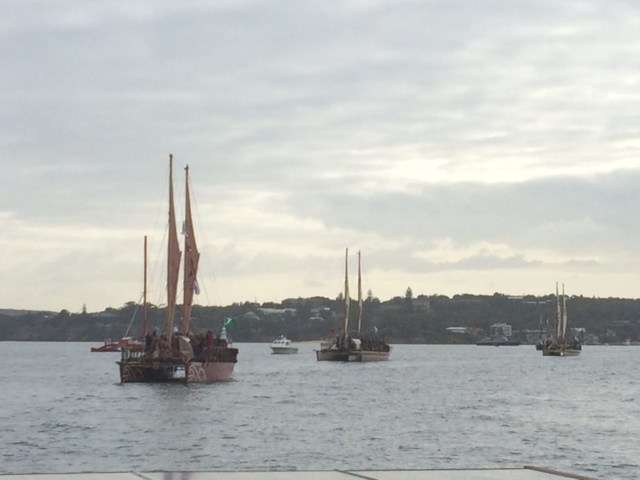 What an experience. These majestic double hulled sailing canoes are amazing craft, able to hoot along at 23 knots and plough through a six-metre swell. 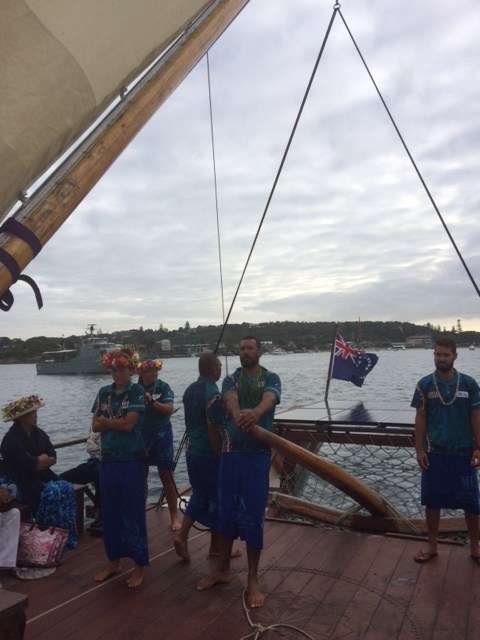 Below the Cook Islands flag is a bank of solar panels. The museum’s patrol boat HMAS Advance sits off Watsons Bay in Sydney Harbour, ready for escort duty.

At sunrise on Wednesday, a flotilla of museum vessels including the pearling lugger John Louis, HMAS Advance and MB 172 transported dignitaries and media out to the vakas that had overnighted at Watsons Bay. I was on board the lead vessel—Marumaru Atua from the Cook Islands. Unfortunately a grey, overcast and decidedly chilly day saw a slight westerly head wind which made travelling only under sail a little difficult. No mind; the vakas have a bank of solar panels on a platform off the stern that runs a quite noiseless electric motor.

The platform that stretches across the two hulls makes an open and easy-to-work deck. As the vessels are reconstructions of traditional vakas, the hulls are made of modern materials and each has surprisingly roomy quarters for the 16 crew Marumaru Atua can accommodate. The cabin on deck is the control centre—not what would be very cramped living quarters (as one bystander thought)! 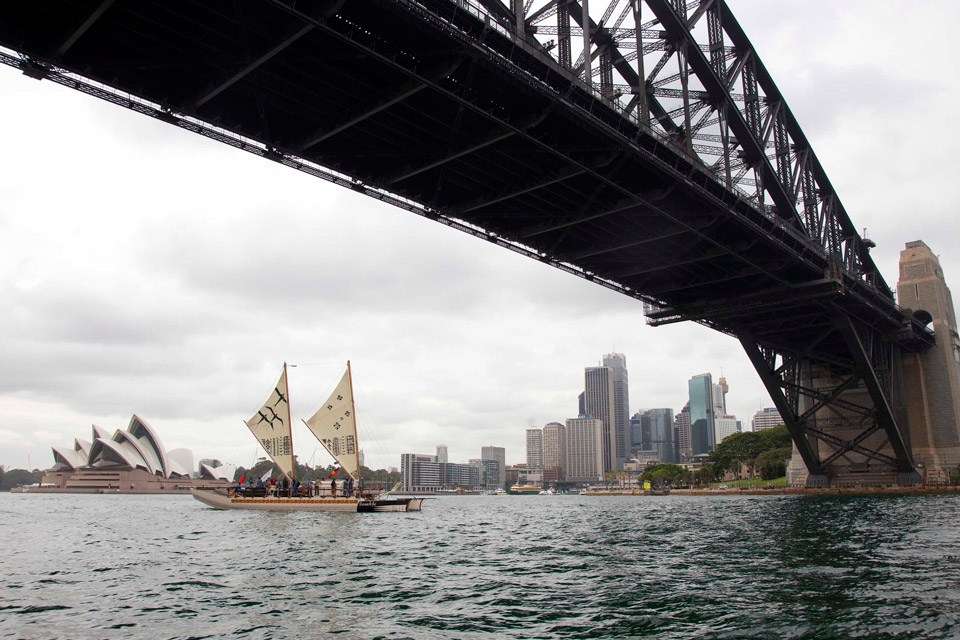 As the sun tried to poke through the clouds around 8 am, the vakas passed under the Harbour Bridge and rounded Barangaroo headland towards Darling Harbour. As we approached the museum it seemed there was a sea of green decoration around the basin. When we drew closer we saw it was in fact a huge crowd of hundreds of welcomers. The echo of drums and singing cut the stillness of the harbour as we glided in to a wonderful Pacific Island welcome—and were also met by Indigenous Sydney man Dean Kelly in his nawi—a Sydney style bark canoe. 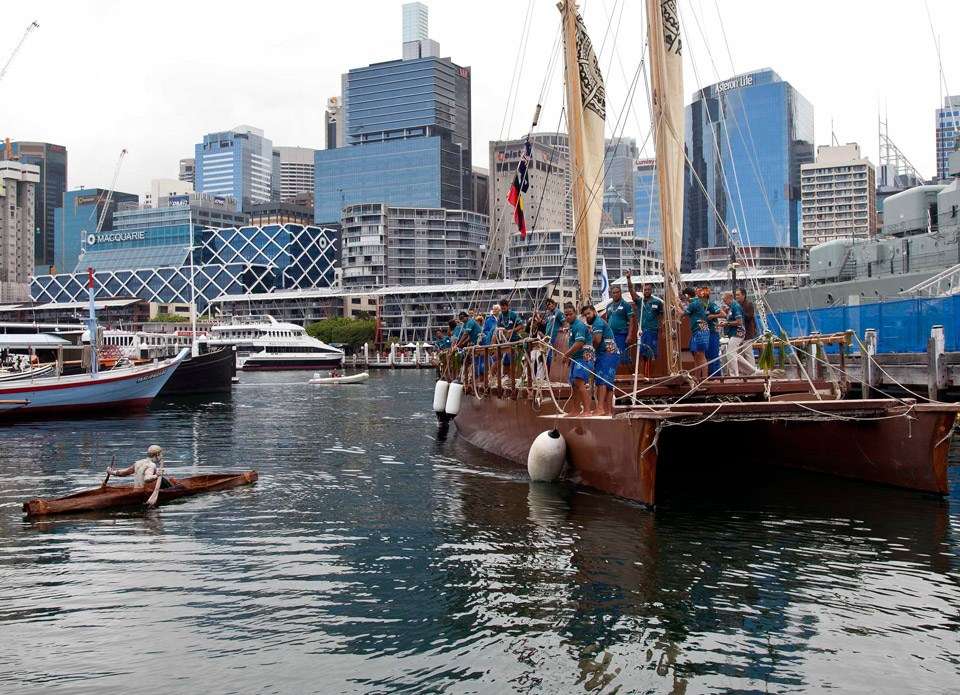 The vakas bring a message from the people of the Pacific Islands that urgent and significant commitment is needed to manage our oceans and take action worldwide on climate change to the 6th World Parks Congress, a major international event held once in every decade and managed by the International Union for the Conservation of Nature. 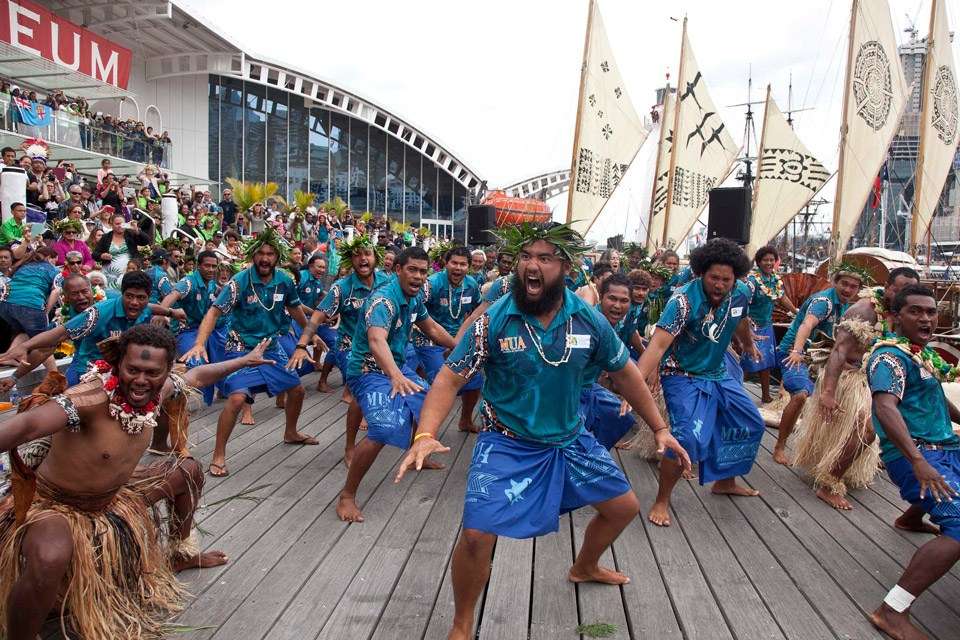 Welcoming ceremony for the voyaging vakas.

On Saturday 15 November there is a day of Pacific Island celebration at the museum. I thoroughly recommend coming along to Oceania Day and checking out the food, entertainment and in particular the amazing voyaging vakas. 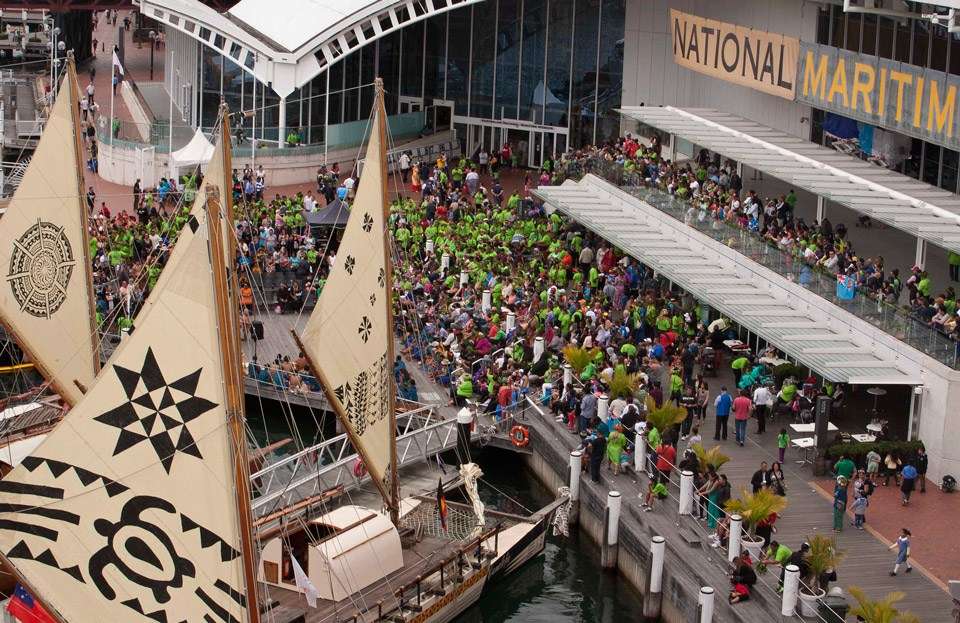 Vakas at the welcoming ceremony at the Australian National Maritime Museum.