For the anniversary of the Battle of Cocos 100 years ago, the museum is displaying a collection of material associated with the World War I German raider SMS Emden that was destroyed by HMAS Sydney on 9 November 1914. 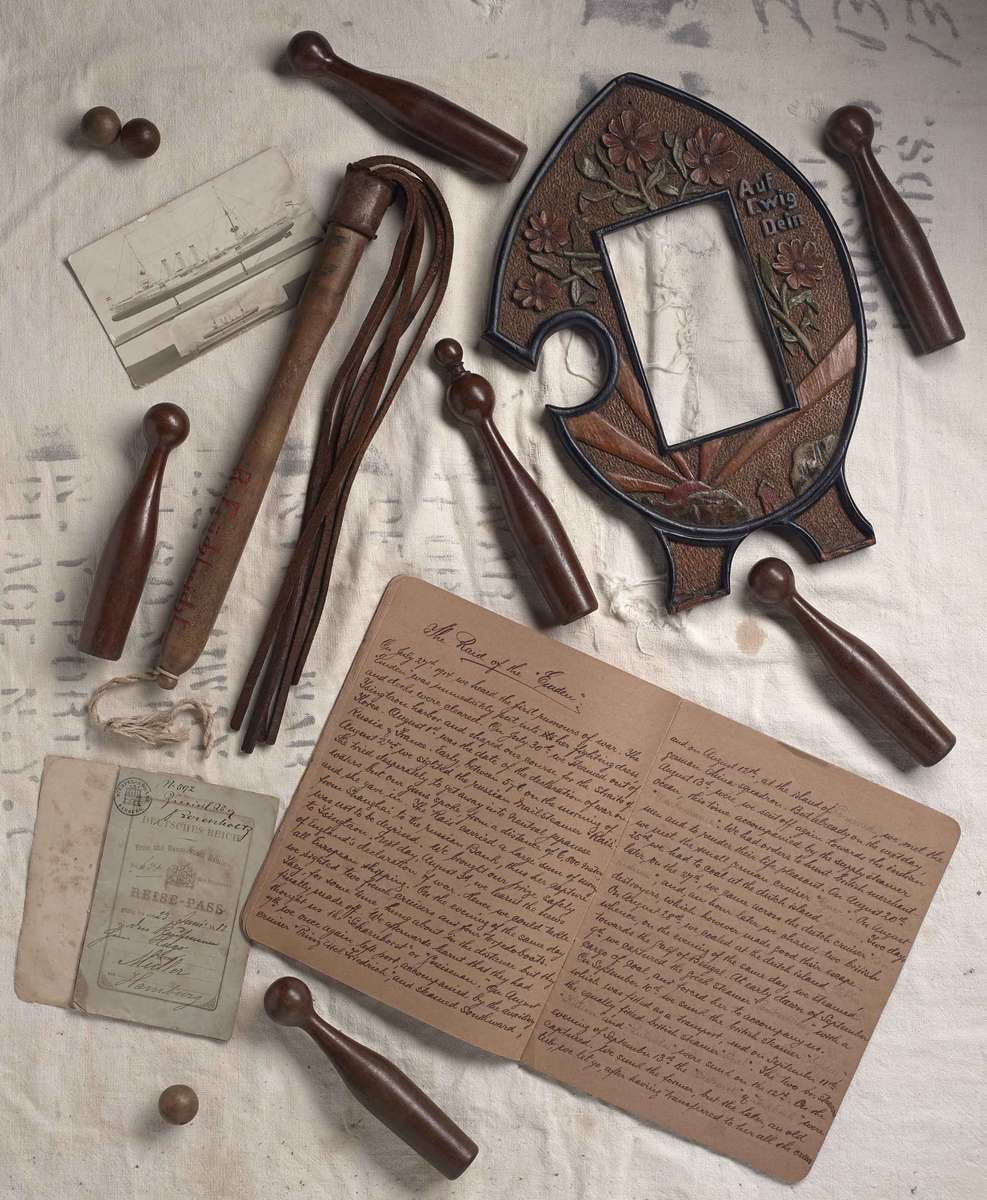 Objects on display at the museum to commemorate the Royal Australian Navy’s battle cruiser HMAS Sydney defeating the German raider SMS Emden at the Battle of Cocos on 9 November 1914.

The items include a German military songbook from 1912, a Reich Pass or travel document, two photographs of Emden crew with a model of their vessel, a small purse, a pair of glasses, and several hand-carved wooden decorative picture frames and skittles  games. Importantly, the material includes first-hand accounts by German sailors of ‘The Raid of the Emden’ and the Emden’s battle with HMAS Sydney. 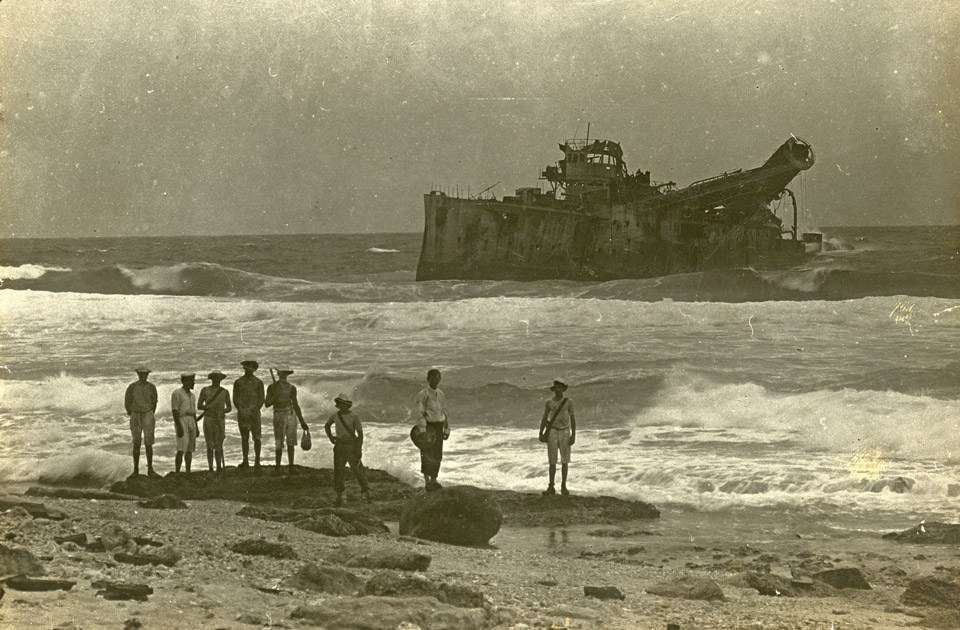 One hundred and thirty men of the Emden crew were killed in battle and 157 were made prisoners and sent to the ‘German Concentration Camp’ at Holsworthy near Liverpool, southwest of Sydney. Widespread hysteria about German spies and saboteurs in Australia saw many German workers and ships’ crews interned during the war. Even second and third generation naturalised Australians with German surnames were rounded up and spent the war in camps. At the end of World War I, only 306 of the 5,600 internees and prisoners at the Holsworthy camp were allowed to stay in Australia and the rest were deported back to Europe.

As the war dragged on, many Germans at the camp passed the hours by making art and handcrafts. They also conducted theatre and music nights and held regular art and craft competitions.

Many surviving examples of handcrafts by internees and prisoners of war show an element of defiance in their use of German symbols. Interestingly, some of the artefacts in this collection show a fusion of Australian and German symbolism – one picture frame blends Australian flora and fauna with images of the Emden and the schooner Ayesha (the vessel on which some of the Emden crew began their incredible escape voyage back to Germany). 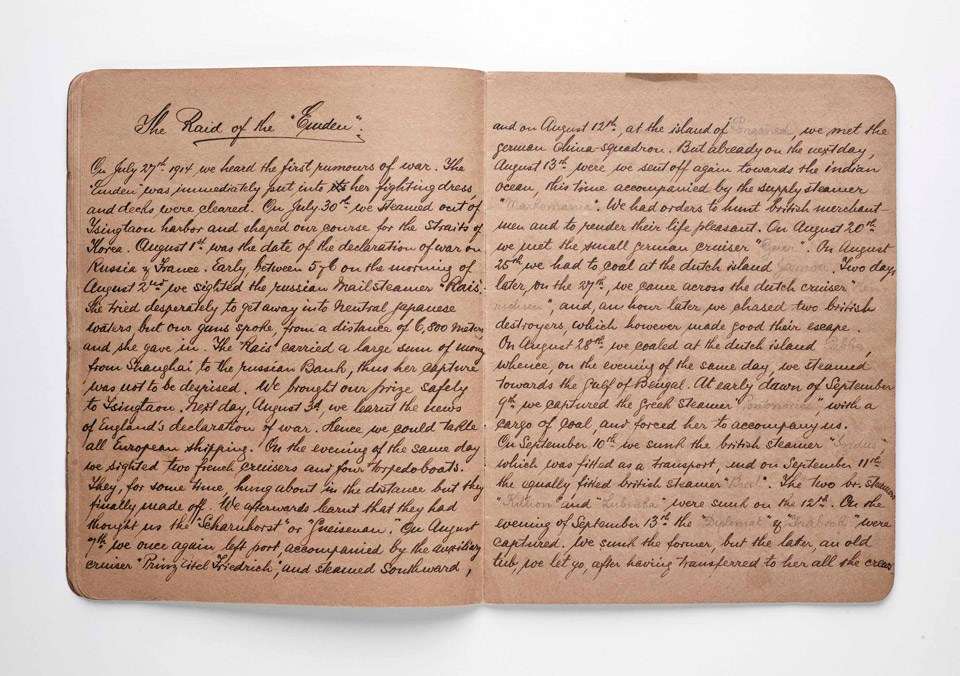 This Australian school exercise book contains a four page account by an unknown author titled ‘The Raid of the Emden’. It records a rare German viewpoint of the battle and is written in English, probably taken down by an Australian prison guard. ANMM Collection.

The memoirs of the Sydney–Emden battle were likely to have been taken down by Australian prison guards. They are important in highlighting the German experience of Australia’s first great naval battle. 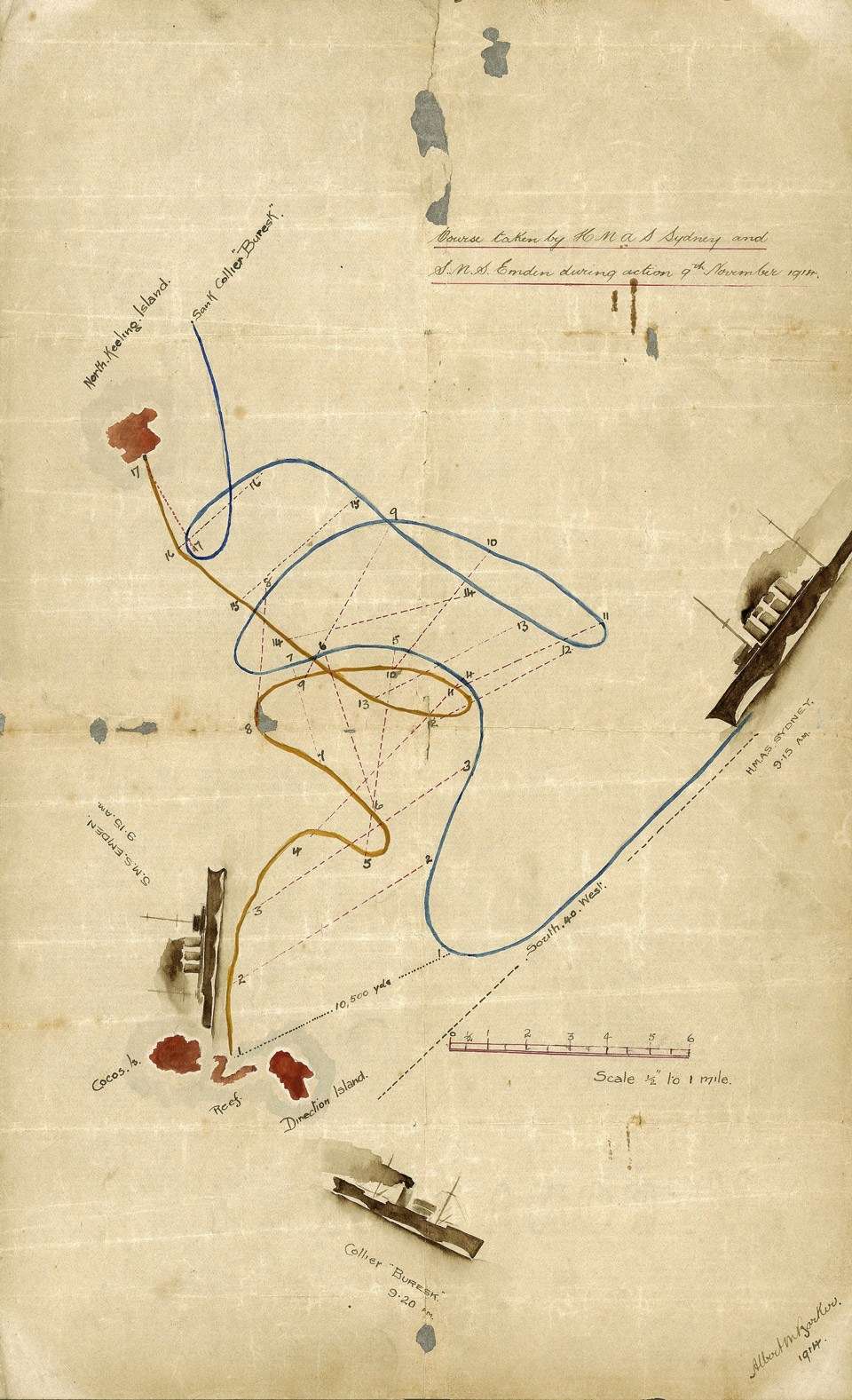 Watercolour and pen diagram of the courses taken by HMAS Sydney and SMS Emden during the Battle of Cocos. Drawn by Albert M Barker. ANMM Collection.