Cheryl Ward’s play Through These Lines tells the moving story of Australia’s WWI army nurses. The 2014 production, directed by Mary-Anne Gifford, has its Sydney season at the Museum, 25-28 September and 3-5 October.

As part of the research for the play, Cheryl travelled to Lemnos to walk in the nurses’ footsteps. Using period photographs and diaries crammed full of invaluable eyewitness accounts, Cheryl was able to turn back the clock 100 years.

About 60 nautical miles off Anzac Cove is a large, deep water harbour that once sheltered an armada.

“Those members of the A.I.F. [Australian Imperial Force] who saw Lemnos can never forget the wonderful concentration of shipping which sprawled over the spacious harbour of Mudros“, wrote a soldier in Reveille in 1935.*

Here were marshalled the forces for the seaborne invasion of the Gallipoli peninsula.

“Everything that could float seemed to be there, from the world’s largest battleships and liners down to the tiny torpedo boats and trawlers… Freakish-looking craft not seen before by Australian eyes helped to swell this floating world.”

Submarines, seaplanes from the Ark Royal and an airship strung high above the balloon ship Hector only added to the spectacle.

Those who didn’t pack a pocket camera must have been kicking themselves.

Sister Evelyn Davies, a 31 year old trained nurse from Healesville near Melbourne, had hers.

On land there was no shortage of interesting subjects either, from British sailors –  ‘Jack Tars’ – to Turkish prisoners and Greek villagers. ‘Tev’ even turned the camera on herself, sitting on a Greek ‘donk’ (donkey).

Writing home, Sister Davies told her mum “I have run out of films, but am expecting them any day now. There are crowds of snaps I want too… I feel lost without a camera…”**

That her snaps were important cannot be doubted.

“Hang on to them Mum,” wrote Sister Davies, “don’t let any one ‘pinch’ them.”

Photos taken by our army nurses are among thousands of images of Lemnos and Mudros now to be found in the collections of the Australian War Memorial and state and national libraries.

Not only are they a fascinating pictorial record, they helped lead us to the exact site of the hospitals on Lemnos. 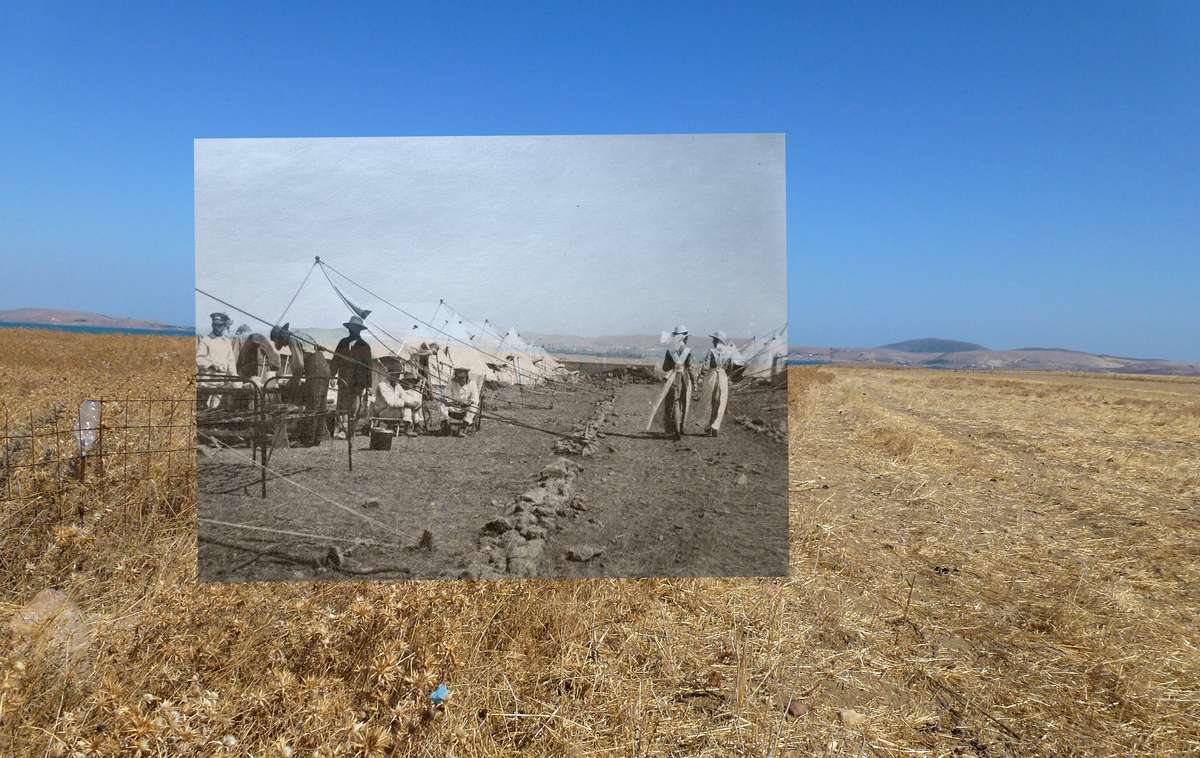 The official Australian history has only a general sketch map of the field hospitals. No published work since – as far we know has – has mapped their location with any precision. But the Anzacs’ photos of Lemnos proved to be our best guide.

Unlike France and Flanders, where big skies dominate the background, mountains rarely fail to frame the photographs taken at Mudros. We poured over Google Earth for hours at a time, rotating and tilting the view, matching the background of photos to mountain silhouettes.

With a well-marked map, a GPS and hundreds of prints, we travelled to Lemnos in 2011 to put our assumptions to the test.

It was a revelation.

There you are, standing in the same spot as the photographer, a century or so later, looking up to find the original setting reveal itself before your eyes. 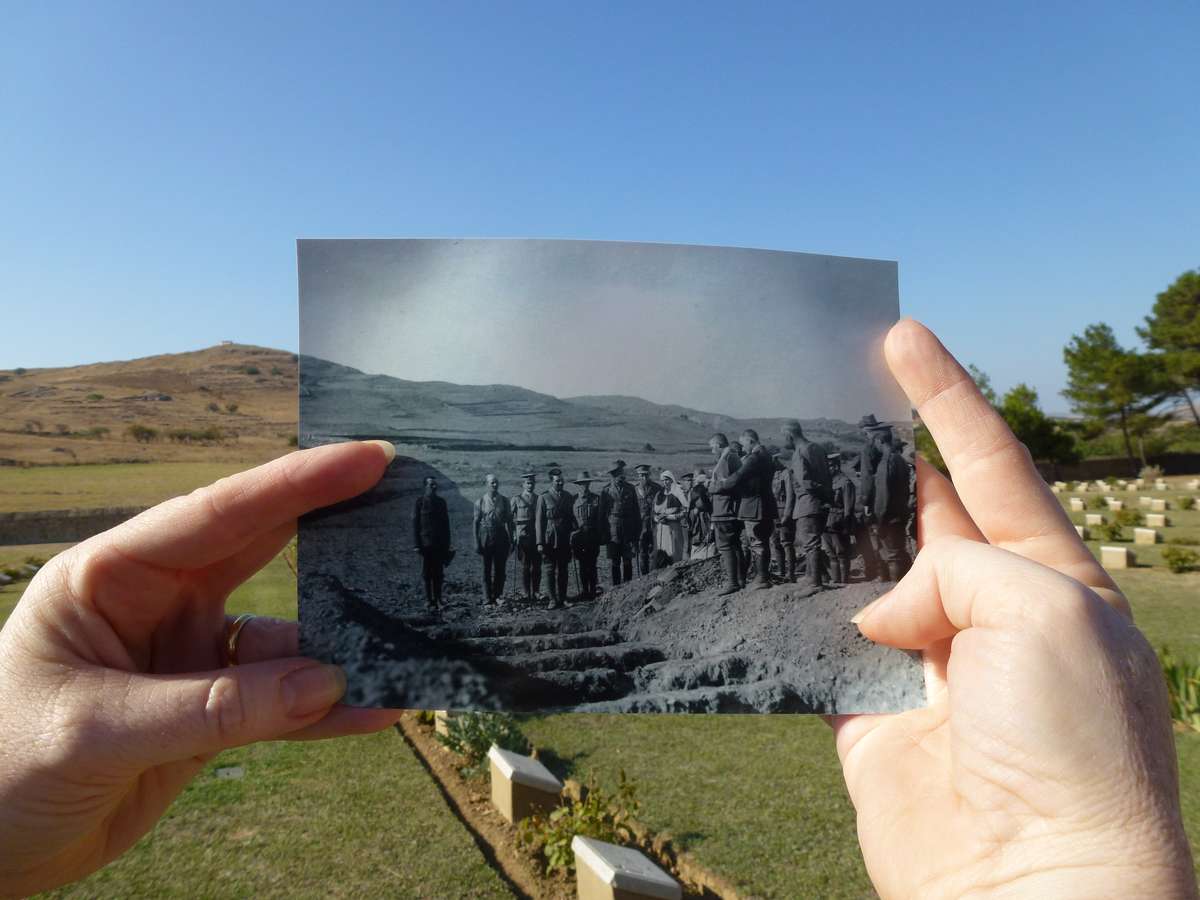 Burial service, Portianou, then and now. Photo A. W. Savage, B. de Broglio.

Not much had changed. Gone were the flies and dysentery but the debilitating wind that harried the stony, burr and thistled ground was straight from the nurses’ letters and diaries.

From the heights of the 2nd Australian Stationary Hospital, we could look down what had been ‘Macquarie Street’, the main road through the 3rd Australian General Hospital. Picnic-ing on a spur, we could watch with the nurses the barges evacuating soldiers from Gallipoli. We swam across the faint footprint of jetties that helped stock the hospitals with supplies and wounded. Near the Canadians’ hospitals we saw a dusty route march pass by, and from a scrambled hillside descent saw a file of Anzacs, boots strung across shoulders, wading the mouth of the lagoon towards Sarpi rest camp. At the nearby village of Portianou, we followed a military funeral procession and burial.

Everywhere on the island, the figures of a century ago took their place in the landscape. Very little remains on the ground but, thanks to digitisation and the internet, the photographic record of Lemnos just gets richer.

Some of the best of these images were taken by a young Englishman who had come to Sydney to make his living as a photographer. Albert William Savage signed up for the Australian Imperial Force in 1915 and was assigned to the 3rd Australian General Hospital, perhaps taking up a position in the X-ray department.

His prints were in demand then as they are now. They take pride of place in photo albums kept by those at Lemnos, like Sisters James-Wallace and McMillan, and Commanding Officer Lieutenant Colonel Sir Trent Champion De Crespigny.

The pictures featured in The Sydney Mail as a lavish pictorial spread to mark the first Anzac Day in 1916. 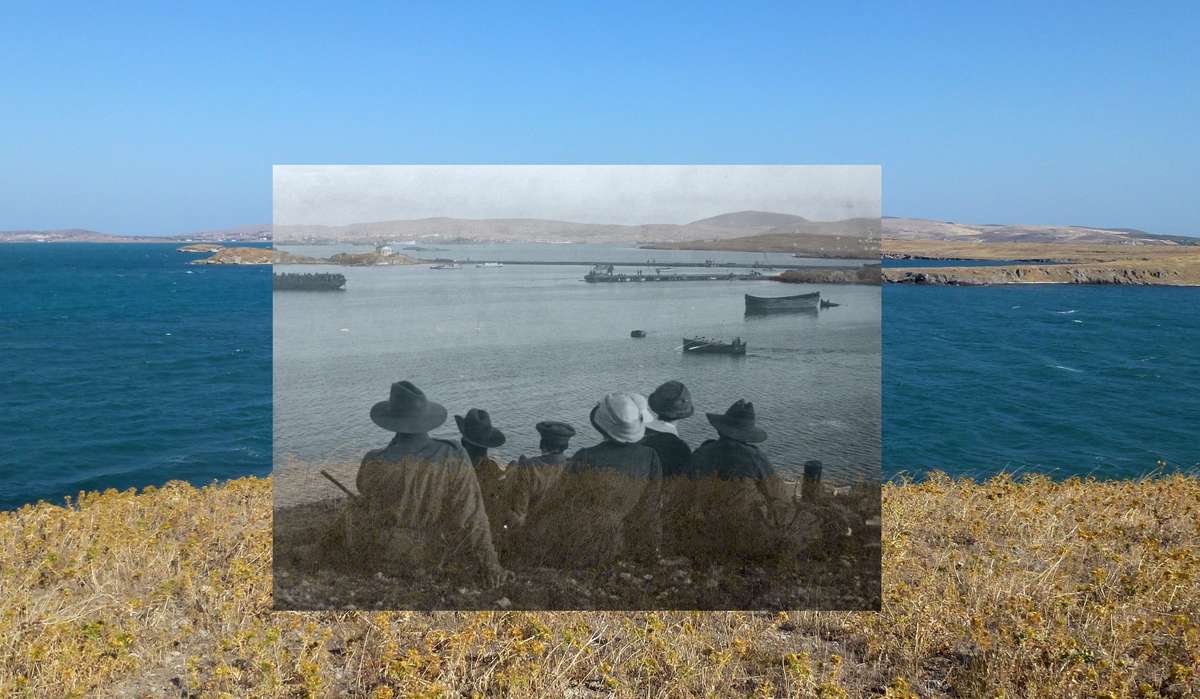 ‘Evacuation of our troops from the Peninsula. Barges conveyed them from transports to the Island.’ Photo A. W. Savage, C. Ward & B. de Broglio.

Despite the hardships, perhaps because of them, the nurses came to look affectionately on Lemnos. Like the Anzacs, the Australian Army Nursing Service had made its name at the Dardanelles. ‘Those shabby Sisters with the bright colour’*** were the envy of their peers.

Today you can stand on the windswept peninsula above Mudros harbour and, with their treasured photos in hand, see again through their eyes.

Book now to secure your seats for Through These Lines. 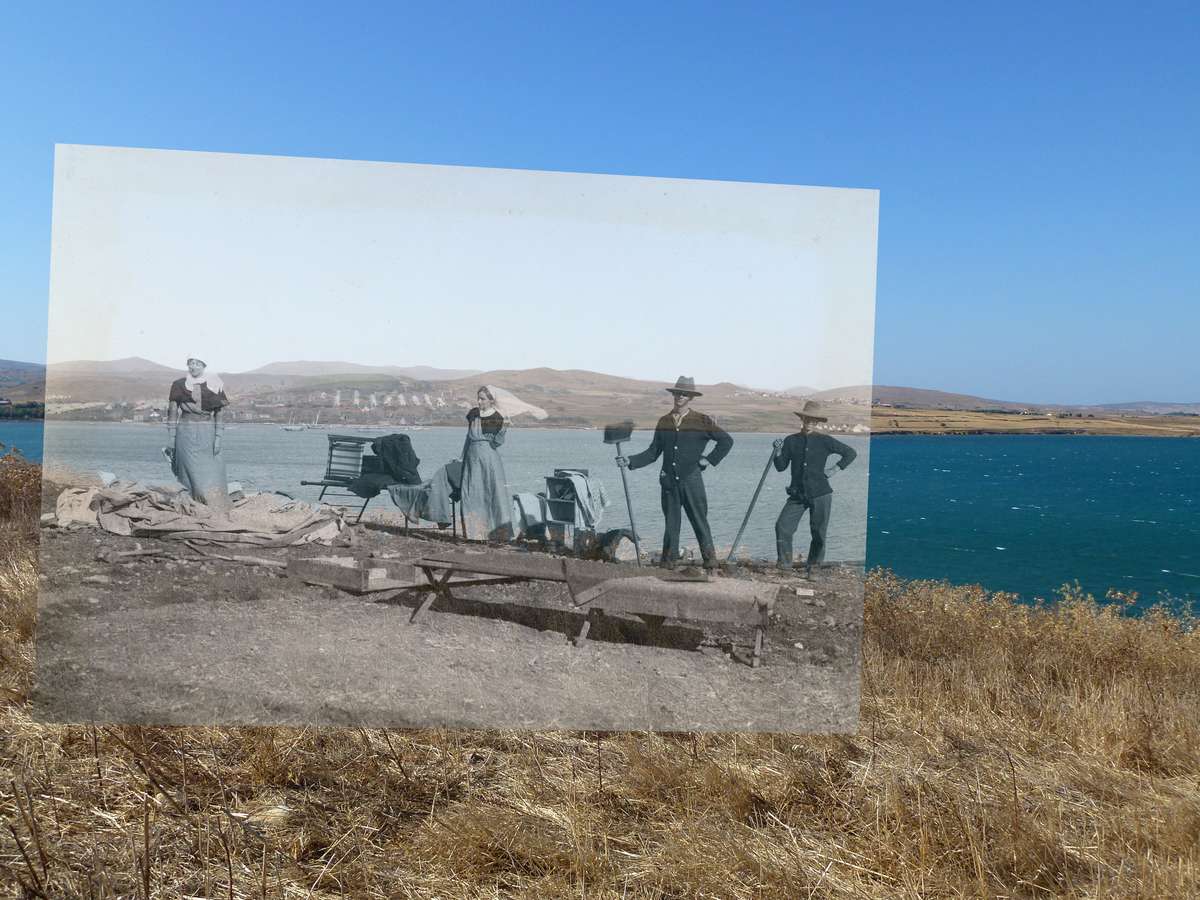 View all posts by ANMM Guest→
Posted in: Navy and defence
↑