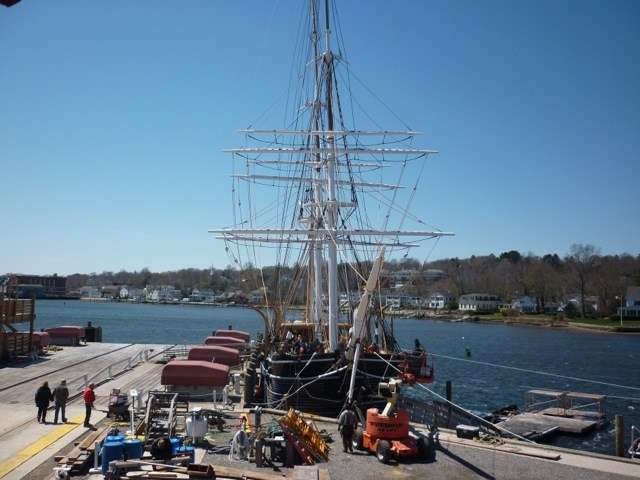 The Charles W Morgan alongside the shiplift dock. The shiplift was installed in 2007 and used to lift the whaleship, carefully cradled in blocks and braces, out of the water. A computer controls the lift, monitors and distributes loads and protects the vessel from damage. A horizontal track system moves the vessel ashore and a concrete platform under the rails collects all waste from the work on the ship. This protects the Mystic River’s water quality and marine habitat. Photos courtesy of Lesley Walker.

In April this year I climbed aboard the Charles W Morgan at her dock at Mystic Seaport Museum in Connecticut, United States for the first time. With a sailing date of 17 May fast approaching, riggers and shipwrights, painters and crew, electricians and carpenters, plumbers and deckhands were swarming about the ship in a frenzy of activity, patiently side stepping the curious and fascinated public who came to marvel and to question. 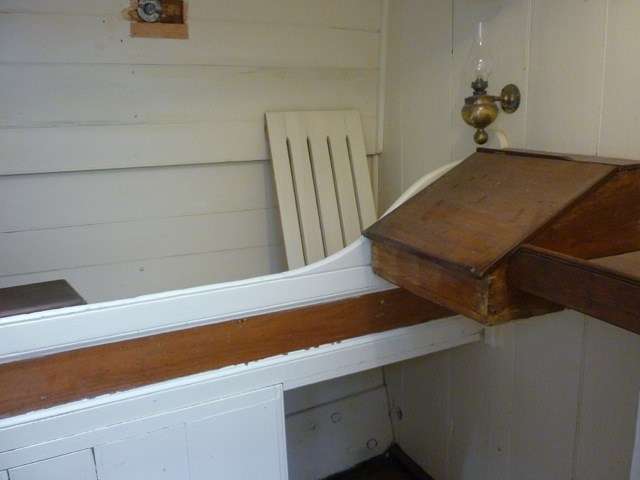 First Mate’s Cabin showing the writing slope and lamp for keeping the log.

I sat for a while at the captain and mates’ table beside the cabins which Norfolk Islander George Parkins Christian occupied for 20 years, reflecting and writing, and exploring the crew cabins, the blubber room, the between decks areas. I felt the ship move heavily at the dock as she responded to the 45mph winds, listened to the creaking of the hull and the sound of the wind singing through the rigging. Almost as if she sensed her imminent freedom. I talked to Tim, a crew member painting thick tar on the dead eyes and rigging and Paul, a shipwright busy with woodwork below. Their excitement and passion for the project was infectious. Behind the roped off area, Paul showed me the gimballed and carved captain’s bed made for Lydia Landers when she joined her husband in 1863, the first of five captains’ wives who sailed on the Charles W Morgan. Quite comfy!

From the moment I discovered that this historic 1841 whaling ship still existed in Mystic Seaport I have wanted to visit. Little did I realise that I would also get the chance to sail on her! The Charles W Morgan, veteran of 37 whaling voyages in the Pacific, Atlantic, and Indian oceans between 1841 and 1921, is making an historic 38th voyage from Mystic Seaport to Boston from 17 May-August 2014. I am lucky enough to be one of four people from outside the USA and the only Australian chosen to be part of the group of 79 38th Voyagers. Each of us has a personal project – art, writing, education, film, scientific or historic research, photography, literature, poetry, music, journalism, oceanography, conservation – and the 38th voyage will allow us the opportunity to experience, explore and create, producing a lasting legacy from the project and for the museum at Mystic Seaport. I will be sleeping on board the night before we sail and travelling, hopefully sailing, from Vineyard Haven to New Bedford in late June. 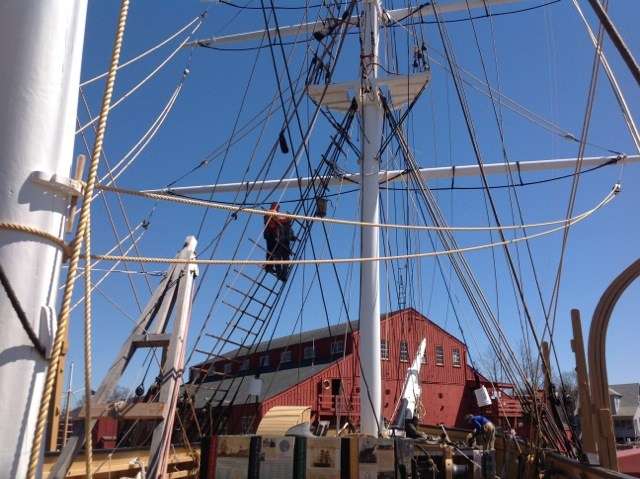 Working on the rigging of the Charles W Morgan, in the background the H.B. du Pont Preservation Shipyard.

My Charles W Morgan project is part of a research and writing project on settlers, including my great-great grandparents, on remote Pacific islands in late 19th and early 20th centuries. To give you something of the flavour of why this is so exciting and important for me, let me say first of all that this is a ship my great-great grandparents knew and saw, sailing off their remote island home, and possibly even visited aboard. At the very least they knew crew members, especially George Parkins Christian who had first arrived at Sunday Island (now Raoul Is.) on another New Bedford whaler, the California, before he signed on as mate on the Charles W Morgan in the 1890s. My great-grandmother Bessie also knew the ship so this wonderful survivor is a direct link between them and the past and me and the present. Over the next months I am concentrating my research on the whale ships which visited Sunday Island, reading their logs where they survive, and on members of the crew that were mentioned by name in my great-grandmother’s recorded memories. I will also be looking at the attitudes of my ancestors to whales and whaling and the links between the whaling ships and Sunday, Pitcairn and Norfolk Islands. 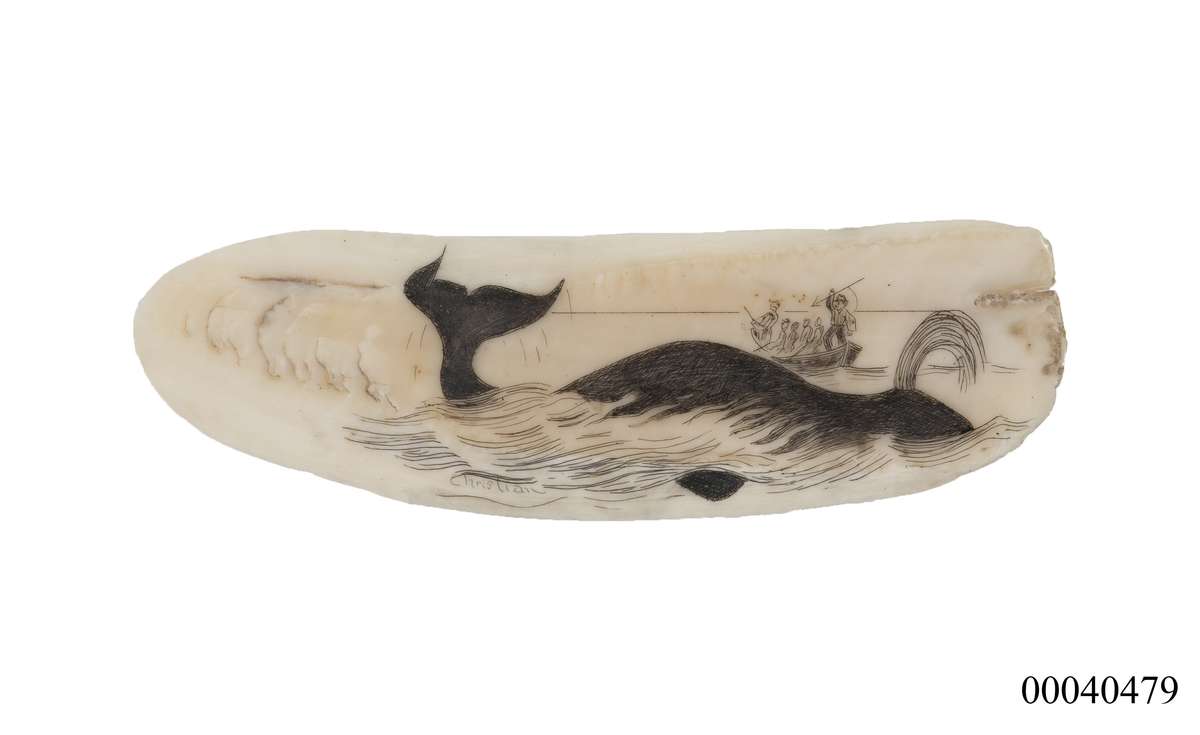 Whale tooth believed to have been carved by George Parkin Christian. The signature ‘Christian’ is inscribed on the lower left.
ANMM Collection

What has the Charles W Morgan got to do with Australia and the Australian National Maritime Museum? Aside from one of her whaleboats on display in the USA Gallery, she cruised in Australian and New Zealand waters after Sperm, Right and Bowhead whales and her first voyage, in which she made £14,000 for her New Bedford owners, was to the Pacific. Sydney/Norfolk Island/Bay of Islands/Kermadecs track was a familiar one for the whalers. Charles W Morgan’s multinational crew included Pacific Islanders, Maoris and possibly Aboriginal Australians as well as several men from Norfolk Island, Quintals and Christians, descendants of the Bounty mutineers on Pitcairn Island who moved to Norfolk Island in 1856. According to W.J. Dakin’s Whalemen Adventurers in Southern Seas, Parkins (or Parkinson) Christian started whaling on the Sydney ship Robert Towns. The Australian newspapers regularly reported on the American whaleships’ movements through the Pacific with their valuable cargoes of sperm oil, baleen and ambergris and the first recorded arrival in Sydney of a New Bedford whaler was the Diana in 1800. 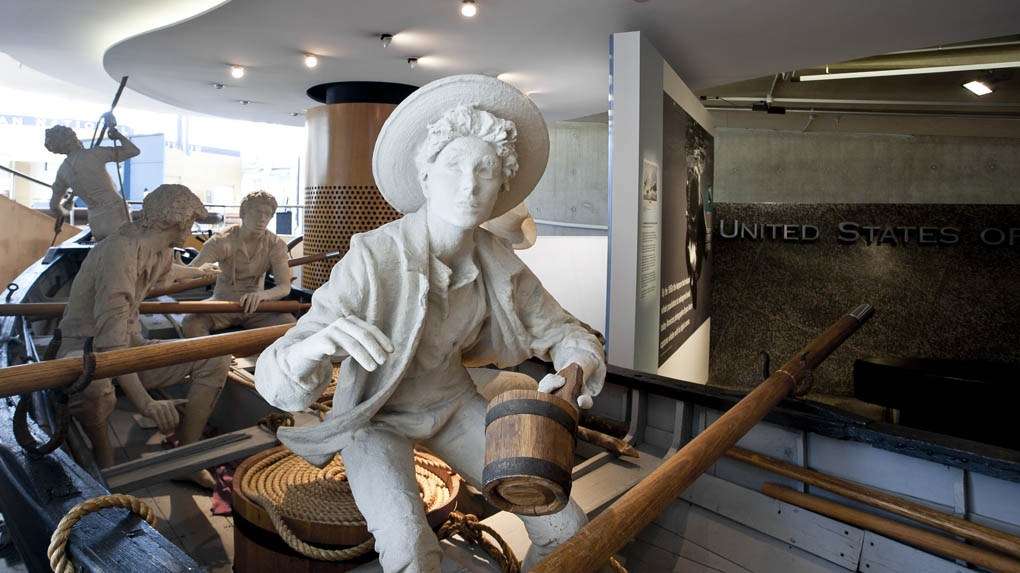 Whaleboat from Charles W Morgan on display in the museum’s USA Gallery.
Lent by Mystic Seaport, The Museum of America of America and the Sea.
Photo by Andrew Frolows, ANMM

As a passionate heritage professional I will be exploring how Mystic Seaport has shaped the restoration and research project starting with a daring vision of what might be possible – sailing the last surviving wooden whaling ship once more – and engaging the public in realizing that vision.

Currently working as a heritage consultant in UK, Lesley Walker is from Sydney. Head of Learning at the Historic Houses Trust of NSW (now Sydney Living Museums) until 1995, Lesley also worked in Public Programs and Visitor Services at the Australian National Maritime Museum in 2002-03 when completing her PhD in migration history. As well as sailing on a classic 1937 Harrison Butler designed wooden yacht and a more contemporary Contest 48 ketch, Lesley now lives on a 1938 Thames tugboat berthed in Woodbridge, Suffolk. Follow her blog for updates on her project!

View all posts by Guest→
Posted in: Vessels
↑