The wreck of the Dunbar in 1857 is a well-known story in Sydney and the effect it had on the colony at the time. One of the outcomes of the wreck was the recovery of the artefacts it left behind. In addition to the ship itself, there were hundreds of everyday objects that do not often survive the rigours of domesticity but tell the story of life in a growing colony. In effect the wreck becomes a time capsule, preserving together the materials of many different industries and areas of life. 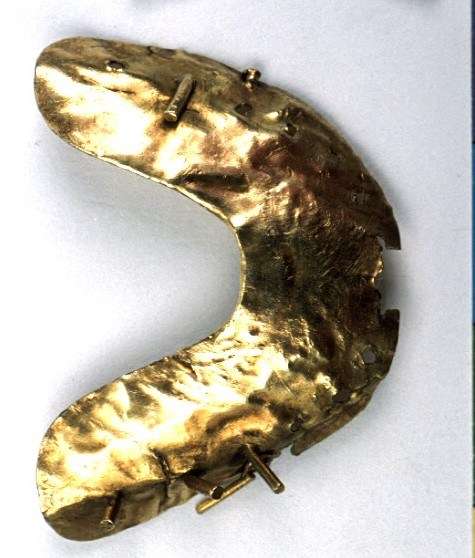 Denture plate recvered from the Dunbar shipwreck of 1857.
ANMM Collection

There were many day to day items in the Dunbar collection that tell of the increasing wealth of its residents. Remnants of clocks, watches, furniture labels from iron bedframes and ovens, coins, jewellery and silver tableware are just a few. Some small but interesting pieces also found were sets of dentures. These are made of gold and despite their torture like conations, they are surprisingly delicate and one of the many wonders of what could survive a devastating shipwreck such as the Dunbar. It did get me wondering what the state of dentistry was in the colony of Sydney in 1857 and whether these dentures were an export from London, or did they possibly belong to one of the passengers? We know from the passenger list that there were a number of wealthy passengers on board who could have afforded dentures and at least one surgeon, Alexander Bayne,  who might have been a practicing dentist also.

Dentistry across the globe up until this point was an unregulated industry and attracted many pretenders. Traditionally the practice was a side industry for surgeons, chemists and even silversmiths. Australian newspapers from the early 1800’s onwards have numerous advertisements for dentists. And it is interesting to see that most promote other services as well. There were ‘dentists’ who were also apocathries, accoucheurs (male midwives), surgeons, photographers and ‘cuppers’ (practitioners of bloodletting). The usual arrangement at this time was to set up a practice in a room in your house and advertise the hours you would be ‘at home’. It was a relatively casual affair it seems as there was no sterilization or hygiene standards to consider so a ‘dentist’ could indeed be multi-tasking practitioner.

Dentures were a common solution to tooth problems during this time. Tooth extraction was the standard response to tooth pain or dental problems. In fact dentists were often known as ‘gum diggers’ and as prevention was not a priority, their focus was on speed of extraction and minimal pain. Many thought the mass removal of teeth and the replacement by dentures were a long term cure for future tooth pain and problems. 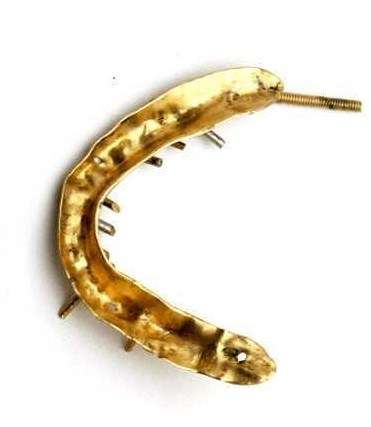 Another denture from the Dunbar showing the teeth attachment screws and a single spring at the side.
ANMM Collection

By the 1850’s denture plates could be made of platinum, silver or gold, such as those from the Dunbar. This style of denture had been in development since the 1830’s when a London jeweller, Claudius Ash, applied his trained eye to the denture industry. It has been suggested that Ash was also a surgeon at Waterloo and if so, his attention to dentistry seems a natural pursuit for the times. From this point we see fine springs and wire being used to attach the plates into the mouth. Although painful to contemplate now, it would have made eating and talking much easier activities to the wearer back then. The development in 1839 by Charles Goodyear of vulcanized rubber also improved the denture industry significantly by enabling a more comfortable fit and a more stable foundation for the replacement teeth. Yet as the plates themselves were not customized they must still have been incredibly uncomfortable. 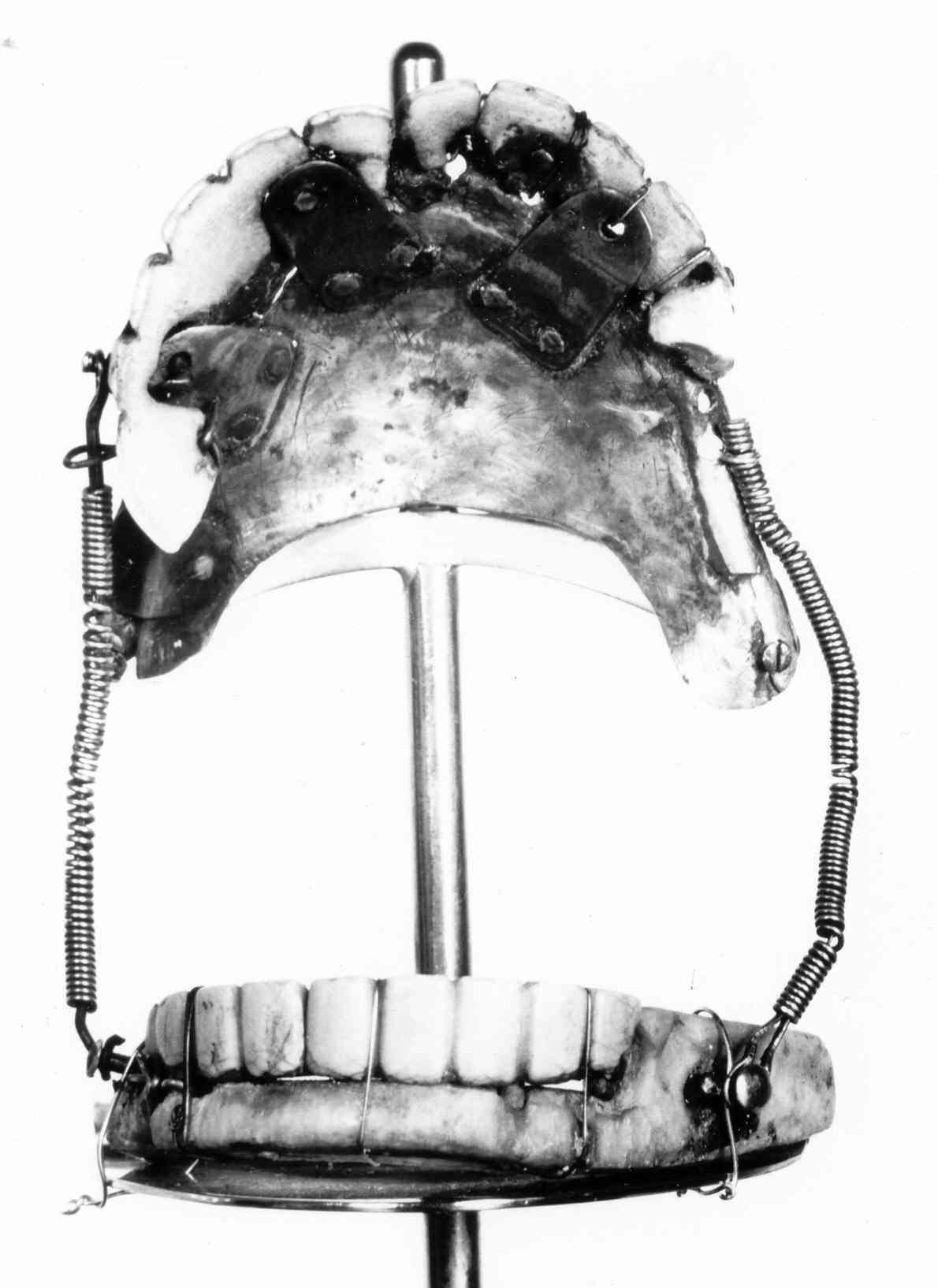 The artificial teeth used in the dentures were made either from porcelain, which was prone to chipping and grating, or were human. Human teeth replacements were still generally preferred as they were more natural looking than their porcelain counterparts, kept their colour longer and were tougher. However they did tend to eventually rot and would also need to be replaced. This led of course, to the need of an ongoing supply of teeth. Dentists had two options, obtaining them from the poor who sold them or to purchase those taken from cadavers. The removal of teeth from corpses had been in place for a long time and although the practice would eventually become frowned upon, it was still viewed as an accessible resource in 1857. Wars were a reliable source of teeth and during the Crimean War of 1853 and later the American Civil War of 1861, the supply was steady.

It is difficult to imagine the lengths and pain people would have gone through in the days of the Dunbar to have a full set of teeth. First you would have to endure the removal of your teeth by a drill, mallet or pliers. Then you were then faced with the prospect of a metal plate with screws and springs holding a set of someone else’s teeth in your mouth. And this was only if you could afford such a ‘luxury’. 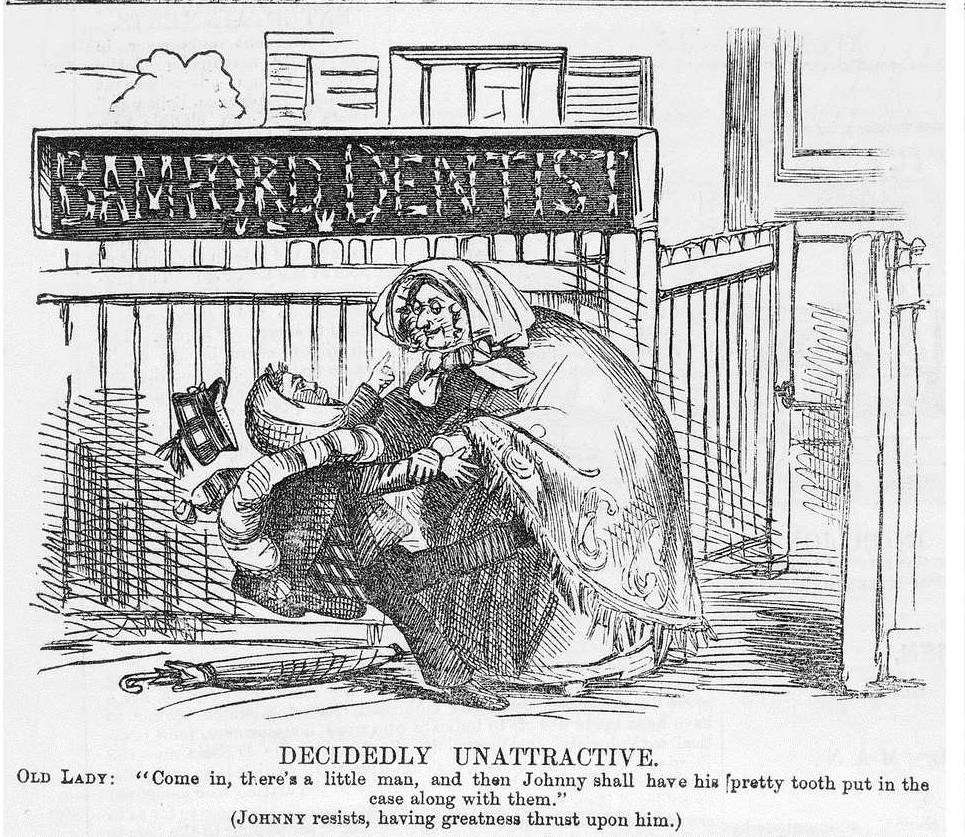 Old Lady: “Come in, there’s a little man, and then Johnny shall have his pretty tooth put in the case along with them.” 1856
State Library of Victoria

View all posts by Myffanwy Bryant→
Posted in: From the collection