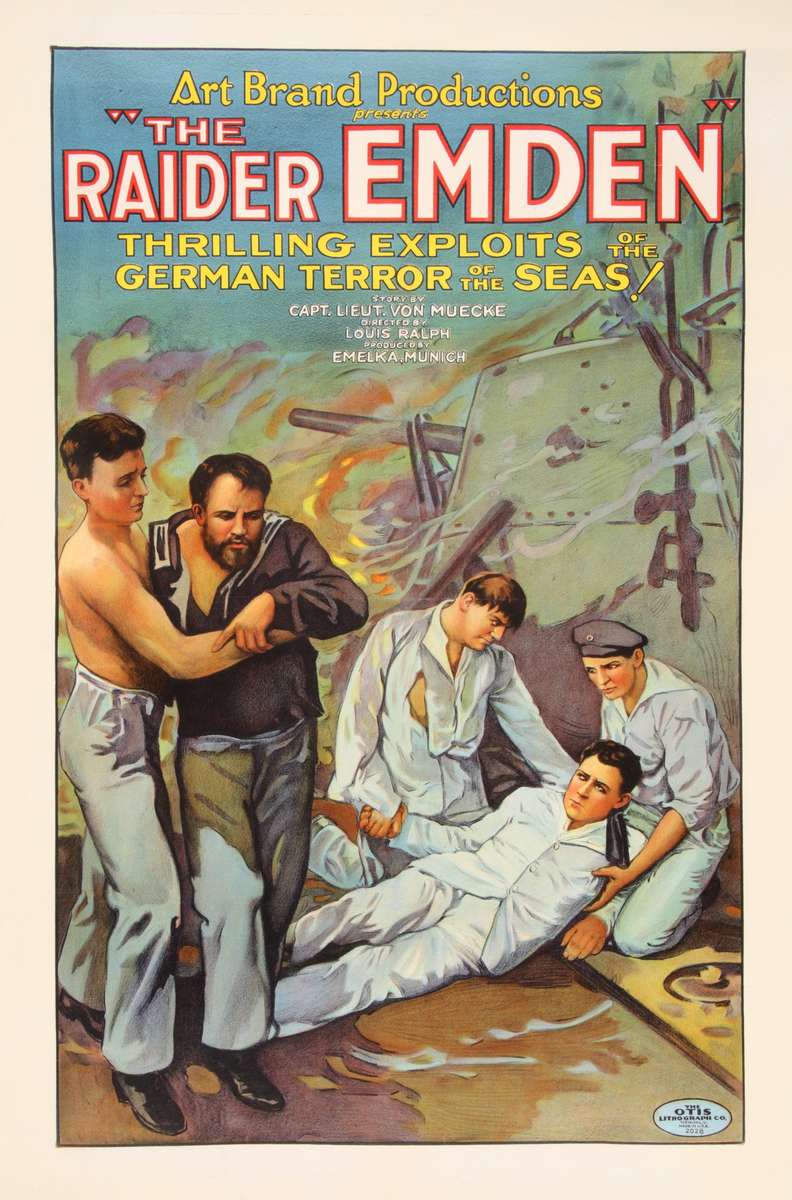 The sinking of the German Cruiser SMS Emden by HMAS Sydney in November 1914 was a siginficant moment in Australia’s experience of the First World War.

This was the first great naval engagement of Australia’s navy that had just been formed in 1913. The cruiser Sydney ended the amazing exploits of the Emden that had been raiding the Indian Ocean seemingly at will, capturing the imagination of publics around the world. The battle was celebrated with great gusto by Australians as their first victory in the war – and a victory that was on the international stage.

The battle – and the subsequent amazing escape story of a shore party of Emden crew that were left behind on the Cocos Islands yet made their way back to Germany – became the subject of books, posters and all manner of celebratory ephemera, including several films.

Even in the late 1920s the Emden story resonated with Australian and overseas publics. In fact so much so, that in 1928 a German made film Unsere Emden (Our Emden) was acquired by First National Pictures in Australia. It was bought sight unseen because of its perceived box-office potential.

However as film producer Anthony Buckley has noted, when the head of First National Pictures John C Jones and director Ken G Hall sat down to watch the film, they realised it was a disaster. As Hall later wrote, the film ‘would never be accepted by Australian audiences because it was straightforward propaganda’.

Hall continued; ‘It was documentary in style, with much footage obviously shot on ‘Emden’ by a cameraman who was not a professional. …when it came to the sequences involving the ‘Sydney’ – well, they were a pretty poor joke. Square-headed German sailors in funny looking caps racing around as Australian tars would have had audiences in stitches or wild with rage.. the German producer had no pictures of ‘Sydney’ in action, apparently no pictures of ‘Sydney’ at all. We had been had…’

However Jones and Hall didn’t give in and contacted the Australian Navy to ask them to provide the Sydney for filming. Perhaps they could still get a film out of this ‘disaster’.

To Hall’s great surprise, the navy said yes. He wote in his autobiography; ‘What a break! Afloat with the Navy on a ship which had written her name into history, and with a film to make for good measure!’

Newsreel cameraman Ray Vaughan and Claude Carter were the cinematographers. They spent a week aboard the Sydney while on manoeuvres and conducting target practice off Jervis Bay – perfect for filming a ‘reenactment’ of the 1914 battle. Hall received considerable cooperation from the navy. He had white officers’ uniforms dyed a light blue to avoid halation, a ‘halo effect’ on the film. Hall even seconded  sailors from the crew for some comedy sequences and the navy provided a second ship so that Carter could film shots of the Sydney at full speed.

Hall wrote the additional scenes, produced and directed the film, wrote the subtitles and then became publicist for the film. 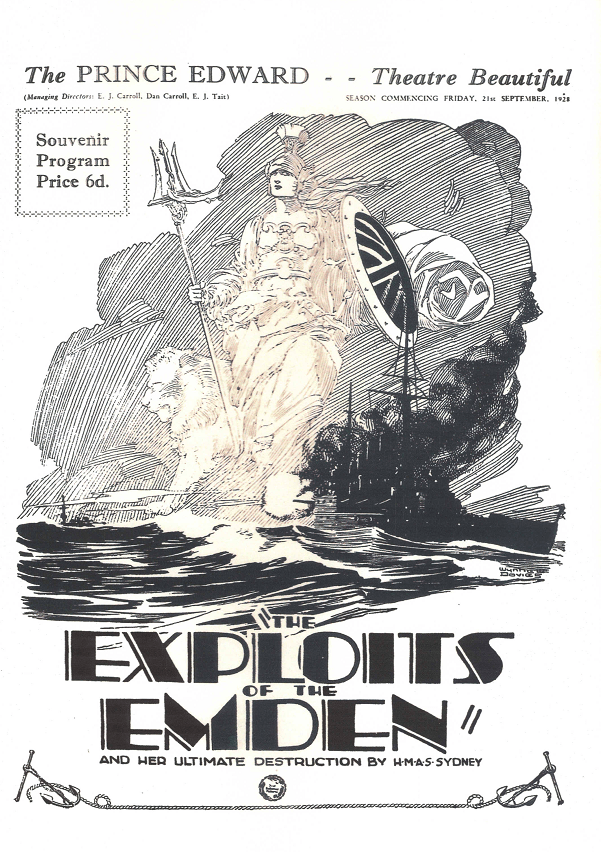 The new version of the Emden story was titled ‘The Exploits of the Emden’ and opened on 21 September 1928 at what was then Sydney’s ‘number one’ cinema the wonderfully named ‘Prince Edward – Theatre Beautiful’. Hall’s efforts were rewarded – at a time when the theatre changed its films every week, ‘Exploits of the Emden’ ran for a three week season.

The poster for the USA release of the film shows the revised title for North American audiences – ‘The Raider Emden’. Anthony Buckley suggests this is undoubtedly Ken G Hall’s re-versioned film, not the German original. While much of the 1928 Hall film has been lost, reconstruction has shown that the original German version by Austrian Louis Ralph (who also played the Emden Captain Karl von Müller) was not the complete ‘disaster’ Hall and Jones described.

Mythmaking about the Emden story was important to both Germans and Australians, for different reasons. As curator Paul Byrnes has noted, the German film industry produced a film to celebrate the heroic exploits of a ship that was important in the post World War I German psyche. They made it in 1926 at a time when the secret rearmament of the German military was underway, accompanied by a growing propaganda campaign. Two years later, the same film arrived in Australia and Ken Hall was charged with recutting it to weed out the German propaganda and make the film more appealing to Australians, who had their own reasons to love the story.

Further information about the ‘Test of War’ Young Composers’ Competition can be found here.