Sailing programs in Cook’s Endeavour are all designed to give those joining an unforgettable experience. Unlike passengers in a cruise liner, those joining this stunning ship do not enjoy a swimming pool, a casino or an evening in the cocktail bar. In fact, the ship is dry. Those joining the ship are not even referred to as passengers but as voyage crew and supernumeraries. The 36 voyage crew help sail the ship, climb the rigging and sleep in hammocks. The four supernumeraries occupy the cabins once the home of Cook’s scientific team including Banks and Solander. Whilst not compelled to crew the ship, the four supernumeraries often find themselves drawn into the same tight knit team of true voyagers. 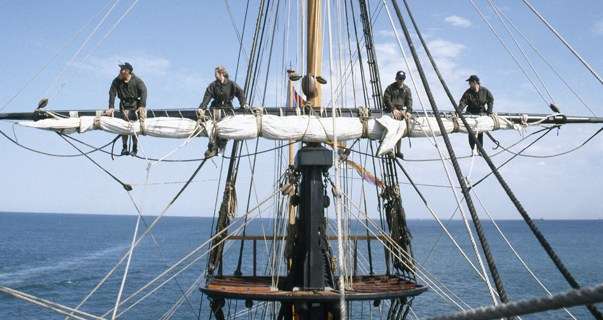 With no modern sailing aids onboard, crew must climb aloft up to 39 metres to unfurl and furl Endeavour’s 17 sails.

At sea, voyage crew keep watches, learn to set and hand in sail, climb the rig, steer and help maintain the ship. For those interested, you’ll learn to navigate by planning a passage, putting terrestrial fixes on the chart and working out latitude from the noon altitude of the sun.   Although the ship is sailed traditionally, not everything onboard is strictly 18th century. In the space originally making up the hold, there is a comfortable saloon and modern facilities such as toilets and showers. There are also two 400 HP engines, generators, fridges, freezers, a water maker and a sewage plant.

You may not quite be an ‘old Tar’ when you get back but you’ll never be quite the same.

In the Footsteps of Cook, d’Entrecasteaux and La Perouse 6 May – 5 June

Endeavour is shortly to sail to New Caledonia and this will be ship’s major excursion for 2014. Historically, French and British ships of exploration travelled under Passports of Safe Passage, even when both countries were locked in war. In the spirit of exploration, and in the footsteps of Cook, d’Entrecasteaux and La Perouse, Endeavour will sail under a similar regime visiting French New Caledonia. Many of the places visited will be where these great explorers sailed and anchored their ships.

Endeavour will leave the Australian National Maritime Museum on the morning of 6 May 2014 and return on the evening of 5 June. There will be three opportunities to take part in this historic deployment.

6 – 16 May  Sydney to Noumea. Following a day of training at anchor, the ship will sail direct to Noumea. On passage, oceanographic experiments will be conducted. It is hoped to rendezvous with the French Navy, exchange Passports of Safe Passage and entrust the results of our scientific work with them for forwarding. The weather is expected to favour long beam reaches to this beautiful island group.

19 – 26 May Seven Day New Caledonia Sail. Following a day of training at anchor, the ship will sail around the coast, visiting some of the areas explored by Cook and others. The ship will anchor off the Isle of Pines discovered by Cook in 1874 before returning to Noumea.

More details on the voyage and applications will be on our website shortly.

The replica of Captain Cook's tall ship HMB Endeavour is managed by the Australian National Maritime Museum. Endeavour regularly sails in Australian waters and we keep a ship's blog to give you an insight into life on board.

View all posts by Endeavour Crew→
Posted in: Events , Vessels
↑