Miles away from my office at the Australian National Maritime Museum and the lapping waters of Darling Harbour, is my temporary workspace in the south east corner of the spectacular Jordan Rift Valley. Here, rimmed by ancient and multi-coloured mountains, the valley descends to the salty shores of the Dead Sea. At over 400m below sea level, this is the actual lowest place on the earth’s surface.

Despite the bare and beautiful mountains and a sea void of life, communities have flourished in this region for tens of thousands of years. The rich history of those people who have lived by the Dead Sea is now the focus of a brand-new purpose built-museum: The Museum at the Lowest Place on Earth. 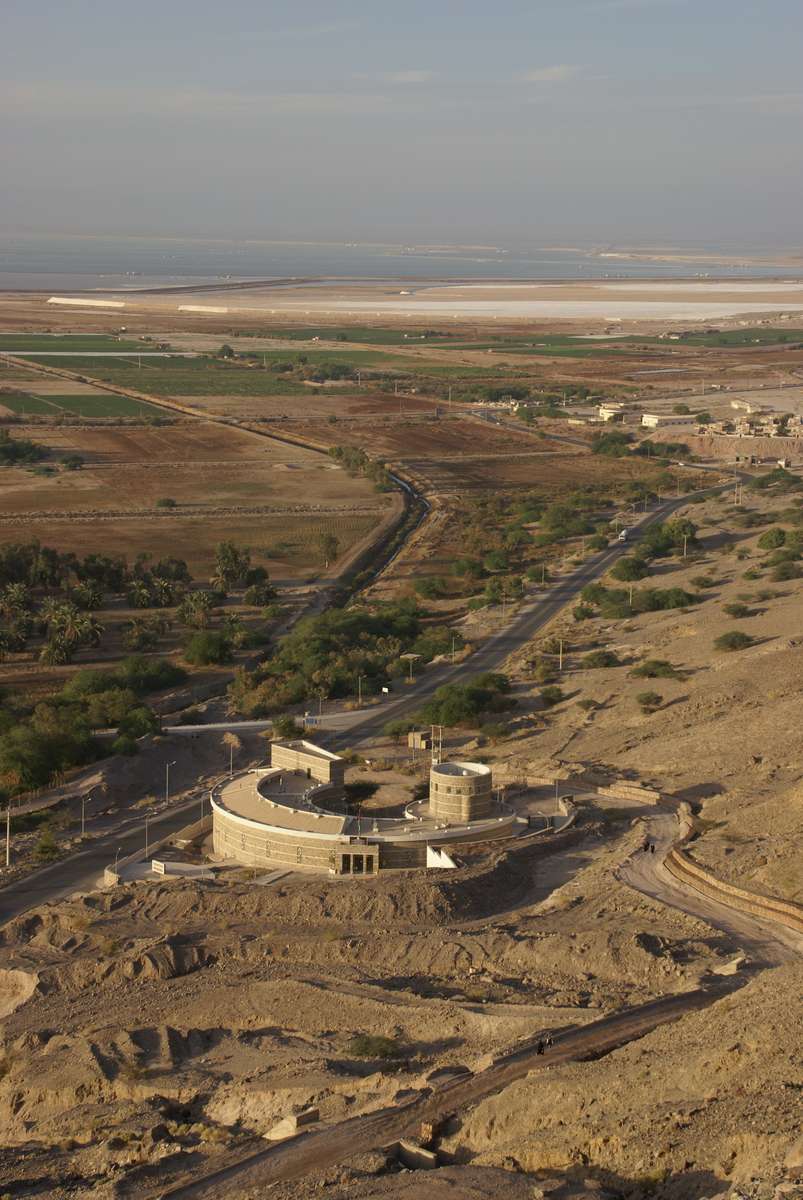 The Museum at the Lowest Place on Earth with the Dead Sea at its lowest point visible in the background. Photo: Peter Edwell 2013

I spent my Christmas at this museum, and for a person who loves history, this was a particularly unusual and wonderful place to be during the festive season (and your holidays). The Museum at the Lowest Place on Earth houses and displays some breathtaking ancient artefacts from the region, including tombstones and architectural pieces, textiles, rare pottery and beautiful jewelry. The museum also features a shop stocked with products made by a local women’s co-operative that is run with the assistance of Seattle-based artist Jean Bradbury (see also Jean’s great project Studio Syria, an art & education program for Syrian children in the Zaatari refugee camp, outside Amman, Jordan). In addition to this, the museum building also includes a large conservation lab and a number of rooms to accommodate visiting international professionals such as archaeologists, conservators and curators who support and work alongside the local staff. The Museum at the Lowest Place on Earth was my home for the month of December where I joined several archaeologists (mostly Australian) in excavating a nearby site, and processed the finds back at the museum.

The archaeological project, directed by Dr Konstantinos Politis, focuses on the ancient city of Zoara which lies beneath the modern village of Safi, about two hours drive south from Jordan’s capital Amman and two hours drive north from the famous site of Petra (think Indiana Jones). Zoar features in several stories of the Old Testament, most notably in Genesis 14 where it is named as one of the five Cities of the Plain that rebelled against the King of Elam. Zoar is also connected with the story of Lot and his daughters, who fled to this city after the destruction of Sodom (Genesis 19.22-23).

Aside from its better-known biblical connections, it is Zoara’s growth into a prominent city which is of primary interest to Dr Politis who is focusing on two sites: Khirbat ash-Shaykh ‘Īsā where archaeologists are excavating the city’s urban centre and the nearby Ṭawāḥīn as-Sukkar, which houses the remains of a significant sugar factory. The question of how such a large and industrious city developed at the base of a harsh mountain range and on the inhospitable shores of the Dead Sea is one of the central questions Dr Politis’ project seeks to answer.

The secret to life here (as anywhere) is finding the water. The Dead Sea dominates the landscape but with a salt content around 10 times higher than normal seawater, the sea itself supports no life. However from the tablelands above the Jordan Rift Valley, freshwater from perennial springs is funneled down the mountains through a series of wadis that fan out into alluvial plains at the eastern edges of the Dead Sea. This freshwater supply has created a rich alluvial plain at Ghawr aṣ-Ṣāfī and the region around ancient Zoara, sustaining life and industry for thousands of years. 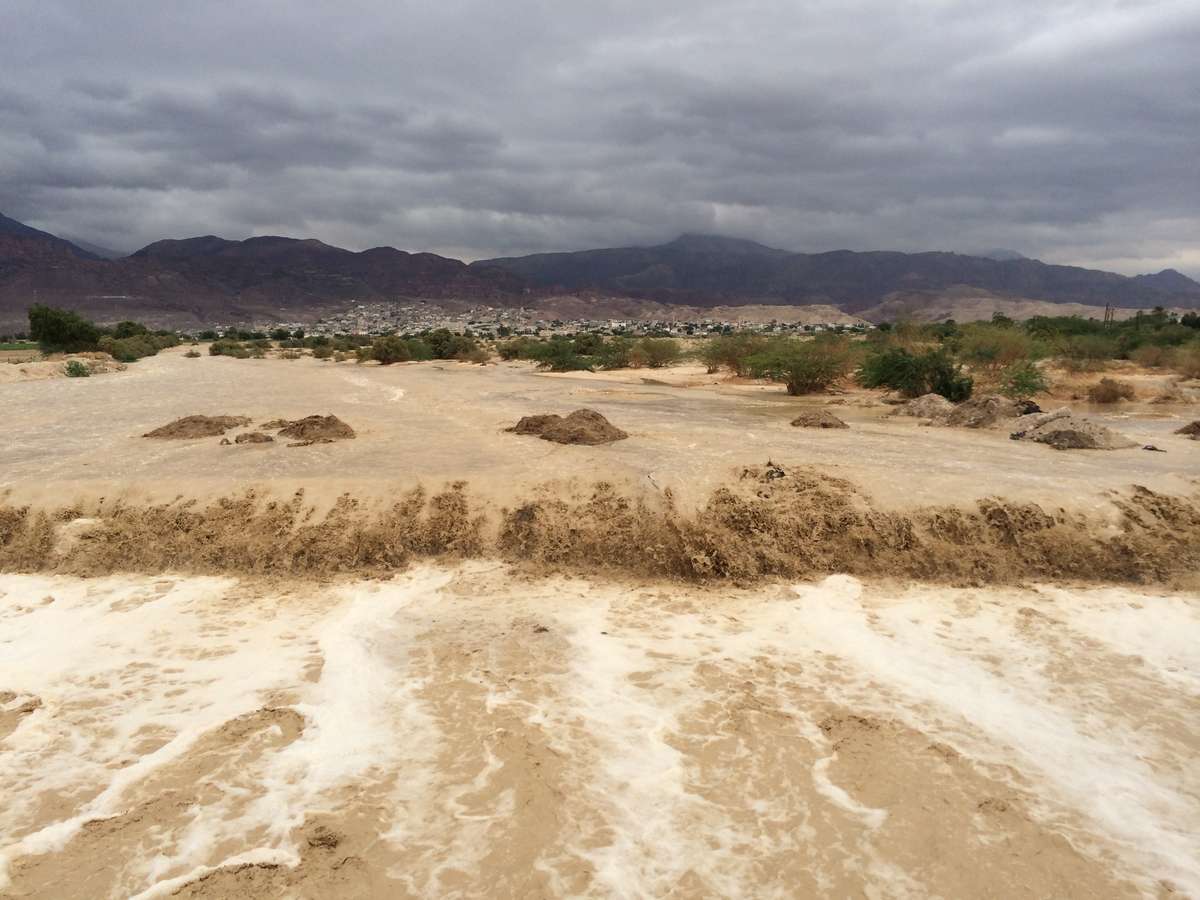 Overflow from the Wādī al-Ḥasā after rain, with the village of Safi seen in the background, December 2013. Photo: Peter Edwell

Evidence of farming settlements in the Ghawr aṣ-Ṣāfī region appear as early as the Early Bronze Age, 5,000 years ago, during the Iron Age 3,000 years ago as well as later historic periods. In Zoara however, the inhabitants of the area harnessed water not only to irrigate their crops, but also in the production of sugar, a lucrative and sophisticated industry that appears to have been a vital source of wealth for the city from about the 9th century to the 15th century AD. Interestingly, the sugar press at Ghawr aṣ-Ṣāfī appears to have been entirely powered by water, rather than animals as with other contemporary sugar factories. It is also the largest press found in Palestine and Transjordan, an area well-known for producing fine quality sugar during the 12th to 15th century.

The remains of the factory include an aqueduct that brought the water from the nearby Wādī al-Ḥasā, three presses (used to crush the sugar in the first step of production), crushing chambers and several subterranean vaulted rooms. The water was funneled from the wadi along channels under great pressure before being conducted into the two vaulted rooms where it powered the mechanisms to turn enormous crushing stones in the level above. It is believed that the vast amount of water used in this process then irrigated the extensive sugar cane fields beyond the mill. 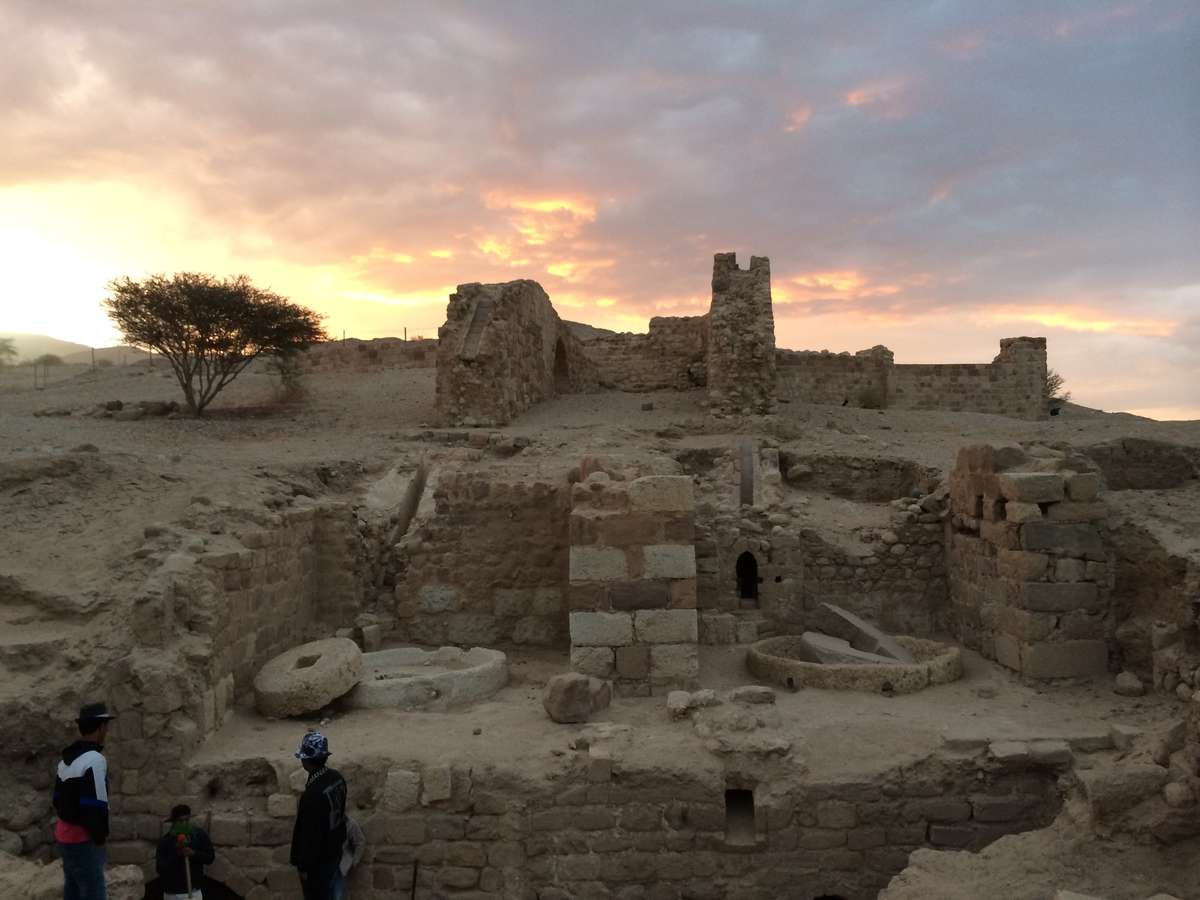 The sugar mill at Ghawr aṣ-Ṣāfī showing the east (l) & west (r) presses & their crushing stones as well as the water channels that funneled water down from the aqueduct into two lower vaulted rooms, powering the mechanisms that turned the stones. Photograph Peter Edwell 2013

Over at Khirbat ash-Shaykh ‘Īsā, working their way through layers in time, the archaeologists excavating the urban centre of Zoara are gradually revealing an impressive city with prominent city walls & gates, paved roads and large buildings. Further evidence of the sophisticated sugar-production industry has also emerged here, including dwellings for the workers and large-scale pot manufacturing. Smaller finds such as coins, burials and fine pottery provide detailed evidence of the lives of Zoara’s inhabitants and speak of the long and layered years of habitation there. 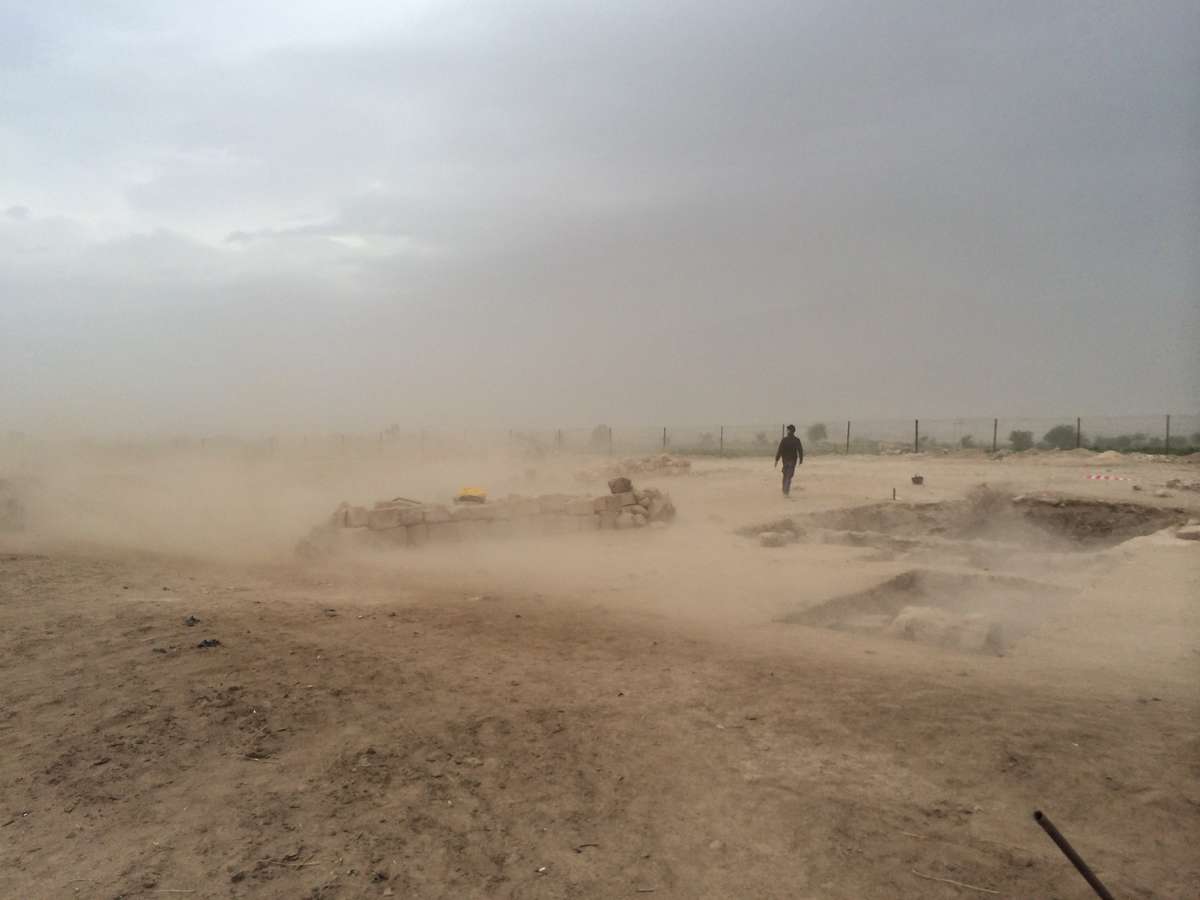 The modern village of Safi which has grown up near the ruins of Zoara is primarily an agricultural community, however tomato fields have replaced the ancient crops of sugar cane. The village uses the very same water source as ancient Zoara: the Wādī al-Ḥasā, where remains of a dam and conduit built by the Nabataeans around the time of the birth of Christ can be seen alongside the modern watercourse. Beyond the archaeological excavation the tablelands (now dusted with snow) are visible above pink-hued mountains that contain some of the oldest geology on Earth. Funnily enough the oldest layer of stone in the mountains, known as precambrian, is also found in another ancient landscape, a little closer to home: Australia. 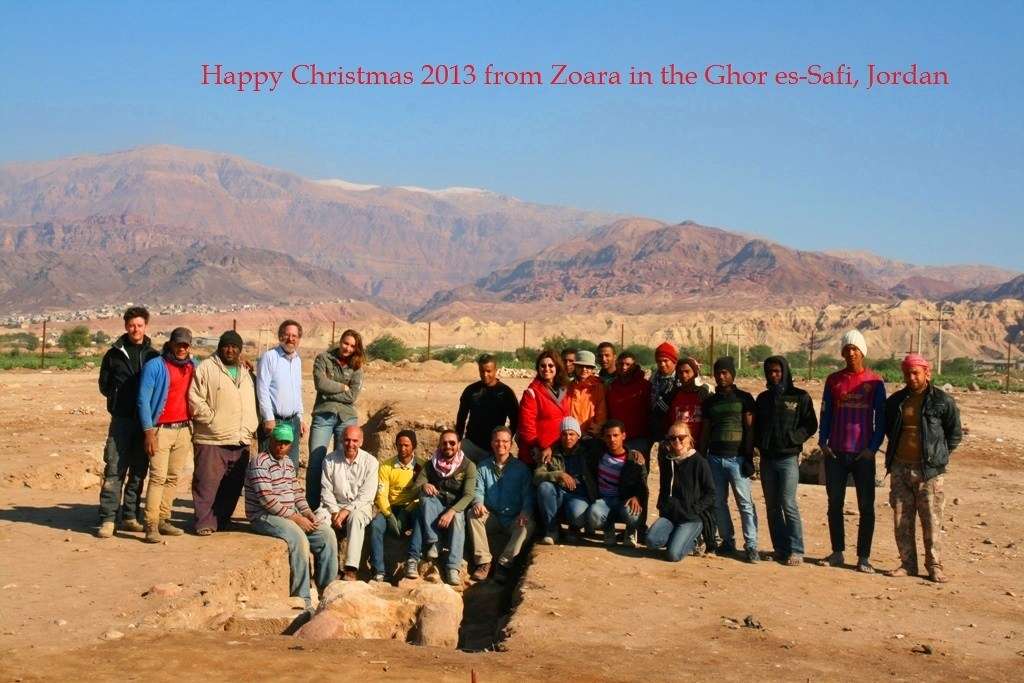 View all posts by Nicole and Penny→
Posted in: Arts and Culture
↑