Viking activity extended from Asia in the east to Greenland and North America in the west, and from the islands far up in the North Atlantic to the Mediterranean and northern Africa in the south. During the Viking Age, exotic and exclusive goods flowed into the Viking homelands in Scandinavia and were made available, for those who could afford them, at trading places such Birka, Hedeby, Kaupang and others. Along with the material goods came ideological, political and religious currents. 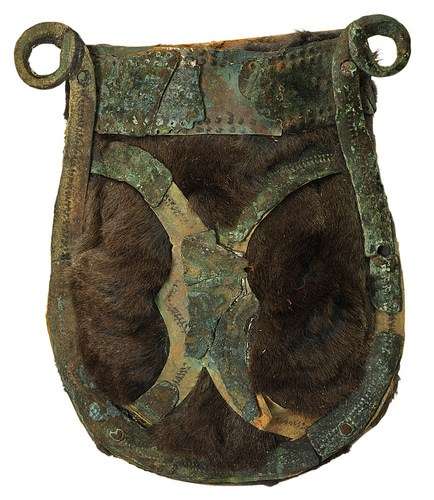 A bronze pouch made fom fur, bronze and paper, currently on display at ANMM.

Among the many exotic artefacts that have been discovered at Viking-Age sites are a Persian glass beaker, an Irish cross, an Indian statuette of the Buddha, a Coptic ladle from Egypt, and shells from the Red Sea and the Indian Ocean intended to be made into pendants. Such artefacts are evidence of what great melting pots many of the Viking Age communities were. Much of what we call ‘Viking-Age culture’ was in fact created from encounters between norrænir menn and other peoples.

Among the archaeological finds from this time are many hoards of silver. Silver was the predominant precious metal during the period; gold, which had previously been more prevalent, became less common in the Viking Age. Masses of silver objects and raw material ended up in the ground, testifying to the importance of silver in Viking-Age society. The largest find so far weighs an astounding 75 kilograms, though most are much smaller. The number of hoards found is constantly increasing. On the island of Gotland, where most of Sweden’s silver hoards have been discovered, there are new finds every year. We may never really know why people in these times buried their silver; some scholars believe the ground was considered a safe place to store valuables, but there may also have been religious reasons.

Some hoards contain only coins, others both coins and artefacts, and some artefacts only. Cut-up and divided coins are a frequent inclusion. Commodities were not paid for simply with a certain number of coins of a given value; it was the weight and silver content that were crucial, so coins were often cut up and divided to make up the correct payment. It was also common for people to check the genuineness of the silver by cutting a coin or silver object with a knife. 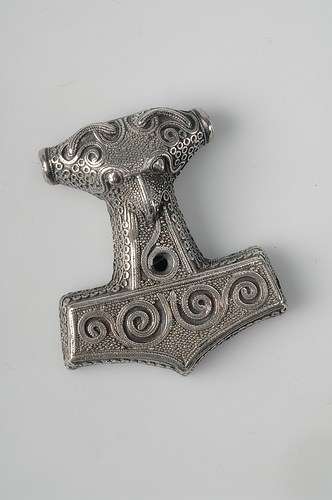 Viking-Age silver hoards are categorised by their composition. Hoards consisting of intact ornaments and brooches but lacking coins are sometimes called ‘women’s hoards’, or ‘theme hoards’, as they follow a strict theme: accessories for women’s dress, with the centrally worn trefoil brooch as the common denominator. The objects in these theme hoards vary in character and material, unlike the hoards consisting exclusively of silver objects. In contrast to the standardised silver hoards, theme hoards are not believed to have been used as money, at least not exclusively; in hoards containing a mixture of silver with glass beads and certain bronze objects, the silver has been interpreted as part of a payment received, unlike the other items.

Even if, at the moment of burial, the hoard was not intended to be used in trade again, it still had an inherent economic value, and was perhaps hidden away to be saved for future use. The ornaments in the hoard were of great value when they were buried, and it was a highly prosperous person in the 10th century who chose to place them in the ground.

Excerpt from: The age of Vikings: artisans, traders, slaves and buried treasure, Signals quarterly, published by the Australian National Maritime Museum, Edited by Janine Flew from essays by curators Gunnar Andersson and Kerstin O Näversköld and Associate Professor Fredrik Svanberg of the Swedish History Museum. Reproduced with permission. Gunnar Andersson’s book Vikings: Beyond the legend, which accompanies the exhibition, is available from The Store.

Become a Member of ANMM and receive a free copy of our journal, Signals, every quarter.