The global influence of a beloved brew

‘By the sea, drinking tea’, by researcher and former assistant curator Mariko Smith. From Signals 103 (June-August 2013).

Tea can be considered as the first global commodity for mass consumption, and the maritime industry was crucial to this achievement by transporting chests of tea between ports around the world. Key players in the supply and demand for tea included large multinational merchant companies in Europe, most notably the United Dutch East India Company (VOC) and Britain’s own East India Company, which dealt in important trade goods such as tea between the Far East and Europe from the 17th to 19th centuries. These companies played important roles in exploration and discovery as well as commercial trade. Ships of exploration and commerce, they can be all considered as vessels of change: they brought significant social, cultural, economic and political transformations to nations such as Britain and Australia, simply through importing this fragrant cargo. 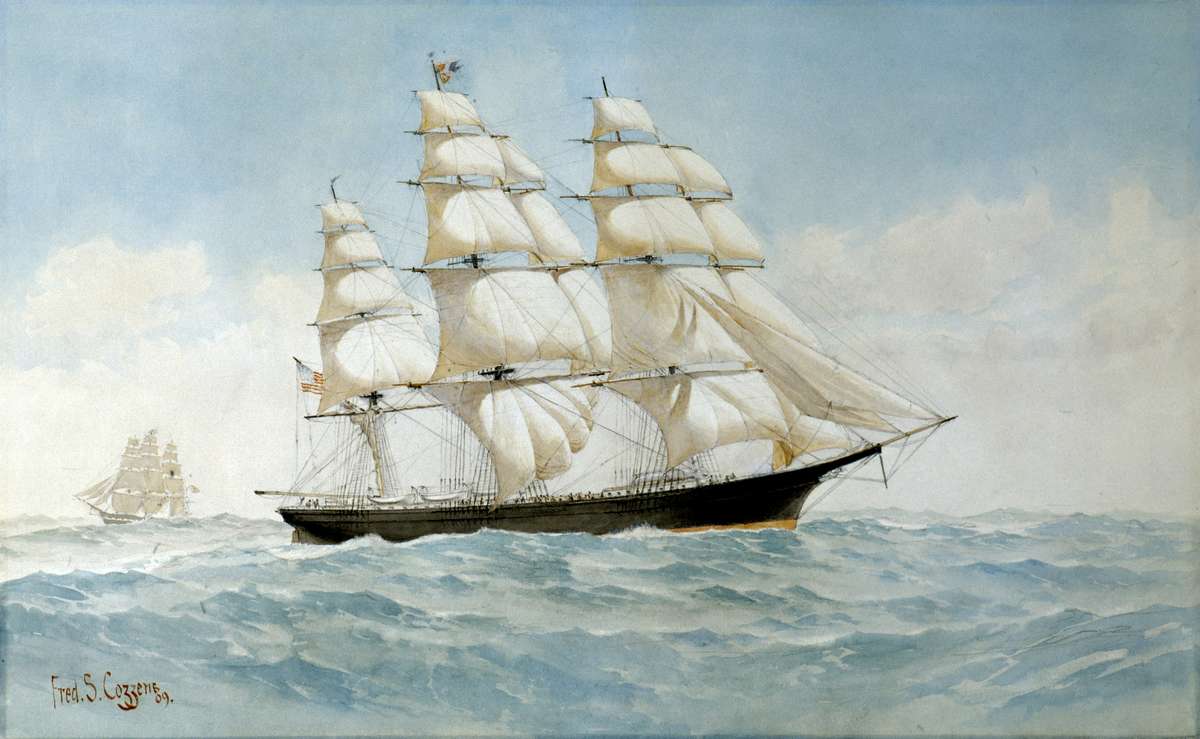 Flying Cloud, painted to be the frontispiece for ‘The Clipper Ship Era’ -Arthur C Clark.

According to BBC Radio 4’s In our time profile on tea in 2004, Britain’s trade in tea began with a modest official import of just two ounces (60 g) during the 1660s, and grew to an annual supply of some 24 million pounds (11 million kg) by 1801. By the turn of the 20th century it was one of the most widely consumed substances on Earth; rich and poor alike were sipping an average of two cups a day and every Briton was using on average six pounds (3 kg) of tea leaves per year. Tea’s ability to transcend class was not lost on commentators such as English merchant philanthropist Jonas Hanway, who warned European society in an essay written in 1757 that ‘your servants’ servants, down to the very beggars, will not be satisfied unless they consume the produce of the remote country of China’.

In 1773, the British Parliament passed the Tea Act, which gave the East India Company a monopoly on the tea trade between the British colonies, with the government retaining a three-pence-per-pound duty on tea for the privilege. Abigail Adams – eventually the wife of the second American president and the mother of the sixth referred to tea as the ‘weed of [British] slavery’. Anyone who allowed tea to be brought into American ports by company ships risked landing themselves in hot water (so to speak) with the locals, being deemed an enemy of America. On 16 December 1773 the protest culminated in some 90,000 pounds (41,000 kg) of British East India Company tea, valued at £10,000, being tossed by American patriots into Boston Harbor – a pivotal event in the American independence movement now known as the ‘Boston Tea Party’.

Tea seems to have had a more peaceful reception in the Antipodes. Beginning with its journey on the First Fleet in 1788, Australians developed a much-loved tradition of making a billy or a ‘cuppa’ in any season and for all sorts of occasions, very much in the attitude later embodied in the British wartime motto of ‘keep calm and carry on’. Australia’s love of tea – whether served hot with dainty scones baked by the Country Women’s Association, or refreshingly cold with ice and citrus slices at the beach, or inspiring many a nanna-knitted tea-cosy – continues to demonstrate strong cultural connections with Britain. 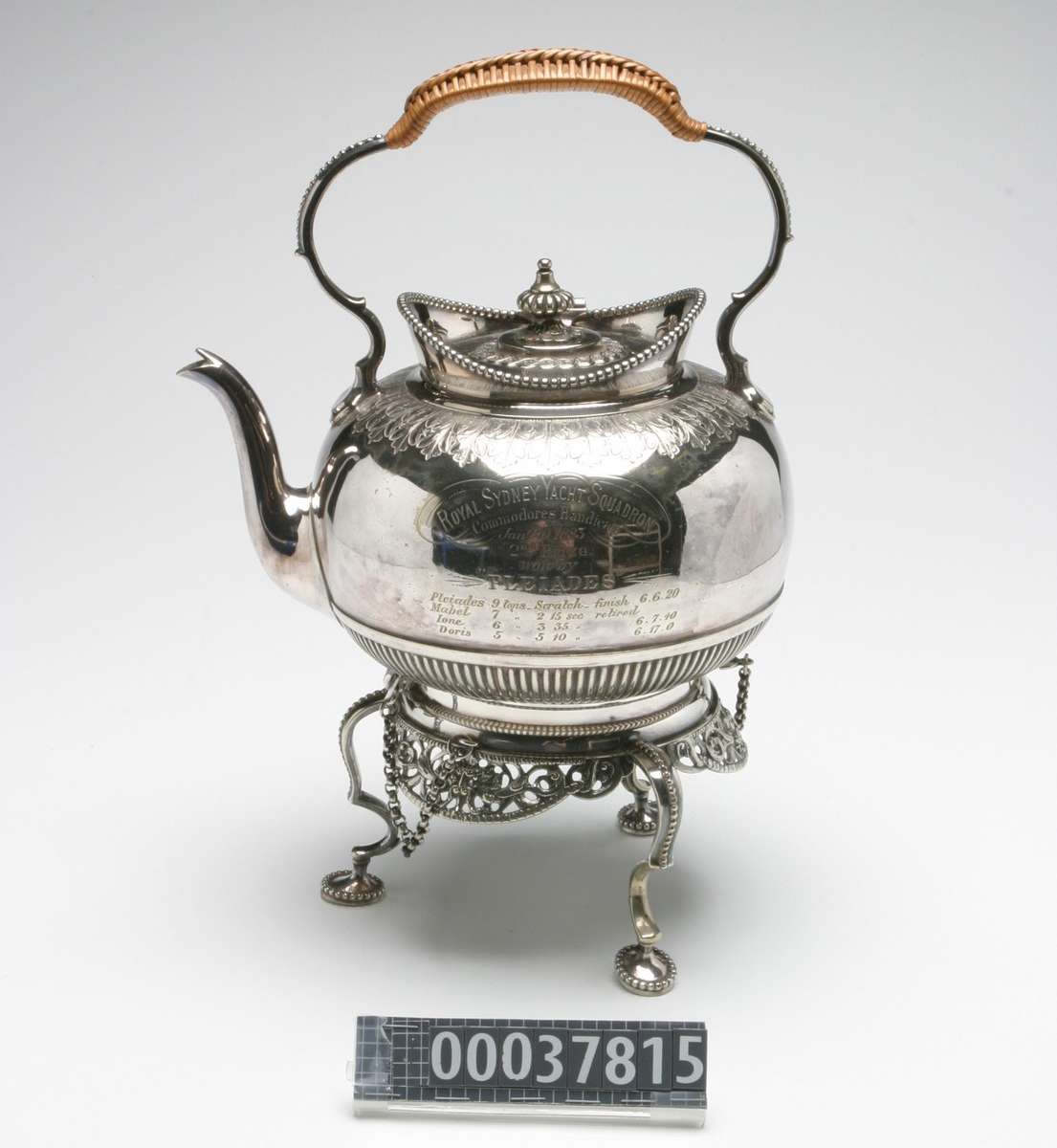 Regattas presented ideal occasions for people to gather and socialise, often over refreshments brought from home. Enjoying a cup of tea with some homemade sweet and savoury delicacies during these events wasn’t just a matter of satisfying one’s appetite – it was also a chance to reflect on and reinforce Anglo-Australian identities. With this in mind, I searched through the museum’s extensive database of objects that relate to travel, tourism, sport and leisure, and came across several interesting objects that provide a range of visual and contextual representations of tea in Anglo-Australian maritime heritage.

Most striking is a late-19th-century trophy in the form of an intricately detailed silver-plated tea kettle with wicker-wrapped handle on a silver stand. It was awarded to the nine-ton cutter yacht Pleiades for second place in the Royal Sydney Yacht Squadron’s Commodore’s Handicap race on 20 January 1883. Pleiades was designed and built by W Langford at Berry’s Bay in Sydney in 1874. Connections to trade and commerce are evident through its first owner E W Knox, son of the manager of Colonial Sugar Refining Co Ltd (CSR). In 1883 it was owned by Royal Sydney Yacht Squadron member F B Lark. 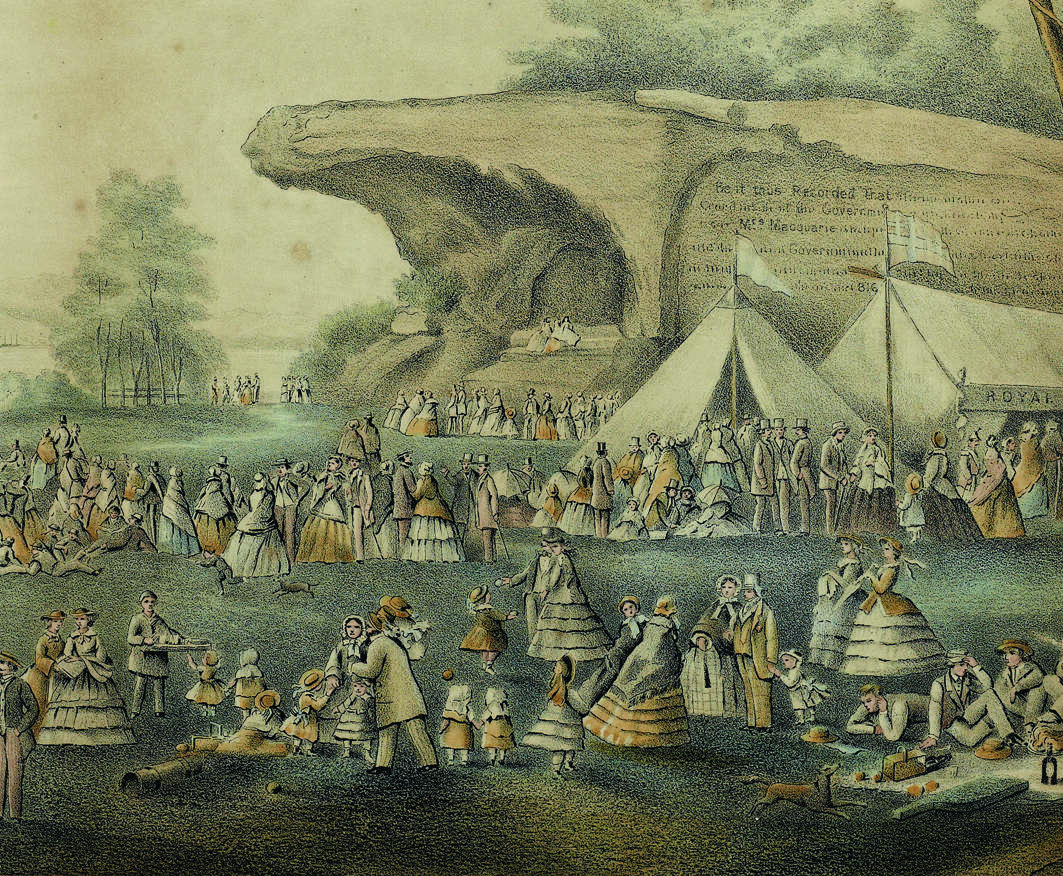 Picnic held at Lady Macquarie’s Chair Sydney N S Wales in 1852 is a detailed hand-coloured lithograph print from the 1870s, attributed to artist J Henderson, depicting spectators at a public picnic held during a sailing regatta on Sydney Harbour in 1852. The scene may be of an Anniversary Day Regatta, an annual holiday festivity held every year from 1836 to commemorate the establishment of the colony of New South Wales. Now known as the Australia Day Regatta, it is considered the oldest continuous sailing regatta in the world. The picturesque rocky headland known as Mrs Macquarie’s Chair, located in today’s Domain, was a popular vantage point for crowds of all classes to enjoy picnics and watch regattas. This scene shows groups of men, women, children and even their pets enjoying a day by the sea, picnicking and cavorting in groups on the foreshore and clustering around tents set up for entertainment and refreshments that most certainly included tea.

View all posts by Guest→
Posted in: Arts and Culture
↑