When I first came across this photo of Commander Henry Stoker and Lieutenant Geoffrey Haggard of the AE2 submarine in the museum’s collection, I was struck by how confident and relaxed both men look, quite different to other military portraits I had seen. 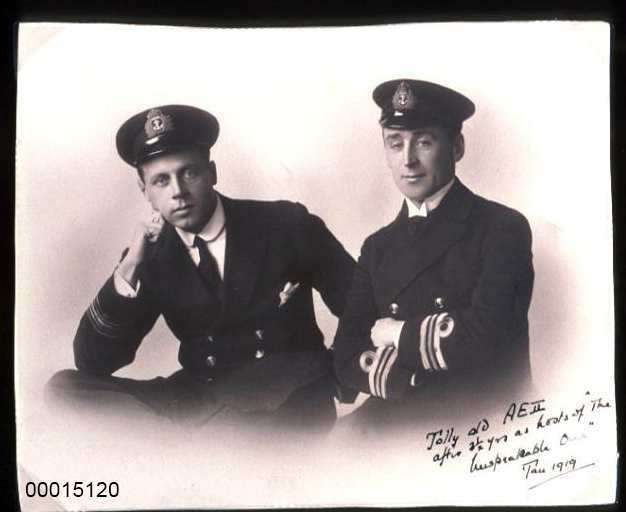 Lieutenant Geoffrey Haggard and Commander Henry Stoker who were responsible for taking the AE2 through the Dardenelle Straits and into the Sea of Marmara in April 1915..

Once I looked into the story of the AE2 I began to think of the extraordinary experience these men had shared side by side. They had bought the AE2 out from England together just prior to WW1, at the time the longest voyage ever undertaken by a submarine. So confident in his crew and sub, it was Stoker who argued in April 1915, that the AE2 could breach the Dardanelles and enter the Sea of Marmora, despite previous failed Allied attempts. The Admiralty gave authority to do so and the general order to ‘run amok’.

All the crew must have felt the trepidation and fear as they entered the Dardanelles, being hunted by Turkish forces from above, and the quiet jubilation of entering the Sea of Marmora. But the disappointment and agonizing decision to sink the submarine must have been particularly wrenching for Haggard and Stoker.I can only imagine the frustration and despair as they realized there was no way out.The two men managed to save the lives of the rest of the crew and were the last to leave the AE2 as she was scuttled. By one account, they escaped only just in time.

If the photo was taken, as it is dated, in 1919, Stoker and Haggard had by then spent 3 ½ years as prisoners of war in some of Turkey’s harshest prisons. It is recorded that Stoker in particular attempted numerous escapes and was brutally punished for it.

Both men were awarded for their bravery during the Dardanelles mission and yet both went on to live very different lives. Haggard moved to Australia and after serving as aide-de-camp to the Governor of Victoria he became a successful livestock farmer in the Yarra Valley with his wife and three children. He was tragically killed in an accident in 1939 just after receiving his posting to Singapore for the Royal Navy.

Stoker pursed a career in film and theatre and although he was recalled to serve during WWII he did not stay in the navy once the war ended. Instead he continued acting and became an accomplished sportsman playing, tennis at Wimbledon and becoming the Irish Croquet Champion.

I do wonder if Stoker and Haggard ever saw each other again after the war or if they ever spoke about those incredible days in the Dardanelles and the enormity of what they had achieved.

The story of Commanders Stoker and Haggard will feature in an upcoming exhibition at the museum Test of War – Royal Australian Navy in WWI. The exhibition will follow the establishment of an Australian Navy from 1913 and its baptism of fire from 1914 to 1918 in WW1. It is due to open in time for the centenary of the beginning of the war in September 2014.

View all posts by Myffanwy Bryant→
Posted in: From the collection , Navy and defence
↑