Back to where it all started and a mystery…

After an exciting trip back down from the Great Detached Reef – Silentworld II and its full time crew headed up by Captain Michael Gooding responded to a Mayday call on late Thursday evening and rescued two professional fishermen from their sinking fishing vessel north of Cooktown – the team arrived off Flora Reef, south of Cairns on Friday morning.

Flora Reef is the location of HMCS Mermaid, the former surveying vessel of Phillip Park King, which was wrecked whilst on voyage from Sydney (New South Wales) to Port Raffles (now in the Northern Territory) in 1829. After several searches the wreck site of the Mermaid was located and surveyed by the Silentworld Foundation and the Australian National Maritime Museum in 2009 in the first, of what has turned out to be many, successful underwater archaeological research projects. 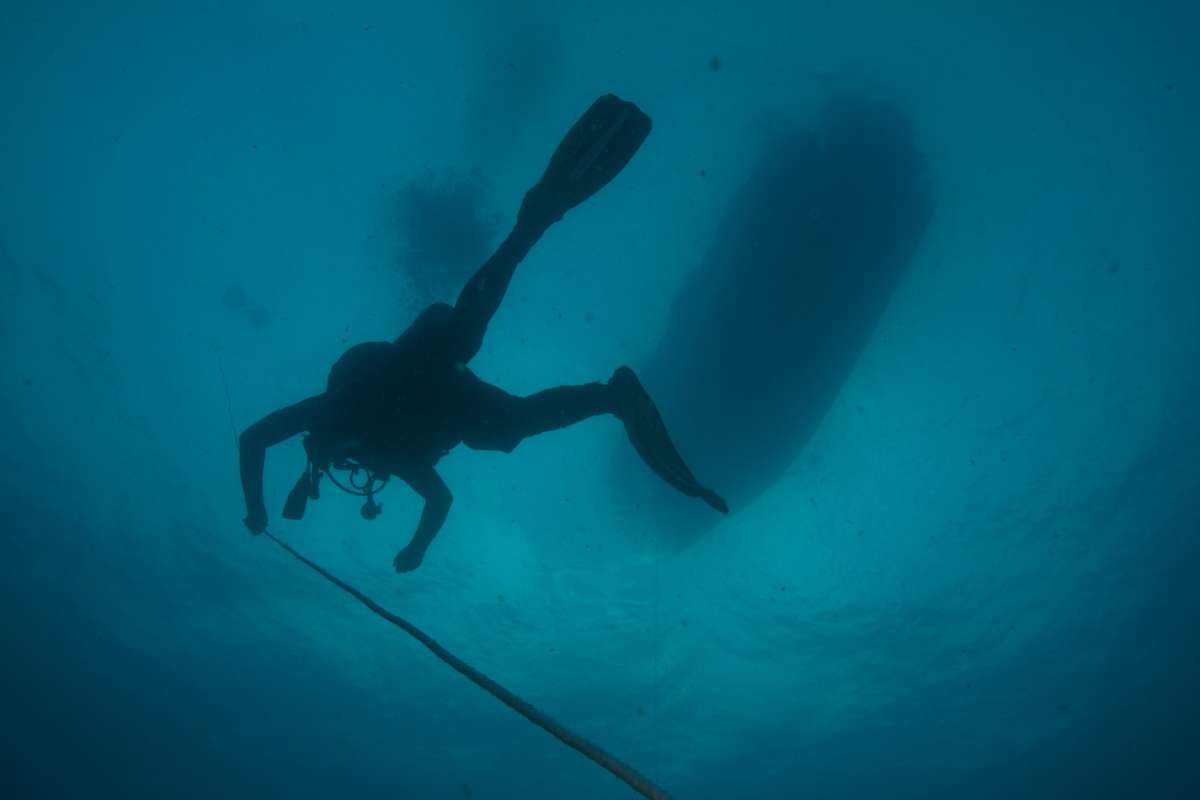 Flora Reef is also close to the site of, an as yet unresolved mystery, dating back to 1943.In February 1943 the Royal Australian Air-force Catalina A24-25 from 11 Squadron RAAF – went missing off Cairns whilst returning from an anti-submarine patrol – the last garbled message from the aircraft – which was received at Townsville contained the words ‘Force land’. Because the message was received at Townsville rather than Cairns and because of eyewitness accounts from soldiers at a military installation on one of the islands south of Cairns the aircraft was presumed to have crashed near the Frankland Islands. Despite an extensive search the aircraft was not located and the crew of 11 presumed lost – missing in action. 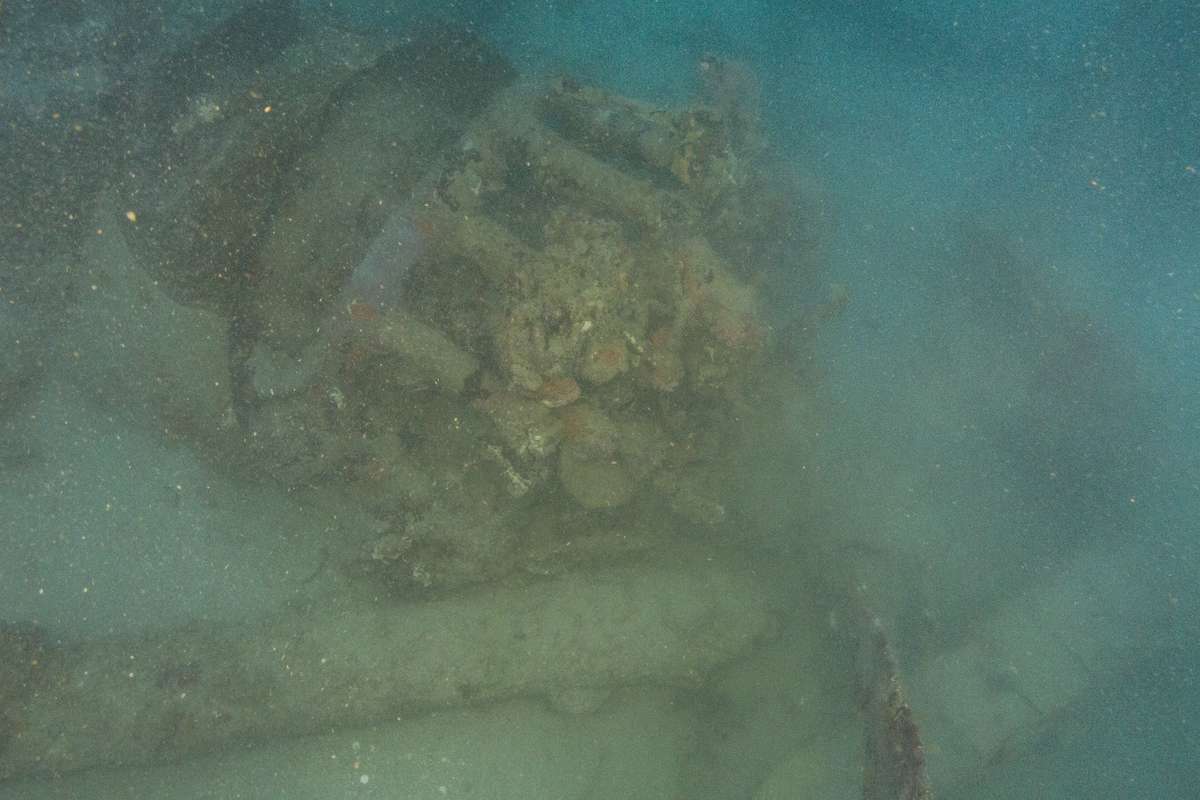 But murky on the bottom. PHOTO: Xanthe Rivett, Silentworld Foundation.

In early August 2013, Kevin Coombs, a recreational diver from Cairns reported his discovery of a sunken Catalina flying boat in deep water off Flora Reef to the Queensland Department of Environment and Heritage Protection.   Hearing of the discovery Peter Illidge from the Great Barrier Reef Marine Park Authority, working in conjunction with the Silentworld Foundation, and at the request of the M.I.A. team at the RAAF undertook to investigate the site as part of the November expedition.

Once at Flora Reef the plane site was quickly located, a shotline placed on the site and a decompression station established underneath the Hydra-sport.

The first dive team in were Frits (who amongst his many skills is also a deep-water technical diver) and John from the Silentworld Foundation. They confirmed the shot was safely located just to the south of the site, that the site was that of a large aircraft and that the site was badly broken up. 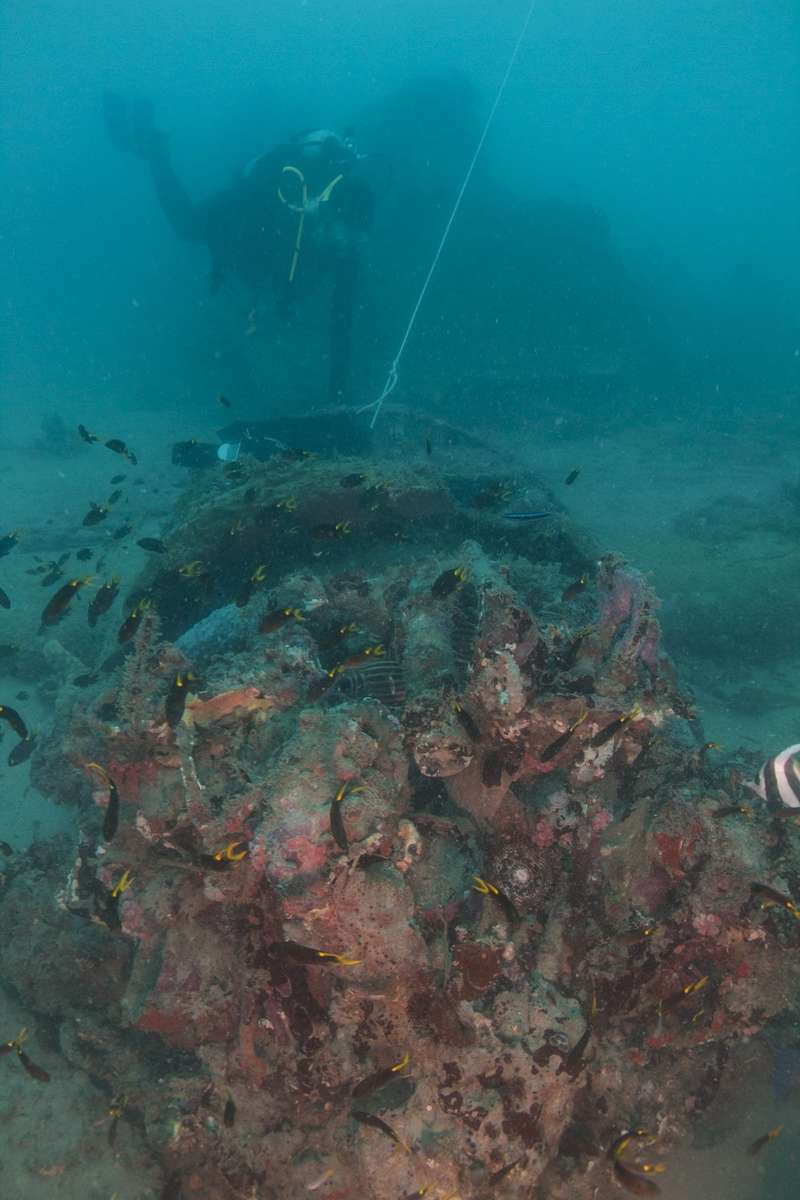 The second dive team in, consisting of Jacqui from the Silentworld Foundation and Xanthe Rivett quickly videoed and photographed the site (the total allowed bottom time was 7 minutes) before returning safely to the surface.

The third and fourth teams – consisting of Peter Illidge (GBRMPA), Glenn and Trevor (Silentworld Foundation) and Kieran commenced measuring the site to confirm its identification as a Catalina and to also to start the search for the aircraft’s three identification plates in order to confirm which Catalina, out of the dozens that were operating off far north Queensland waters, it was.

After the required four hour surface interval (the build-up of the gas nitrogen in the blood during diving not only limits the amount of time a diver can spend on the seabed but also regulates how quickly they can dive again) the teams once again dived on the site searching the plane and the seabed for the identification plates.