Another perfect day on Great Detached Reef – seas almost mirror smooth – with only a slight breeze from the north – however a 20-knot change from the south-east is predicted to come in sometime in the late afternoon which will make diving on the outer edge of the reef difficult if not impossible – so it is time to get cracking.

Two dive teams away nice and early from the back of Silentworld II – Dive Team One, consisting of John, Peter and Xanthe headed south across the lagoon to exam some possible shipwreck sites that Bungee in his helicopter had seen the day before and Dive Team Two, made up of Frits, Meri, Jacqui, Rob, Kieran and Michael heading south east, also across the lagoon, to the site of the Charles Eaton. 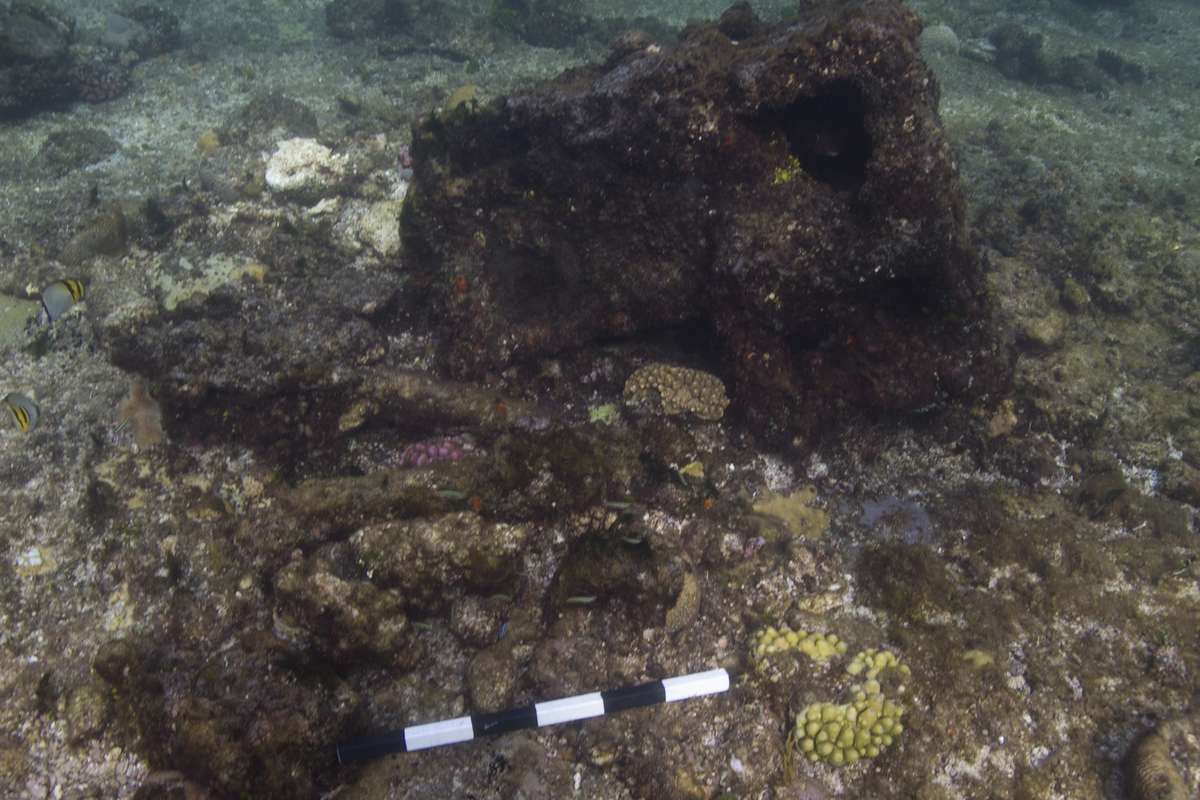 The Charles Eaton was a 313 ton, three masted, wooden barque under the command of Captain J.G. Moore when it was wrecked on a speculative voyage to India in 1834. On board the vessel were Captain William D’Oyley of the Bengal Artillery, his young family and several other passengers. The vessel struck the eastern edge of the Great Detached Reef and some of the crew deserted in the only serviceable boat leaving the passengers and remaining crew stranded on the wreck. The survivors built a small raft on which they successfully sailed to the mainland but unfortunately they encountered a group of Aboriginal people who killed all the survivors except for a young crewman called John Ireland and two year old William D’Oyley – they were subsequently rescued two years later by Captain Lewis of the schooner Isabella – by which time young D’Oyley had become completely assimilated into an Aboriginal family and could no longer speak English. 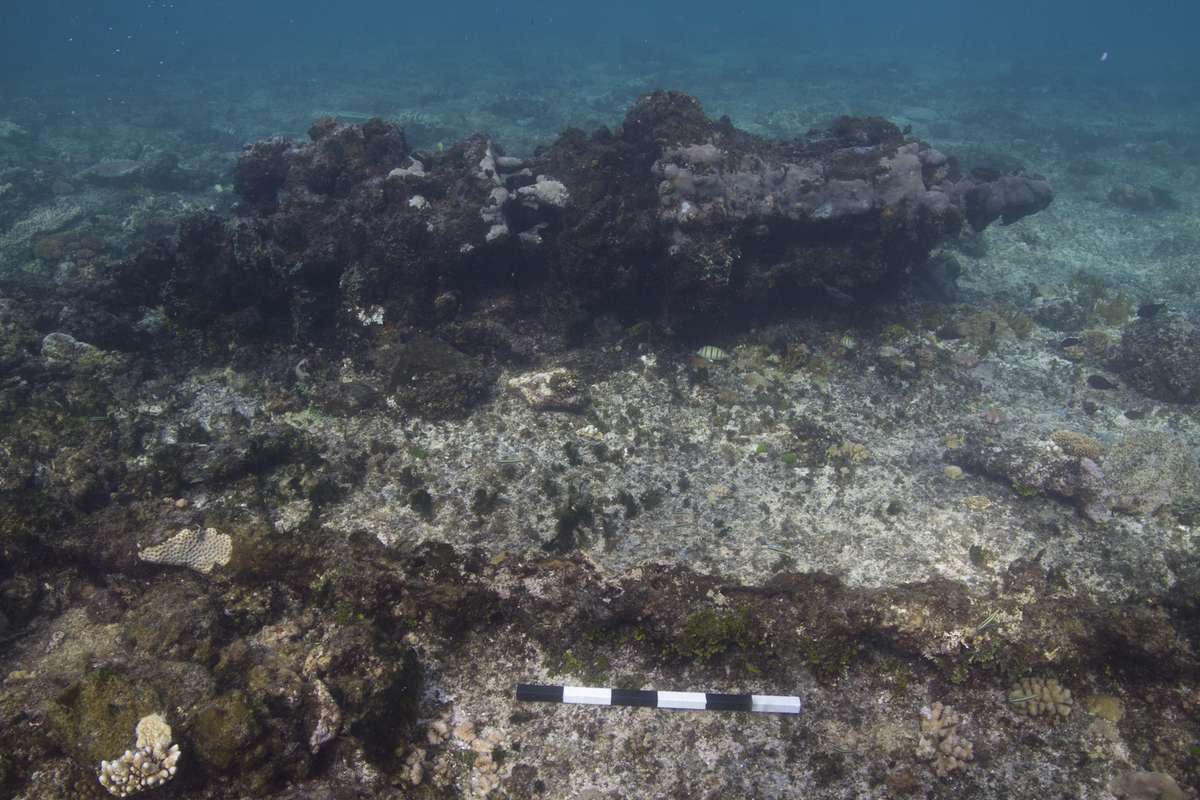 Like many of the other wrecksites on the Great Detached Reef the Charles Eaton is a linear site running from south-eastern reef edge across the reef top towards the north-west (the direction of the prevailing wind).

The southern end of the site is marked by a distinctive groove in the reef edge which is littered with iron kentledge and several lead ingots, following the groove across the reef flat the divers observed more iron and stone ballast, runs of stud link chain, several iron anchors, a large windless, iron staple and hanging knees and at the northern end of the site a small iron stove. Scattered along the way divers also noted copper-alloy and remnants of iron ship’s fastenings.

Keeping the same teams and same tasks as yesterday – the dive team quickly measured and surveyed the site before moving onto the second wrecksite colloquially named ‘Pete’s Pile’.

This site was located on the south-eastern edge of the eastern elbow and was located by Peter Illidge, Fritz and John the previous day. It consisted of a sizable timber and iron windlass, several runs of anchor chain running across the reef top and a large stone and red brick ballast pile on top of the reef flat. Although we could not locate them – the magnetometer hits indicated the presence of several large iron objects – most likely anchors – out in the deeper water to the east of the reef.

Whilst Dive Team Two was being kept busy on the two sites near the eastern elbow Dive Team One had investigated several sites on the southern end of Great Detached Reef including an single isolated, but remarkable intact, 19th century windlass, two picked in anchors – possible associated with the wreck of the Fatima and several runs of chain across the reef. 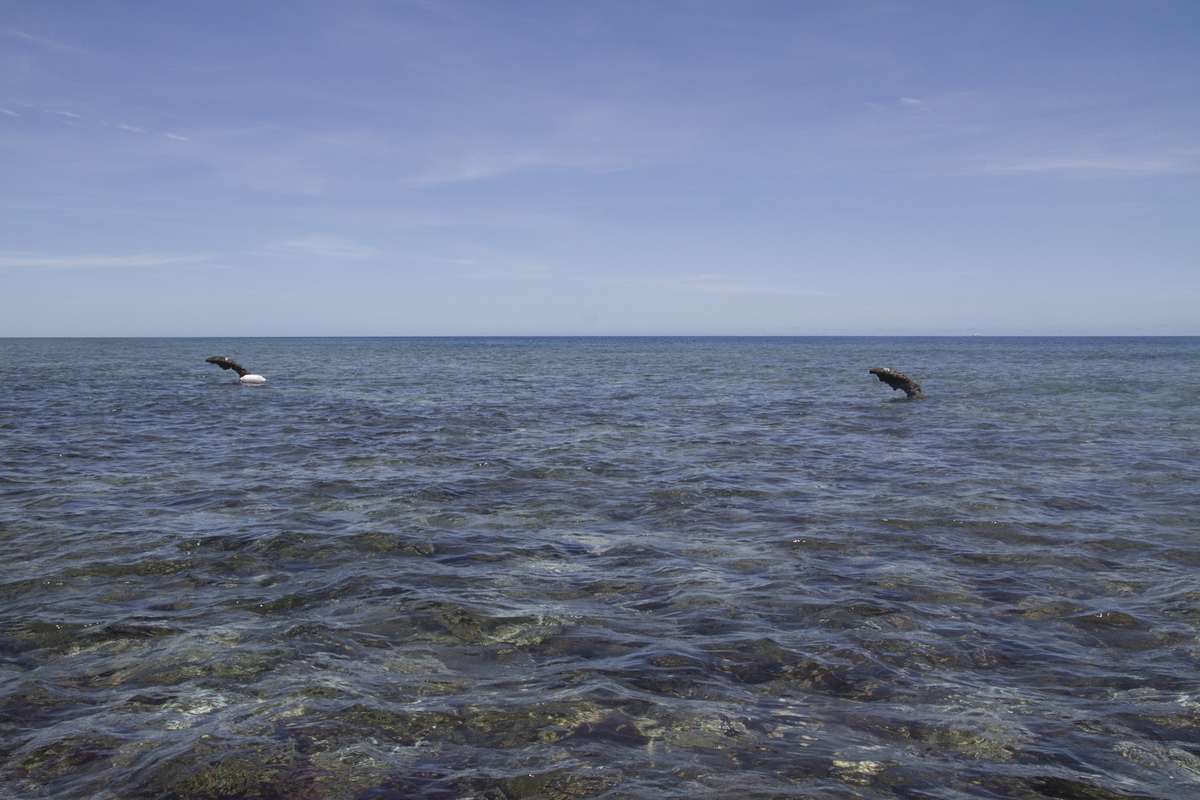 With the weather predicted to change we decided to wrap up our work on the Great Detached Reef –for the time being – and make a run down to the Franklin Islands south of Cairns to investigate the remains of another World War Two aircraft.