With Bungee searching the reef from overhead we sent out Xanthe, Rob, Meri, Frits, Jacqui, Kieran and Michael to commence surveying the buoyed shipwrecks starting with the one on the northern arm of Great Detached Reef.

This site consisted of a single iron anchor out on the edge of the reef on the other side of the surf break, two large mid-19th century iron anchors – one lying flat on the seabed the other picked into the reef top some 120 metres in from the edge of the reef. Surrounding these substantial anchors (4.0m long by 2.8m wide) are several lines of stud link anchor chain running in a north-westerly direction from the edge of the reef across the reef top and towards the centre of the site. Around the anchor chains are large iron concretions (an iron / sand / corrosion product matrix), a number of copper-alloy fastenings, copper-alloy sheathing (a metal coating used to protect the lower hull of timber sailing vessels from fouling and marine borers). 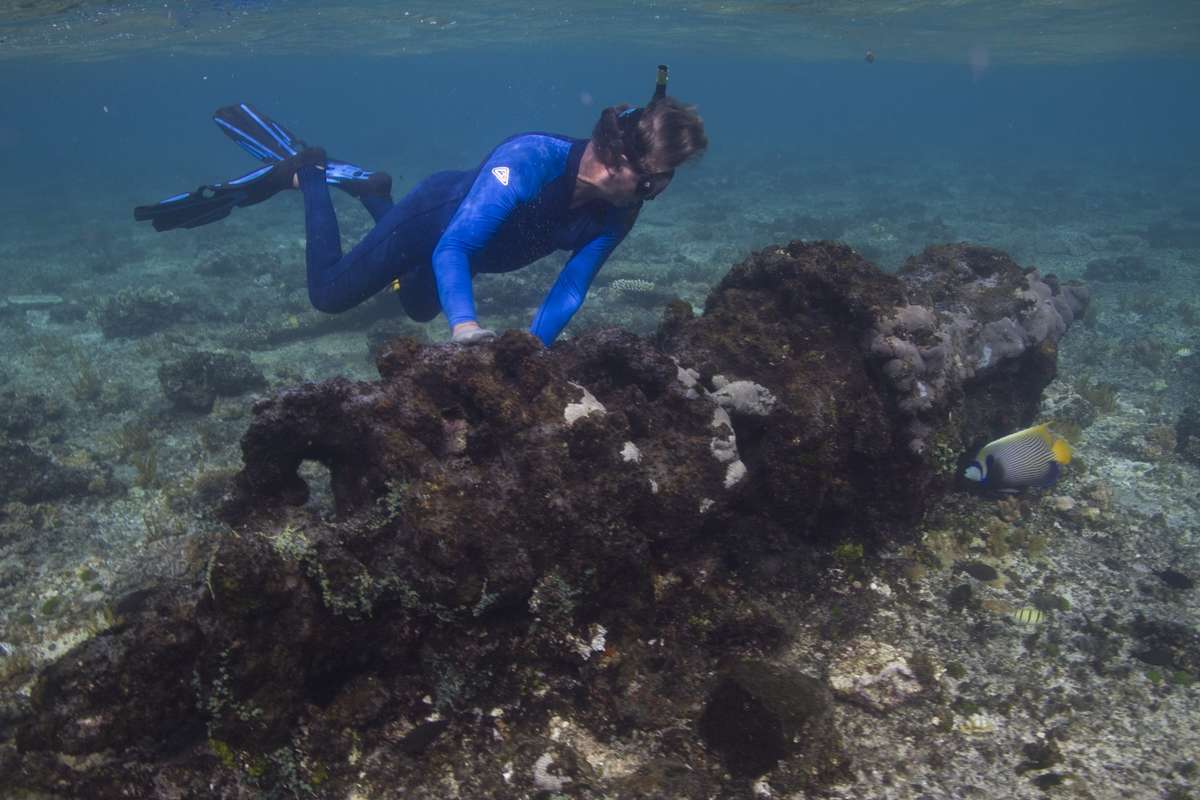 Scattered forward of the two anchors are several composite piles of chain, stone ballast and iron knees and rigging components – the largest mound being some 5.0 metres long, 2.0 metres wide and 1.5m high.

After a quick tour of the site the team split into working groups – with Xanthe photographing and videoing the wrecksite, Frits and Meri recording the large anchor lying flat on the seabed and the iron knees, Jacqui and Rob recording the pitched in anchor and the chain and Kieran getting compass directions and sketching a rough site plan. 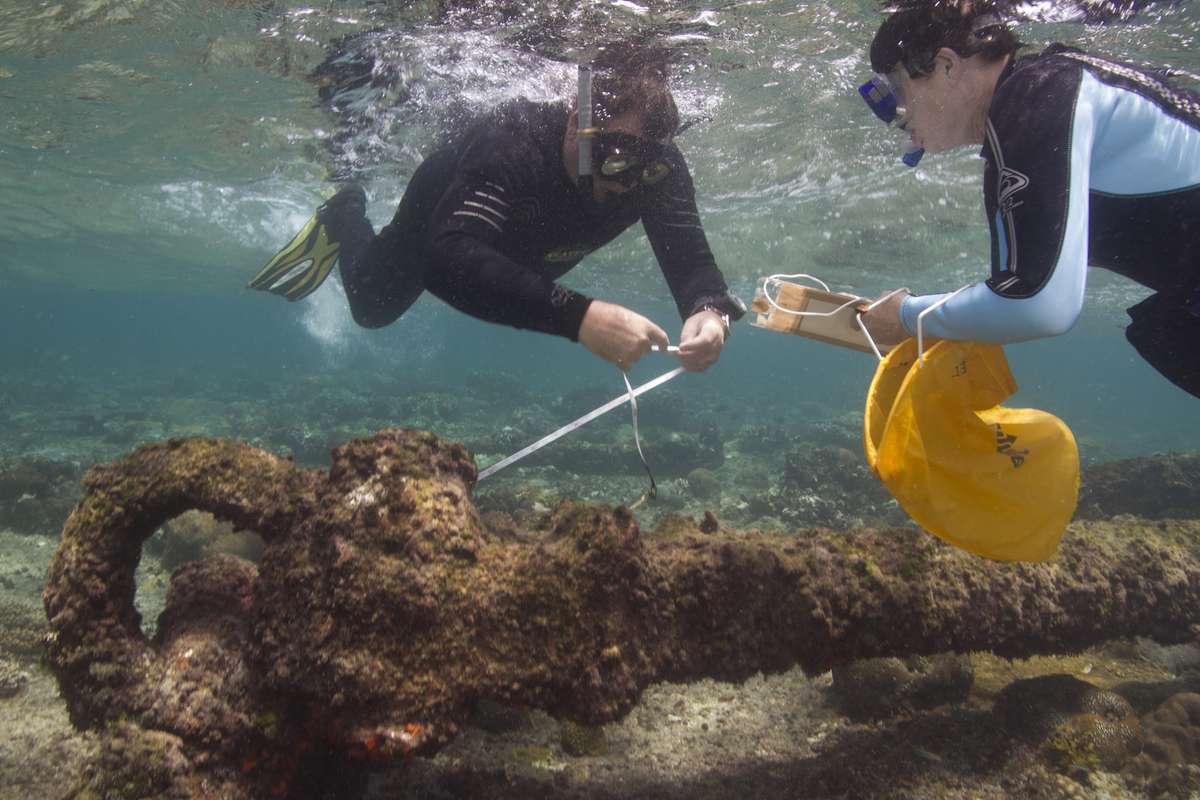 After completing the survey the team moved onto the next wrecksite about two kilometres south on the eastern elbow of the reef.

This site – which is situated on a shallow reef flat some 150 metres back from the exposed reef edge – runs in an almost straight north –south line across the reef top – and consists of a cluster of five relatively small iron anchors, two small carronades (a type of early 19th century cannon) and several pieces of iron kentledge. On the eastern side of the site the team located three small chain piles along with additional iron kentledge and to the north recorded a large, but, dispersed stone ballast mound and a small number of iron knees.

At the extreme northern end of the site was another large iron anchor which had been formerly fitted with a wooden stock. Judging by its angle and alignment this anchor appears to have been deployed during the wrecking event, unlike the sites five other anchors, which are piled up one on top of each other and are all facing different directions. 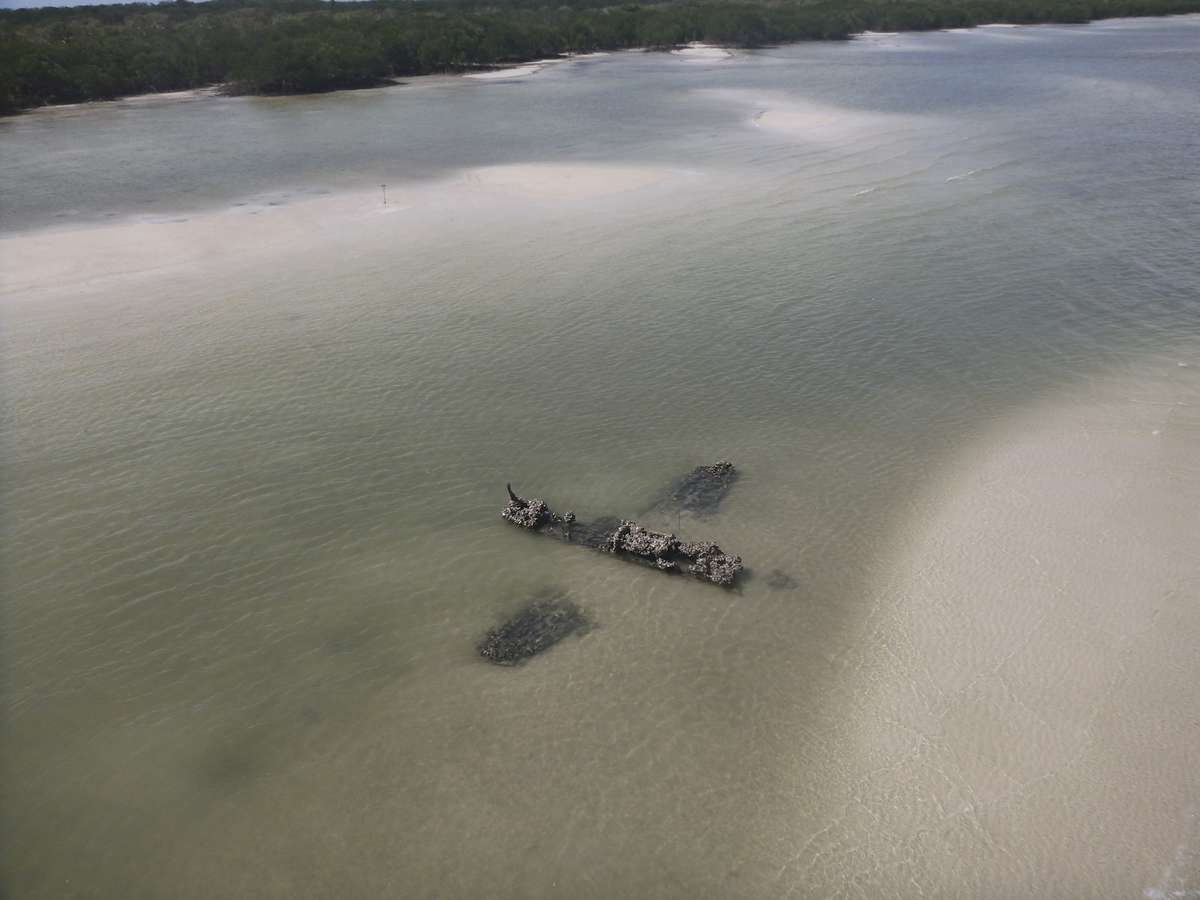 Again the team dispersed to their assigned tasks before returning to the dive tender and their next target – a large run of anchor chain and another large anchor which had been picked in – or deployed – in the centre of the reef.

Once the site was located Jacqui and Kieran snorkelled the length of the chain – which also ran in an almost north-south direction – looking for any additional  wreckage associated with the anchor and chain – after swimming the length of the chain – some 200 metres – no more wreckage was located and we returned to measure and record the upright anchor before returning to Silentworld II.