Conditions are remaining perfect for diving with the weather forecast predicting very light easterly winds for the next five to six days – with such great conditions all dive-tenders were away early from the stern of SWII heading for Wreck Bay – a few kilometres south and east of the anchorage.

The two Silentworld Foundation dive-tenders arrived on site and whilst the smaller Carib checked out the shallows and beaches for any crocodile activity the dive teams got ready to enter the water from the larger Hydra-sport. 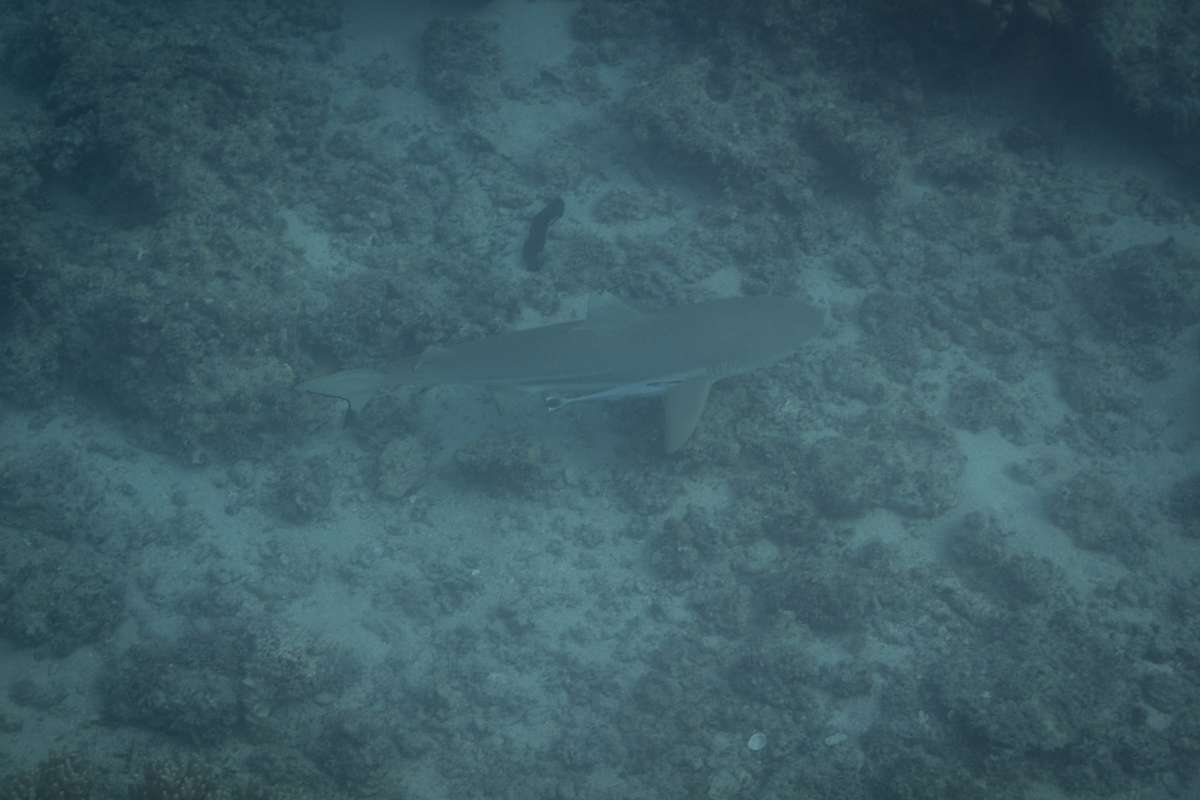 Peter from GBRMPA and I entered the water first – down one of the buoys marking the larger of the magnetic anomalies – and we commenced a circular sweep of the seabed using the metal detectors searching the shallow sand and weed patches, areas of broken coral and larger intact expanses of staghorn and plate coral for any signs of the Frederick.

After going over the area several times and with our bottom-time up we returned to the surface and the next dive team – consisting of John and Jacqui from the Silentworld Foundation – entered the water – the process was repeated several times with negative results.

Given the very positive results of the April 2013 magnetometer survey which indicated a series of large anomalies running from the deeper waters of Wreck Bay towards the north-western end of the Bay (the direction of the prevailing winds) – we decided to get Frits from Seasee Pty Ltd – to re-mag the entire area of Wreck Bay to see if the team could replicate the original mag results.

Piling the magnetometer fish, tow cable, batteries, computer, associated power cables and global positioning system into the Hydra-sport along with Frits, John, Peter and Glen commenced magging running a series of search lanes from north to south sweeping along the shore – after 30 so minutes the survey not only confirmed the location of the anomalies but also locate several more in an almost direct SE – NW line in towards the beach.

With the anomalies confirmed John and Jacqui prepared to dive and then commenced a series of circular sweeps out from one of the marker buoys – and then after the current started to pick up with the change of tide started to work along the edge of the reef in 6.0 to 8.0 metres of water.

With their bottom time used up they were replaced by Peter and Kieran who continued working the reef edge and then later a series of survey sweeps running from north to south – but like John and Jacqui they also could not locate what was causing such a large magnetic signal.

The team departed the anchorage at 0730 heading for Wreck Bay – determined to metal detector along the beach before the arrival at 0900 of a Robinson R44 Flipper Two helicopter which the Silentworld Foundation had chartered to assist us in the search for not only the very elusive Frederick shipwreck but also to allow Peter from GBRMPA to access and survey several WWII aircraft wrecks which were reported to be lying in shallow water on the mainland just north of the Stanley Islands.

Despite much consulting of tide tables and various predictions based on visual observations the tide – even at low tide – was still too high for us to get into the beach to carry out survey water amongst the mangroves and we returned back to the main anchorage on the western side of Stanley Island.

Bungee from Bungee Helicopter Charters arrived just after 0900 and after safety instructions bundled Frits, Jodie from the Silentworld Foundation and Kieran into the helicopter and we then took to the sky to photograph Wreck Bay from the air and also fly over to Princess Charlotte Bay to record the very remote memorial and gravesites associated with a terrific cyclone which caused the loss of more than 50 pearling vessels and 400 lives in 1899.

After 30 minutes in the air we returned to Wreck Bay and had another go at locating the magnetic anomalies – a tape was placed between another set of buoys – weighted and then dropped onto the bottom. Two divers (Peter and Kieran) then descended to the bottom and using the tape as a guide first methodically swept the sea bed on the southern side of the tape before doing the same on the northern side. After Peter and Kieran’s bottom time was up they were replaced by John and Jacqui who went over the same area again – this time working across the tape from east to west – unfortunately neither team located any magnetic material or other cultural material associated with the wreck of the Frederick. 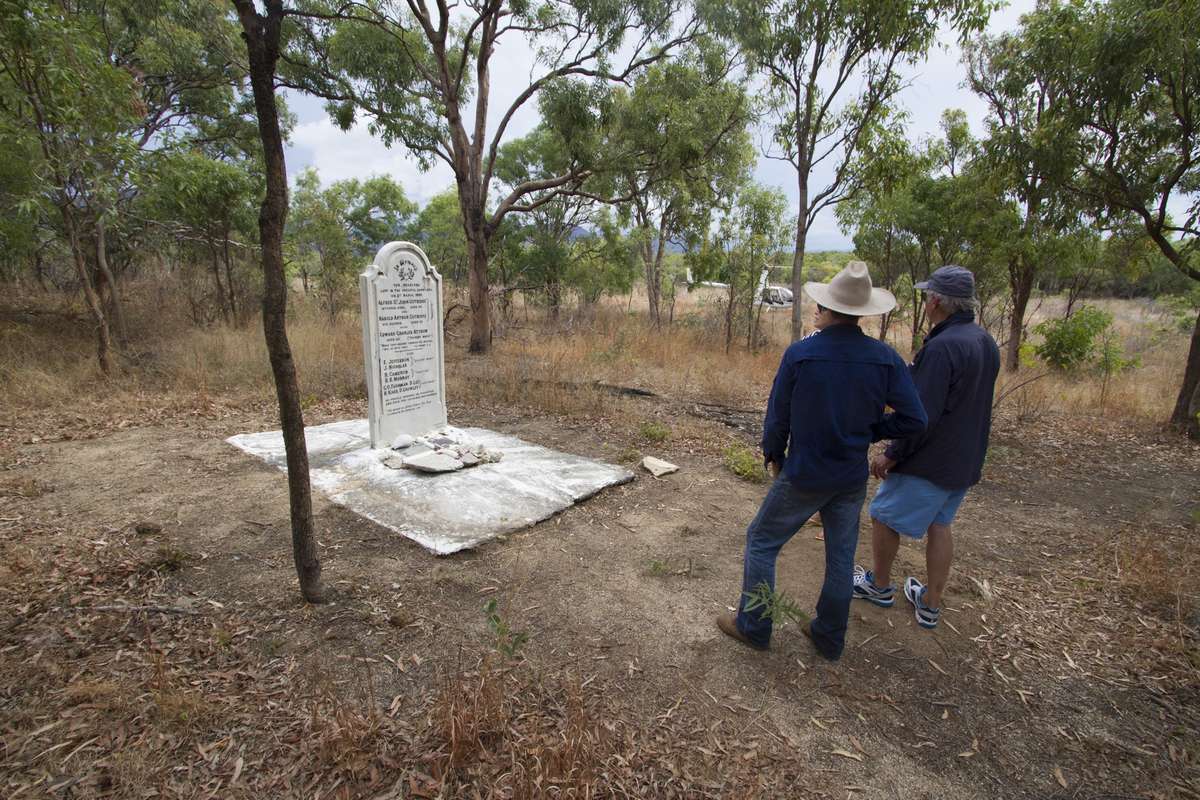 The 1899 monument to the victims of the cyclone. Photo: Xanthe Rivett, Silentworld Foundation

The site is proving quite frustrating to locate – we have significant magnetic anomalies (located by the magnetometer) but despite systematic searching have failed to locate the cause of the anomaly. We have also failed to locate any other artefacts material associated with the site – such as ceramics, glass, copper or coal.  The only conclusion we can come to is that the site has become deeply buried over the last 190 years and is now heavily covered by several metres of sand, silt and coral and will take a cyclone of the magnitude of the 1899 one to become uncovered again.

With the weather continuing to hold and with other targets such as the Morning Star to locate we have decided to close down the search for the Frederick for the time being and move out attentions further north.