A Seminar on Western Australia’s maritime industries, their craft and their people

Fishing, pearling, sailing and trading … the boats listed on the Australian Register of Historic Vessels from Western Australia have done all of this and more, and on 15th November an ARHV seminar on this theme, held in in Fremantle in association with the Western Australian Museum and the Australian Association for Maritime History will bring the stories onto the stage as people associated with them speak from personal experience.

Meanwhile the vessels can talk too, and the Australian Register of Historic Vessels is one way they can put a voice to their background, along with their related designers, builders and events.

Trixen and Intombi are both pearling luggers, each with two lives to tell. Both were first built in the very early 1900s and served their time up north on the Broome pearling fields. Intombi was there from 1903 through to 1931 and during various changes in ownership it belonged to the well known firm Streeter and Male. Meanwhile Trixen was built for pearling master Penn Blick who had come from South Africa. 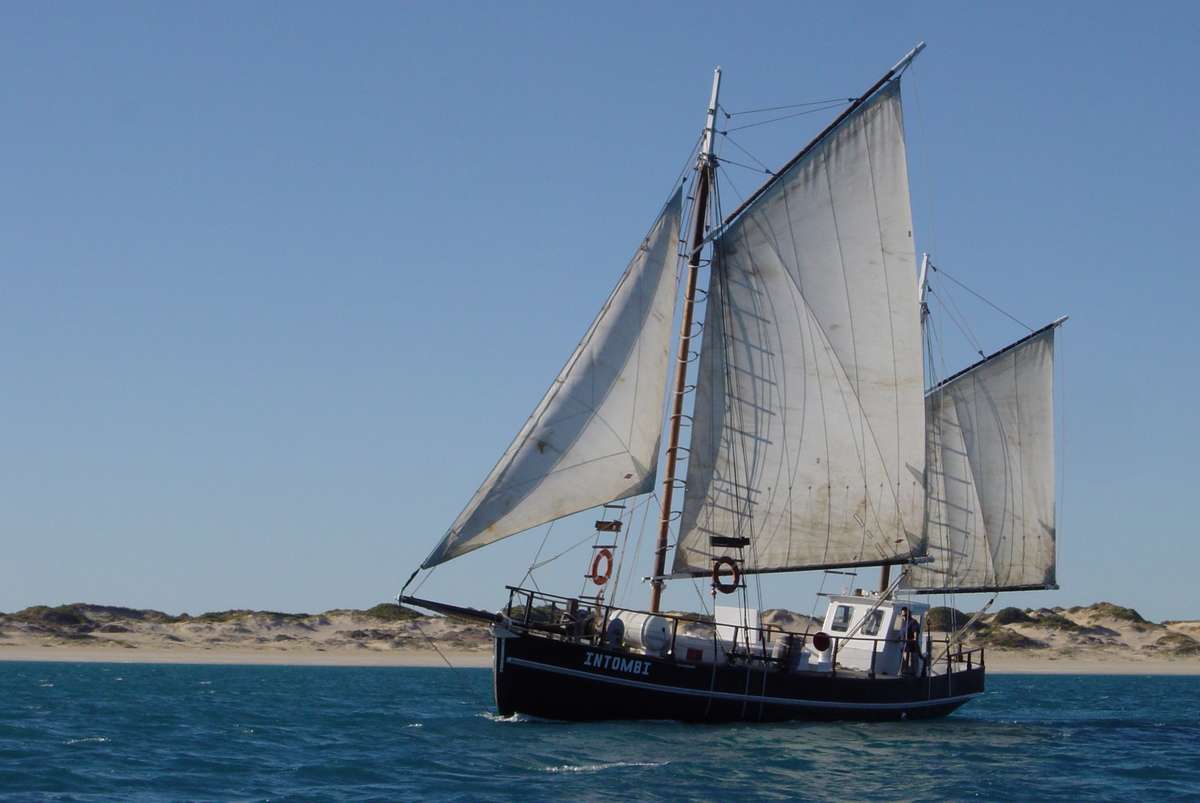 Intombi was originally built by Chamberlain and Cooper while Trixen’s first builder is unknown. Both were then built a second time under the guise of being a “repair”, a euphemism by which indentured Japanese shipwrights could build a new vessel. Intombi grew nearly 5 metres during the work, which was carried out using Japanese indentured labour on the Roebuck Bay foreshore at Broome in 1929, and became 15 metres long.  Later on in 1940 Trixen’s then owner Louis Goldie commenced a similar ‘repair’ on his vessel.  Unfortunately the Japanese entry into World War II saw the Japanese shipwrights interned and the reborn Trixen sat out the war as a part built skeleton on the foreshore of Roebuck Bay. Oral histories suggest that Trixen‘s frames still carry the marks of shrapnel from the Japanese air raid on Broome in February 1942.

After the war the unfinished lugger was bought and completed by the firm of Streeter and Male, making Trixen the penultimate Broome lugger built with locally grown kadjebut frames rather than laminates. In the process the length had grown to over 15m and the registered tonnage almost doubled.

Streeter and Male come up regularly with the story of pearling.  George Streeter and Arthur Male formed the firm Streeter and Male Ltd. George Streeter came out to WA as an agent for his father, EW Streeter, a London based jeweller and gem merchant. When he returned to London in 1898 he left Arthur Male to manage the company’s interests and by then they were pastoralists and owned cattle properties including Dampier Downs, and Roebuck Plains as well as working in the pearl shell and fishing.

Streeter’s vessels had been on the west coast since 1884.  Streeter’s jetty was built across the tidal mudflats of Dampier Creek in the late 1880s next to the company’s camp and shell shed. This jetty was used by the pearling industry from the 1920s when there were around 400 pearling luggers in Broome until the 1980s when the fleet had dropped to the last dozen or so craft that worked under sail. In 1989 Streeter and Male Pty Ltd was purchased by Paspaley Pearls Pty Ltd. 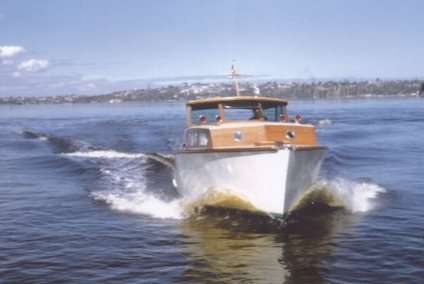 Bingarra is a fast motor launch and reminds us that WA was far enough away from the east coast, with the Nullarbor as a physical barrier that they became self-sufficient rather than relying on outside resources. Bingarra’s designer Len Randell is a great example; his early amateur design work was done in spare time away from his job in the Public Works Department of WA. There was no place he could study to become a naval architect in WA, so he submitted examples of his work and a thesis to the Royal Institution of Naval Architects in London. In 1952, he was accredited, becoming an Associate of the RINA and a qualified professional Naval Architect. Randell became one of WA’s most accomplished designers, developing home-grown designs for new materials and new types of craft.  Bingarra was a departure from the planked construction that was normal for motor cruisers in the mid-1950s. The plywood hull is about 10 metres long and the builder was Stewart Ward the father of Steve Ward, builder of the America’s Cup winner Australia II, one of the country’s most recognisable yachts and on display at the Western Australia Maritime Museum. 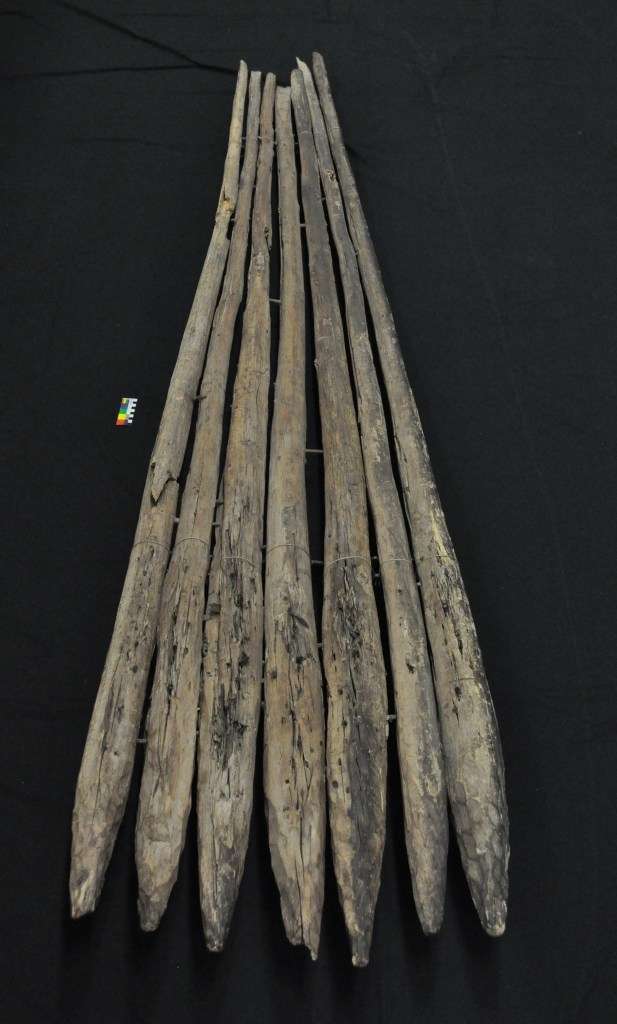 The original boats of Western Australia are Aboriginal Kalwa double rafts, used for fishing, hunting and transport in the extreme tidal areas of the Kimberley coastline. Western Australia Museum‘s example E3834 was collected by Henry C Prinscep Chief Protector for the Department of Native Affairs in WA in the early 1900s. The raft is a typical fan of seven logs attached to each other with pegs, and probably made from mangrove wood. It is about 3 metres long but only one fan exists, raising the possibility it is in fact an example of the single fan version documented and featured prominently in W Saville-Kent’s book ‘The Naturalist in Australia’ (1897).  It is the only raft he describes and the image shows a pen at the wider end, with the raft paddled while standing up. It is understood the museum’s craft came from Yampi Sound on the Kimberley coastline of WA.

All of these craft represent different ages of design and construction along the West Australian coastline, and tell fascinating stories of how they were built and how they were used.  Come to the seminar and you will hear more…...