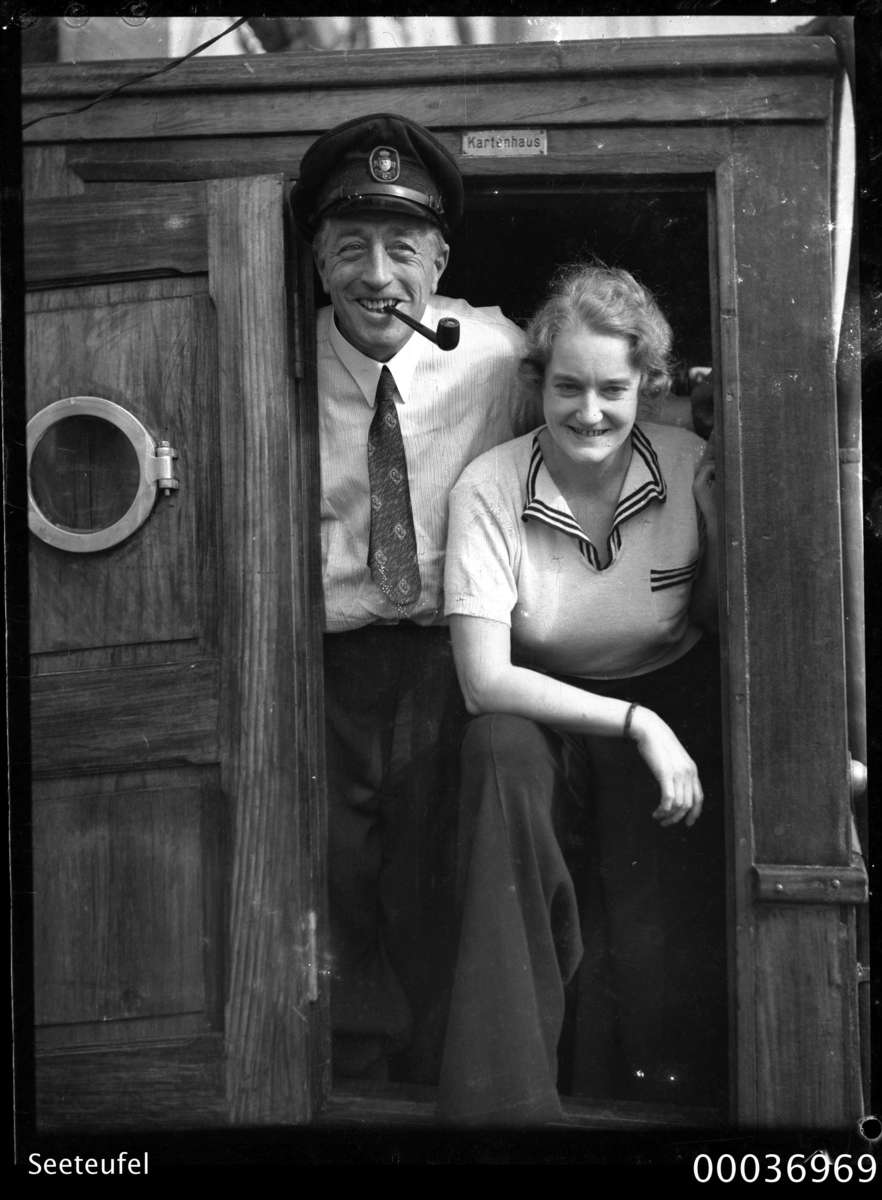 In 1938, on an uninhabited island somewhere between America and New Zealand, a German nobleman anchored his schooner. He had a mission. Twenty-one years previously, he’d buried treasure, or as he told the American press, ‘a chest with gold and German banknotes’. He told The Australian Women’s Weekly that a ‘plan of the hidden treasure was tattooed on his knee’ and he was finally making the journey from his country to retrieve it. There have been many labels used to describe Count Felix Graf von Luckner – war raider, Nazi spy, gentleman pirate, ‘rollicking buccaneer’, and the list goes on. Some of them are unfounded, yet some of them contain elements of the truth. So when he finally arrived, Samuel J Hood was on hand to photograph the man famed for sinking 28 Allied merchant vessels in 1917. Hood’s photographs display a glimmer of the controversy and suspicion aroused that day back in May 1938 as tensions brewed in Europe and a German war raider known as Der Seeteufel (the Sea Devil) sailed into Sydney waters in the dead of the night. 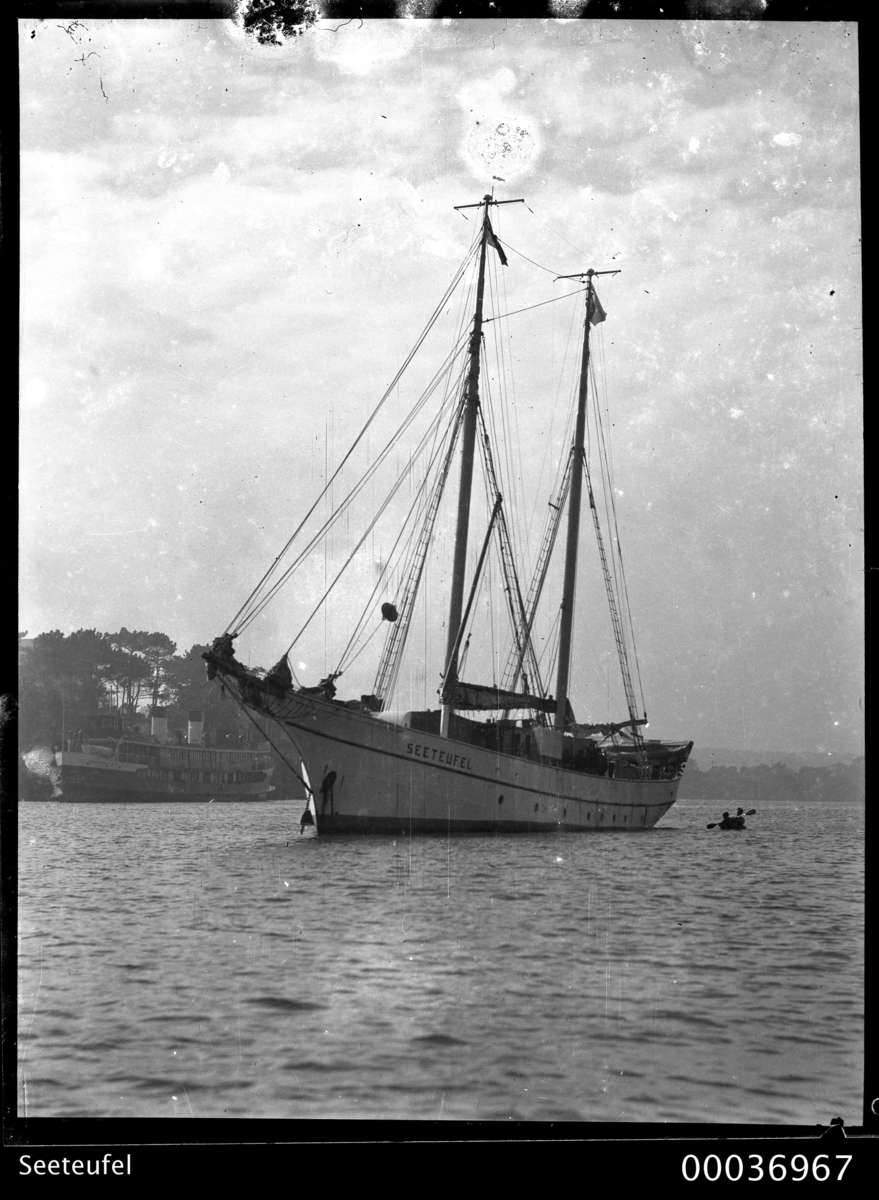 At about midnight on 20 May 1938, the Sea Devil anchored his namesake vessel in Watsons Bay in anticipation of Customs officials. Over the rail of his yacht, anxious to dispel the rumours he was an agent of Nazism, von Luckner boomed:

I am a citizen of the sea. There are no politics at sea … We are happy at sea, and I will tell you why. We have no diplomats – and no road signs! We have the stars, and the sun, and the compass. And there is one thing that binds us all together. The S.O.S.! If we sailors are in distress, and we call for help, the sailors who hear our call do not first ask what country we are from. Every sailor will answer that call at once and do all in his power to help. Those people on shore could take that brotherhood of the sea as an example!

From the very first moment of his arrival, von Luckner wasted no time; he was going to charm his way into Australia, like he’d done everywhere else. By all accounts, the Count was tall, with blue eyes and an expression that was ‘open and lively’. The lines on his face told of many years spent at sea and he had a deep voice that reverberated and demanded attention. Nowhere does his exuberance show more than in the Cinesound newsreels held in the National Film and Sound Archive of Australia. In them, the Count speaks rapidly and excitedly of his time spent travelling across Australia:

I am not a stranger of your great country! Thirty-four years ago, the boy of 13, I landed in Fremantle in a Russian ship. I started a dish washer and I … got homesick … I thought of the promise I had given my father to become a lieutenant in the army, and here I realised ‘well boy, if you have given a promise you must stick to it’. But how shall I manage to become a lieutenant here in Australia so one day, I met the Salvation Army. Well, I didn’t know what kind of army it was, but they had lieutenants, but so I thought ‘By Joe! Here I have a chance to fulfil the promise I gave to my father to become a lieutenant in the Salvation Army’ … but it took me too long time to become a lieutenant. So I joined magicians as a bill poster, responsible for their advertisement. With the magicians I travelled through your country for seven months and I assure you, my dear Australians, only a tramp really knows how great your country is! 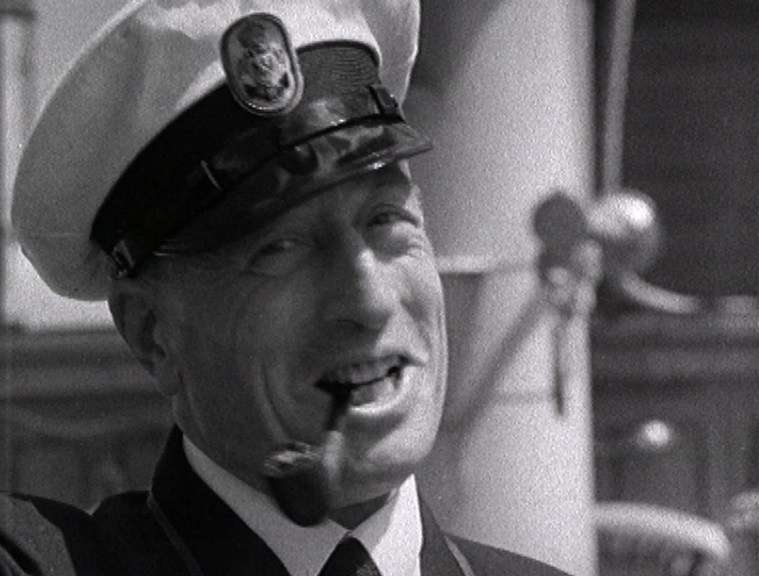 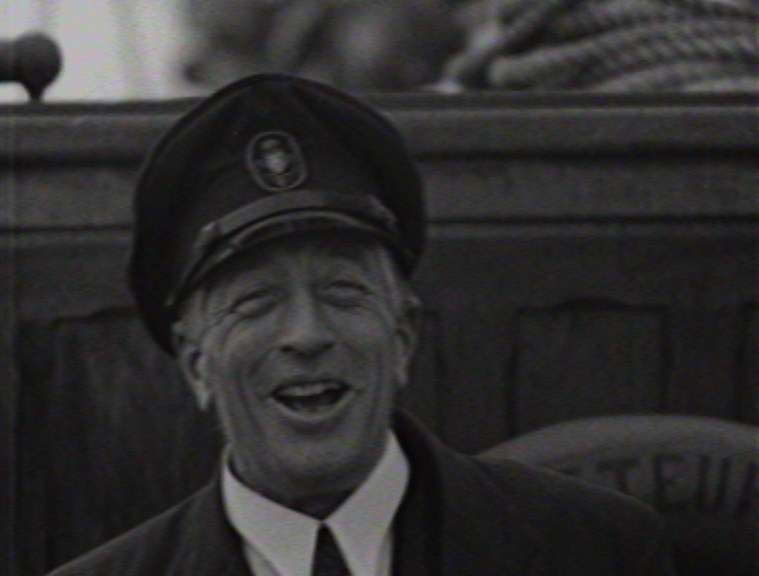 Customs Boarding Inspector E Pickett was embarrassed as he was greeted with an embrace from the Count, after he realised Pickett was the man who’d secured his employment as an assistant lighthouse keeper at Cape Leeuwin 34 years previously. The Count shouted: ‘These fools say I have come here for politics! I have come 20,000 miles just to see you again!’

The cameras were given behind-the-scenes access to the Count and Countess’s living quarters below deck. These films reveal what the museum’s photographs don’t. The Countess poses for the camera, pretending to write at a table while the camera then pans to a shot of a pirate flag, alluding to von Luckner’s history. As the publicity machine churned, a jovial and charismatic von Luckner proclaimed his desire for peace and an alliance between Britain and Germany. 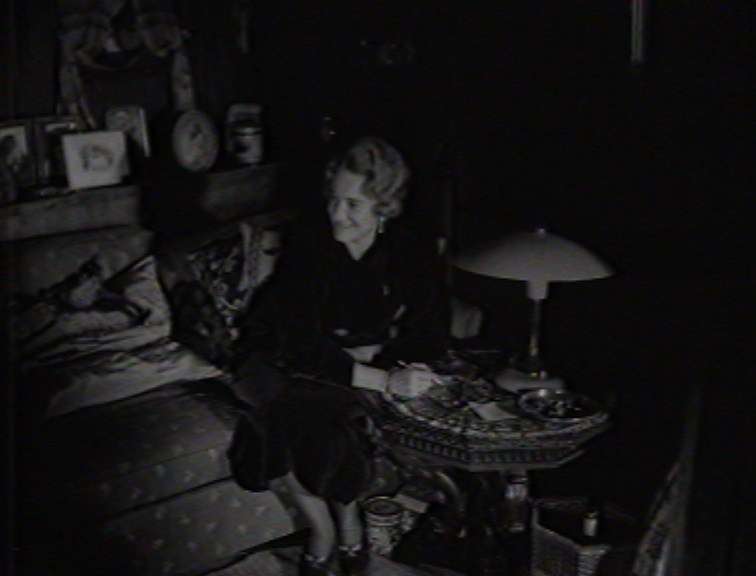 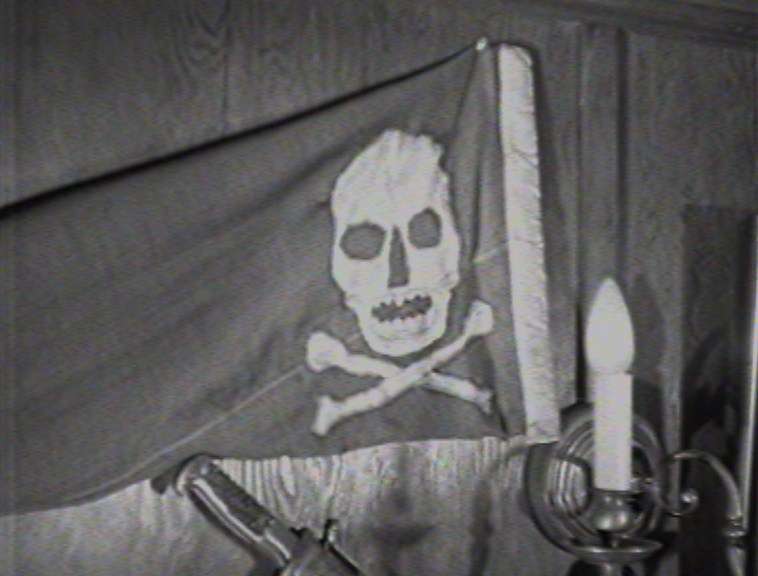 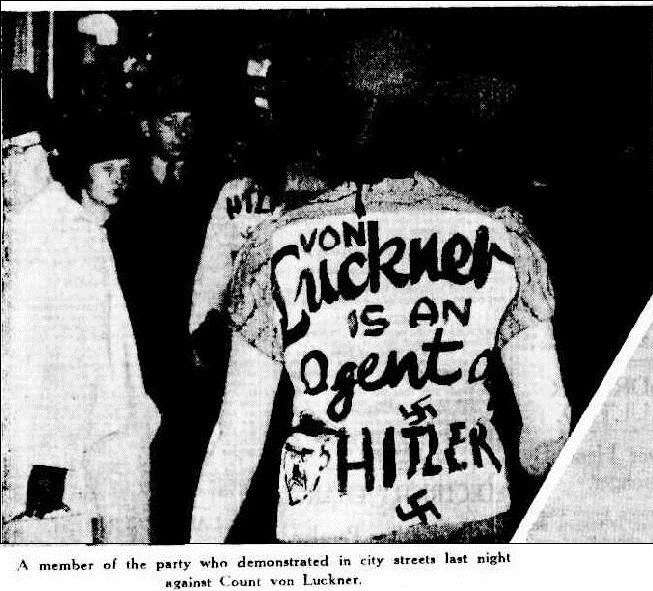 However, no amount of goodwill and bubbly enthusiasm shown by the Count could stem the tide of protest and suspicion demonstrated by members of the Australian public. How could the Australian Government allow a Nazi warmongering spy land on our shores? More than 150 people reportedly gathered outside the Australian Broadcasting Commission’s studio in Market Street, and waited for the Count to appear hurling cries of ‘Felix the Cat! We don’t want you in our democratic country’ and ‘Down with Hitler and Fascism’. On the morning of 9 June, a group of six men and women from the School of Modern Writers attempted to read an ‘address of welcome’ to the Count. Von Luckner was furious, as the students read of the ‘unspeakable barbarity’ being committed by those in power in his country.

But while certain members of the public focussed their suspicions on the Count, it seems the Commonwealth Investigation Branch (CIB) also had their sights set on the crew, including a person they least expected – Countess Ingeborg von Luckner. The numerous files kept on the von Luckners held at the National Archives of Australia have now been digitised and contain a fascinating read. They communicate the political climate of the day as one of paranoia and suspicion during a time where the dark shadow of Adolf Hitler’s Nazi regime had descended upon Europe. 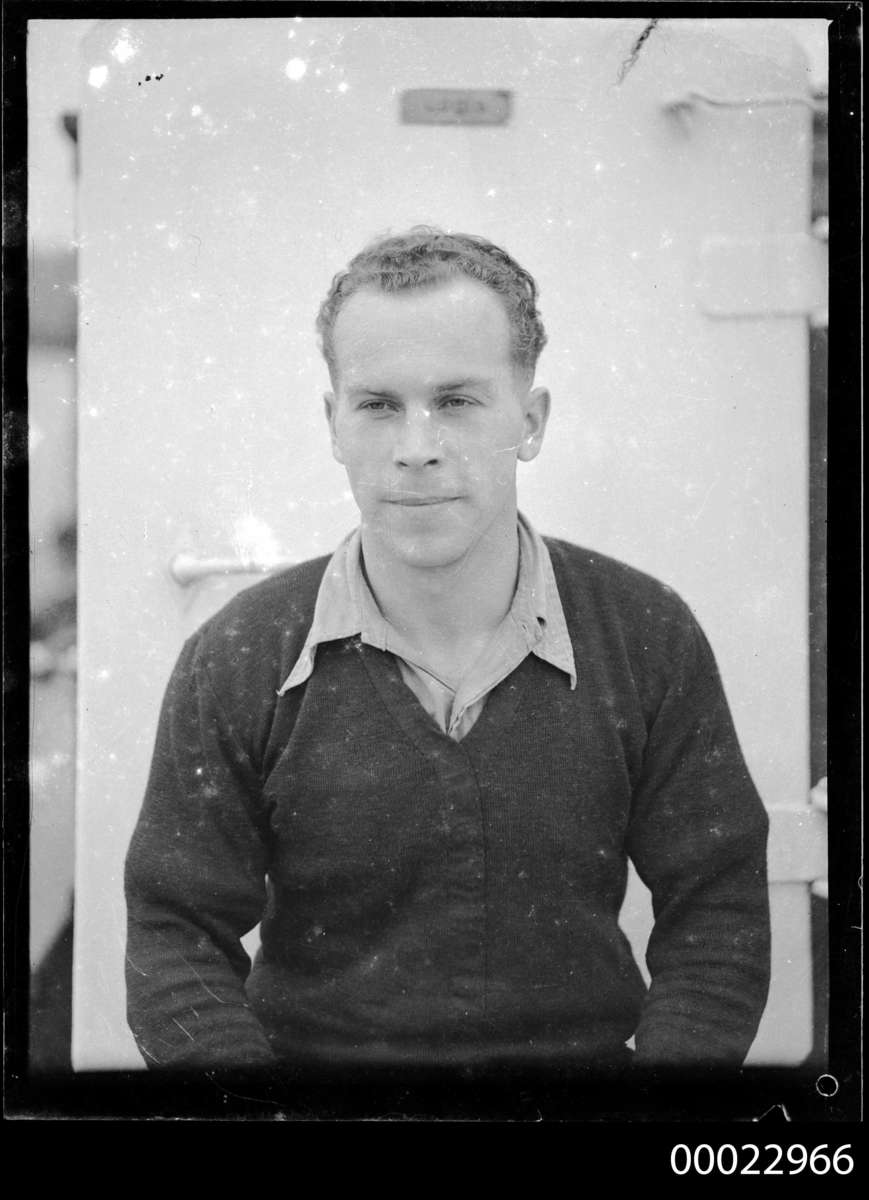 One crew member named Colin Moore, a New Zealand radio announcer who joined Seeteufel while the Count was in Auckland, seemed to be the source for much of the information gathered by the CIB investigators. The CIB concluded that if a member of the German secret police, the Gestapo, was on board Seeteufel it was probably not the Count but more likely one of two crew members: Engineer Paul Kunert or Seaman Frederich Thiele. In the end, they concluded that Kunert was the more likely of the two. Yet in another report, the investigator concluded: ‘I am inclined to think that Colin Moore is imaginative and probably misinterprets ordinary incidents’.

Added to these reports was the surprising conclusion that the Countess was colluding with Communists against her husband. According to Moore: ‘the Countess is the brains of the ship, is a talented person and the impression she creates on visitors is that she is just a nervous woman entirely dependent upon the Count … is evidently contrary to fact as she controls practically all the activities of the ship’. In another incident, an unknown gentleman came aboard to see the Countess. Moore allegedly overheard the Countess saying ‘I did not get it, I did not get it’ and ‘the Count knows nothing’.

Yet despite the cloud of suspicion, the endless interviews with witnesses, including the accounts from Moore, the evidence suggesting the Count was a spy is weak and inconclusive. In some cases it appears completely fabricated. In one file, a newspaper clipping detailing a photograph of Hitler and members of his inner circle is included as evidence to link the Count with the Nazi leader. However, someone has drawn in von Luckner’s signature smoking pipe and captain’s hat, as if just by doing that results in a positive identification of the Count. 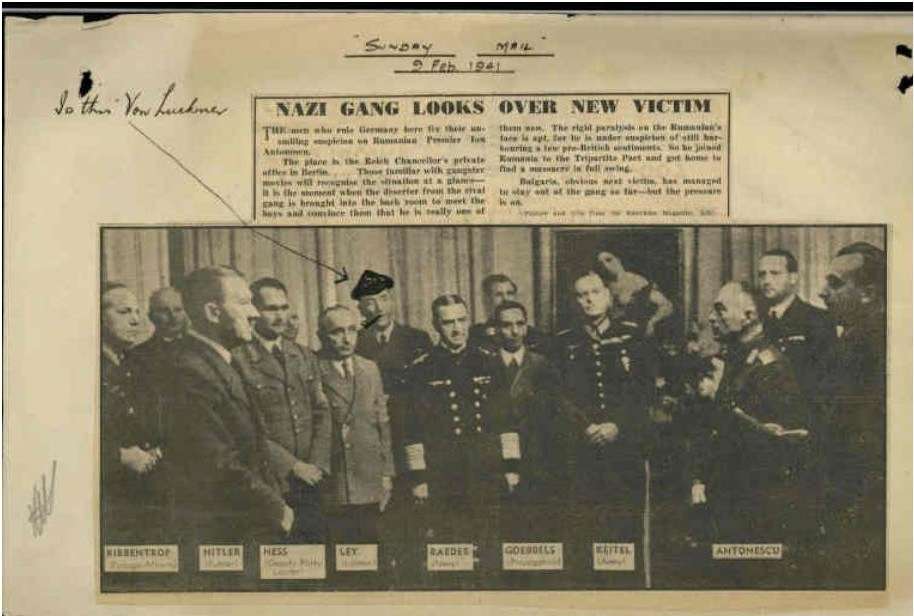 Article featuring drawings, contained in the National Archives of Australia 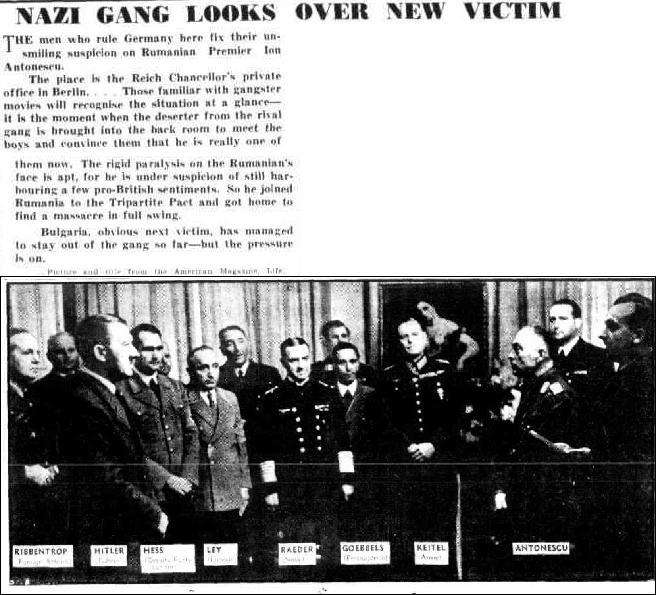 Count von Luckner is one of the most colourful personalities I’ve found so far in the museum’s collection. Brimming with excitement and a rare liveliness, you can’t help but smile as you watch him talk, not least because of his facial expressions and dramatic gesticulations, but more because of his turn of phrase – he is remarkably fond of saying ‘By Joe!’ A master storyteller, it is difficult to separate fact from fiction, especially when they are so closely intertwined. But perhaps that is all part of the point of von Luckner’s story, all part of his persona and flair for drama. As Lowell Thomas remarked in his amusing preface, ‘A Matter-of-fact Preface to a Salty Yarn’, in The Sea Devil’s Fo’c’sle:

A gifted story-teller, a man with a magnificent flare [sic] and genius as a raconteur, he has cultivated a fund, a treasure hoard, of beguiling sea yarns … He still leans with undiminished reliance on the priceless “by Joe,” … That phrase has become almost a name and a characteristic symbol for the jolly count, and, indeed, expresses in brief and figurative form the essential history of the man of title who spent his youth before the mast and then became a naval officer, a war hero, and a social lion.

Check out Hood’s photographs of the Count’s visit from the museum’s collection.

Thanks go to the National Film and Sound Archive of Australia for providing the screenshots of von Luckner’s from the newsreels in their collection.