On this day, 100 years ago, the Royal Australian Navy’s first fleet of warships entered Sydney Heads ‘from out the morning mist’, as The Sydney Morning Herald dramatically described it. Headed by our first naval flagship, the aptly named Indefatigable class battlecruiser HMAS Australia, HMA Ships Sydney, Encounter, Melbourne, Warrego, Parramatta and Yarra comprised our first Fleet Unit. Sydney’s shores were lined with thousands of people, dressed in their Edwardian best, with their waistcoats and feathered hats. Over the next few days, Sydney Harbour will come alive once more, this time without the Edwardian garb, for International Fleet Review and what will be the largest gathering of navy ships most of us has ever seen.

About three months prior to its grand entrance, Australia set sail from Portsmouth, England with the ‘Botany Bay Buccaneers’ (as the Portsmouth dockyard workers christened the crew of the flagship), saluted as they swung out of port and set course for Australia. English journalist, Frederic Morley Cutlack, was on board as voyage correspondent and in true colonial rhetoric he reported:

In the future every boy must read in his school books how on the 21st of July, 1913, the first locally-owned Dominion flagship in the Empire, carrying the first Dominion Admiral, put out from the mother-coast and sailed for her colonial waters. For the Australia marks a new epoch in our Imperial story. The birth of the Australian navy is an event which time can only magnify, and not diminish … In the life of our Empire one might be forgiven for saying there has been no more arresting incident since the loss of the American colonies. 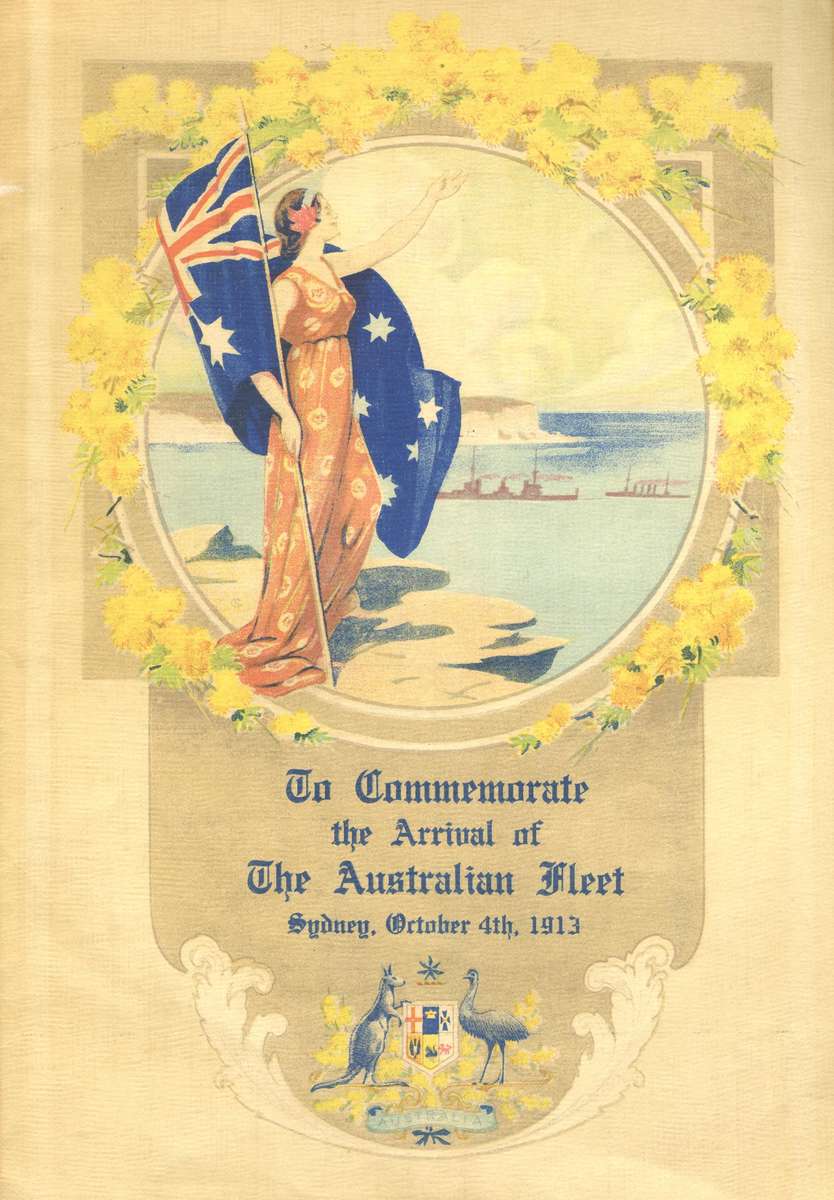 Commemorating the arrival of the first Australian Fleet Unit, with the female personification of Australia.
ANMM Collection

For so long, Australia had been a ‘dream’ and there can be no doubt that the tangible reality of armoured steel that entered the harbour that day in October 1913 was awe-inspiring for many onlookers. Arthur Mason, reporting for the SMH on 9 August 1913, conveyed this sentiment:

The sight of Australia’s fledgling fleet demonstrated that the nation was capable of taking control of its own defence. Minister for Defence, Edward Millen, compared the arrival to that of Captain James Cook, and stated that it marked a “coming of age” in the “growing responsibilities of nationhood”. In the SMH’s Pictorial Souvenir of Australia’s arrival on 6 October, he was quoted as saying:

The Australian Fleet is not merely the embodiment of force. It is the expression of Australia’s resolve to pursue, in freedom, its national ideals, and to hand down unimpaired and unsullied the heritage it has received, and which it holds and cherishes as an inviolable trust. It is in this spirit that Australia welcomes its Fleet, not as an instrument of war, but as the harbinger of peace.

I wanted to quote contemporary descriptions of the RAN’s first fleet because they demonstrate how the fleet, particularly the flagship, was portrayed in the media. Cloaked with sentimentality, at the heart of these depictions was one unwavering motif, that is, the concept of nationhood. As the fleet came through ‘the mist’, led by the most powerful fighting ship ever to have entered Sydney’s waters, the message was one of optimism, tradition and might. And this was a message that was widely disseminated. Yet despite the general air of optimism and Millen’s idea of the nation’s flagship as a ‘harbinger of peace’, within 10 months Australia, as a sovereign state of the British Empire, entered into its deadliest conflict to date, the so-called “war to end all wars”. 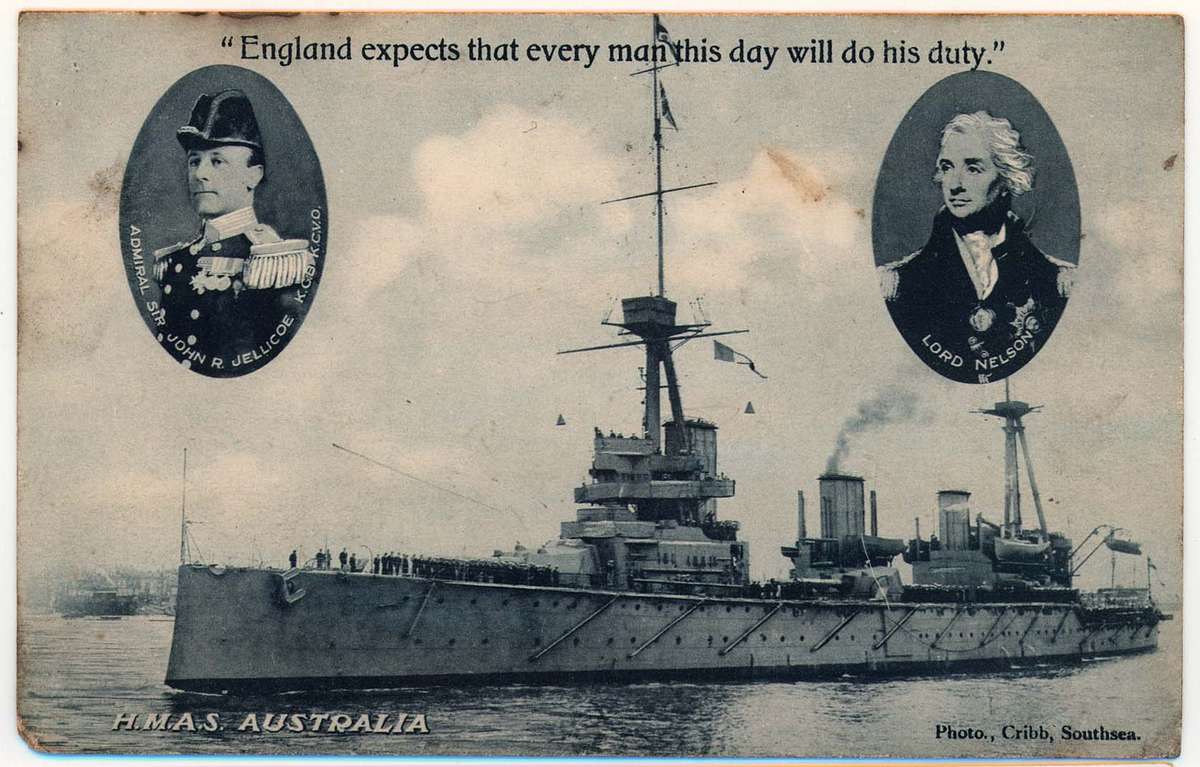 Postcard showing HMAS Australia departing Portsmouth for Australia, this postcard was produced during World War I as a means of rallying patriotic pride for the British Commonwealth, c 1916.
ANMM Collection