The action for final race for the America’s Cup in 1983, dubbed ‘the race of the century’ by US skipper Dennis Conner, began well before the race started. Mindful of some starting issues, the Australians called for a lay day after race six to put some practice in. Meanwhile, the US team used this to optimise their yacht Liberty with ballast and sail area changes to make it faster in the expected lighter winds, something the Australians had wished they had thought of too.  Racing was abandoned for 24 September due to poor wind, and then the US team called a lay day themselves to do more work on Liberty, further irritating the Australians. 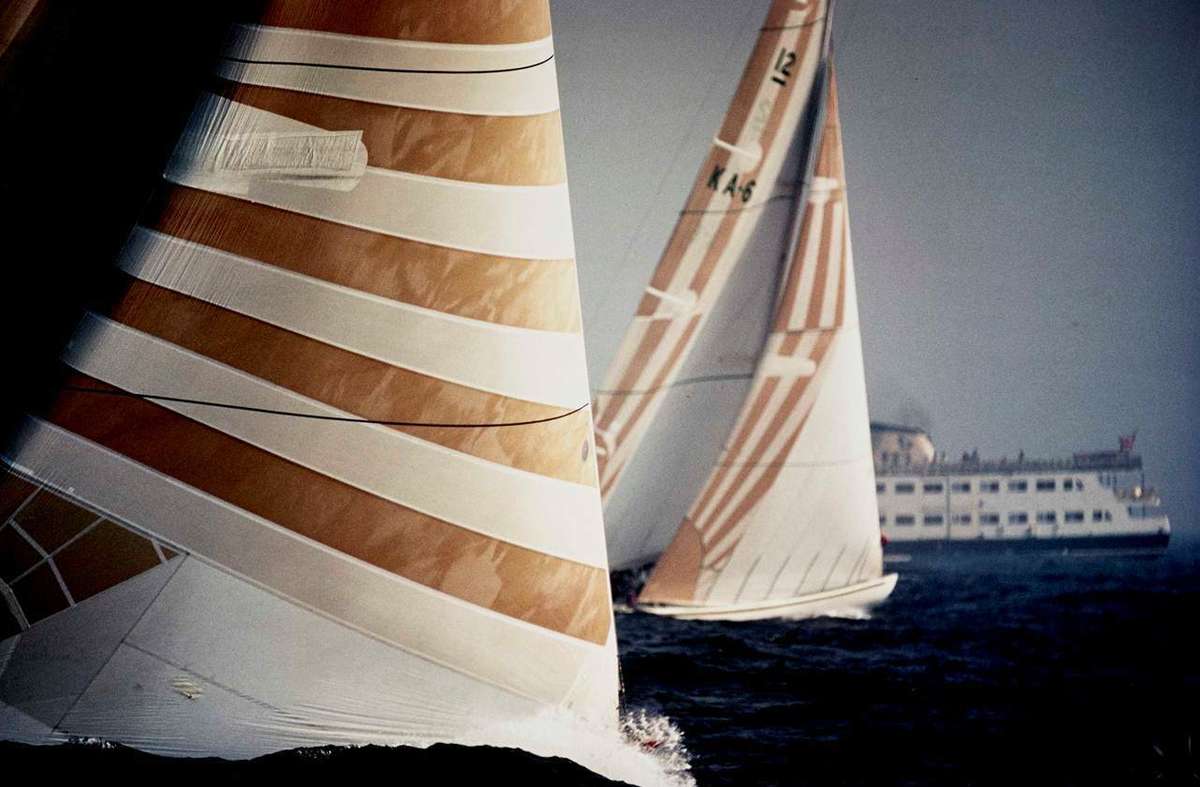 Australia II (KA 6) nicely out in front of Liberty in an earlier race, Sally Samins photographer.

When the gun finally fired on 26 September, two edgy teams, fully aware of the intense interest and outcome, got away to a tame start with Australia II in the slightly better position. Whilst it is always the aim to have the best sails, best design and best crew for maximum boat speed, yacht racing is also about tactical manoeuvres and reading the wind on the course. Choosing when to change direction, called  ‘tacking’ upwind or ‘gybing’ downwind under spinnaker, can make significant gains or losses regardless of how good the yacht is.

As the two boats began tacking up the course, Australia II realised they faced a much faster Liberty and had lost some advantage they had previously held in these light shifty conditions. Shifty was a key word – the breeze had small, but important variations in direction and strength, and Liberty was first to gain, edging out ahead by just a couple of boat lengths when it benefitted from a better patch of  breeze  part way up the leg. They rounded the first mark with this small advantage, kept it on the first reach, and then lost ground on the next leg as Australia II nearly caught up again, showing it could do well under spinnaker on a square run – in hindsight this was a warning of things to come. They were still in the race and niggled away up the next windward leg, but just as Australia II closed on Liberty, another shift in direction and strength went Liberty’s way and they pulled out to almost a minute lead, turning into the next square run.

This was where everything Australia II had done came to the fore. Sensing the breeze was stronger on the left they followed Liberty toward that side, but straight away they could see they were sailing better. The hours of spinnaker testing and crew work had put them ‘in the groove’ and they immediately began to close the gap. Liberty’s crew got edgy and started to look back at Australia II, loosing concentration which further slowed their yacht. Liberty then gybed to try and cover Australia II, who held their nerve and stayed with the better breeze while Liberty sailed into a lighter patch. Things were now going Australia II’s way.

All the way down the course Australia II’s crew held their composure, sailing their boat and not the looking to the other one, except for the tactician. When they did gybe they chose the right moments to take advantage of the small wind changes, while Liberty was losing more ground with additional gybes at the wrong moment, trying the keep in touch with Australia II as it gained on them. Australia II was dictating the tactics now from behind, and eventually they drew parallel, but going both faster and lower, meaning they were covering less ground toward the next mark.

As they closed on the last rounding mark at the bottom of the course, with both boats on opposing gybes the moment came when Australia II passed ahead of Liberty, still sailing faster and in phase with the small wind shifts. Choosing the right timing Australia II gybed down and then back again to the mark, rounding 21 seconds ahead of a horrified US team on Liberty. 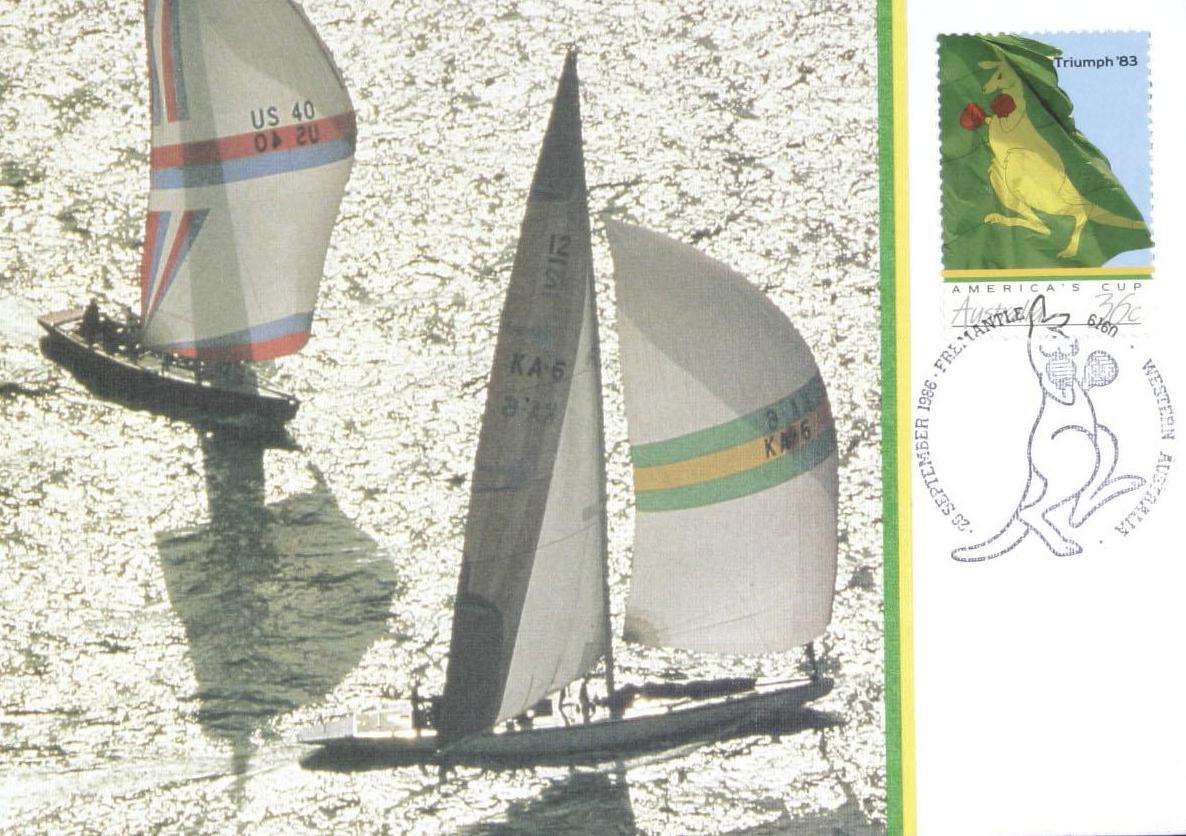 The crucial moment, captured on a postcard, where Australia II passes ahead of Liberty on the run to the mark. ANMM collection

Liberty’s crew did not give up for the final windward leg, knowing they had speed to match Australia II upwind and could still regain the lead through a tacking duel. Australia II put a tight cover over Liberty, then went back to a loose cover as they realised they were losing speed in the tacking manoeuvres. Liberty gained, but could not get even and neither team made any mistakes with their crew work despite making well over 40 tacks. Approaching the finish Conner tried one last trick, taking the yachts out to one side, beyond the shortest course to the finish, trying to gain time and maybe a wind shift that would close the gap. In the end it was Australia II that got a slight advantage when they tacked back toward the finish line, still holding a slim lead. Australia II benefitted from a stronger gust and pulled away from Liberty, crossing 41 seconds ahead, and into a permanent place in sporting history. 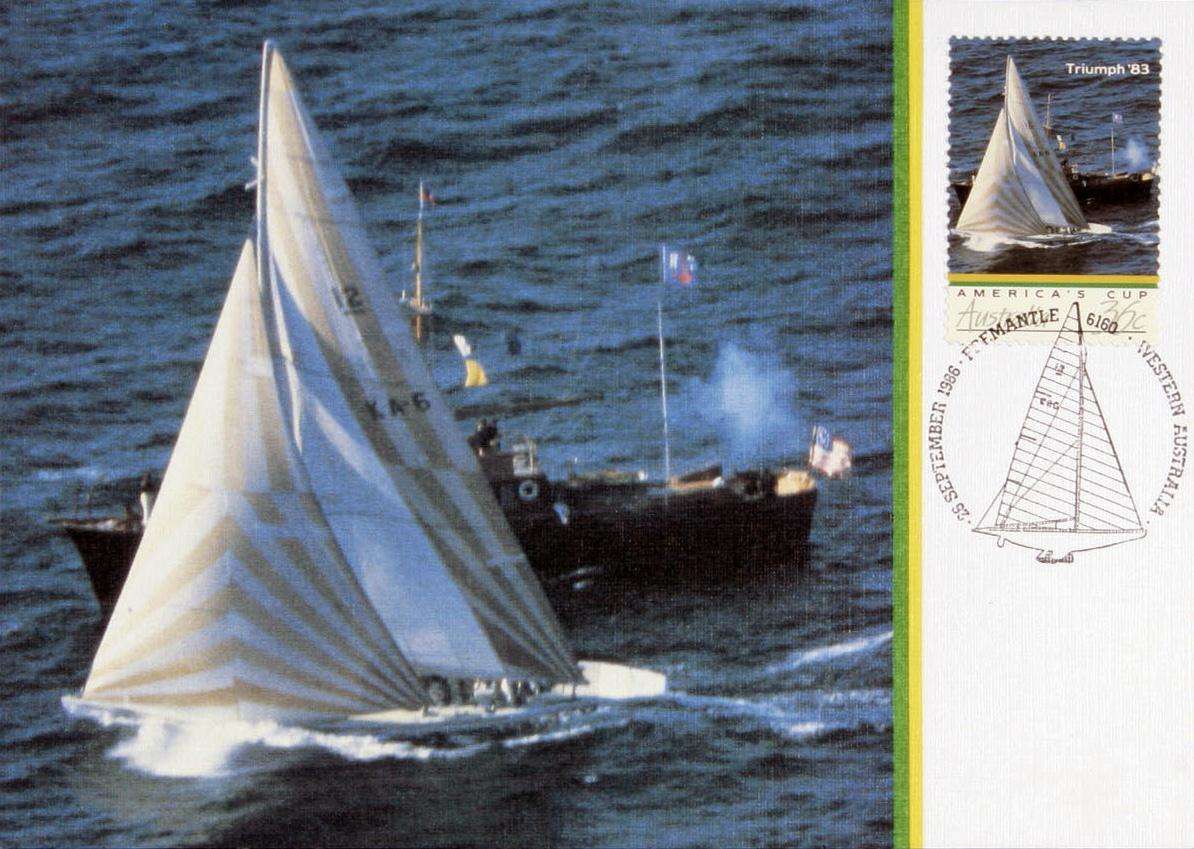 The gun goes and 132 years of US victory in the America’s Cup is ended by Australia II.
ANMM Collection

View all posts by David Payne→
Posted in: Arts and Culture , Vessels
↑