Australia II has become one of the nation’s most recognisable vessels, thanks to that extraordinary America’s Cup win in 1983. Almost everyone knows about its winged keel that seemed to make it unbeatable. The keel completely spooked the Americans who tried many moves off the water to avoid having to race against Australia II.   However there was much more to the boat than just that keel, because its peculiar advantages allowed other subtle changes to be made that further helped Australia II to dominate many races. Designer Ben Lexcen had trialled endplates and other similar features on rudders, centreboards and keels at different times in his career, starting with a Moth class dinghy in the late 1950s, and then the break-through 18-foot skiff  Taipan in 1959. The focus of his efforts was to reduce the drag and loss of efficiency from tip vortices off these appendages. These experiments met with mixed success but when he returned to the idea again in the 12 metre class, he developed the concept from a different direction.

Twelve metres are designed to detailed rule for their allowed dimensions. They are heavy boats for their length, with a considerable amount of ballast. The draft restrictions and large volume of the hull result in a shallow depth keel, with a poor aspect ratio and poor efficiency. The wings on the keel helped to reduce these inefficiencies in a similar way to the endplates he had experimented with, but he was able to make another bold step in lateral thinking. Rather than just realising the improvements to drag, Lexcen could see other advantages at the same time, and this was characteristic of his ability to think around many things at once. 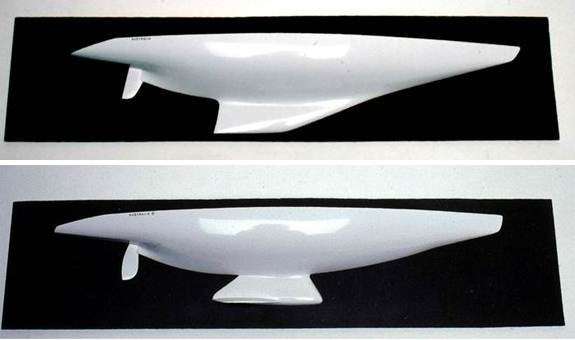 These two half models in the ANMM collection show a comparison of a conventional 12 metre Australia (1977 and 1980) above with Australia II below.

The wings were made quite large which concentrated more of the lead ballast lower down, an improvement to stability and therefore the yacht’s speed. At the same time Lexcen was looking at an inverted or upside down keel profile, so that the longest chord and greatest mass was now at the base, not where it met the hull. This upside down profile and additional weight in the wings ensured that the ballast keel’s centre of gravity was now significantly lower than a conventional 12 metre design, as well as being a more efficient shape.

Lexcen then optimised the hull and rig proportions around the advantages this keel offered by choosing to design the hull with a slightly shorter waterline and greater sail area than normally used by other 12 metres. Careful manipulation of the hull shape at the measurement points ensured it had a long waterline when heeled to take advantage of the power that was achieved with more sail and more stability than the other designs.

There is a complex set of choices and compromises that have to be made in relation to the best proportions and shape of the keel and hull around the desired hull dimensions and sail plan area allowed by the rule. There are always penalties along with advantages. In this case one of the significant penalties was the greater wetted surface area and resultant drag, coming from the addition of the large wings. With the aid of the tank testing using one-third scale models and computer simulations it was possible to trial a variety of models generated from Lexcen’s basic concept, often making gradual changes as suggested by the testing. When the model with the best ratio of gains to losses was identified, the final design was then able to be drawn.

The final one-third scale tank test model of Australia II, part of the National Maritime Collection and on display in Wharf 7 foyer.

Australia II proved a breakthrough, and a handful as well (at least initially), but not because of any significant errors in the design. While one adjustment shortly after launching was to move the keel aft about 250mm for better balance, the major issue was simply that the proportions and shape gave Australia II characteristics that were new to 12 metres. It was stiffer and could hold on to its sail better in fresh conditions, and was much more manoeuvrable in pre-start situations.

As the crew began to sail the boat in Australia, working on producing the best sails, teamwork and racing skills, they realised there was something special about Australia II, but probably could not have imagined the drama ahead that would be the final race for the Cup on 26 September 1983.

Join us for a fascinating talk about the Australia II America’s Cup win this Thursday 26 September at the museum.