The Jorgen Jorgenson finally gets some ‘teeth’

As outlined previously, the transformation of the reconstruction of a Viking age karvi the Jorgen Jorgenson continues apace by the museum’s Fleet staff and Pyrmont Heritage Boating Club volunteers. Now that the insides have been prepared, the paintwork continues.

Theresa McKinley from Allpoints Shipwrights is leading the painting of ‘teeth’ along the top strake of the vessel. This pattern of yellow triangles can be seen in the reconstruction longship Gaia. 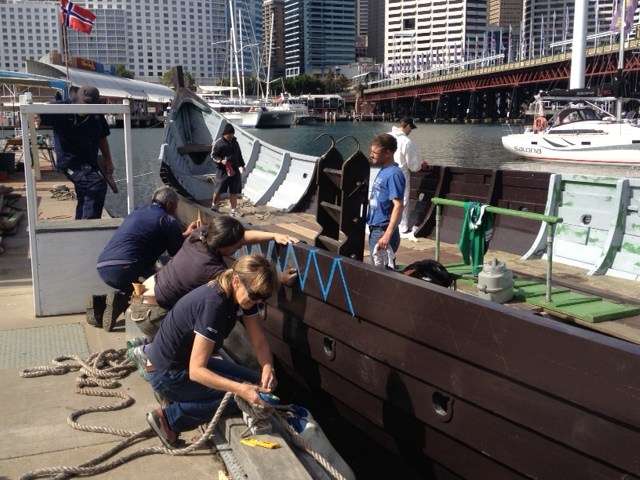 Therese and crew at work preparing to paint the teeth

The deck planking has almost been completed. Over the next two weeks the interior of the vessel will be fitted out. This will include installing the mast fish, stepping the mast, and rigging the vessel. 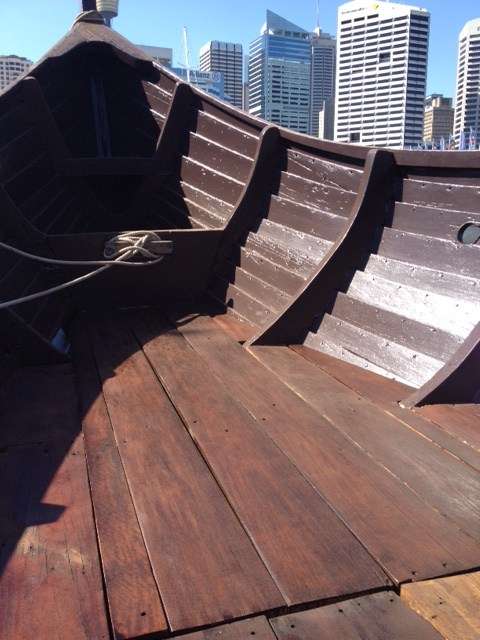 Another element of the interior will be the introduction of 32 wooden chests – one per oar. There were no thwarts or fixed benches found on any large Viking age vessel and it is likely the rowers sat on either loose seats or on their sea chests.

Although no chests were found in some ship burials, we must remember these were burials and not neccesarily the exact lay out of a vessel at sea. It has been suggested by Viking age scholars that the use of sea chests as rowing seats was quite likely for several reasons.

Firstly, they could be easily moved to create deck space – for whatever reason, but especially for shipboard combat (where whole fleets would apparently be lashed together to form a massive fighting platform). They could also be quickly stowed during rough weather and high seas.

The chest would store away from the weather each oarsman’s possessions, along with a húðfat or leather sleeping sack that could also double as a storage bag.

The author’s replica of the Oseberg 156 chest, crafted by ‘Sven the Merchant’

Many have been found with elaborate keyed locks while some have simple hasps. Their importance to their owners is suggested by the fact many were painted, carved and decorated. 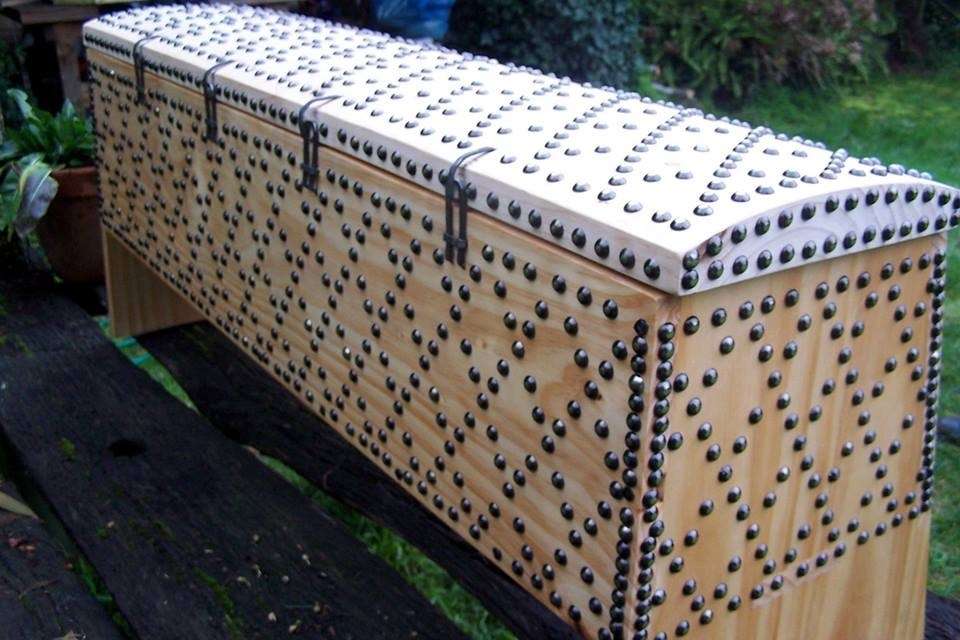 The Mästermyr chest is an excellent example of a Viking age chest – though not neccesarily a sea chest. It was found in 1936 in Gotland, Sweden by a farmer plowing a field. The chest contained an assortment of blacksmithing and woodworking tools and materials and, although a thousand years old, they would not have been out of place in any modern carpenter’s workshop.

A similar chest was found in the Oseberg ship burial. Many Viking age chests are characterized by an intriguing design with the end boards at an angle. It has been suggested this may have added stability if the chest was on the deck of a ship. 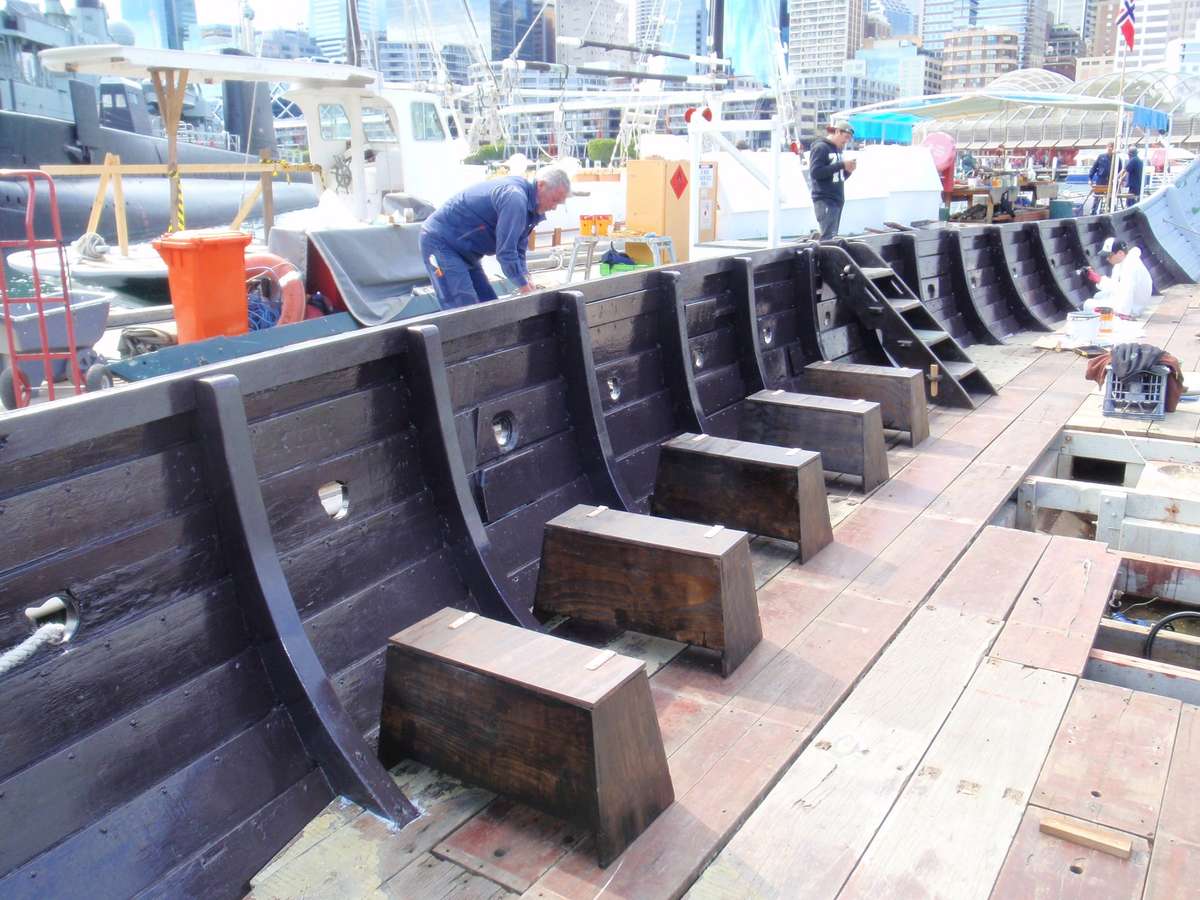 Trialling the sea chests/rowing benches on the Jorgen Jorgenson

Although similar in style, Viking age chests were unique to their owners and makers and may have been built according to individual taste, expense and requirements. The lid of the Mästermyr chest was curved on top, and hollowed out inside whereas the Oseberg chest lid is flat. The Mästermyr lid was attached by two hinges of a simple hook-and-loop type, and was closed with two hasps that fastened with a sliding lock. The joints were reinforced with wooden dowels.

It may come as a surprise that one of the leading makers of replica Viking age chests comes from Melbourne, Australia. Stephen Wyley, or ‘Sven the Merchant’ as he is known, makes chests of all sorts for historical reenactors.

It may also come as a surprise that there are in fact a large number of historical reenactors who recreate the Viking age in living history displays across Australia. But more on that in my next blog post about the Viking reenactors who are preparing to invade the museum for the Vikings – Beyond the legend exhibition!