The Jorgen Jorgenson at the museum’s heritage wharf

The decision to restore and fit out the Jorgen Jorgenson viking age reconstruction for the museum’s upcoming Vikings – Beyond the legend exhibition was a brave one. To get the vessel ship-shape in time for the opening night has meant a major focus for one of the important behind the scenes arms of the Australian National Maritime Museum – the shipwrights, tradies and volunteers who look after the floating vessels, known as Fleet Services, or just Fleet.

With the help of the Pyrmont Heritage Boating Club volunteers, Fleet have, pardon the pun, launched themselves into the project. 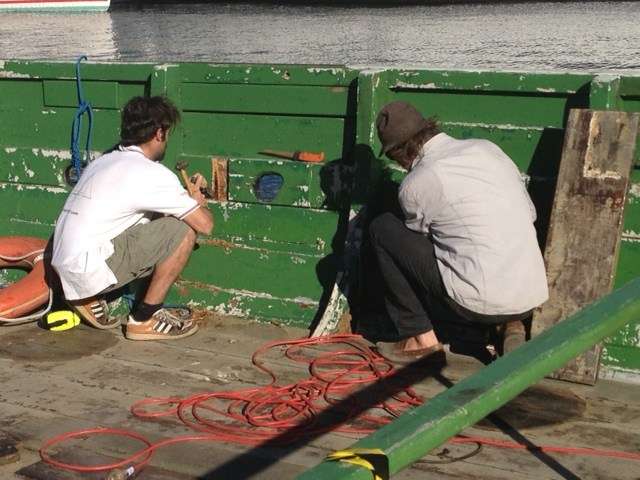 Perhaps unsurprisingly, Fleet staff haven’t had much experience with Viking age vessels. But that has not deterred Fleet manager Phil McKendrick who is rapidly discovering such interesting facts as: Vikings didn’t wear horned helmets; ship anchors were often made from a tree fork and a large rock; not all Viking ships had dragon head prows; two overlapping shields lined the gunnels per oar; and oarsmen sat on their sea chests (more on that in a later post!).

There is much work to be done before the vessel is ready for the exhibition opening on September 19. Shipkeeper Peter Lightbody is busy manufacturing oars. Interestingly, they need to be made in two different lengths – longer for the oar ports fore and aft as this is where the vessel narrows, and to keep 16 oars on each side in unison, they need to have roughly the same line and reach to the water. 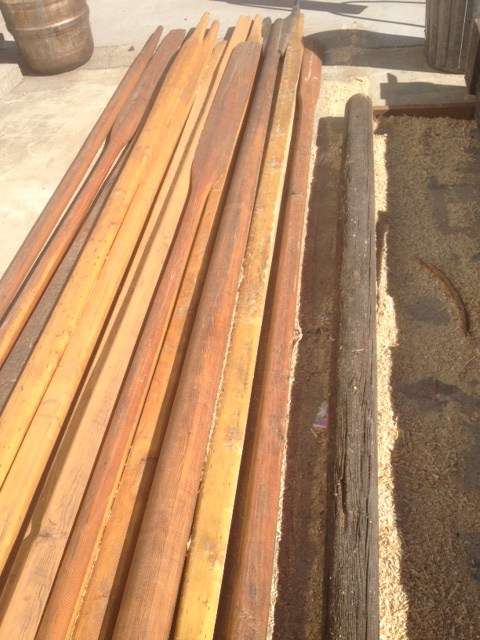 Dom Anderson – a shipkeeper who normally manages the daily tasks and maintenance for the Endeavour replica – has been tasked with making a whopping 64 shields, two for each oar. The shields are based on the Gokstad vessel archaeological find which showed remnants of yellow and black paint. Dom’s enthusiasm for the project has seen her recruit other Endeavour volunteers to help in spare moments. 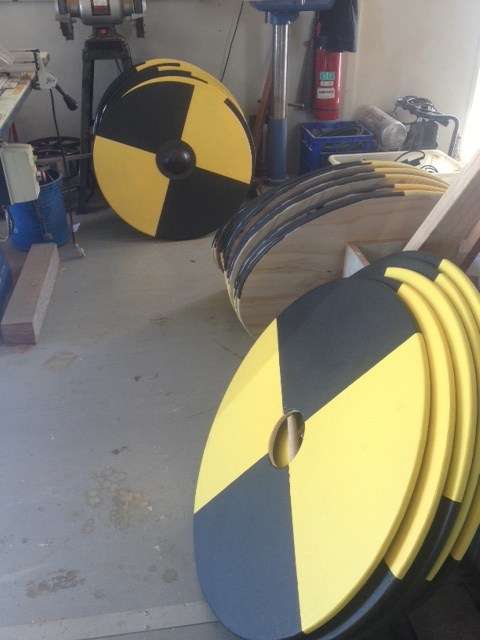 Shipwright and rigger Anthony Longhurst, more used to working on the rigging for the museum’s HMB Endeavour replica, has been given the job of developing and implementing the sail rigging.

Most information on Viking age vessels comes from archaeological finds, so there is little surviving detail of a typical ship’s rigging. There is evidence of a forestay, but none of a backstay – possibly the strengthened mast, supported by a mast partner, did not need it.

Some cleats for the shrouds were outside the vessel, and the shrouds were attached to a willow ring fastened to the cleat. Only remnants of what may have been rope have survived and there is debate as to whether they were made of hemp, walrus or seal skin, or even fibre from trees. 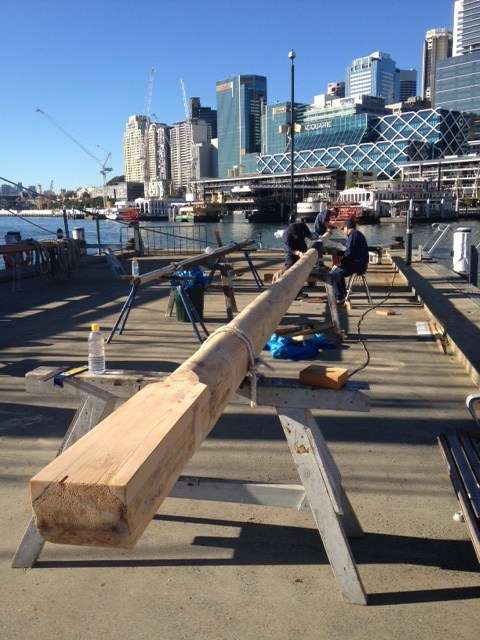 The mast will be stepped into a socket in the keelson – a timber that rested on the boat’s keel. The ability to quickly drop the mast was a feature of Viking age vessels and an ingenious method was developed where the keelson socket was rounded forward meaning the mast could slip in and out without having to lift it upwards.

A mast-partner aided in spreading the force from the sail through the hull and relieved the stress on the keelson. It was called a ‘mast fish’ because of its fish-like shape. 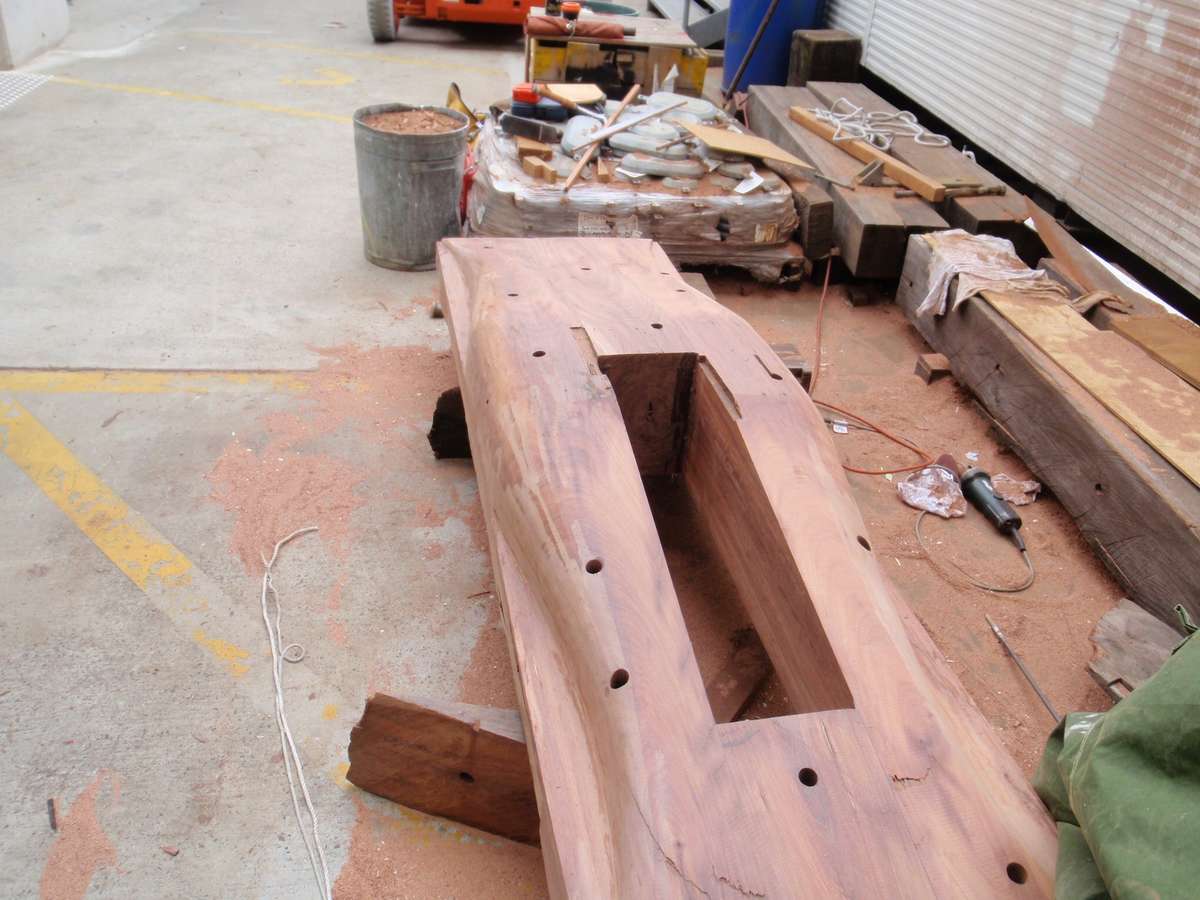 The mastfish was the most substantial piece of wood on a Viking age vessel. The Gokstad mastfish was a single piece of oak 5 metres long and 1metre wide. The fish for Jorgen Jorgenson is being made by contractor shipwright Orion Alderton.

Another important element of the vessel is being constructed by one of the museum’s preparators Stephen Crane. Another behind the scenes area of the museum that people rarely see, preparators are often required to make all sorts of weird and wonderful props, object supports and structures. Stephen is crafting a scroll based on the Oseberg ship burial find for the prow of the Jorgen Jorgenson. 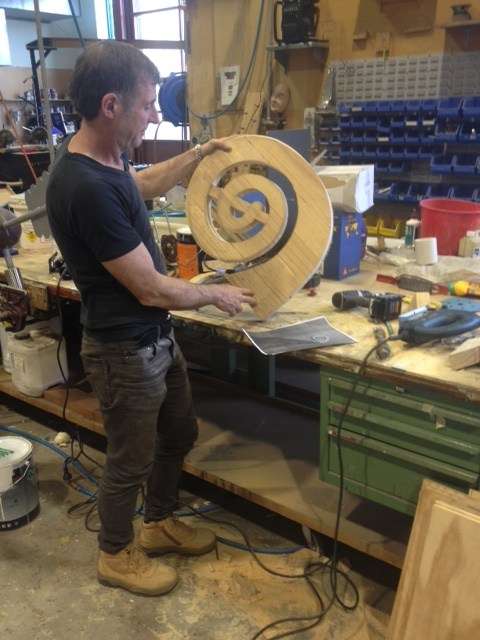 Museum preparator Stephen Crane with the Oseberg scroll in production

Although the deadline for sea trials is fast approaching, all these skilled workers and tradespeople are pulling out all stops to have the vessel ready. Even the manager of museum Operations Peter Rout is getting into the Viking spirit of things… 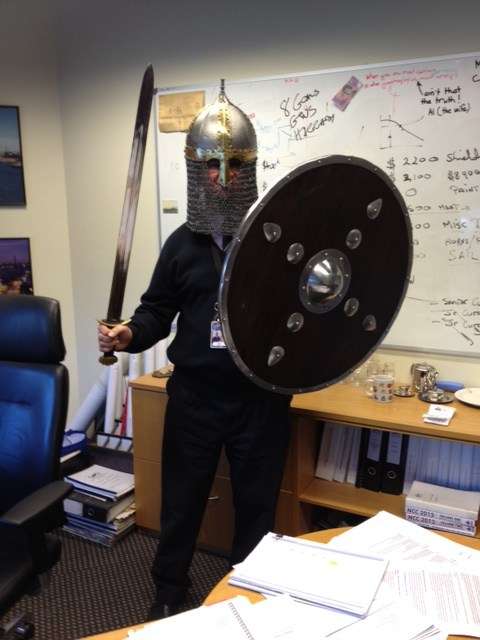 Peter Rout going ‘a viking’ in his office.