Readers may have seen a rather strange looking bright green double-ended wooden vessel moored under the Anzac bridge at Pyrmont for several years now. On close inspection, there is no mast, an open deck and oar holes along each side. Although clinker built, it is not your traditional Australian wooden sailing vessel. But what is it? 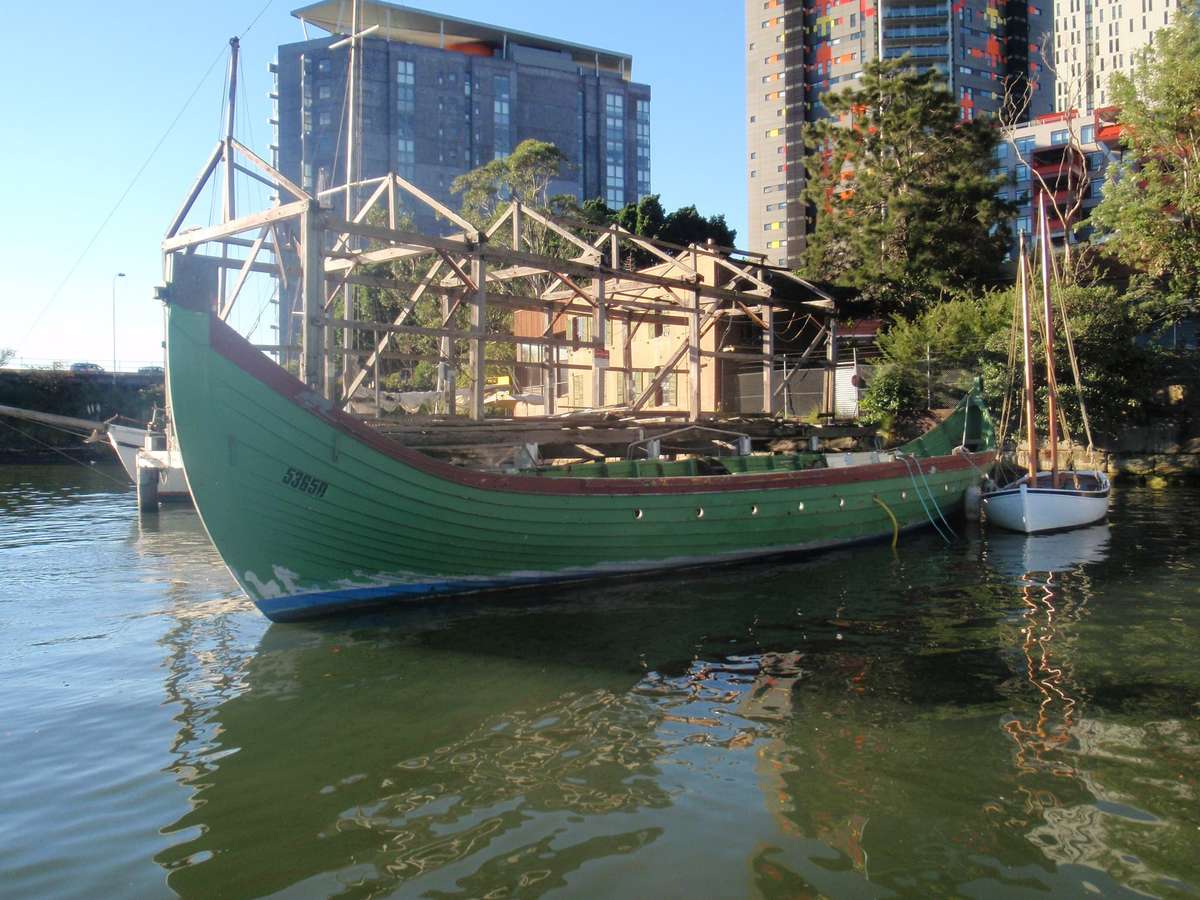 The bow and stern are identical and rise sharply, and this is a clue. If you imagine a single mast and spar with a square sail, and perhaps a dragon head carving on the prow, you will get the picture – it is a Viking longship.

Well, not a longship technically. It is a reconstruction of the famous Gokstad vessel, which was actually a karvi – a ship used by Viking Age chieftains to cruise the Scandanavian coastal waters and rivers. A true longship, used for raiding overseas, would have been much larger, with possibly over 60 oars rather than the 32 on this vessel.

Still, at 23 metres long this karvi could take up to around 70 heavily armed Viking Age warriors for a trip through the Norwegian fjords. 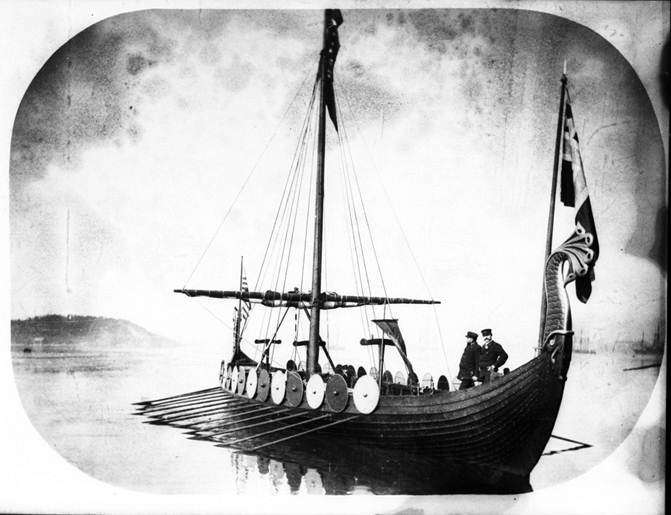 The Viking caused a stir at the World Exposition which was celebrating the ‘discovery’ of North America by Christopher Colombus as it added weight to evidence that Scandanavians had in fact been there long before Colombus.

The original Gokstad ship – built around 900, over 1,000 years ago – was recovered from a Viking Age burial mound in the late 19th century and is on display at the Viking Ship Museum in Oslo, Norway. A replica, called Viking, was made in Sandefjord, Norway, in 1892 and in 1893 it sailed from Norway to Chicago to the World’s Columbian Exposition.  Captain Magnus Anderson paid high tribute to the seaworthiness of the vessel. After featuring in the World Exposition it languished for many years and is currently being preserved and restored by the Friends of the Viking Ship group in Illinois, USA. 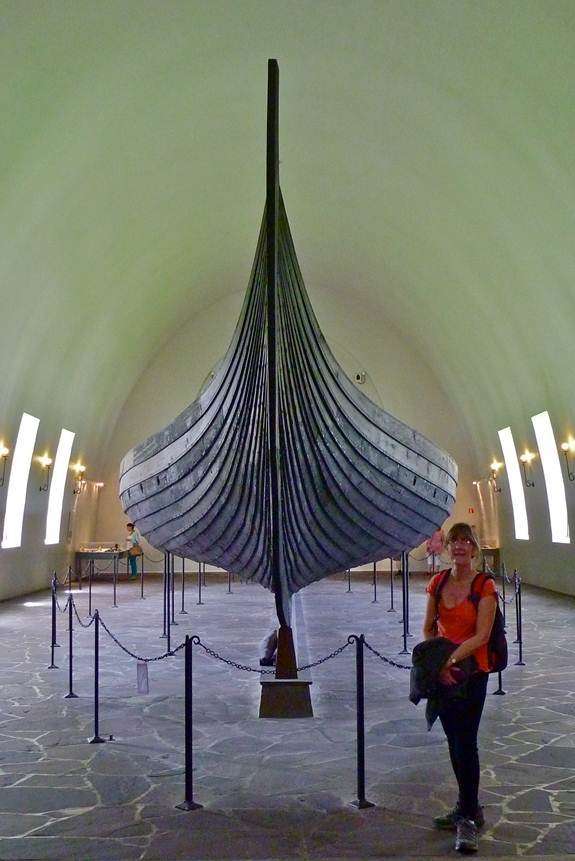 Clare Payne with the Gokstad find at the Viking Ship Museum in Oslo. Courtesy of ANMM Curator David Payne.

Our vessel – named the Jorgen Jorgensen – was built and launched in Perth in 1987. While it is not a faithful replica, made with Viking Age tools, using hand forged rivets and Norwegian oak trees, it is an evocative reconstruction and when it is in sailing order, will give us a good understanding of the workings and capabilities of a Viking Age vessel.

The ship was named after the Danish ‘adventurer’ Jorgen Jorgenson (1780-1841) who led a colourful life in colonial Australia in the early 1800s and then again in the 1830s – transported as a convict to Tasmania.

Since 1987 Jorgen Jorgensen has operated as a charter vessel but the last few years had seen it languish. Since 2008 the restoration of the vessel has been part of a community outreach plan driven by the Pyrmont Heritage Boating Club, who operate just along the harbour from the museum. 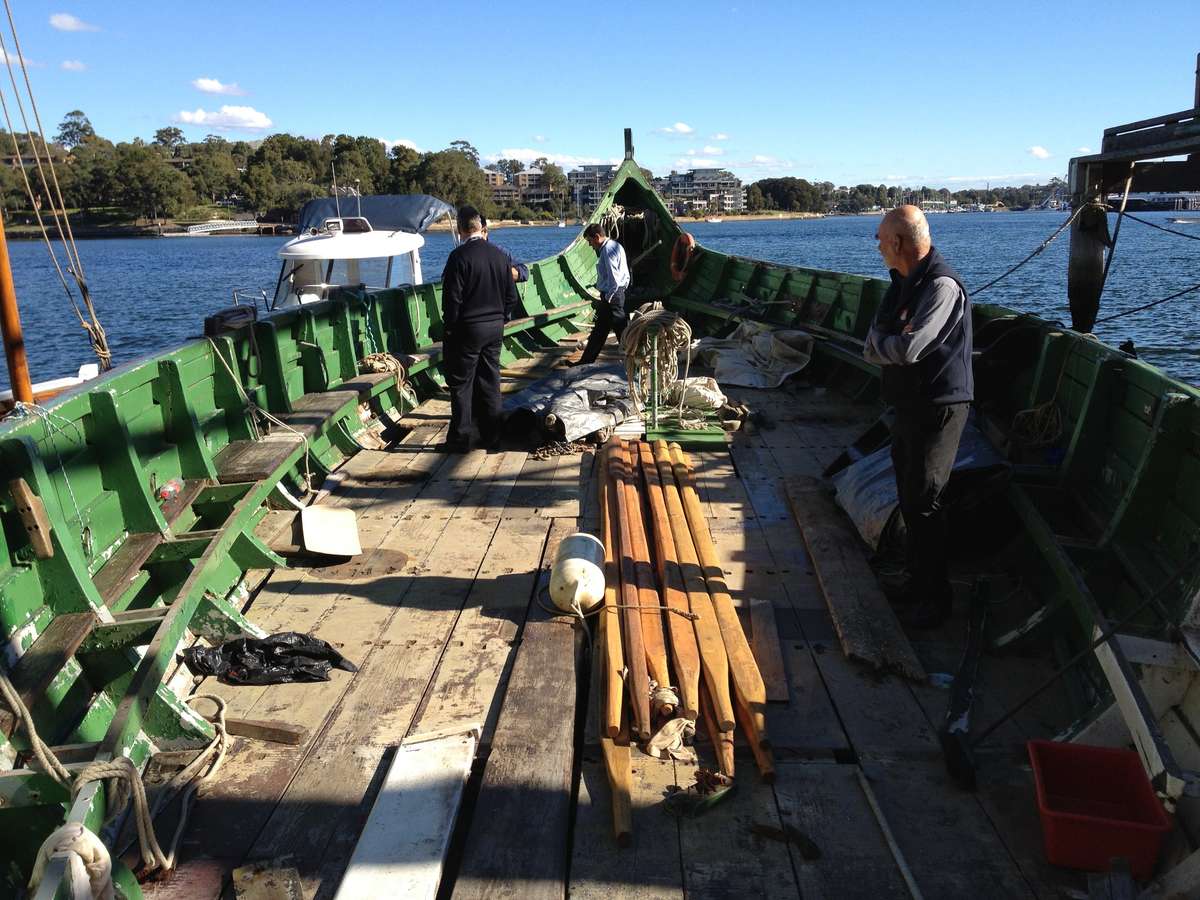 The Pyrmont Heritage Boating Club was established in 2005 with the mission to ‘revive inner city boating, engage youth in heritage, community and maritime industry and to provide community access to harbour culture.’

The club’s ‘Longship Project’ engages long term unemployed, disabled and disadvantaged people in restoring the vessel – one of only four known reconstructions of the Gokstad ship – to an authentic sailing condition. The project aims to operate the vessel as a mentoring, sail-cadetship and leadership training enterprise for the local community. The Pyrmont Heritage Boating Club works with schools, colleges, youth mentoring programs, Job-Search and TAFE outreach training and is building a project that will ‘combine skill-acquisition with creative pride, physical excitement and a connection to the environment of Sydney Harbour.’ 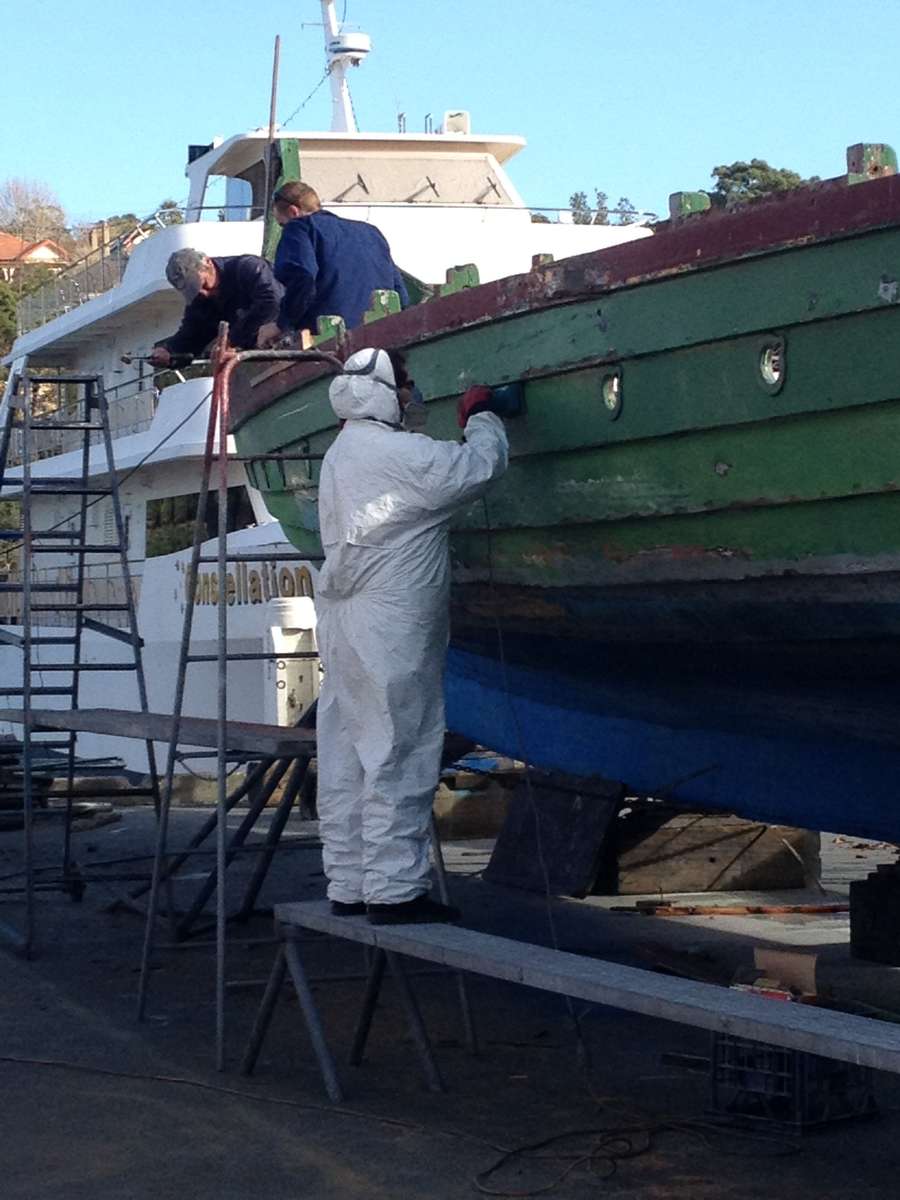 Working on the vessel at Noakes Shipyards

The Australian National Maritime Museum has established a collaboration with the Pyrmont Heritage Boating Club to assist in completing much needed restoration and major work on the vessel. A mast will be stepped and a cradle installed on the deck so it can be easily raised and lowered, one of the features of Viking Age vessels. With the help of the museum’s Fleet staff and volunteers, the ship will be painted and major work conducted above and below the waterline. A sail, rigging, oars, sea-chests for rowing seats and shields lining the gunwales will complete the picture and this reconstruction of the Gokstad vessel will be the centre-piece of the exhibition opening ceremony. It will be on display for inspection at the museum wharves.

In fact, from September this year Darling Harbour will be the home for three Viking Age boats with the arrival of the exhibition Vikings – beyond the legend at the Australian National Maritime Museum. The exhibition includes two smaller vessels that are highly authentic reconstructions of Viking Age finds. Along with the Jorgen Jorgensen they will show some of the diversity of Viking Age vessels.

The Krampmacken is 8 metres in length and was designed for both the Baltic sea and the riverways of Eastern Europe. It has a large, braided square sail, three rowing stations and can take a crew of 10 to 11. It was constructed in the early 1980s and in 1983 was sailed and rowed from Gotland in Sweden to Istanbul (or Miklagard as the Norse called this great city) in Turkey, showing just how the Scandanavians managed to travel to the Near East at the height of the Viking Age (circa 750 to 1100).

Both these replica vessels are part of the exhibition developed by the Swedish History Museum, Stockholm in partnership with MuseumsPartner, Austria and coming to the museum from September 19th 2013.

Stay tuned to this blog to find out more about the longship project and to see regular progress updates on getting a Viking Age vessel ship shape!