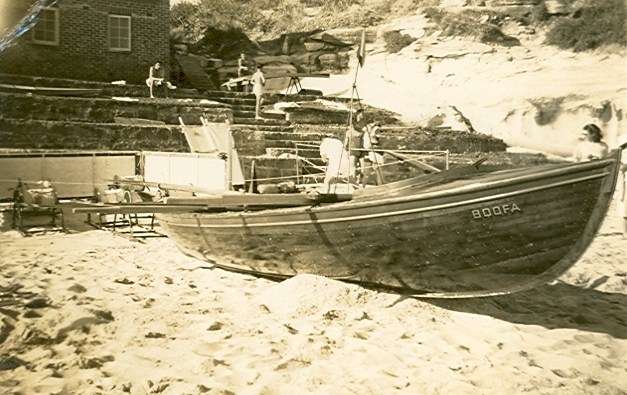 Famous throughout Australia as a symbol of the surf, surf clubs and the surf lifesaving movement, the surf lifesaving boat is an Australian class of boat evolved to suit the coastal beaches. It has since found its way to other countries, such as New Zealand, which have also developed a strong surfing tradition. It is rowed by a crew under the command of the sweep, who stands aft steering with a long sweep oar over the transom.

The craft became a distinct vessel in 1913 when the Manly Club in Sydney acquired a boat that then became the standard model. Prior to this the other boats that had been used included vessels similar to the Royal National Lifesaving Society craft in the UK and a variety of other local craft such as butcher boats and whalers, with mixed success.

The Manly boat was designed by Fred Notting, who after much research based his ideas for the 20 foot long craft on Norwegian work boats. It was built by Holmes in Lavender Bay and became known as the “banana boat” as the double ended craft carried an extreme amount of curvature or rocker to the profile shape of the keel, stem and stern. It also featured metal buoyancy tanks in its high end boxes and had Notting’s invention of the quarter bar for the sweep to brace against as an aid to steering the boat with the large sweep oar on the centreline over the stern.

Known collectively as surf boats, three of these craft are listed on the Australian Register of Historic Vessels. Also listed is an inflatable boat, the prototype of the craft that have since superseded the rowing craft.

Boofa was built by Towns Bros. in Newcastle in 1946, for the North Curl Curl Surf Life Saving Club (SLSC) in Sydney NSW. It is one of the few surviving examples of a double- ended surf boat built along the lines of the standard pre-war surfboat pattern. BOOFA was seam batten construction, and named after its donor’s watch dog, an over friendly Alsatian called ‘Boofa’. 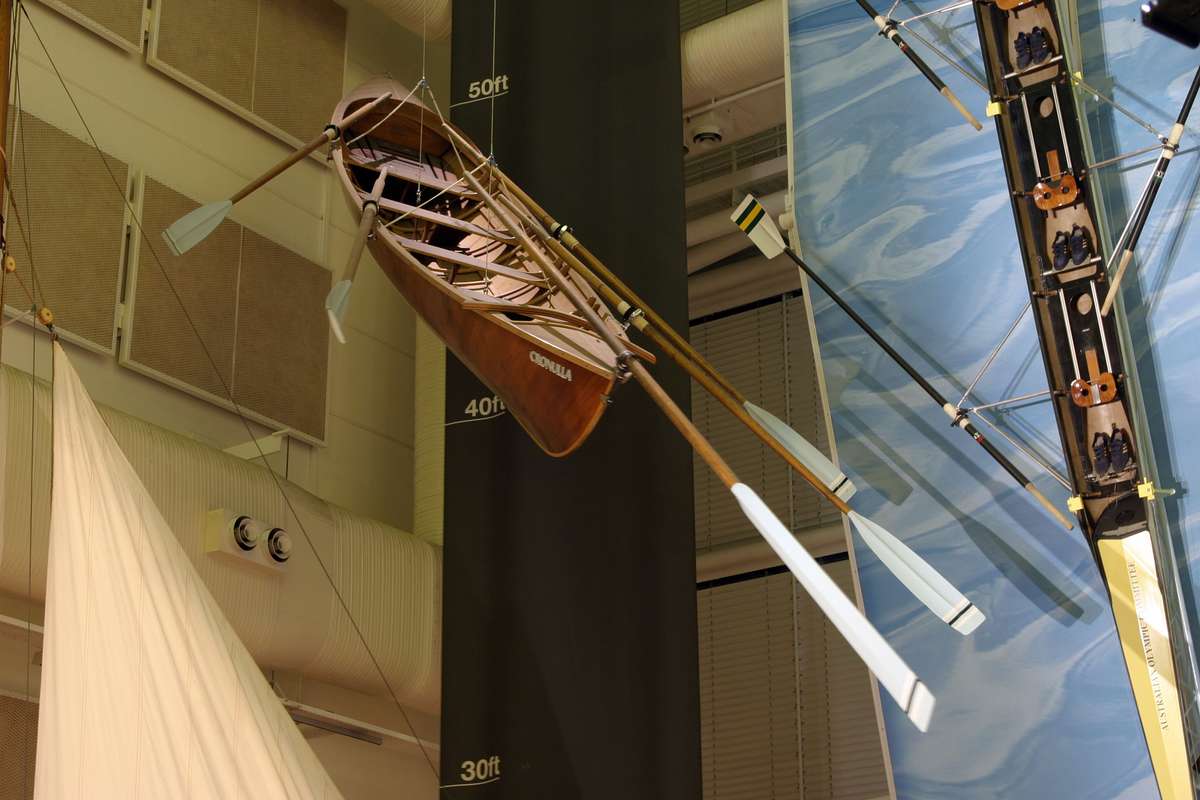 Kurrunulla on display in Watermarks in the museum.

Kurranulla represents the final evolution of the double-ended hull form, and used the more advanced cold moulded wooden hull construction. Its shape was obsolete when it was built in 1964. By the end of the 1940s, the tuck or transom-sterned hull had been developed. It was shown to be faster for racing and just as capable in the surf for rescue work and by the 1970s had completely replaced the older double ended hull shape. 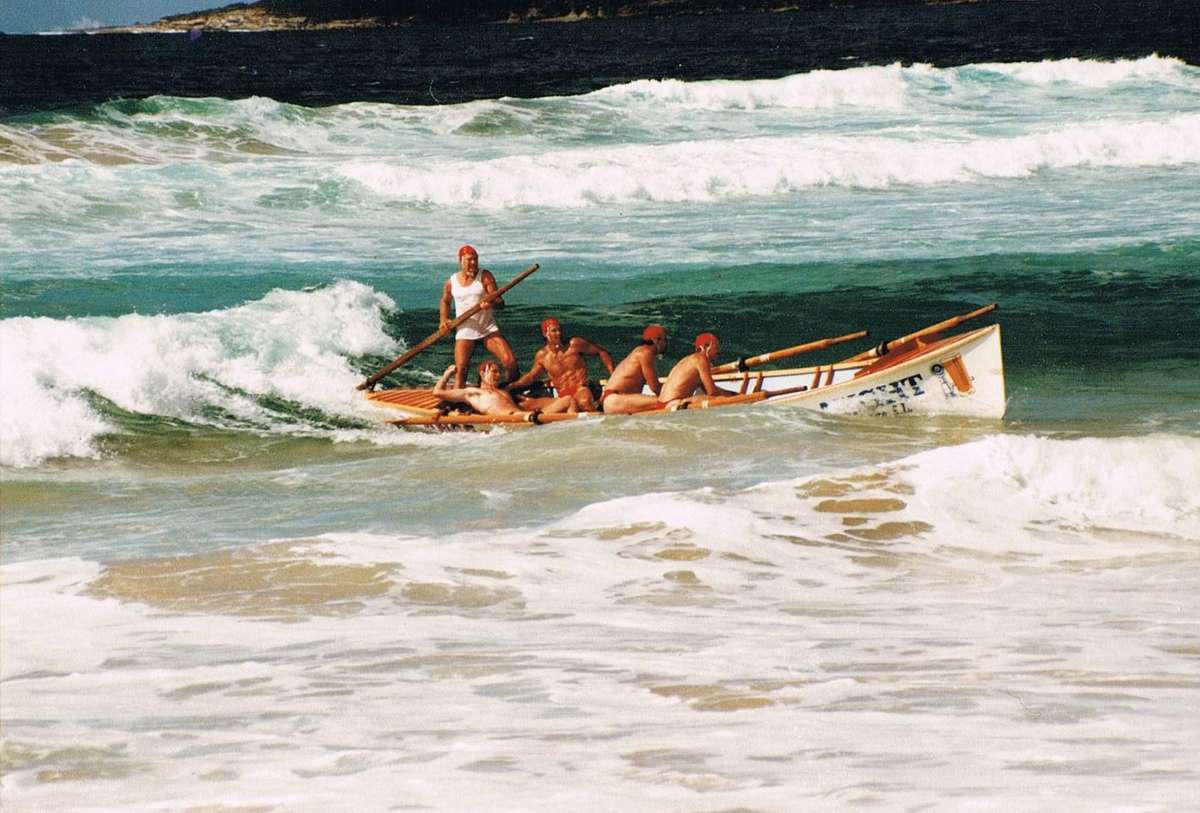 The Carlton Draught Surfboat coming to the shore

The surf rescue craft also raced at surf carnivals. The Carlton Draught surf boat was built and purchased by the Grange SLSC in South Australia largely for its racing potential. It was constructed with Kevlar laminates around a foam core. The hull was then fitted out internally with mountain ash and imported western red cedar. The boat was also fitted with bilge pumps, driven by 12-volt motor-cycle batteries fitted under the No 3 seat.

This was a more recent addition to the competition rules and had made a remarkable difference to surf rowing around that time as crews were now able to rely on mechanisation to empty water taken in as they negotiated waves at the break line onshore. This was to prove more than just helpful in the Grange crew’s quest for the Open Men’s Surfboat National Championship title.

The National Championships were conducted at Cronulla Beach in NSW in 1988, and the semi-finals took place in huge seas. The Grange boat was swamped at the start, but the pumps gradually dumped the water and the crew rowed on rounding the turning buoy in last place. Ahead of them a set of big swells began to exact punishment on the boats ahead, and one by one the other five wiped out as they approached the shore. The Grange crew slowed and held their boat off a dangerous wave, then took a better set to the finish. They won as the only one still afloat. In the final, they led from the start, and claimed SA’s first and only open men’s senior title.

IRB1 and its U-shaped rubber hull

By this time the rowing craft were also obsolete from a rescue perspective; they had been replaced by outboard powered inflatable craft. IRB 1 was designed and built in 1970 to specifications compiled by Warren Mitchell after trialling a UK-designed inshore rescue craft in 1969.

It is 3.6 metres long, and the main inflatable ‘u’ shaped hull is made from nitrile rubber. The heavier non-inflating rubber bottom between the two cylindrical pontoon sides has an aluminium keelson (originally steel) and a plywood floorboard on the inside. The plywood transom board supports a 15 kw (20 hp) outboard which featured a protective wire grill and sheet metal cylinder guard around the propeller for safety in the surf amongst swimmers. The craft had polypropylene life lines along each pontoon for people to hold onto, and foot straps in the floor to help secure the crew in the boat as it bounced through and over waves

IRB 1 showed that small manoeuvrable craft manned by two people (a coxswain and bowman) could move more swiftly in response to an emergency than traditional craft, and could be used by both men and women successfully. It also replaced the belt, line and reel.

IRB 1 became the first inflatable rescue boat owned and operated by a Surf Life Saving Club in Australia when it was put into service at the Avalon Beach Surf Life Saving Club in 1970. Dunlop Australia produced and marketed a range of rubber products and built the craft at their Bayswater, Victoria, factory. By the late 1980s almost 400 IRBs were in use at surf clubs around Australia.

As well as being on the ARHV; Boofa, Kurrunulla and IRB1 are held at the museum in the National Maritime Collection, and Kurrunulla is on display in the Watermarks Gallery. The Carlton Draught boat is in the collection of the South Australian Maritime Museum.