Mine was not the sort of life to make one long to coil up ones ropes on land, the customs and ways of which I had almost forgotten… I was born in the breezes, and I had studied the sea…

In the midwinter of 1892, a sailor by the name of Joshua Slocum arrived in the seaside town of Fairhaven, New Bedford, to view a ship. Heading away from the water, he set out to a nearby field where, propped up and under a cover of canvas, was an antiquated sloop called Spray.

Slocum was an accomplished sailor, having worked for many years in commercial shipping. He was born in Nova Scotia in 1844 and had followed his ancestors to the sea at age 16 where, over the course of a long career, he developed into a skilled sailor and navigator. He had captained many ships and had built them, but by the late 1800s the age of sail was coming to an end and so was Slocum’s professional prospects.

And so, in that field in Fairhaven in 1892, as Slocum surveyed the dilapidated Spray, there were two soon-to-be relics of the sea. 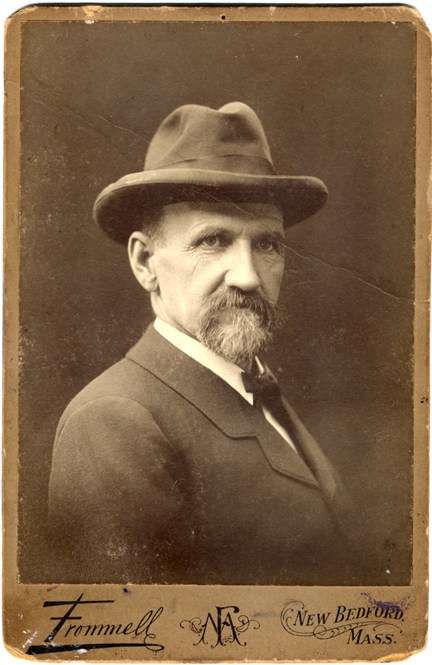 An old whaling-captain friend had offered Slocum the Spray and, in the absence of other opportunities, he set about restoring the vessel, beginning in the chilly American May. By the following spring Spray was a new boat. Slocum’s expert hands had shaped the vessel’s new timbers and worked along its every inch. He was now as much a part of Spray as the local oak that reached along her keel.

After reintroducing Spray to the water, where ‘she sat like a swan’, Slocum spent a season working as a fisherman, an occupation he claimed to have no talent for. But this was no matter, for Slocum had grander plans afoot for himself and his little sloop.

I had resolved on a voyage around the world, and as the wind on the morning of April 24, 1895, was fair, at noon I weighed anchor, set sail, and filled away from Boston… (page 11)

To circumnavigate the world is still an incredible feat. To the middle-aged Slocum, contemplating the journey alone in 1895, it was not only ambitious, but historic. He would be the first person in history to do so.

Chart of SPRAY’s course around the world. From ‘Sailing Alone Around the World’ (1900), digitised through Project Gutenberg (p 30)

In the three years, two months that it took for Slocum to complete his circumnavigation, he experienced a wide variety of humanity and geography, stopping in places such as Rio de Janeiro, Samoa, Keeling Cocos Islands, South Africa, Australia and the West Indies. In Samoa he visited the widow of Robert Louis Stevenson who, seeing a little of her husband’s spirit in Slocum’s voyage, pressed upon him a set of inscribed books that were added to the small library in Spray’s cosy living space. For many miles Slocum sailed with Spray’s tiller lashed, leaving him free to attend to other things. In Tierra del Fuego, South America, he avoided tribesman in canoes who hunted in Spray’s wake and tested his security on several occasions, and after leaving Gibraltar he had a brief encounter with pirates. Aside from the obvious dangers, what makes Slocum’s accomplishment all the more remarkable is that he disregarded the use of new navigational technologies such as a chronometer to instead skilfully rely on dead reckoning, complex calculations, lunar observations and instinct to guide Spray – surely a combination of his long acquaintance with the sea and the salt water in his veins.

I was en rapport now with my surroundings, and was carried on a vast stream where I felt the buoyancy of His hand who made all the worlds. I realized the mathematical truth of their motions, so well known that astronomers compile tables of their positions… (Page 148.)

Slocum visited Australia during his historic voyage and arrived in Sydney on 10 October 1896. Despite his low-key departure in April 1895, news of Slocum’s remarkable journey had spread and reached Sydney before him, where the reception was ready. Mark Foy, Commodore of the Sydney Flying Squadron, presented Slocum with a new set of sails for Spray (seen in the image below), and the vessel was invited to be the flagship at the Johnstone’s Bay Flying Squadron’s annual regatta. 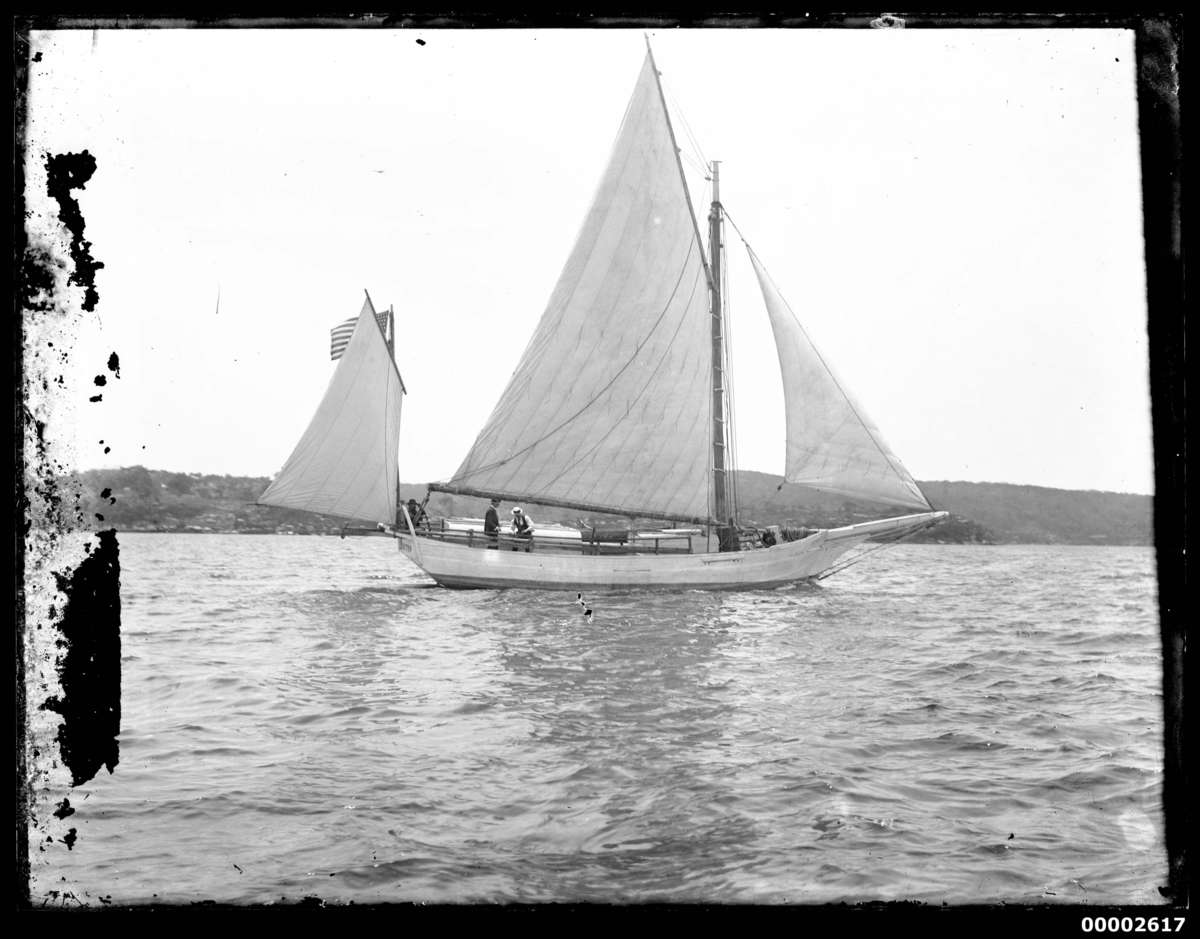 SPRAY displaying the new sails presented to Slocum by Mark Foy during his visit to Sydney, October 1896. ANMM Collection 00002617

Slocum was already quite familiar with Australia, having sailed there many times as a merchant seaman. In 1871 he was married in Sydney, to American-born Virginia Walker whose parents had relocated with her to Australia during the Gold Rush. (Virginia sailed extensively with Slocum, and the couple had seven children before her death in South America in 1884.)

After leaving Sydney, Slocum and Spray headed south to Melbourne. Throughout his voyage, Slocum was waived port charges in all but two places; Pernambuco and Melbourne – where the collector insisted on his six shillings and six pence. Slocum more than recouped these fees however, by charging the large numbers of curious visitors who came onboard Spray during the month he spent in Melbourne. Slocum caught a large shark while Spray was moored in St Kilda and, upon slitting it open, found 26 pups which were kept alive for a day in a canoe full of water. Hauling his gory trophy onboard, Slocum increased the charges for visitors before stuffing the carcass with hay and, during the next stopover, presenting it to the curator of the Victoria Museum of Launceston (now the Queen Victoria Museum and Art Gallery), where its jaws remain to this day.

The shark on the deck of the SPRAY. ‘Sailing Alone Around the World’ (1900), digitised through Project Gutenberg, p174

After returning to Fairhaven in 1898, Slocum published an account of his journey under the title Sailing Alone Around the World (1900) which became a bestseller, cementing his fame and reputation as a great sailor.

Within this chronicle, Slocum not only records his achievements as a seafarer, but reveals himself to possess the eloquence of a poet. Slocum’s story contains the basic elements of a wonderful narrative; adventure, near-death experiences, human kindnesses, however the perspicuity of his writing conveys much more. A man and his boat, alone on the wide, wide sea. His solitude is stark and it is celebrated; in conversations with the moon, a ghostly captain or the guiding sea pattering against Spray’s side in ‘grateful music’. Slocum conveys powerfully the experience of the adventurer; vividly describing places on earth that only he had ever seen and will ever see, on the ever changing surface of the sea.

Upon leaving Australia Slocum wrote “For me tis left to tell only of pleasant experiences, till finally my adventures are prosy and tame”, however there would never come a time for Slocum when his life would become prosy and tame. In November 1909, Slocum and Spray disappeared soon after departing on a new adventure to South America, perhaps enveloped by the sea that for so long had been their guardian.

Every particle of water thrown into the air became a gem, and the Spray, bounding ahead, snatched necklace after necklace from the sea, and as often threw them away… Her good angel had embarked on that voyage; I so read it in the sea…

(Sailing Alone Around the World, page 12)

Read about the voyage of the SUNBEAM, the first private yacht to circumnavigate the world in 1876-7.

Slocum’s journey has been recreated in several interactive ways online. You can watch his journey unfold using Google Earth here, with the relevant chapters of Sailing Alone Around the World linked to each leg of the voyage.

Read about the 1996 centenary of Slocum’s visit to Sydney in the museum’s quarterly magazine Signals.