Recently Olympian and long distance swimmer Linda McGill visited the museum with a group of friends and family, escorted by Geoff Provest, the NSW Member for Tweed and Parliamentary Secretary for Police and Emergency Services, and staff from the NSW Department of Tourism. 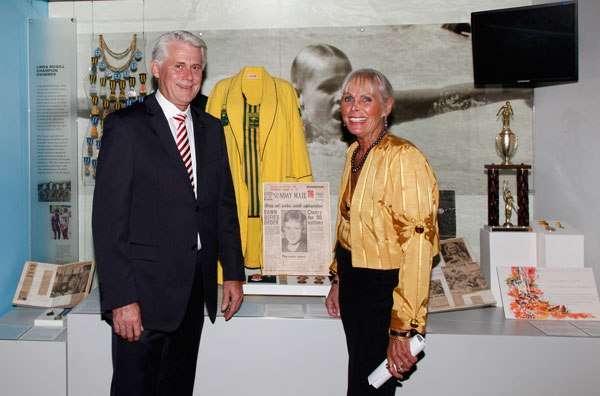 Geoff Provest and Linda McGill in front of the McGill showcase highlighting Linda’s swimming life, at the museum.

Geoff, a regular visitor to the museum, was excited to see Linda’s story in the museum’s Watermarks display, in one of our core exhibitions about adventurers and sporting achievement. Entitled Voyagers, this space features Australians who push themselves both physically and mentally, to attempt feats most of us would never dream of trying. This could be swimming the English Channel in Linda’s case; sailing alone around the world like Kay Cottee; or even kayaking the world’s seas and coastlines with the epic seven-year voyage of German adventurer Oskar Speck and surf ski paddler Australian Jack O’Brien. 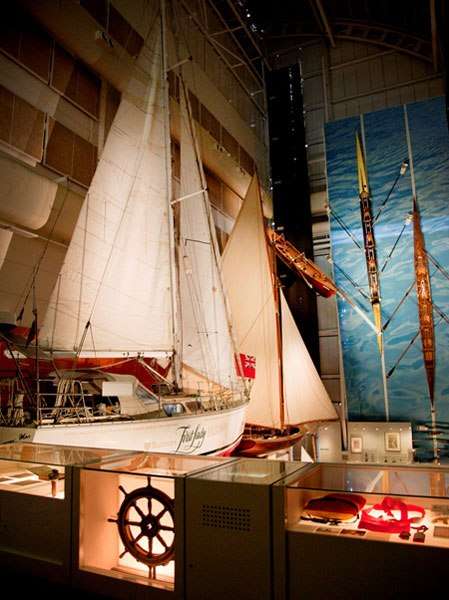 The Voyagers exhibition features those who push the boundaries. ANMM mezzanine, Watermarks gallery. 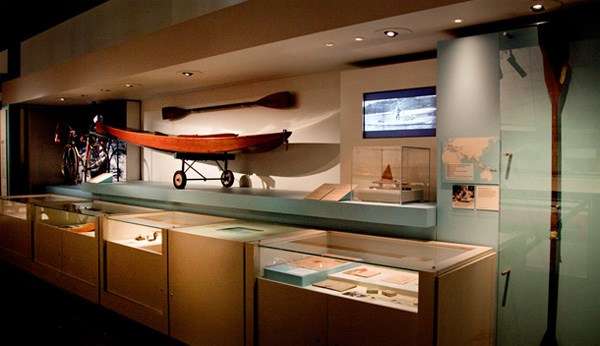 The Voyagers exhibition features those who push the boundaries. ANMM mezzanine, Watermarks gallery.

The Voyagers exhibition tells their stories, and shows something of their experiences and their motivations.

What is Linda McGill’s story? And what does it have to do with porpoise oil and cocoa? Or indeed with Lanolin and coca cola? 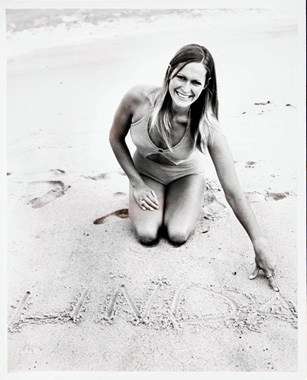 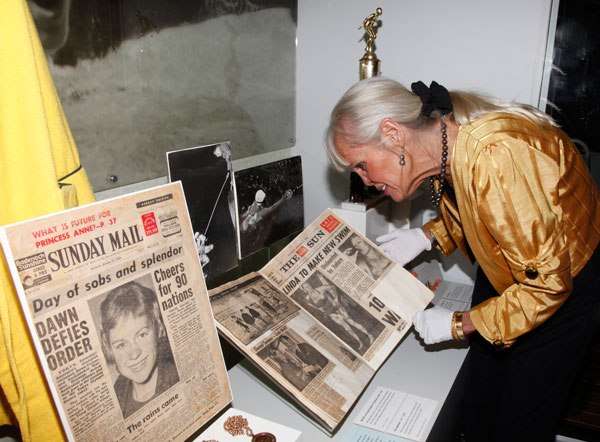 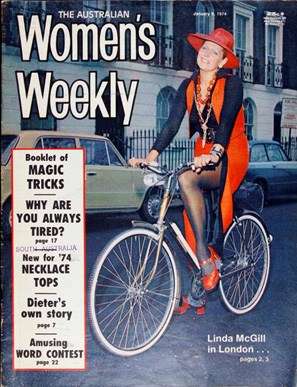 Linda McGill (born 1945) is an Olympian, a medley swimmer from Sydney who broke a number of state and Australian records in the lead up to the Perth British Empire and Commonwealth Games in 1962. She won a gold medal in the team medley at the Games and placed fifth in the final of the individual medley at the 1964 Tokyo Olympics. Just months later she embraced long distance ocean swimming and became the first Australian to conquer the English Channel, an unplanned shift and unexpected accolade. 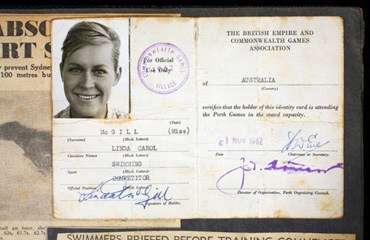 Linda‘s switch to endurance swimming came about after controversy at the Tokyo Olympic Games, which famously truncated the illustrious career of swimming colossus Dawn Fraser, Linda’s team and room-mate at the games. At the time the Australian Amateur Swimming Union did not allow athletes who were competing in the first days of competition to take part in the opening ceremony. Linda, then an 18 year-old multi-stroke swimmer, crept out to attend the opening. She was caught on the bus while Dawn remained hidden, but later left the village in a taxi with some rowers, watching the ceremony from the stands with her father. She was given a four year ban – a life time for a swimmer, while Dawn got up to more high-jinx, souveniring a flag and subsequently copping an incredible 10 year ban, amid public and media outrage. Two other athletes were given three year bans, all for allegedly flouting the authority of team management in flaunting their larrikin spirit. 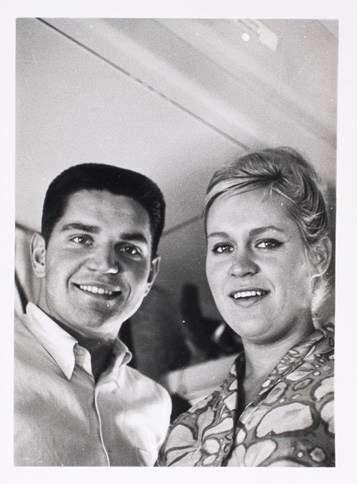 John Konrads and Linda McGill on the flight back from Tokyo with the swimming team which was flown back while the Games continued. They were unaware of the ban to follow. ANMM Collection

Later that year, Linda and fellow swimmers Ilsa Konrads and Ruth Everuss travelled to London via a swimming tour in Sri Lanka, where Linda learnt of her ban. Shattered and bewildered, she picked herself up and reinvented herself, turning to distance swimming, setting her sights on the English Channel. Free of amateur restrictions she could now earn money and garner sponsorship from her swimming. It was not easy though.

Five months after the games, on the other side of the world from her Australian home, coated in lanolin and fuelled by coca cola Linda entered the cold water in France and swam the current-riven waters for more than 32 km to England over 11 hours, 12 minutes –  becoming the first Australian ever to successfully swim across the English Channel. 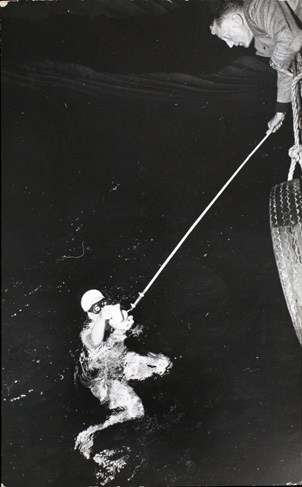 Linda taking sustenance – Coca Cola – in the waters of the Channel. Also gulping seawater, she became quite ill with a stomach upset. Reproduced courtesy Linda McGill

Linda made this swim two more times, determined to break the women’s 10 hour barrier. In 1967 on her third crossing, she achieved her goal, swimming from Dover to Cap Gris Nez, near Calais, in nine hours and 59 minutes!

Linda’s marathon conquests read like a cavalcade of distance crowns – the Channel (three times), Sydney Harbour, Port Phillip Bay, Hong Kong Island, Manhattan Island, the Arabian Gulf. Her achievements belong in a genealogy of Australian long distance swimmers – with women like Susie Maroney (born 1974) following her. Susie holds the record for the fastest female two-way English Channel crossing (England – France – England) when she was 17 in 1991, with a time of 17 hours, 14 minutes. It also includes Susie’s early mentor, multi-channel swimmer Des Renford and many others. At six hours, 55 minutes Australian Trent Grimsey currently holds the record for the fastest verified Channel swim from 8 September 2012. 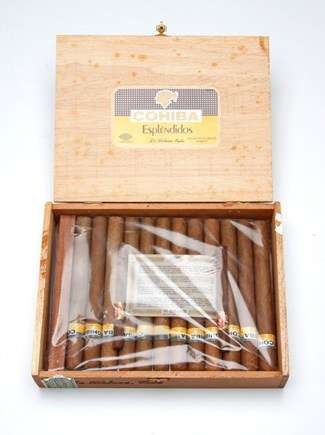 Cuban Cohiba cigars in humidor presented to Susie Maroney in 1999 by a Cuban official to commemorate her four marathon swims centring on Cuba from 1996-99. The sticker on the lid bears the signature of former leader Fidel Castro, whom she met in Havana. ANMM collection

Long before all of them was Sydney woman, Annette Kellerman (1886-1977), the ‘million dollar mermaid’, swimmer, vaudeville and silent film siren. Kellermen’s tale is similar to McGill’s, she left 110 yard lengths for long distance swimming after she arrived in England in 1905.

Kellerman attempted to cross the Channel three times from 1905. Nauseous from gulping seawater and Cadbury’s cocoa (supplied by a sponsor, like Linda McGill’s coca cola!), and slathered in porpoise oil, Kellerman eventually surrendered, after 10 and a half hours of being bashed by the Channel waves, pulled by the currents and stung by the winds.

“I had the endurance but not the brute strength… I think no woman has this combination: that’s why I say that none of my sex will ever accomplish that particular stunt.”

Twenty years later this feat was achieved when New Yorker Gertrude Ederhle crossed in 14 hours, 31 minutes in 1926. It was nearly 50 years later when Linda became the first Australian to swim the Channel – with her time of 11 hours, 12 minutes.   Linda retired from swimming in 1989 after nearly four decades of competition – from sprinting in the municipal pool school events to doggedly traversing stretches of the world’s oceans. Today she lives on the Gold Coast, where her marathon swimming predecessor Annette Kellerman had retired from the United States in the 1970s.

In the last few years she has had further mental challenges with treatment for facial skin cancer necessitating radical nasal surgery, a result of a life spent in the water, in an era when awareness of the damaging effects of the sun was limited. Linda still swims three times a week.   Museum curator Penny Cuthbert and I were pleased to show Linda, her family and friends her swimming life  set beside those of other Australians who have pushed their personal, physical and emotional boundaries, in this core Voyagers exhibition – an exhibition exploring the voyage as metaphor. 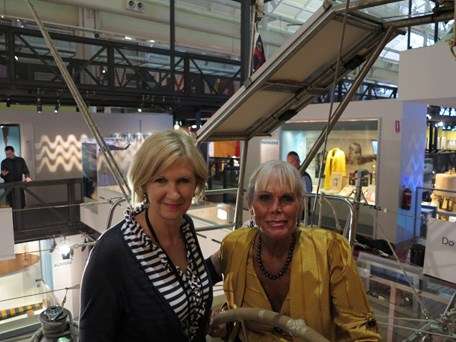 Pioneering woman adventurers – Linda McGill, the first Australian across the Channel, with me on board Blackmores First Lady, the pioneering circumnavigator Kay Cottee’s yacht which is fitted out down below and open for tours in Voyagers.

View all posts by Daina Fletcher→
Posted in: Exhibitions , From the collection , Arts and Culture