On 15 October 1904, a ‘young skipper’ with a ‘bright future’ brimming with promise was born. Alexis François Albert took to sailing as if it was in his blood. In conjunction with the success his father Frank enjoyed with Rawhiti, Alexis skippered the 21-foot yacht Boomerang. However, it was with the eight-metre yacht Norn that he truly shone. Combined with his success on the water, J Albert and Son also flourished as he assumed the mantle of managing director in 1931, aged 27. As J Albert and Son progressed and Alexis pursued his passion for sailing, the advent of television in 1956 and the rock n’ roll era of the 1960s and 70s changed the face of the entertainment industry. One man stepped forward with the creative vision that would harvest a string of chart-topping hits and dramatically shape Australia’s cultural landscape for years to come. This is the next instalment of the Albert family story.

From a very young age, Alexis was consistently exposed to both the workings of J Albert and Son and to the world of sailing. Following their father’s lead, Alexis and his elder brother Otto were involved with Sydney’s Royal Motor Yacht Club and were regular competitors in handicaps at Rose Bay on board their little launch Baby Revonah. After Otto died of meningitis in 1914 aged just 14, Frank and his wife Minna became very protective of their only surviving child (Jane Albert, House of Hits, p 60). In 1918, Alexis joined the Royal Australian Naval Volunteer Reserve, was posted at the navy base HMAS Ruschcutter and eventually served as commanding officer of the coastal minesweeper HMAS Paterson. In May 1925, The Australian Motor Boat and Yachting Monthly (AMBYM) noticed the ‘young skipper’ as a rising star. In the same year, Alexis joined the Royal Sydney Yacht Squadron (RSYS), a club he remained committed to, becoming rear commodore in 1959, vice commodore in 1968 and commodore in 1971. 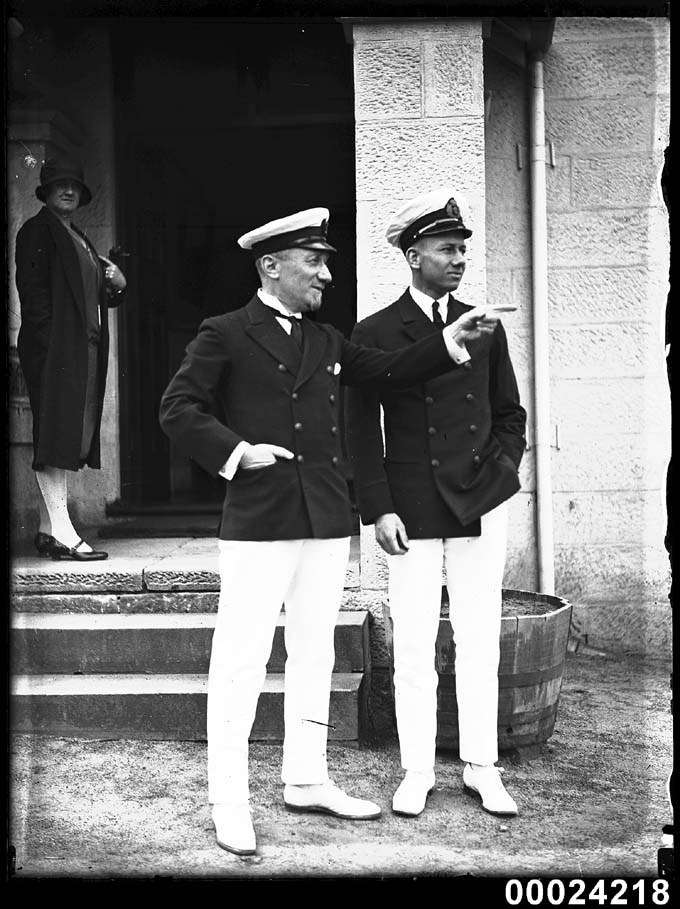 Alexis Albert with Johan Ausler Anker, who designed and built Alexis’ yacht Norn. This photograph was taken when Alexis visited their yacht building yard in Norway. It was published in The Australian Motor Boat and Yachting Monthly, 5 November 1930, page 11

In 1927, he purchased the Norwegian eight-metre yacht Norn from Lord Henry Forster, the ex-Governor-General of Australia. Originally named Varg, it had been built by Anker and Jensen in 1924. Lord Forster raced it for two seasons and was successful at Cowes Week in the Isle of Wight, England before he sold it to Alexis. The yacht was placed on board SS Port Nicholson for the long journey from England to Australia. It arrived in November and within a couple of months, Alexis won Australian yachting’s ‘premier trophy’ – the Sayonara Cup. His proud father gushed to the AMBYM saying, ‘my son’s yacht has succeeded, winning the coveted Sayonara Cup and I feel very proud of him’. A cable was also received from Lord Forster which simply read, ‘Warmest congratulations. Bravo Norn.’ Alexis competed in the 21-foot yacht Boomerang and Norn from season to season, and on one occasion during the Sydney Amateur Sailing Club’s Handicap yacht race in November 1928, Alexis raced Norn against his father in Rawhiti. Over the next few years up to the 1950s, Alexis continued his success in Norn winning many championships including the Basin Cup, Schooner Windward Plate, Gascoyne Cup, Alfred Milson Memorial Cup and Fairfax Cup. From around 1959, he also raced in the Dragon class yacht Norn II, enjoying further success on the water.

On 16 September 1929, Frank applied to the Board of Trade to have the name of his newly purchased the auxiliary schooner Bona changed to Boomerang. Boomerang is considered to be one of the most beautiful vessels ever designed by renowned marine architect Walter Reeks. It was launched in 1903 and originally owned by Charles Lloyd Jones, the owner of department store chain David Jones, before it passed to the Albert family. Boomerang is just over 22 metres long and from the 1930s, it operated under motor only and was used by the Alberts to entertain distinguished guests. Before Queen Elizabeth II and Prince Philip’s first visit to Australia in 1954, the Duke of Edinburgh had enjoyed a few trips on board with Alexis and his wife Elsa. On one occasion, Alexis described an experience with another of his guests, one Lord Louis Mountbatten:

I don’t think he ever relaxed … He was very kind and polite, but when we were leaving the yacht – it’s a naval custom for senior officers to board first and go ashore last – and of course my fellow henchmen were all standing back waiting for him to get into the tender and he was standing back too. I said, “Do you wish us to observe naval custom, sir?” And he said, “Certainly”, so I had to scurry them all into the naval tender and he left last!
~ Albert, House of Hits, p 118 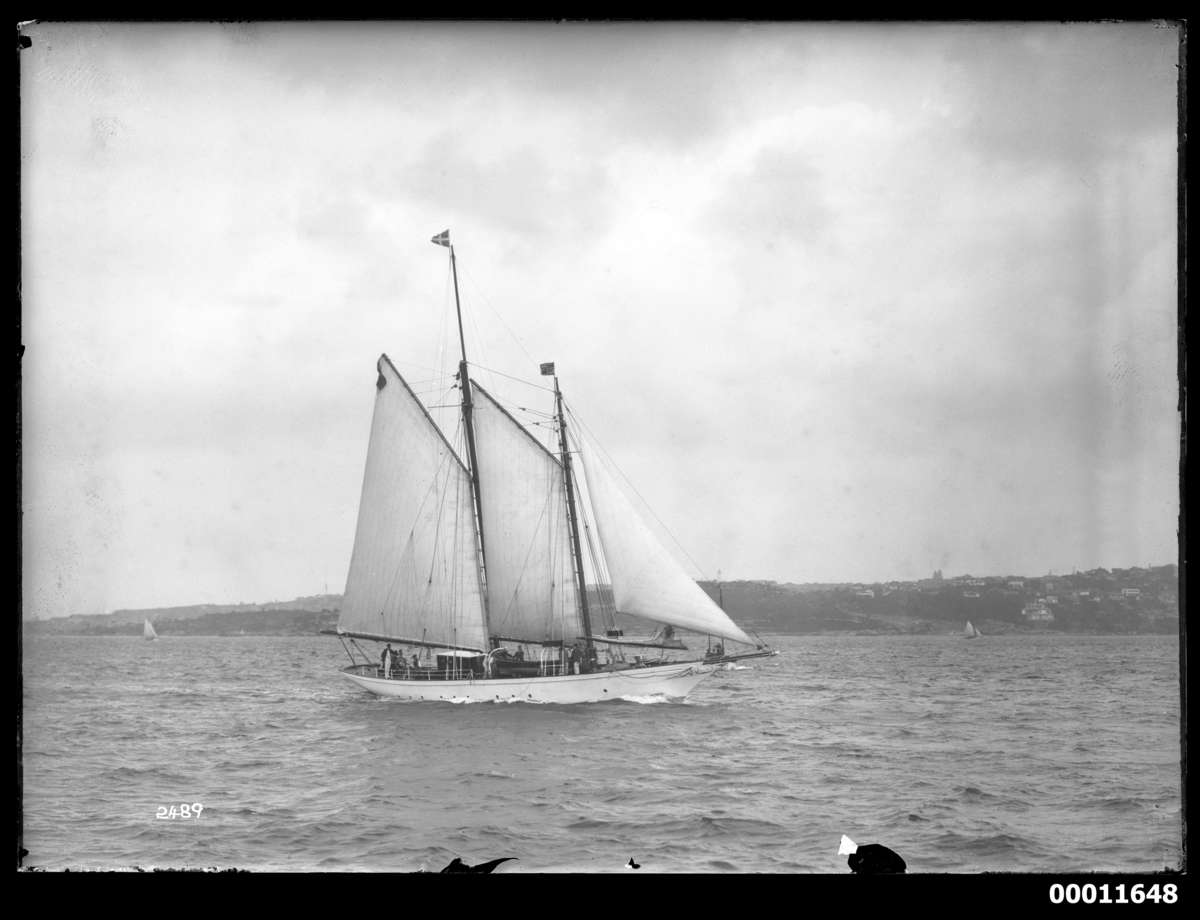 Nicknamed the ‘Gentleman’s schooner’, Boomerang stayed with the Albert family until they donated it to the Sydney Heritage Fleet in 1988. It remains one of the few surviving craft designed by Reeks.

In many ways, Alexis was unlike his father in that he avoided publicity and opted for a more private life. But if there was one area he failed to keep silent on, it was sailing. In November 1930, AMBYM published Alexis’ observations of the most famous race in the sport, that ‘coveted piece of silverware’ known as the America’s Cup. He had travelled to the United States with Frank and Minna to witness yachts compete for what is now the oldest active trophy in sport. Most notably, Alexis shared his thoughts on why the cup had ‘been adorning a shelf in the New York Yacht Club for the past seventy-nine years’:

The only hope that Great Britain or any other country has of lifting the Cup is … to follow America’s example and get a number of wealthy syndicates to build yachts, and select the best one as Challenger. Or, an alternative would be to alter the rules and make restrictions so that both challenger and defender would be practically one design, both in hull, sails, rigging and mechanical appliances.
~ AMBYM, 1 November 1930, p 12

Alexis’ estimations were correct. It would be another 53 years before that prized cup would be awarded to a non-American syndicate. The 132-year American dominance finally ended in 1983, with Ben Lexcen’s Australia II.

After Frank Albert died on 19 January 1962, Alexis continued to advance J Albert and Son, this time with the aid of his son Ted, the fourth generation of Alberts to enter the business. Apart from music publishing, the company also owned several radio stations and in 1954 Alexis became a founding director of Amalgamated Television Services, the licensee of ATN7. Ted’s focus when coming on board had been to discover and foster Australian bands. So in 1964, he established Albert Productions, which went on to sign some of Australia’s most famous music bands including the Easybeats, the Angels, Rose Tattoo and the incomparable, AC/DC. By 1984, Alexis’ two other sons, Robert and Tony had also joined Alberts. Like their grandfather and father before them, Ted, Robert and Tony were all keen sailors. Ted raced his Dragon class boat Rawhiti, winning the national titles twice and representing his country four times at the world titles. He also skippered Steak’ n’ Kidney during the America’s Cup trials in 1986/1987.

In 1988, Ted’s wife Popsy convinced him to see a play that was being workshopped at the Sydney Theatre Company. The play was a light-hearted musical directed by a young NIDA student. That student was Baz Luhrmann and that play was Strictly Ballroom. Ted then approached Luhrmann to collaborate on turning the play into a feature film and for the next two years, they struggled to get the funding for the project. Tragically, on 11 November 1990 Ted died suddenly, before he could see the film turned into a reality. After his death, Popsy ensured the film production went ahead and when it debuted at Cannes Film Festival, the cast and crew stood speechless on the stage after the credits rolled as a standing ovation greeted them from the audience. Strictly Ballroom was nominated for a Golden Globe award and went on to win eight AFI awards and three BAFTAS. It remains one of Australia’s highest grossing films ever produced. The film was dedicated to Ted.

Six years following his son’s death, Alexis died five days short of his 92nd birthday. In summation of Alexis’ character, the RSYS’s Logbook describes him in a way that seems to echo a theme I mentioned in part one of this story:

Lex Albert was a very private person but beneath his reserve was a man of warmth and charm. Dedicated to protocol and correctness, he was nevertheless always approachable and good company. He was the personification of that tradition of the squadron that all members are equal in the club.
~ quoted from Albert, House of Hits, p 126

Alberts continues today as Australia’s oldest independent music publishing house. One hundred and twenty eight years after Jacques established his first shop in Newtown, Alberts is still operated by the family, with Alexis’ son Robert as Chairman and Robert’s son David as CEO. Sailing has continued to be an important part of the Albert family to this day; David is an enthusiastic sailor and Robert continues the Norn tradition, racing his Beneteau 305. As I researched their story, there was one thing, other than the relationship between sailing and music that also captivated my imagination. Like the wings of a bird, Rawhiti and Norn spread their sails and soared across the harbour. As Alexis himself wrote after witnessing the America’s Cup race:

Near the starting line the fleet of assembled yachts was colossal, and as we approached, we obtained our first glimpse of the challenger and defender. They had just dropped anchor after being towed out with sails still stowed, and rode peacefully, like beautiful birds on the still sea, their decks gleaming and masts towering aloft.
~ AMBYM, 5 November 1930, p 12

These days, if you’re lucky and the weather’s clear, you might catch a glimpse of one beautiful bird gliding across Sydney Harbour. Boomerang survives as a symbol in so many ways; she is a symbol of two enduring passions held close to the Albert family – music and yachting.

A big thank you again goes to Robert Albert AO.